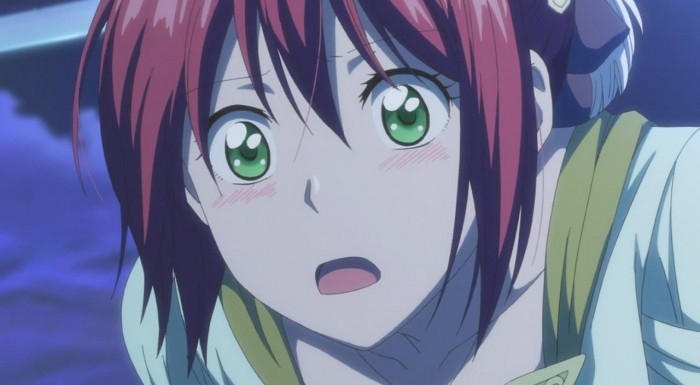 Is this really a Shoujo romance show? I say that, both as a compliment but also as bit of a stab at the direction that Akagami no Shirayuki-hime is veering towards lately. Its been a really odd experience, watching Akagami no Shirayuki-hime change from something that I’d have argued was picture perfect, to something that’s a lot more ambitious but clearly not as polished or graceful as what came before. The story is trying to branch out, to become bigger, better and something more than what it was when it started, whether the audience likes it or not.

At times this new found ambition works to the story’s benefit. There’s a genuine sense of purpose and excitement to everything’s that happening now. Now that we’re out of the awkward diplomatic trip and straight into a genuine crisis, all the characters that we love are rising to the challenge and appearing to be pretty badass (for the most part). 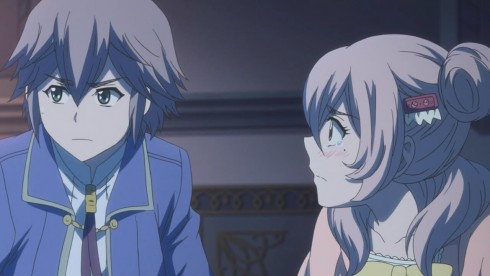 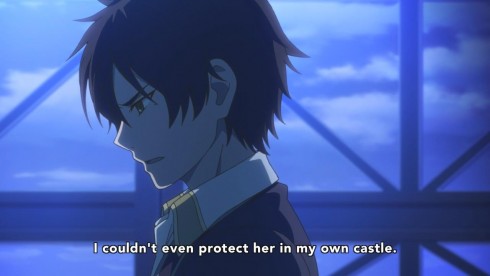 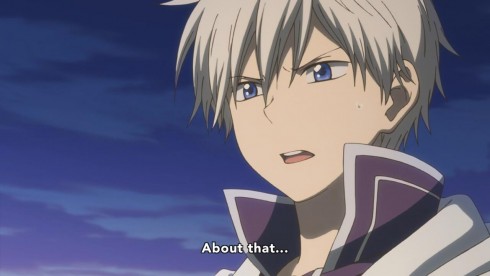 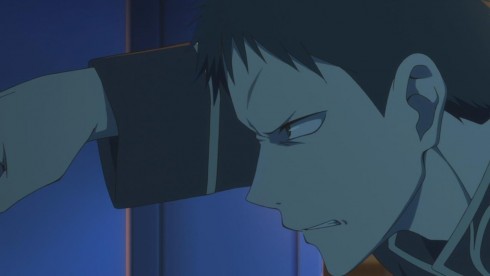 There’s pride, longing, anger, guilt and an earnest resolve to fix the rather unfortunate change of circumstances. Whether its Zen, Raj or Obi, all three of these guys are becoming more daring, more competent. Its fascinating to watch each character react to the current crisis, the crisis of Shirayuki’s capture, in starkly different ways.

Zen is adeptly maneuvering around all the political red tape and getting his posse together. Raj is becoming less and less of a coward and more of an actual leader and Prince. And Obi is a force of nature at the moment, making up for his initial mistake of letting Shirayuki get captured in record time. What I like the most about this new problem that the entire cast is trying to come to grips with, is that it really is banishing the less likable parts of the story into the background. 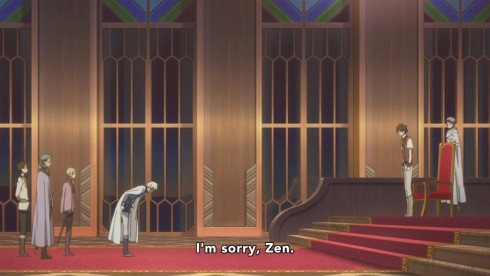 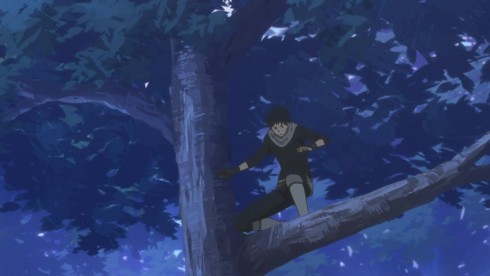 No one has the time to brood over their feelings for Shirayuki, nor are any characters acting like prats or selfish jerks. Everyone’s united and focused on the purpose of getting Shirayuki back, come hell or high water.

And I’ll give the show credit, it also manages to throw in some organic world building into the mix. We get our first look at an actual King, Raj’s father. The king of Taubarn is actually quite likable and seems pretty noble and fair for the most part. Its unclear what his beliefs about his country are, and there is the question of why he gave Raj so much free reign but… At the very least the show is filling a rather gaping hole in its world building. Kings exist, and its not just princes who rule over these countries. 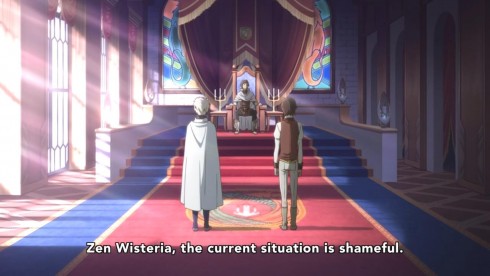 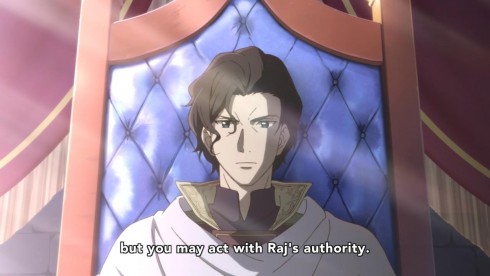 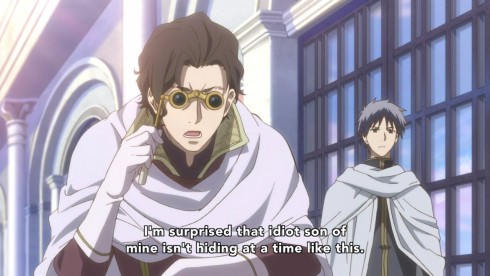 Which means… Clarines also has a king, and Zen and Izana have a father and ruler that they answer to as well. This little development makes a lot of sense, but it’s also a very clear sign of the growing pains that this show and story are going through.

Kings and this whole political system was not something that was introduced in from the get go, nor was it hinted at. As the world and story of Akagami no Shirayuki become bigger and wider, Akazuki-sensei is having to retrofit in some more obvious elements to make everything believable and cohesive. The fact that its noticeable is unfortunate, but I think the payoff and potential story lines later down the line will be ever powerful. So I support this particular move, even if it isn’t all that gracefully executed. 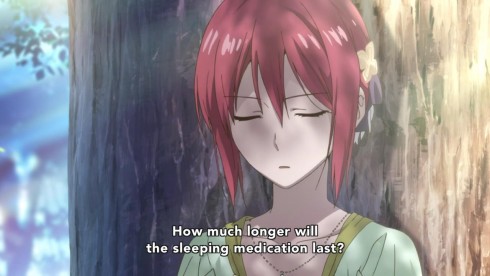 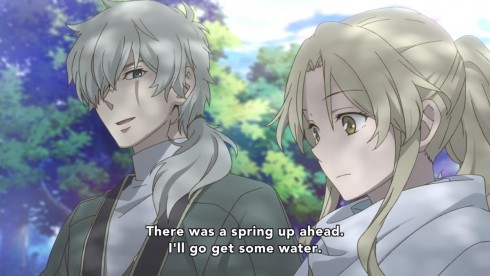 The other thing that Akagami no Shirayuki is adding in to the mix, is something that’s been long needed by the story; villains. Now before you go ahead and shout Izana and Mihaya’s names at me, I don’t think those count. Characters like Izana, Obi and Mihaya were never meant to full on antagonists to the story, but rather just barriers and people that Zen and Shirayuki had to overcome and win over to their side.

I never, once, ascribed to the belief that the biggest problem to Zen and Shirayuki’s being together was ever Izana. Izana, for all the hate and mistrust he gets, is actually on their side, if only partially so. Its something we’ve all discussed in the comments to death, but Izana’s intentions were probably to put Shirayuki and Zen in a better position for whatever it was they were going to do. There was probably also the motivation of testing Shirayuki a bit, but given Zen and Izana’s position, I didn’t find that unreasonable, even if a bit unsavory. 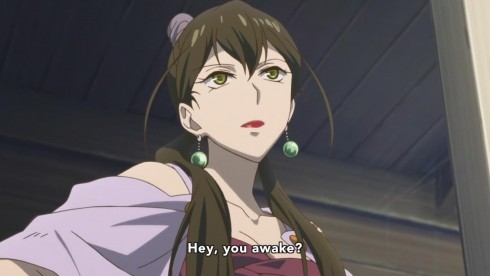 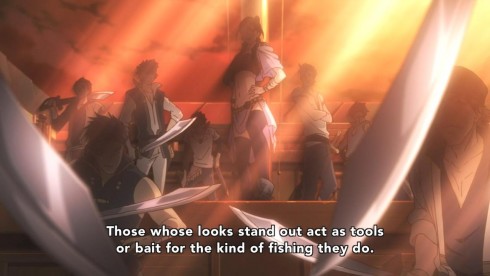 But now, with the woman called Umihebi (Sea Snake) and the pirates known as “The Claw of the Sea” (No way I know the romanji for that word XD), we have some actual bonafide villains for our heroes to go against. And unlike Kazuki and Itoya, she’s actually not all that likable, nor does she seem like some kind of misunderstood ally. From what it seems like, Kazuki and Itoya are probably part of whatever lost family Shirayuki has.

That’s my guess anyway, but from the mention of “home” and the mountains, its not hard to put to and to together. Again, this feels like some kind of after the fact retrofitting, but I’ll take it. I’ve always been curious about Zen and Shirayuki’s roots and origins, and if this arc leads us to that, then I’m all for it. 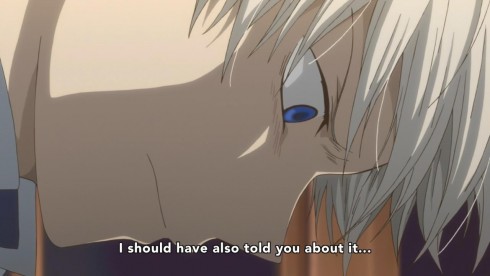 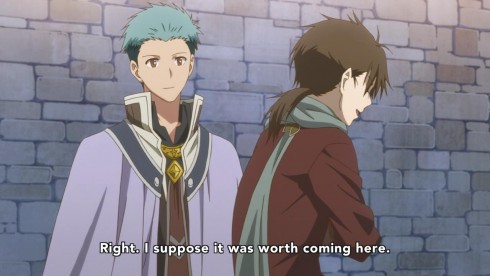 Don’t get me wrong though, while this episode was good, and a step in the right direction in a lot of ways, there are still some very glaring issues here. For one thing, its just hard to ignore how hamfisted and inorganic all these new story elements really are. One of the reasons for that, is obviously because of the first cour and just how gracefully it developed everything. That grace is gone, and replaced with a more brash but powerful and raw storytelling style.

It feels a lot more like Akagami no Shirayuki started as a beautiful and cute love story, and then half way through, Akazuki-sensei realized that she wanted to do more with this world and these characters she had created, and shifted focus to accommodate it all. The other problem, and this is perhaps the reason why I dropped the grade down to a B+ is because of how Shirayuki’s being treated here. 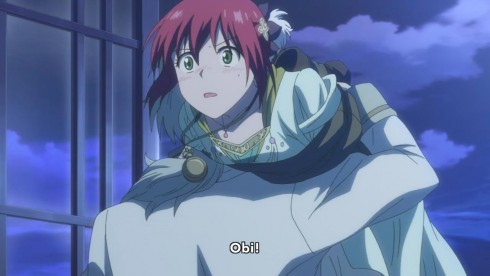 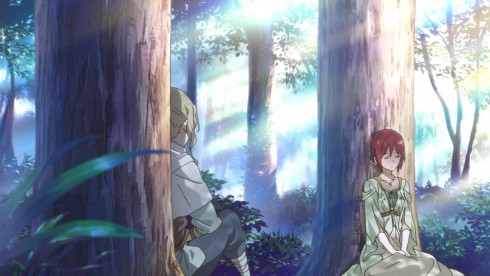 Simply put, Shirayuki is acting a lot more like a damsel in distress, more so than she ever was. She’s emotionally weak, confused and being led around by the tides rather than actively resisting them. You could make an argument for how the situation happened too fast, or how Shirayuki was preoccupied with losing the watch Zen gave her or what not but… Those all just seem like excuses to me.

Shirayuki is the kind of girl that handled herself with such daring and bravery when she was captured by Mihaya, and she’s also proven herself to be a strong and independent person since the start of the story. But here? The story has her captured unable to do anything, and then proceeds to have her confused and cry under a bunch of sheets when Umihebi does show up. 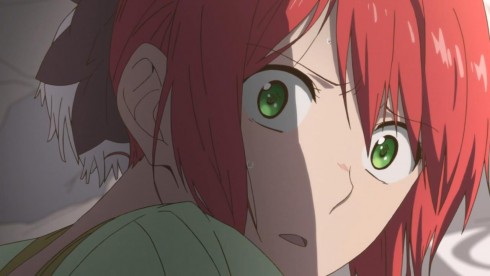 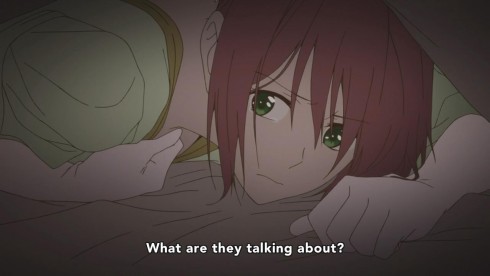 There’s no defiance, no power or strong will for the girl here. The Shirayuki I used to know and admire, and love as a character, is gone. Because the Shirayuki of old wouldn’t have taken any of this lying down. The old Shirayuki would’ve been ready to go the second she woke up and would’ve done something to fix her situation. Rather than just sit there and watch bewildered.

That does bother me, because its another sad case of the plot and the story superseding character agency. A good story is one where the events that the characters find themselves in, give them a chance to shine and prove themselves. Nothing about this particular scenario shows off Shirayuki’s agency and independence, and its all about Raj, Zen and Obi coming to rescue her. 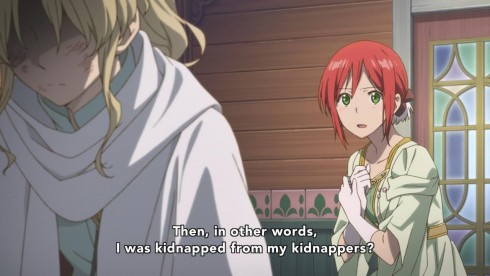 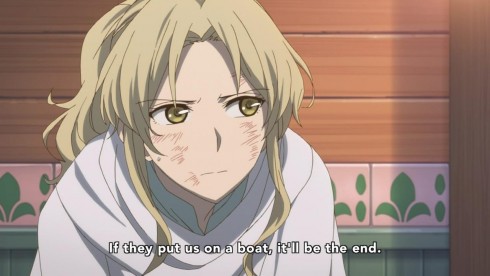 That’s a very stark change from everything we’ve seen from this franchise. Its one of those things that really does stick out and bother me personally. My hope is that this simply a temporary hiccup, and that the story will have Shirayuki get back to being who she is soon enough. Hell, I’m confident that it will happen, but its still a sore point for me in this episode.

The final thing I’ll nitpick, if only because I praised it last week, is the actual animation for the show. I’ve long since said that Studio Bones has done an exceptional job with the production of this show, so imagine my surprise when the second Obi Itoya tussle ended up looking so… ugly. There’s no other word for it, the frames were just badly drawn, the animation jerky and there was a clear limitation of production budget there. This is really the first instance of the animation being anything other than excellent, so I guess that makes it all the more noticeable. 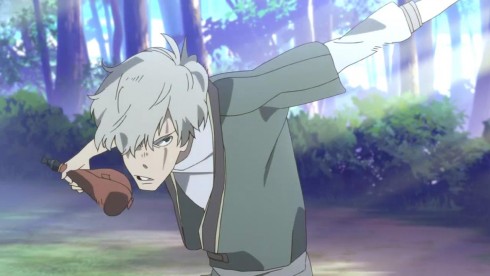 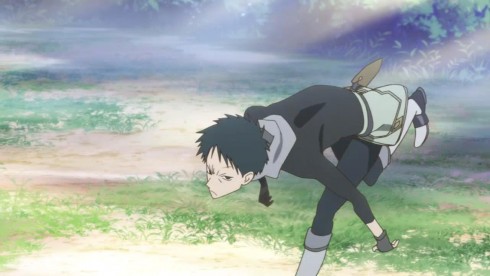 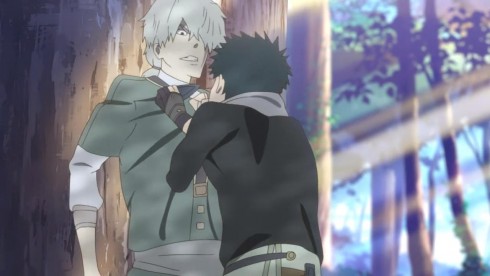 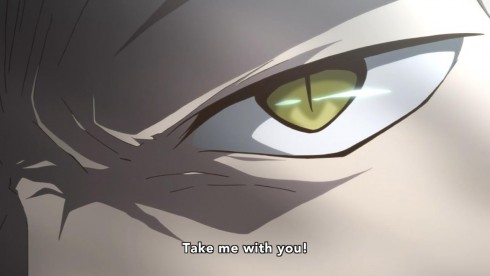 So, in the end, I’d say that this was overall a better episode than the last few. It got the ball rolling, it trimmed some of the fat from the story and it focused everyone’s attention to a conflict that matters. It wasn’t the most graceful transition, and a part of me still wonders why my calming shoujo romance anime has suddenly become a fantasy adventure thriller but… It is what it is. Akagami no Shirayuki is a different show now, and I suppose I’ll just have to start judging it from that perspective.

The show isn’t going to be perfect, because its going outside of its comfort zone and trying to be more. I might not like everything about the results from that decision, but I do respect the decision itself. You do you, Akagami no Shirayuki (and Akazuki-sensei), and I’ll continue to see how it all goes. 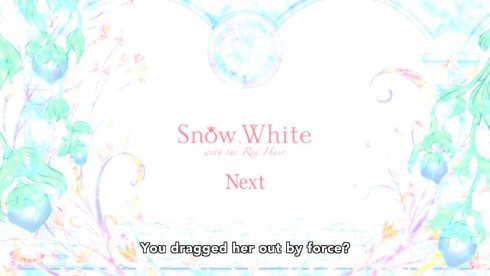 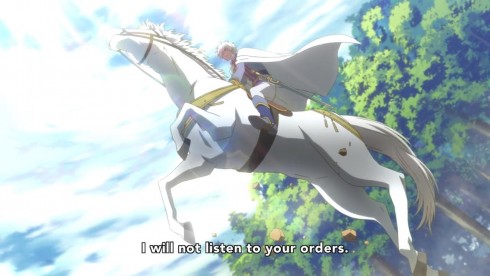 Zen and Shirayuki continue to deal with the challenges on their ends. See you all next week for more hurt XD