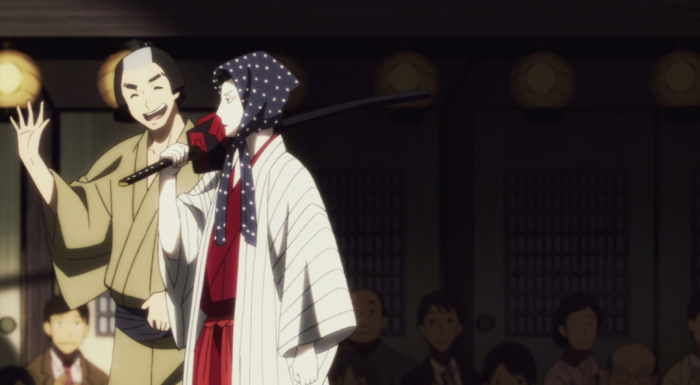 Has there ever been a series with as much unabashed love for performers and performance as this one? From the many rakugo stories to the bursts of shamisen music to this week’s low-budget kabuki play, Showa Genroku depicts Japan’s classic performance arts with a careful attention to detail and a fierce respect for the mediums.

Yet the series never lets itself slip into rose-colored nostalgia; rather, like the rakugo-ka who preserve the tales of Edo (and therefore its lost world and the flawed people who lived in it), Showa Genroku seeks to capture with the same blend of affection and honesty a time, place, and people who no longer exist. And it accomplishes this the same way humanity so often has: Through the telling of stories.

Since the premiere episode, we’ve been constantly dealing with multiple levels of framing, perspective, and performance. This week we have a kabuki play filtered through the eyes of a young Kikuhiko which is, in turn, being filtered through the story of a much-older Yakumo. It’s noteworthy that the voice of our actual storyteller is entirely absent this week, leaving the internal monologues and limited narrative to his younger self. Like the rakugo stories that begin with distant exposition before dropping their audience into the immediacy of the characters’ dialogue, we’ve settled fully into the world of our story-within-a-story at this point. This is no longer Yakumo’s tale, but Kikuhiko’s. 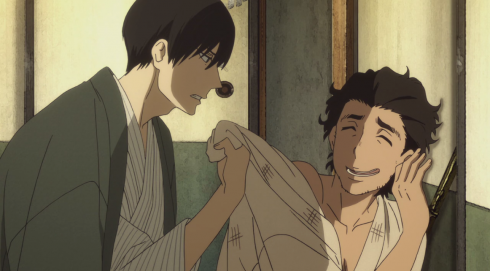 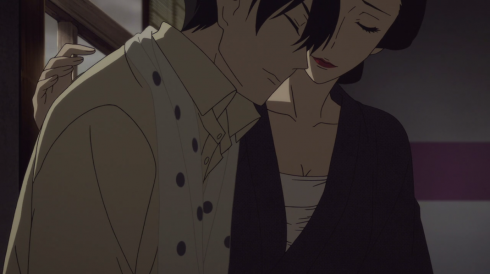 This episode is loosely divided into two halves: The private and the public. Away from the eyes of audiences, we see Kikuhiko interact with intimacy and honesty, first with Sukeroku and then with Miyokichi. While the two scenes sharply contrast in tone and pace—lively and combative versus pensive and playful, in essence—both take place in small, cozy rooms that allow Kikuhiko to voice his building frustrations and doubts.

Much of last week’s tension subsides this week, thanks in large part to these conversations, particularly when Kikuhiko admits to the “unfairness” he feels about the rift between his own hard work and Sukeroku’s success. While Sukeroku has a tendency to rub me the wrong way (his “give me a taste of that [referring to Miyokichi]” is a realistic but thoroughly unpleasant bit of casual objectification), he at least shows that he’s aware of Kikuhiko’s worries and wants to do what he can to help.

Aside from the (very funny) charcoal-flinging scene, Sukeroku also cheerfully bullies Kikuhiko into playing the lead role in their futatsume-only play, despite Kikuhiko’s insistence that it’s “too much” for him. Miyokichi is also more than happy to help, and their dual enthusiasm serves as a human support structure not unlike his “good luck charm” cane. Kikuhiko might be able to move without it, but he feels more comfortable with it nearby. 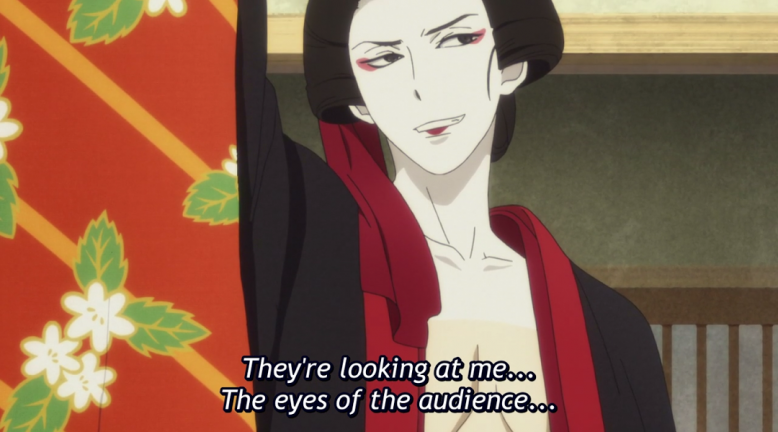 The encouragement in this first “private” half of the episode leads to the second “public” half, as Kikuhiko takes the stage as the “woman” Benten Kozo and finds himself engaging an audience in a way he never has before. One of the great strengths of the performances in SGRS is how we don’t view them from an audience perspective so much as from the actor’s perspective of the audience. When Kikuhiko bombed in Episode 2, we felt the audience’s boredom, but we felt it not as “boredom” but as increasing dread and anxiety; i.e., we felt what Kikuhiko felt.

The same is true here, only this time the emotions are excitement and growing confidence. For all his pessimism, Kikuhiko loves the performance arts almost as much as Showa Genroku itself does, and that’s on full display here. This is accomplished partly through excellent musical selections and key bursts of inner monologue, but largely through attentive shot selection. 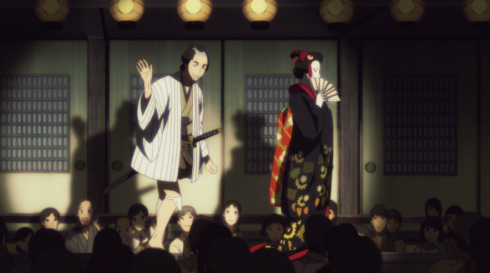 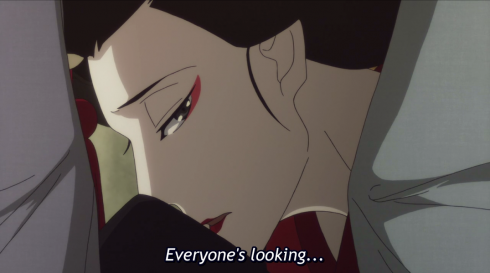 We see the subtlety and growing comfort of Kikuhiko’s performance through close-ups; the audience through Kikuhiko’s eyes; the stage from an angle just above the seats, suggesting it’s the way Kikuhiko imagines it looking from afar rather than how it actually looks. This is not how a play feels, but how a play feels to a single actor, and it keeps these SGRS performances engaging and accessible on an individual level even when the performance itself might be unfamiliar to us. 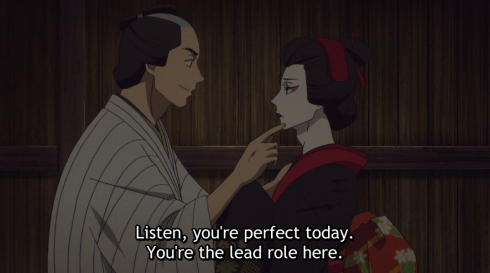 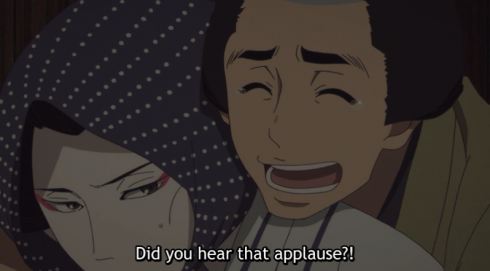 That said, what’s so fascinating and ultimately uplifting about this episode isn’t the fact that Kikuhiko finally gives a spectacular performance, but why he does, which is very simply that he at last plays to his own strengths—not the aggressive “masculinity” embodied by the other rakugo performers (and expected of men in general), but the poised “femininity” that comes more naturally to him.

The shoujo/josei genre is at its best when its exploring and challenging gender roles, and that’s been laced through Kikuhiko’s story from the start. He was raised to dance in a geisha house. His injury kept him from going to war. His mannerisms are more graceful and less bold than the men around him. His relationships with others, particularly women, are based in emotional rather than physical attraction. Regardless of how you choose to read Kikuhiko’s sexual identity (I’m inclined to see him as being attracted to men and women in equal but different ways, but there’s cases to be made for other interpretations, too), it’s clear that he neither fits the stereotypical idea(l) of “manliness” nor is comfortable pretending that he does. 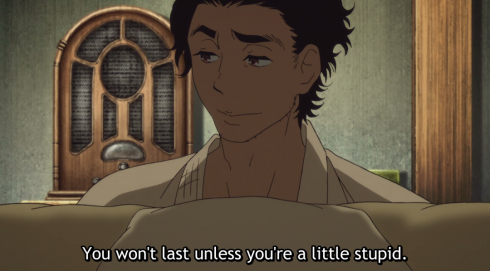 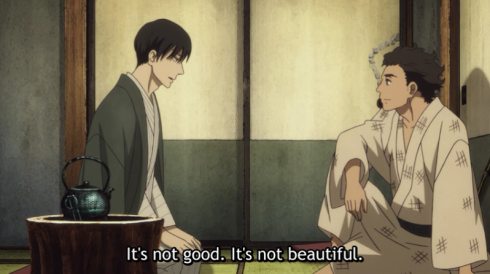 Kikuhiko himself is acutely aware of and frequently embarrassed by his own lack of traditional masculine traits, particularly in the brash, bawdy world of rakugo. Fortunately, the people closest to him (and, by extension, SGRS itself) accept it wholeheartedly, seeing it as a part of his personal charm and a potential asset to his career. His performance in drag isn’t played as a “man-in-a-dress”-style joke, but as a positive way for him to present himself to the public in a manner he hasn’t before.

It’s an act, yes, but it’s also more honest than any of the performances he’s attempted prior, and the audience responds to that. SGRS is looking more and more like a series that’s about the importance of finding one’s own voice and not worrying about fitting into any prescribed “boxes” expected by society at large. The series also argues that these differences should be actively encouraged, as they provide variety to society and, specifically, to rakugo, enriching the medium in new ways.

Sukeroku has boundless energy and a great sense of comedic timing, but there’s little subtlety to his performances, as demonstrated by the over-the-top falsetto and caricatured motions of his female characters. He’s an exceptional talent, but he has his own limitations, too. What Kikuhiko can (and one day will) bring to the medium is a kind of hypnotic elegance that comes from restraint rather than raw power, something wholly different from his friend’s and master’s styles. That it’s Sukeroku and Miyokichi who sense this and encourage it just shows how well they both already know him, how important they’re going to be for him going forward—and how much it’s going to hurt when they are inevitably lost. 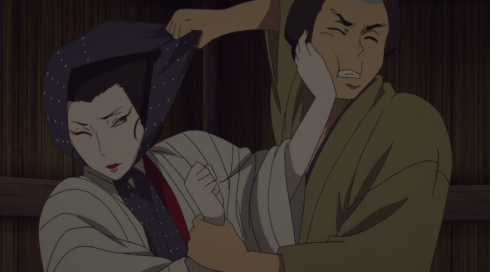 It would be all too easy for me to turn these posts into 1000-word historical/artistic annotations and line notes, but I’d like to avoid doing that because (a) it’s more fun for me to interpret the fictional than explain the historical, and (b) I believe SGRS does a good enough job of showing the audience its world in a way that makes sense in the general even if we don’t know the particulars. I am happy to (try to) answer any questions in the comments, though!

That said, there were a lot of historical/cultural specifics this week, so have a few quick bullet points: