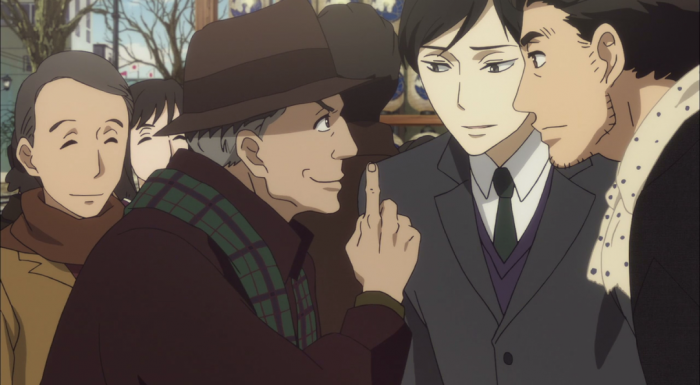 If the past two episodes were about building the bonds and demonstrating the importance of Kikuhiko’s makeshift rakugo family, then this one is about showing how those bonds could one day unravel. Yakumo’s story has always carried a strong undercurrent of longing and melancholy, but this is the first time we’ve really felt a creeping sense of dread, that we’re on the roller coaster ramp climbing to an inevitable fall. We’ve known it was coming since we got in line, but that’s not gonna make the drop any easier.

I am more and more finding myself overwhelmed with how much I want to discuss and analyze with this series, particularly in how lots of individual scenes or interactions accumulate to create central moods or themes. This week the Big Topic is that “sense of unraveling,” but it comes through in a lot of separate, subtle ways that don’t always have easy segue ways. In the interest of coherency I’ve decided to compartmentalize with section headers for now; we’ll see if this (and the absurd word count) continues into the coming weeks. 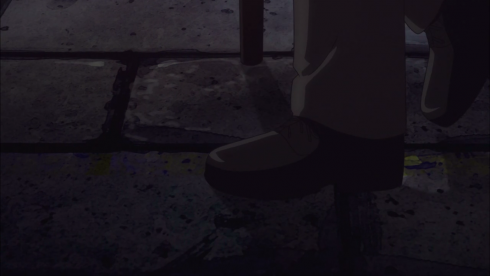 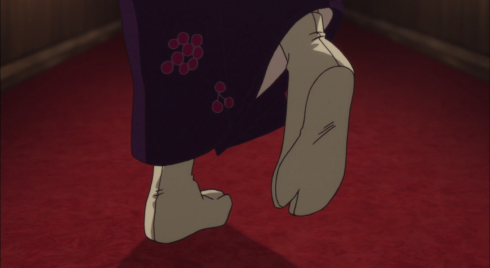 Performance has always been a major part of SGRS, but that focus expands even more than usual this week, as we’re shown not only another rakugo story, but also a kabuki play and a geisha’s kouta song. The camera does good work focusing on the same body parts and movements for Sukeroku and Miyokichi—the seiza posture, the shifting feet, the subtle hand motions—to draw parallels between rakugo-ka and geisha, reminding us that both are, in essence, practicing a performance art. We are made constantly aware that our cast is full of actors, experienced with donning masks and shifting personas. And, it turns out, with lying, too.

The master has a secret mistress. Sukeroku doesn’t want to tell the master that he plans to hold a rakugo show as a mid-ranking futatsume, without a shin’uchi (the “master” rank) to headline. Miyokichi suggests Kikuhiko not tell the master about their meeting. Even beyond the outright lies there are the unspoken secrets too, like Sukeroku (unconvincingly) feigned disinterest in Miyokichi, or even why Miyokichi decided to pursue Kikuhiko in the first place. It’s possible she’s being as straightforward with him as he is with her, and that she’s genuinely interested in him because she finds him attractive, or because his background as a dancer gives them a common interest, or because he treats her like a person instead of an object. But we just don’t know for sure. 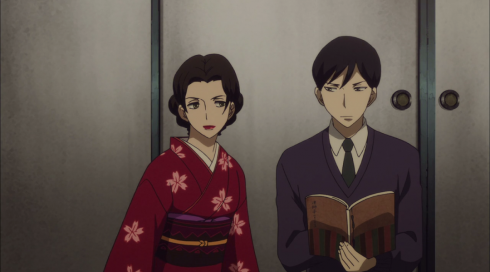 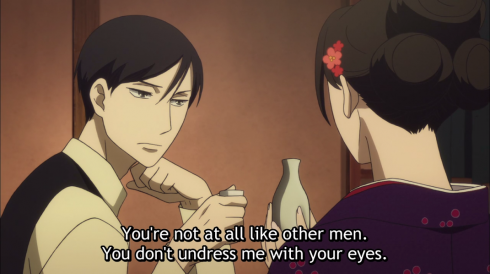 In essence, SGRS is sliding us into the mindset of our narrator, limiting us to his impressions and assumptions as he, too, discovers the secrets being kept and struggles to understand the people around him. Kikuhiko is himself uncomfortable with dishonesty while also being well aware of the masks that some performers so easily wear, and so we’re made to feel his growing skepticism and uncertainty, even as he finds himself drawn to his master, Sukeroku, and Miyokichi in equal turns.

Part of the challenge and appeal of a first-person narrative is this limited perspective—that we as an audience can only know as much about the other characters as our storyteller does. We really feel those limitations this week, as the inability to know other people’s “true” feelings packs even the most relaxed of scenes with hesitation and unease. 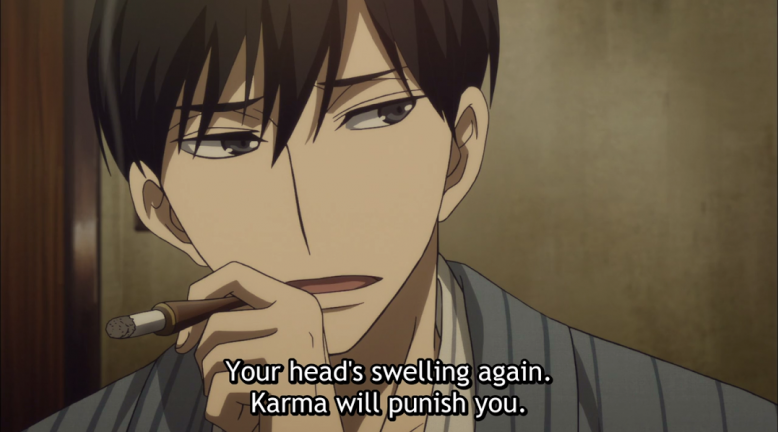 Look, SGRS, we already know this is going to end in tears, you don’t have to rub it in our faces.

Things between our main pair begin smoothly enough, with a playful back-and-forth between Kikuhiko and the newly renamed Sukeroku, as they talk about finances, the importance of appearances, and their futures in rakugo. There’s a rolling rhythm to their dialogue that feels like a rakugo performance itself (or maybe a manzai comedy routine), as well as an easygoing affection between the two (just count how many times Kikuhiko casually touches Sukeroku during their stroll) that makes them seem more like an old married couple rather than friends or siblings. There’s none of the sexual energy we’ll later see between Kikuhiko and Miyokichi—no lingering touches or nervous tension—but it’s a deeply intimate relationship all the same, difficult to define with any one label. Whatever you want to call it, it’s obvious how much they care for each other. 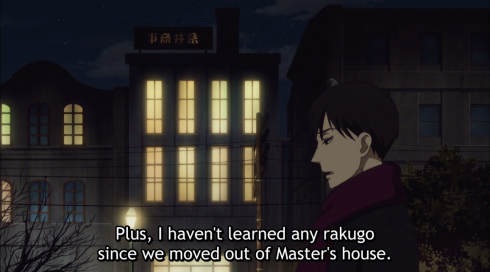 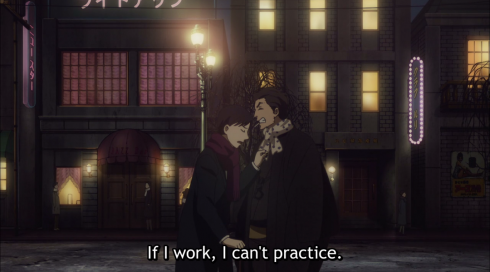 And yet even through this friendly exchange there are rumblings of potential conflict. For all Sukeroku talks about Kikuhiko’s job functioning as “training” that will help him with his rakugo (by improving his public speaking, one assumes), the fact of the matter is that Kikuhiko is working to pay both their living expenses while Sukeroku is free to focus on rakugo, performing in more shows and gaining valuable experience. Whether intentionally or no, Sukeroku is taking advantage of his friend, and as much as Kikuhiko admires Sukeroku and his rakugo, his displeasure about this setup is genuine, too.

There is a small but ever-present power imbalance between these two, as Sukeroku is financially dependent on Kikuhiko, but Kikuhiko once again feels like he’s falling behind in terms of rakugo skill and prestige. Those are the kinds of little cracks that can grow into full-blown rifts if not addressed. 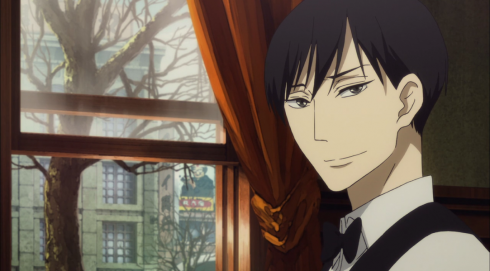 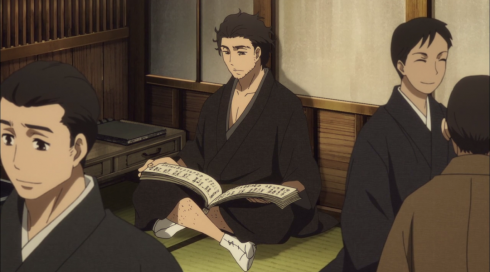 Part of what we’re seeing this week between Kikuhiko and Sukeroku is, despite the story’s specific setting, a very universal process: Young people trying to move from childhood to adulthood, and the unevenness of that process. The two also have very different approaches to this process, and their changing relationships with their master does a superb job of highlighting it.

Kikuhiko is the upright, responsible young adult, financially independent but still respectful and subservient to his master, keeping the name he was given and meeting regularly for rakugo instruction. Sukeroku, on the other hand, declares his independence by changing his name, skipping out on their practice sessions, and speaking to his master more as an equal… but when it’s time for some spending money? Then he’s all about that teacher-student bond. 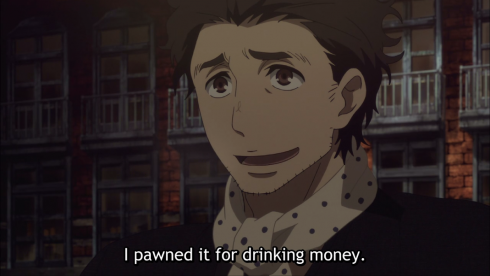 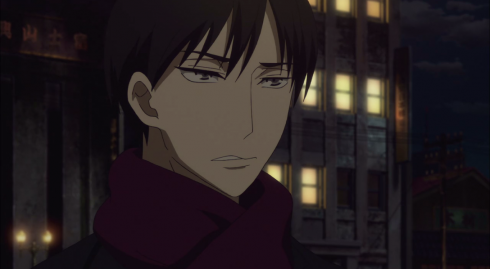 As a “Kikuhiko-type” myself, I’m inclined to sympathize with our protagonist and cluck my tongue at his rival, but (as the master points out) rakugo is about energy and flaws and finding your own voice, something Kikuhiko will struggle to achieve if he keeps quietly living in his master’s shadow. Yet still he does it, for the same reason he keeps supporting Sukeroku even though it’s crippling his career, and possibly for the same reason he chooses to meet with Miyokichi: Kikuhiko desperately needs to be needed.

The Problem with Perfection 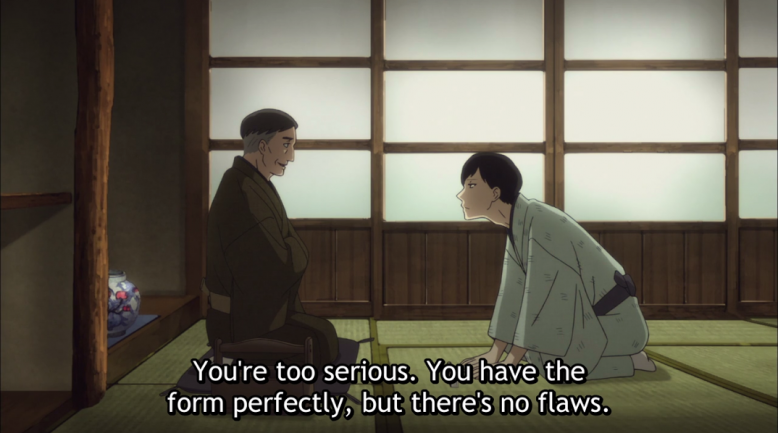 I am consistently impressed with the way SGRS develops its characters implicitly, through a multitude of events and experiences, rather than relying on explicit inner monologues or conversations. It trusts its audience to draw lines between previous scenes and current ones, to see what’s happened in the past and then map that information onto the present-day to better understand why someone would behave the way they do.

While the subject never directly comes up this week, the past two episodes showed us Kikuhiko’s grief at being abandoned and his constant fear that it would happen again if he couldn’t live up to the expectations of those around him. We’ve seen how badly he wants to be wanted by others (and how loyal he is to those who stay with him), and so we can see how that one-two punch of fear and desire would drive his actions into adulthood as well.

His constant striving for “perfection” both in rakugo and adulthood speaks to a deep insecurity about his personal worth, as does his willingness to care for others. For all his complaints, he clearly enjoys mothering Sukeroku and teaching Miyokichi, because it gives him a sense of value and assures him that they won’t leave him, too. (Which is, by the way, SO SAD and just…like…fistbump of solidarity, Kiku. I so know that feel, bro.) 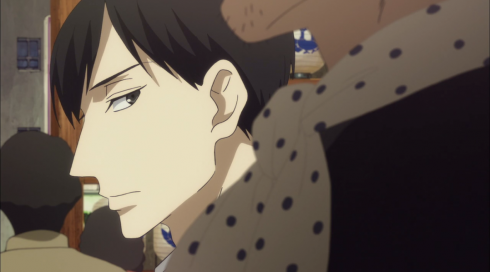 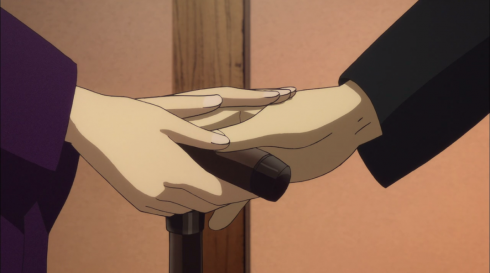 Kikuhiko wants to be everything to everyone. He wants to be the model student, the flawless performer, the responsible roommate, the supportive friend, the helpful dance instructor, the respectable gentleman. He doesn’t want to keep betray his teacher or upset his friend, but he’s also interested in Miyokichi (understandably so) and doesn’t want to turn her down, either. The problem, of course, is that you can’t be everything to everyone, because people’s wants and needs—including your own—often conflict with or contradict each other. It’s why that final scene with Miyokichi is laden with so much anxiety: Because Kikuhiko knows he can’t make himself and Miyokichi and his master and Sukeroku happy at the same time. He has to choose.

He just spent an entire episode taking care of others. That he finally chooses himself should be a good thing. It should be. And yet that tragedy coaster just keeps climbing up that hill…