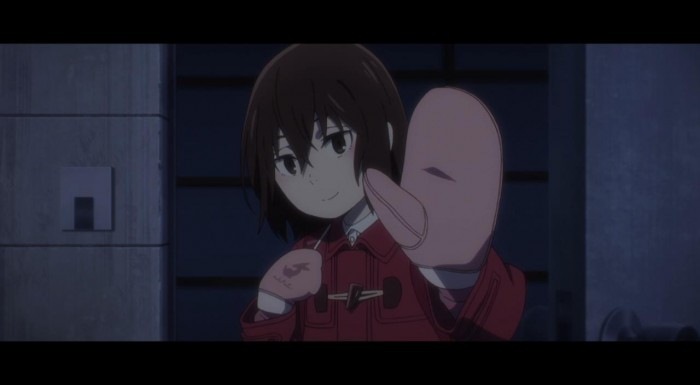 There’s a saying that goes something like: “If its too good to be true…” Yeah, I’m sure you’ve heard that one before, and boy does it just fit this episode to a T. Clearly, things weren’t going to be that easy for Satoru, and the great thing about this episode, is that it clearly knows that the audience expects that, and uses it squarely to its advantage. That kind of play on the audience’s expectations? Well… that’s just masterful storytelling right there.

If there’s one commonality between each episode of Boku Dake no Inai Machi that we’ve seen thus far, its that they’re all so deeply engrossing and captivating. Throughout each episode, there’s just a sense of being really glued to everything that’s happening on screen, and anticipating, wondering but at the same time never being quite sure about what’s going to come next. But, what’s truly remarkable about each of these four episodes that we’ve seen, is that they’re all attention grabbing episodes for different reasons. 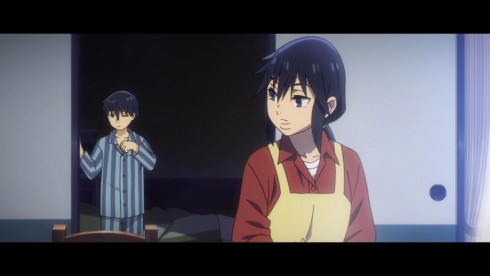 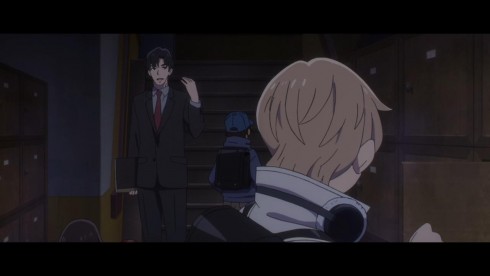 Episode one was the killer opener, episode two was the big introduction to the past and Kayo, episode 3 was all about Kayo’s horrible situation, and episode 4 was about Satoru actually coming face to face with X-Day, and failing to save her. And yes, while the result is devastating, and may even be a bit predictable, its how the episode leads you TO the conclusion that makes all the difference.

See, in episode 4, things are actually going really well for Satoru and Kayo. Satoru is able to save Kayo from her abusive mother and grant her a reprieve from the abuse, his mother and friends are there to support him. He grows closer to Kayo, and there’s a genuine sense of happiness between the two of them. Deny it as he may, And I think FlareKnight over in the comments last week said something to a similar effect, but man, is Satoru just pulling the moves on Kayo, and looking darn good while doing it. 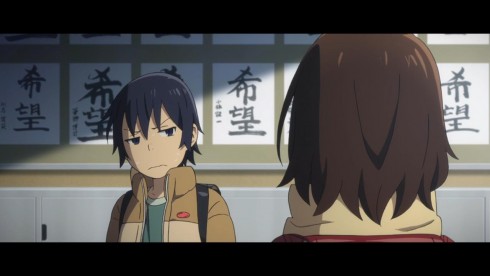 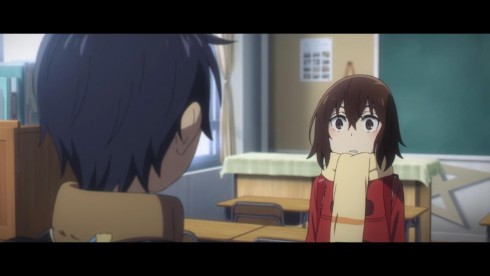 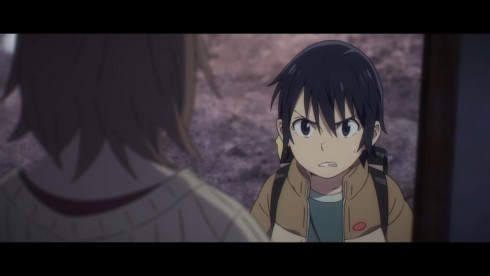 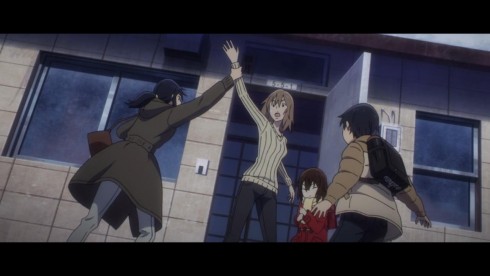 And while Satoru and Kayo grow ever closer, and things generally start to go well for the two, you just can’t help but feel a tinge of happiness yourself. Its such a contrast, from last week, where Kayo’s situation felt so hopeless, so utterly mortifying, and here? Here it seems like things might actually be okay. There’s a genuine sense of relief that happens, right after that confrontation Satoru has with Kayo’s mother.

For all the credit I gave Satoru last week, I give him more for throwing caution to the wind and just going for trying to save Kayo. See, there comes a point, where you just can’t take it anymore, and I’d say Satoru and the audience, were past that point an episode ago. So to see Satoru just stand defiant and DO something about it all, that was great. Then his mom coming in and completely saving the day in the cool mom like adult way that she did? That was just the icing on top of that deliciously satisfying happy cake. 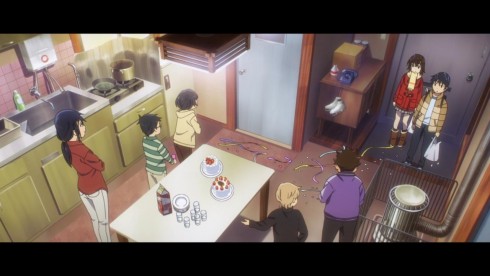 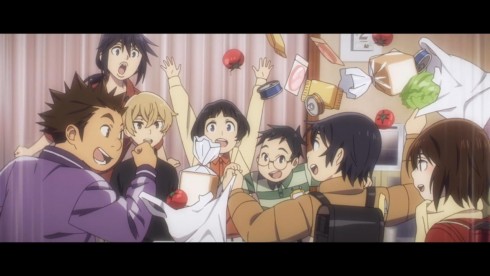 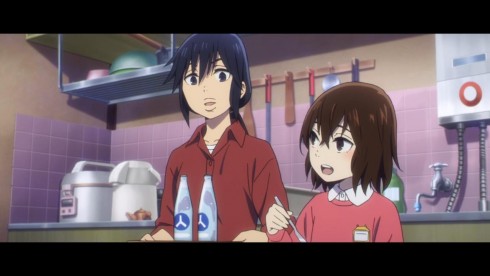 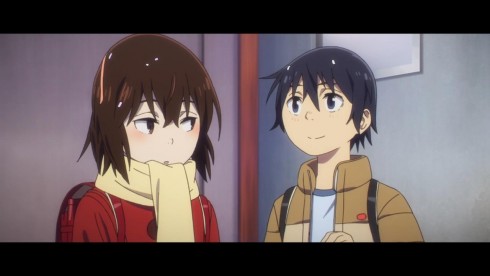 There really was a sense of family to the whole group afterwards. Kayo become a close friend of Satoru’s, his friends were there, and they had that Birthday party. And through all of that, the show beautifully used one of the most powerful aspects of its premise, the fact that Satoru is back in his past and fixing it. The little scenes we got, peppered in throughout the happy times that Satoru had, both with Kayo and his friends, were just exceedingly well done.

They showed, that Satoru was really being given a second chance, and he was making the most of it. For anyone who’s even been nostaglic about their past, or wanted to go back and do some things all over again, well… This whole episode was littered with moments that just played off that inherent fantasy that I’m sure many of us have. 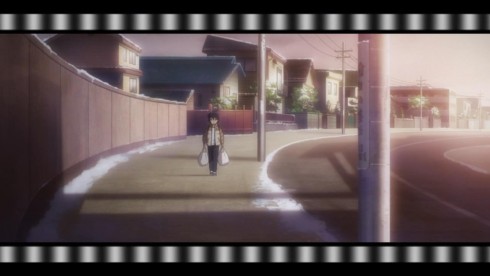 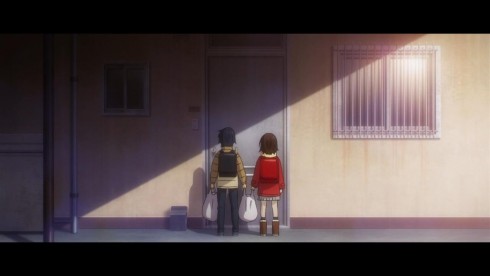 And the reason the fantasy works, I think, is because Satoru has the wisdom, the guts and the emotional and mental strength of an adult, even if he’s not the most socially calibrated person himself. The “mistakes” he makes, by rather bluntly admitting to Kayo multiple times that he’s interested in her, he does follow them up pretty smoothly. A normal child, if they blurted out something embarrassing like that, well, they’d be ashamed and run away or just act all weird about it. There’s an inherent maturity to Satoru’s actions, that could only have come with age and experience.

That idea, just working, is a credit to the writing, the dialogue, the animation, the voice work, everything. Its all there and its all just coming together in this beautiful package that makes it all so believable. Satoru reflecting back on the previous version of his past, and comparing it to the current one? Those scenes are powerful, and how they playoff as kind of visions, or flashbacks, right in the moment, they just sell the idea through and through. 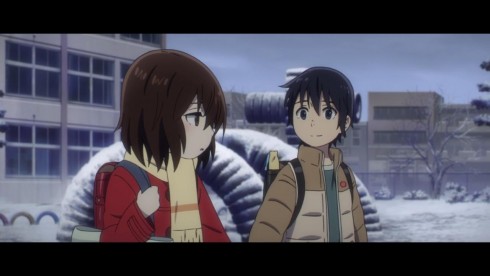 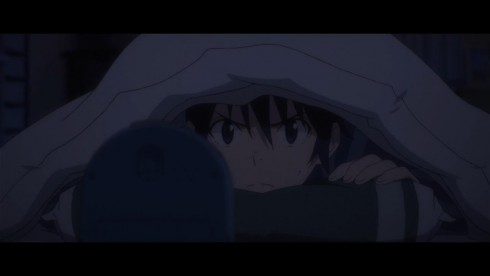 But… And there is a big but (Err… Umm… Yeah…), all the while this awesome stuff is happening, when it seems like Satoru is winning despite his own doubts, there’s a sense of clear and pure dread that just hangs in the background. There’s just this wait, this wonder for: “Okay… When is the other shoe going to drop?”

And its that sense of dread, that sense of wonder for what IS actually going to go wrong, that just keeps the engagement going throughout the episode. And you never are sure, are you? Is Satoru going to fail? Is HE going to get killed? Is the future going to be worse off than it originally was? Will his mother get killed instead? 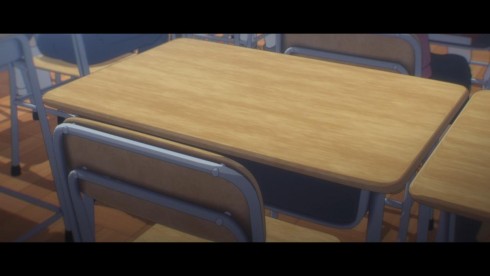 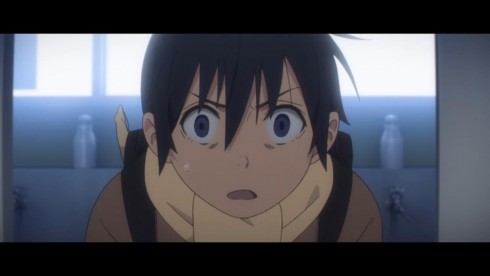 The answer, to all those questions, is actually a lot more simple, and a lot harsher because of that. No, nothing bad happens to Satoru, nothing happens at all. The fated X-Day, comes, and goes, and Satoru is able to make some great memories with his friends and Kayo, but what he is not able to  do, is change Kayo’s fate. Like clockwork, the next day, Sayo is gone, and with the last bit of chilling narration, Satoru confirms the sad truth… She’s gone for good.

Does that hit you? Oh God does. It hits hard and fast, and before you even have time to process it, the episode ends. I’m not sure if you can call that a cliffhanger, but it is kind of a powerful and painful moment to end on, isn’t it? Because, At the end of the episode, we’re left with so many pressing questions. 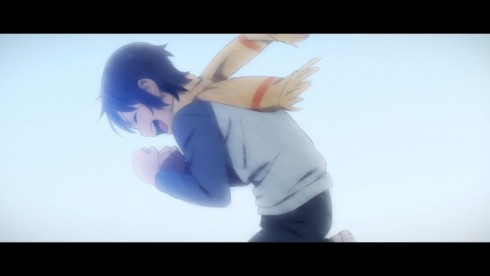 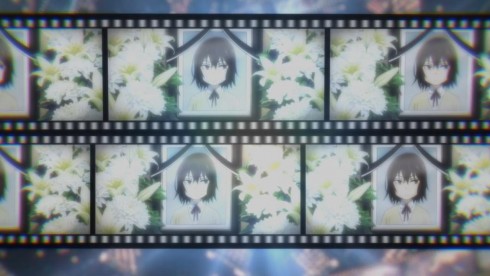 What did Satoru did wrong? Did he do anything wrong? Was Kayo even a victim of these murders? And more importantly, can Satoru actually go back AGAIN and fix this? Is this just going to repeat until he does? The story can’t end here, obviously, and Satoru’s pretty much got his first failure and setback. But then, where does the story go from here? Do we flash forward again, another dozen or so years, and then rejoin Satoru as he’s 29 again? Do we see some familiar faces from the future? All of that’s just so unknown at the ninebt.

In a way, its such a beautiful place to be it, because the potential results are infinite, and there really isn’t much of a way to tell what’s going to happen. And the fact, that this show has done that not once, but twice now? Well, Wow… Just… Wow. 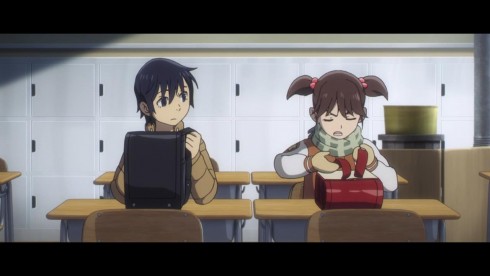 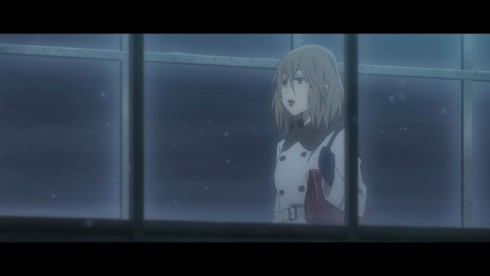 Before I close out, I will say that I did observe a few notable things, although I’m unclear on their significance just yet. The first thing, is that other girl, the girl that tried to frame Kayo in the last episode, and is a bit of a brat. We’ve seen here twice now, and she’s had key scenes every time. I think what her story is, will play a larger part in the whole mystery of what happened to Kayo.

Two, if you notice before X-day, Kayo’s mother is off somewhere, as if she’s left, and it seems like her “guy” has also left the house. Was Kayo left alone? Especially since on her birthday, its she who opens the door, without her mother present. I feel like that’s important somehow. 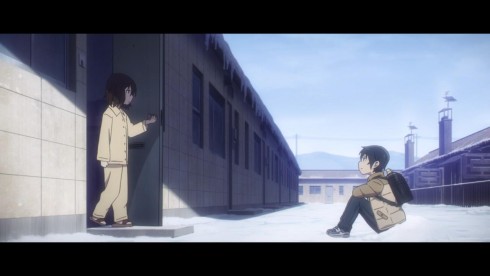 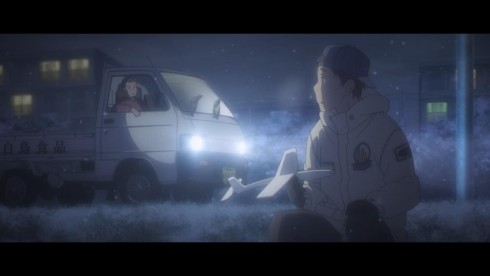 And the final thing? Well, it has to do with Satoru’s Yuuki-san. We see two shots of Yuuki on the bank of that river, and in the second one, he just kinda leaves. So again, Yuuki will play into the narrative somehow.

Yeah, I got nothing else, except for maybe one thing: I so cannot wait for next week’s episode. Okay… One more thing, just one more, I swear! I just really want to commend the show for the fact that it doesn’t have a preview, it doesn’t give you any hints as to what’s coming next, and that little choice? it works wonders for building up the anticipation and yearning for the next episode. Truly, it can’t come soon enough.