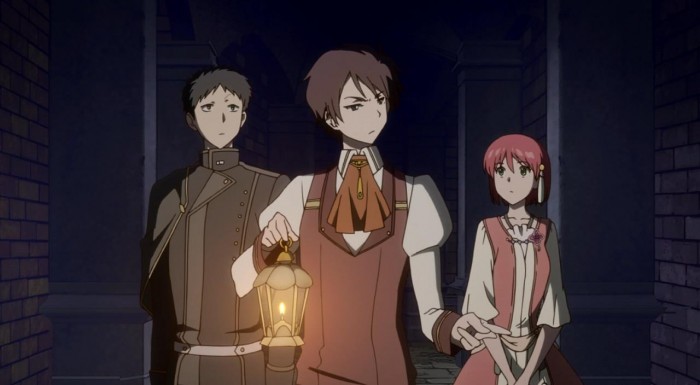 Akagami no Shirayuki-hime continues its odd dance, one that has equal measures of grace and clumsiness. There are things that I continue to love about this show, chief among them being the characters themselves, whether its the old beloved ones, or the equally interesting new ones. Yet, for all the great and likable character moments we have, the plot and general situation that we find ourselves in with this latest arc seems… odd, to say the least.

Listen, I know my opinion is probably not the most popular one to read when it comes this show, if only because I I just seem to not be liking it as much as I probably should. Akagami no Shirayuki-hime is an excellent show and I don’t believe that’s ever been up for the debate. Even a somewhat less than stellar episode from this series, is still pretty darn great regardless. And while I like, love and enjoy this series on a weekly basis, and am actually thankful for its return, I don’t believe in simply giving it a pass for simply being what it is. 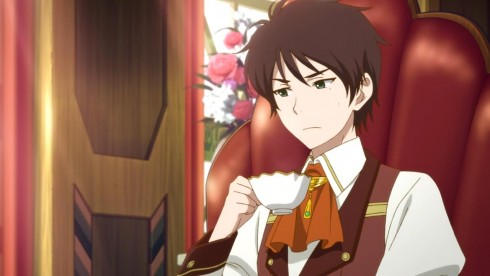 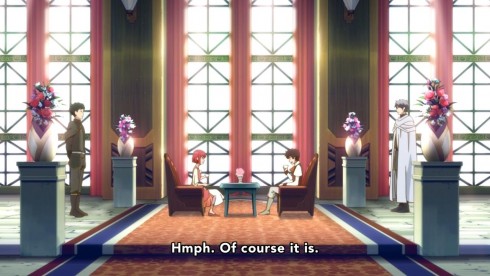 The show isn’t perfect at the moment, and it stands within the shadow of its own first cour. There’s a very simple and plain reason for that too, and its that the story, the plot, just don’t feel like they’re worth anything consequential. This whole situation with Raj and Shirayuki, beyond just being awkward and weird, just feels unnecessary.

I don’t think I ever expected to watch an episode from this franchise, and wonder about the point of it all. I simply don’t get it. I want to, a part of me NEEDs to, but I just don’t. What purpose does putting Shirayuki in Raj’s castle, her old hometown, really serve? 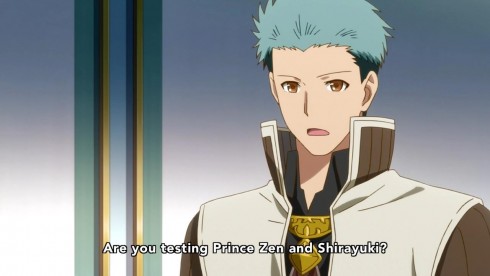 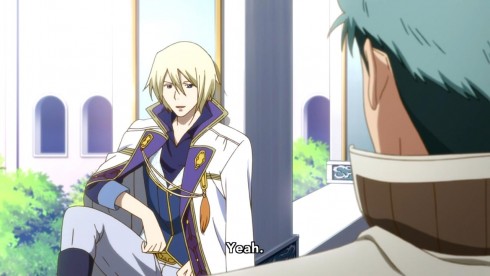 As far as Izana’s concerned, its a test, of some sort, but even that idea feels rather shakey to me, to be honest. What is it a test of? Does Izana, or really ANYONE for that matter believe that Shirayuki is suddenly going to give up on Zen and fall for Raj? Is that EVEN within the realm of possibility? Not really.

Is this helping Clarines or even Tanburn in some way? Maybe, partially, but I don’t think Shirayuki is actually NEEDED, to be quite honest. Raj, for all his faults, has already started to reexamine himself and become a better person. I get that this is sort of like his redemption arc, but I still don’t entirely see the point of seeing that. 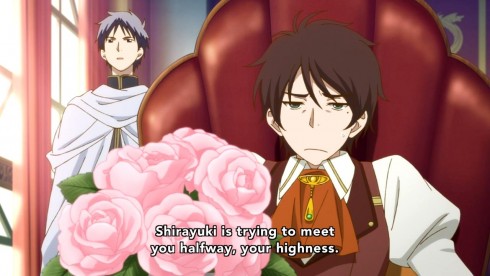 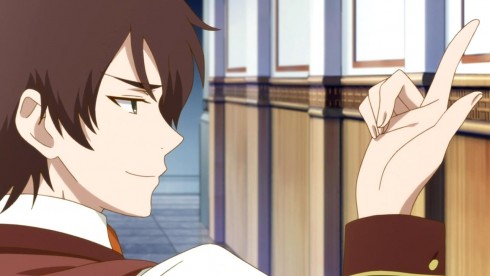 I don’t care for Raj. I mean, I don’t hate the guy anymore, but I really don’t see the point of wasting precious story time, and frankly precious episodes on a character that will at the most, just become slightly likable. This whole story feels like a distraction, an excuse to separate Shirayuki and Zen.

Like I said last week, I get the idea of Zen and Shirayuki needing some time away from each other. That’s a necessary part for them to grow as people, and bring that renewed perspective and distance into their relationship. I’m sure it’ll do them good. I get that that’s what Izana wants, to some degree. My problems aren’t with the CONCEPT of Shirayuki and Zen being separated and doing their own things for a while, my issue is more to do with WHY they were separated and WHAT they’re doing. 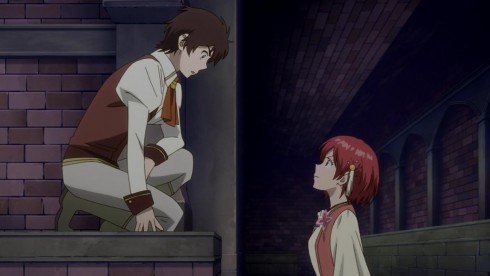 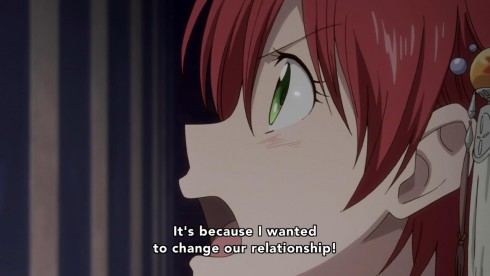 Shirayuki is baby sitting Raj, and on top of that, the guy is unnecessarily being led on. See, for how nice Shirayuki IS being, I don’t personally think its the right approach. All this whole visit with Raj is doing, is making him like and grow more attached to Shirayuki. And lets be honest, She doesn’t intend to stay with him, or be with him. We know thanks to 13-14 episodes of development, that Shirayuki and Zen are a done thing. So that makes the whole situation just needless drama, one that I just keep feeling this show should be above.

Now, I realize I’ve spent a good chunk of this post pointing out my issues with the episode, but its rated at an A- Grade. Why is that? Well because Shirayuki, Raj and Obi rise to be really endearing characters to watch, in spite of the badly written situation they’re thrown in. I actually really do appreciate how difficult it is for both Shirayuki and Raj to interact, given their history. 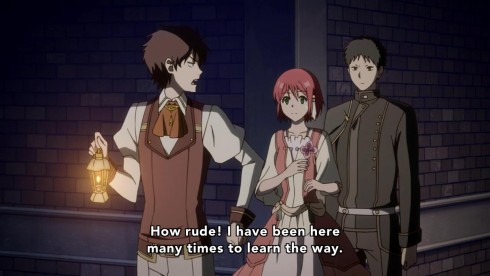 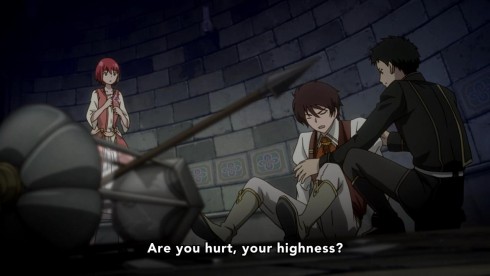 I’ll say that despite the inherent lack of a larger point to it, I did enjoy the whole trek through the underground tunnels. Raj getting lost was funny, as was seemingly everything going wrong. And despite the dire circumstances, both Obi and Shirayuki continued to exhibit a remarkable amount of patience. And I think I ended up liking Shirayuki all the more for how she refused to give into Raj’s pessimism, and then proceeded to eventually win him over too.

I applaud Shirayuki is powering through the situation and trying to get something out of it. And Raj? The effect on him is immense. He continues to appreciate, respect and admire Shirayuki, and is also changing for the better himself. Just by being around Shirayuki, a reminder of his worst mistakes and as someone that he can’t really boss around, Raj is changing, and for the better. 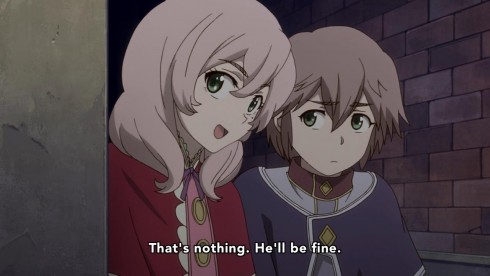 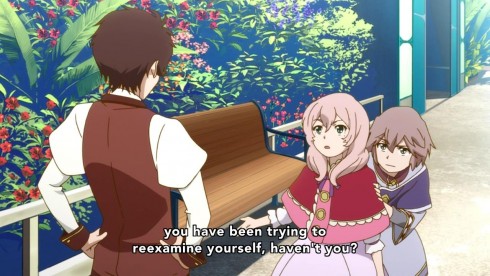 And then there’s his two younger twin siblings. I have to give the show this one, the two twins are exeedingly adorable and switch up the general dynamic of the situation in a really good way. Rona, the sister, is just the right combination of mischiveous, bossy and curious, while Eugena is obviously the more reigned in of the two, and seems to be dragged along by his sister all over the place. They also both really care for Raj, and its through their eyes, that we really do get a sense of just how exponential Raj’s growth really is.

Now, while Shirayuki’s whole visit to Raj is a mixed bag, I will admit that things are looking to be a lot more interesting in Clarines. For one thing, it seems like Mihaya is definitely not double crossing Zen and Shirayuki, and the whole thing with the Kazuki kid is definitely heating up. I wasn’t originally all that thrilled with the idea of another villainous character being after Shirayuki, but there’s at least a straight forward sense of mystery and intrigue to this particular plot thread. 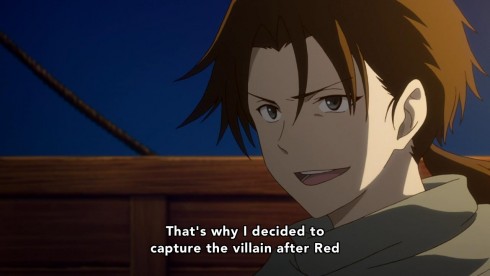 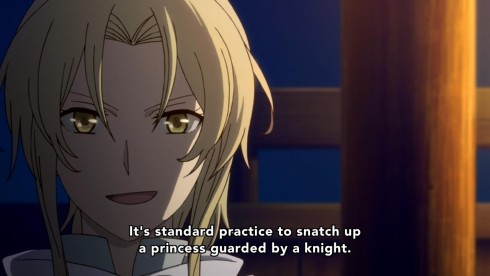 Plus, Kazuki seems to be the first real villain that might have some depth, and might not end up redeeming himself and becoming another reformed, likable odd dude. Its smart of the episode to end on that particular note. Right now, however, these two stories are separate, if only because of the lack of proximity between where they’re happening.

The way I see it, this is a rough patch for Shirayuki, and for me as far as loving this show goes. Its not hitting it out of the park every week, and I think I’m still having trouble getting over that. But I hope I’m being fair here at least. There’s good things about the show right now, and some not so. 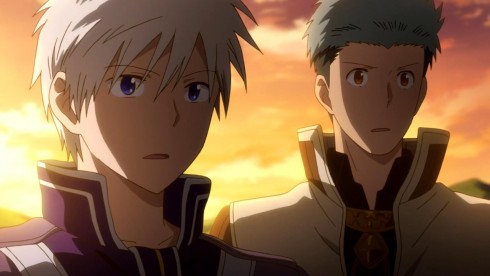 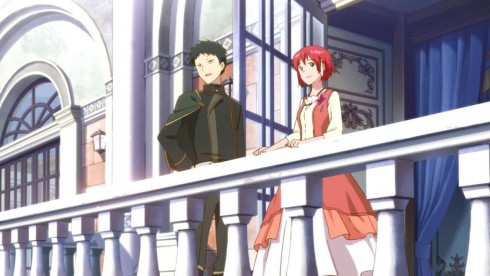 At this point, I’m just waiting. I’m waiting for Akagami no Shirayuki to get through its rough patch, or just plain prove me wrong and dazzle me. I’ll wait for as long as it takes, and I can see myself waiting for the entire run of this second cour if need be. And even if I do end up waiting for an upswing that never happens, its not like the wait is going to be painful.

Akagami no Shirayuki-hime is a good show even at whatever level its at now. I like it, I’ll continue to watch, and I’ll continue to write about it. But I can’t help myself for missing the old first cour, and how darn amazing that was. 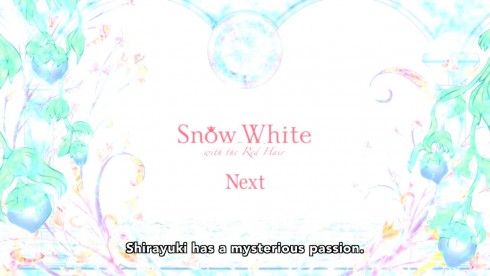 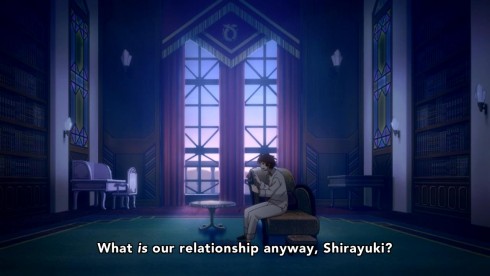 “What is our relationship Shirayuki?” Yeah, that’s an EXCELLENT question Raj. I’m looking forward to seeing some kind of answer next week, even if its not one that I’ll particularly love or hate XD