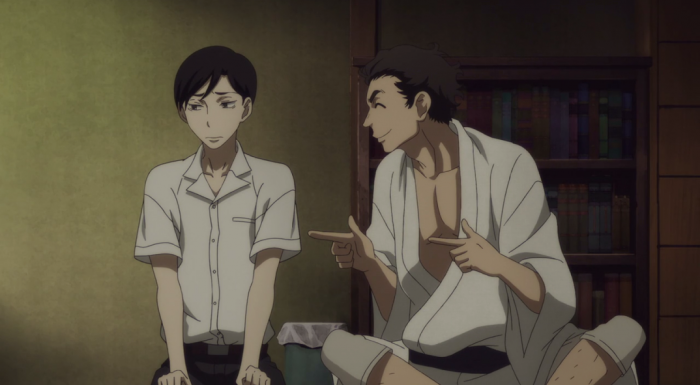 When Showa Genroku Rakugo Shinju premiered three weeks ago, it was greeted with high praises from just about every reviewer, lauded as one of the best first episodes of the winter season. I was singing right there with ’em in my own li’l corner of the Interwebs, but I told Team Evo that I wanted to give it the three-episode rule to see if it had staying power before I committed to covering it.

For those stumbling across this post before the other glowing reviews, SGRS (yeah, I’m not typing that whole thing each time) is about the storytelling performance art called rakugo. (You can read about it on Wikipedia or find videos on YouTube if you’d like to brush up before watching, but the series does such a great job of using its own performances to demonstrate the medium that I’m not sure it’s necessary). The story begins in the 1970s, establishing a trio of primary characters—Yakumo, the rakugo master; Yotaro, the cheerful ex-convict who becomes his apprentice; and Konatsu, the young woman who loves rakugo but whose gender prevents her from performing professionally—and the world in which they reside. However, after the double-length premiere, it shifts its focus to 1930s/40s Japan as Yakumo explains the relationship between him and the late Sukeroku, a talented rakugo performer and Konatsu’s father. 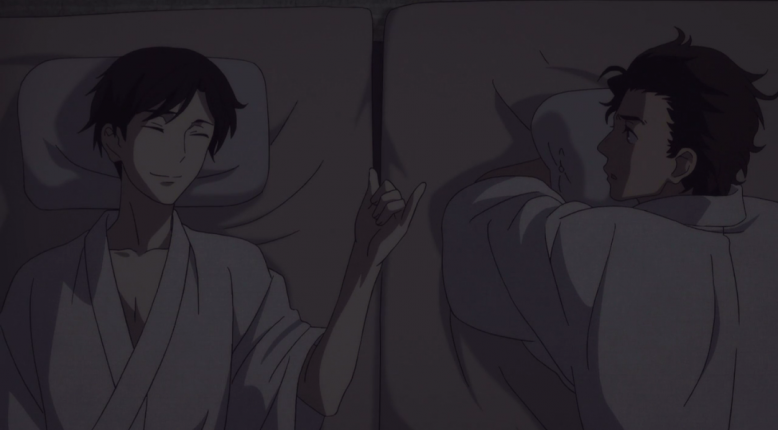 Presumably we’ll return to the present-day story and characters at some point, but for now we see Yotaro and Konatsu echoed in the lives of the people who came before them. It’s easy to see why Yakumo and Konatsu see so much of Sukeroku (called “Hatsutaro” in his youth) in Yotaro, as both have outgoing, infectiously likable personalities and a good sense of comedic timing. Less noticeable but more significant are the similarities between the young Yakumo (“Kikuhiko”) and Konatsu, as both grow up in spheres not traditionally for their genders (Kikuhiko in the world of geisha and dancing, Konatsu in the world of rakugo), both are separated from their parents at a young age, and both are often treated as outsiders due to forces beyond their control (Kikuhiko his injury, Konatsu her gender).

If this sounds complicated—well, it is, a little, because personal histories, psychologies, and relationships are by nature complicated. But don’t let it intimidate you. SGRS does a remarkable job over three episodes easing you into a story almost as foreign to its modern-day Japanese audience as it is to its international one, using key interactions and a camera that know how to focus on small, intimate details to give its world and the people who inhabit it a richness and depth that makes their singular struggles resonate across times and cultures. That it does all this while relying on blessedly little direct exposition just makes its accomplishments all the more impressive. So, yeah. This is an excellent show and you should be watching it.

There’s a lot to unpack, but fortunately I don’t have to do it all by myself because other bloggers have already done a great job of highlighting key points and features from early episodes. SeHNNG at Altair & Vega walks us through how SGRS uses cinematography and performance to explain rakugo to its audience; Isaac at Aniwords talks about the way the series creates empathy through specificity; and Caitlin at I Have a Heroine Problem explores Konatsu’s frustrations and the parallels between her and the young Kikuhiko. These are good essays! You should read them! As for my first super-sized post, I’m going to slide past those topics and focus on Yakumo’s story in the third episode, the particulars of history, and how cinematography reveals character. 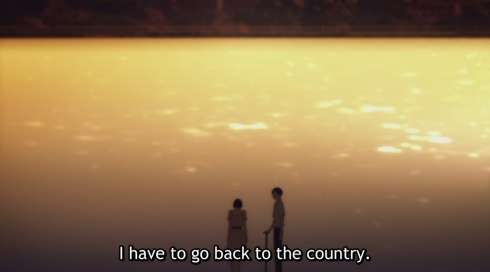 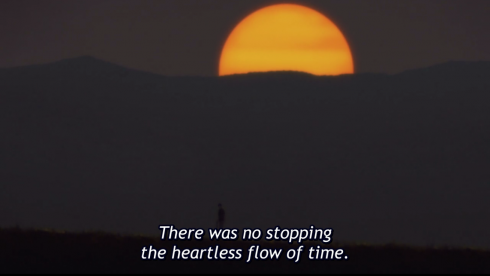 Episode 3 covers a stretch of years in Kikuhiko’s young adulthood during the build-up to and aftermath of World War II. We can feel the influence of these greater forces throughout, sweeping the characters along on previously unforeseen paths. At the moments when Kikuhiko has the least control over his life, he is dwarfed by the landscapes around him, a small silhouette amidst setting suns and flowing rivers. Social movements and political events—the capital-H History—change and influence individuals, and Kikuhiko and the people around him are no exception to this.

And yet, for all the Capital-H History going on, there is remarkably little of the broad events shown or even mentioned during Yakumo’s story. Instead he focuses on how these events personally affected him: on the self-censorship of rakugo and the dwindling audiences and students; on his master and best friend leaving him behind; on his retreat to the countryside and growing frustrations at his own helplessness. The “end of the war” is a single line of exposition told before a towering cumulonimbus cloud, reminiscent of the violent storms and smoke clouds over Japan’s cities, but also softer, out of focus. It’s a distant event barely mentioned by the narrator or the art because, for all its Historical significance, it isn’t what’s significant to the personal, “little-h history” of the storyteller himself. 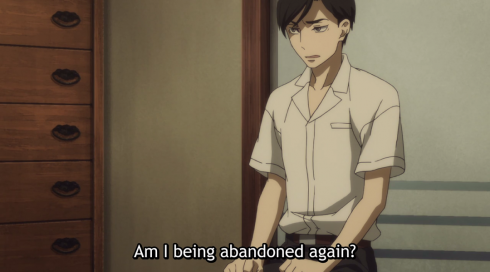 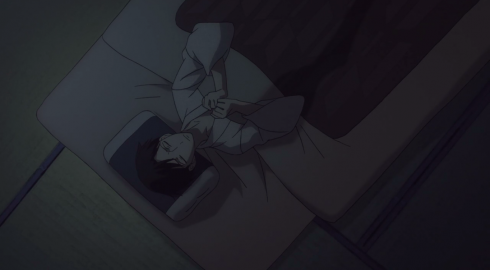 Yakumo (and the camera) linger on a pinkie promise, a hand shaking in the dark, the recitation of stories that help both him and his audience escape the world around them. The “end of the war” gets a few seconds but Hatsutaro’s homecoming is a series of lengthy shots, the shifting expressions of its characters animated in loving detail. The straight-on shot of Kikuhiko’s disbelieving face slowly crumpling into relieved, happy tears is particularly affecting, cathartic because of the close attention we’ve paid to his small, personal fears and growing loneliness.

This is how history is remembered by those who live it: Not as the point-by-point “greater” events found in a textbook, but as intensely personal, even trivial moments set against a backdrop of global ones. It’s this focus on the specific, on the intimate, that breathes so much life into the world of Showa Genroku, making it not just a historical fiction, but a personal one. It also gives its characters depth and breadth, revealing far more than what Yakumo’s matter-of-fact narrative and the dialogue tell us. 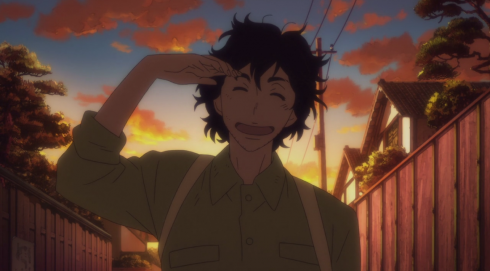 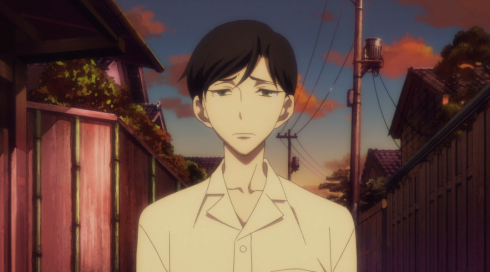 Perhaps the most prominent example of how SGRS‘s careful camera reveals character is in its repetitive, almost overbearing focus on Kikuhiko’s cane and feet. While it’s rarely explicitly mentioned, we see it so often that it becomes as constant a reminder for us as it is for Kikuhiko. When he worries that Hatsutaro is “leaving him behind” in rakugo, he walks slowly to school, his limp more pronounced. When his first girlfriend leaves for the countryside, he drops it, losing needed support. He doesn’t have to say it for us to know that he feels hobbled by it, made less useful, or that he sees it as the reason for his “abandonment” both as a child and a young man.

Importantly, though, while Kikuhiko never loses the cane entirely, the way he uses it does change over time. As the war progresses and then ends, his slow, hesitant steps become faster, more confident, first when he’s working in the countryside and then later when he returns to Tokyo and finds purpose supporting the household and coming into his own as a rakugo performer. He almost forgets his cane in his haste to get to work, and for the first time we see him using it to help him run instead of walk. He’ll always need it, but he no longer feels like it’s holding him back. It’s a part of him, and his eventual comfort with it mirrors his eventual comfort with himself as a young man and rakugo performer. 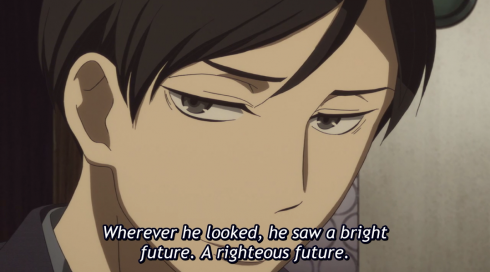 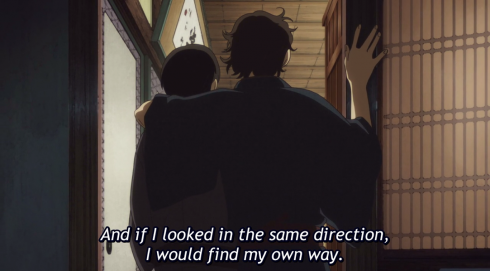 I’ve called Sound! Euphonium a “sensual” story in the way it uses lush art and careful detail to make the audience not only see but actively feel a scene, and SGRS accomplishes something similar. More than that, it uses its details to create characters who aren’t just broad-stroke archetypes but individuals rich with passions, concerns, fears, and contradictions, some of which we only barely glimpse and others we feel as keenly as they do.

So far, SGRS and Director Hatekeyama understand that a story is as much about how it’s told as about what is told, and that this story “about Sukeroku” is more about Yakumo’s own perspective and focus; about the memories he kept, the ones he lost, and the parts he chooses to share with his audience. It’s through these details that history comes to life, and we as viewers can feel the pain of abandonment or the joy of reunion as sharply as our storyteller does.

All of which bodes very well for SGRS‘s ability to keep weaving its unique, character-focused story, and on my ability to keep typing lots of words about it in the following weeks. Regardless of where this journey takes us, I’ll be walking it till the end. 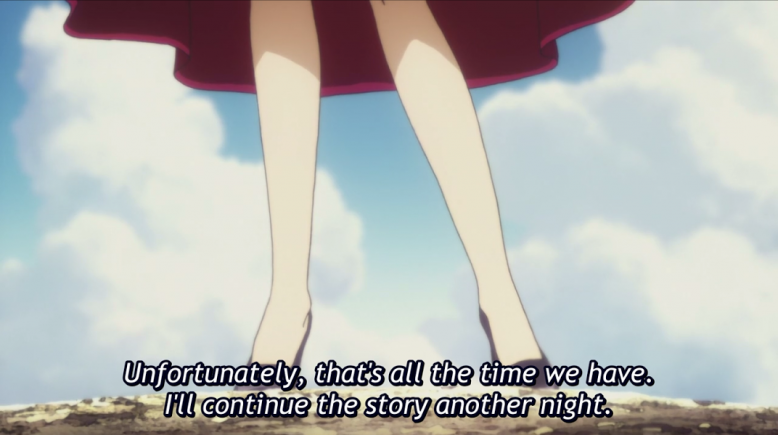