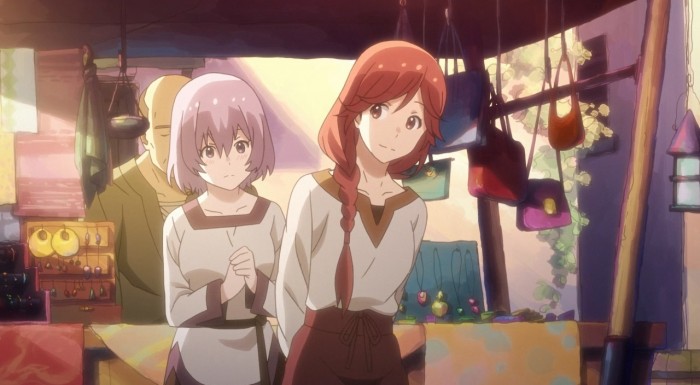 While Haruhiro is the main character in this series, I feel like Yume is basically the most likable person there and a central support for the whole thing. Both a source of levity with how she often misuses or fails to properly remember sayings and also a great deal of heart. She is such an important pillar of support for Shihoru, who still struggles to openly talk and interact with the guys of the group. The antagonistic relationship with her and Ranta can be fun to watch, but also how she can pretty calmly chat with Haruhiro. Both of them are kind of the scouting party of the group so makes sense that they talk semi-often. It might not mean anything, but as a whole I like those two the most out of the cast so far. All I can say is that series….I’m not liking this potential Ranta/Yume bit you are hinting towards. Knock it off! But honestly I do think there is some solid potential with Haruhiro and Yume, they actually get along which is a good basis for development. 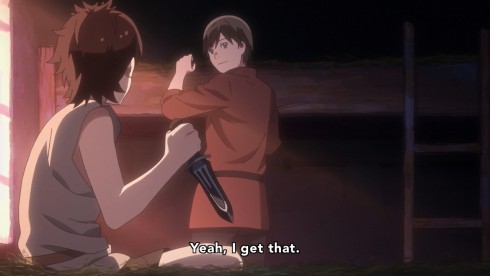 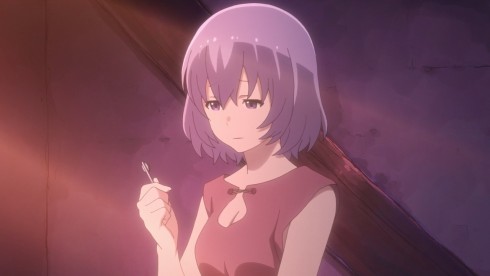 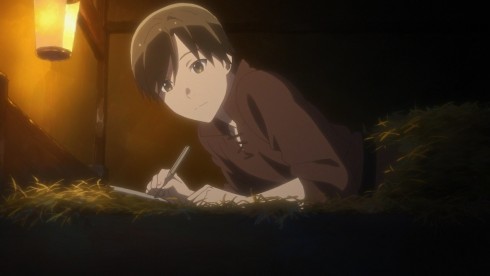 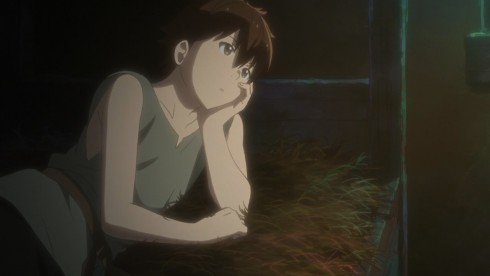 But damn, I’m getting a bad feeling here with Manato. The quiet conversations with Manato and Haruhiro, the whole “we’d be in a pinch if you weren’t here”, and just the fact that a shoe hasn’t dropped yet. It feels like they have been building up to something bad happening to shake up our group, but nothing has really happened yet. They’ve gotten into very tight spots financially, but have managed to hang in there.

Plus it just seems very probable. You have Shihoru getting interested in Manato and his loss would spur some character growth for her as well. Plus, Haruhiro is clearly the MC of this series. It make sense that he would become the leader at some point. Although it’s not necessarily required for that to happen. Either way I hope they don’t test Haruhiro’s theory that if Manato wasn’t there they’d be in a very bad situation if not dead. 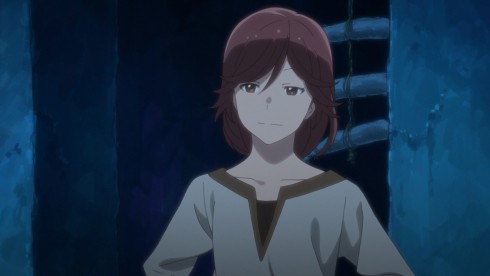 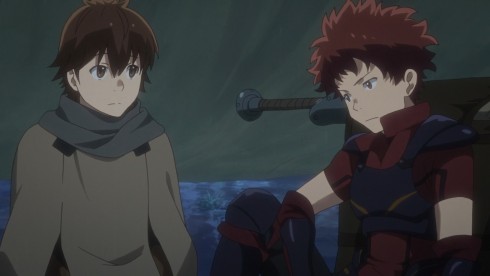 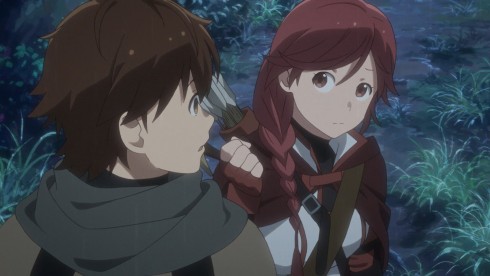 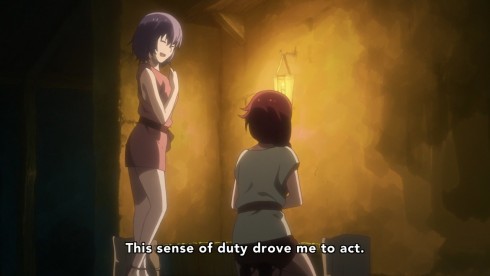 Yeah, they did continue the whole “peeking” thing and let it drag on for a while, but this did feel reasonable in a sense. Yume wouldn’t be someone who let that kind of nonsense go and would make sure to get the full facts out before slugging Ranta for it. Her chat with Haruhiro later was kind of entertaining. Just a kind of run-on conversation really. It would have been better if Haruhiro was doing the peeping because he’d apologize, but an apology wouldn’t necessarily make things ok either. It showed how Yume really does stumble over her words trying to get her meaning out. Which was probably that while it’s never a good thing, it’d have been better if Haruhiro was the one doing that kind of thing. At least in comparison to Ranta going around peeping. A random conversation, but one I enjoyed for some reason.

It just tied into the first half that was about this group continuing to get a feel for each other and also struggling to make any money. It did lead to the Haru kind of peeping scene, but one where he more or less redeemed himself by steering Ranta away from the girls. Plus while he had an inner conflict, he did make sure to warn them. Makes sense that he’s a bit back and forth on these kinds of things. Haru has his own feelings, but in the end does try to do the right thing. Though might have hurt a bit since Yume didn’t openly doubt his presence before going to wash her clothes. If Ranta had been standing there, things probably go differently. 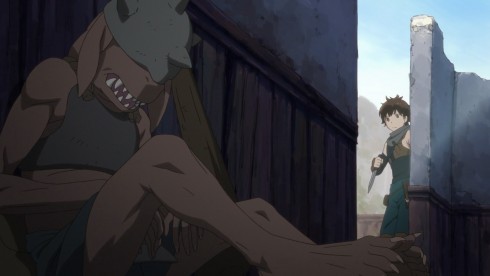 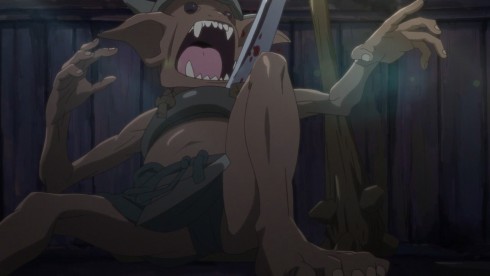 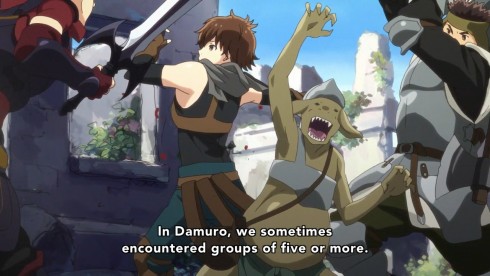 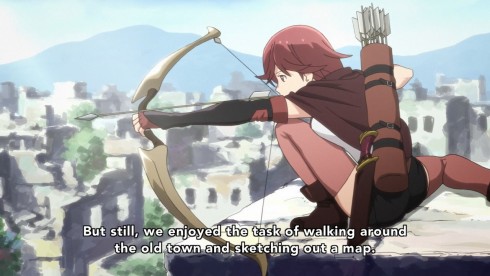 The second half went much better for the group. Instead of just wandering around the woods, they head over to Damuro. Changing locations from a stronger group of enemies that are found closer to Ortana, to a place with slightly easier goblins. There is a risk that they could get overwhelmed since it is a city full of goblins, but because there are so many there are better chances to find small groups or goblins isolated. It’s kind of weird, feeling like they are a group of assassins trying to find vulnerable individuals, but they’ve got to survive themselves.

The first fight was short, but still brutal. The group ambushing this sleeping goblin and killing him before the guy could really respond to them. That is effective to be sure. They had to keep going carefully, but they were getting the job done. I was a bit worried about them fighting in a tight location like a building, but they managed to handle that just fine. The key is gathering experience and this episode was really all about it. They are just fighting individual goblins, but they are getting pretty darn good at it.

The montage scene later was still pretty nice. It was interesting seeing the various ways the group is learning to fight and improving. Yume’s skill with her bow is increasing as is the accuracy for Shihoru’s magic. They are still rough around the edges and need to pay to learn some more skills from their teachers, but at the very least they are managing and adapting. 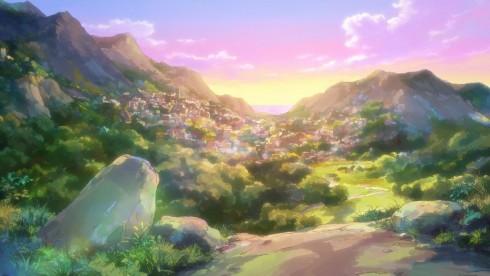 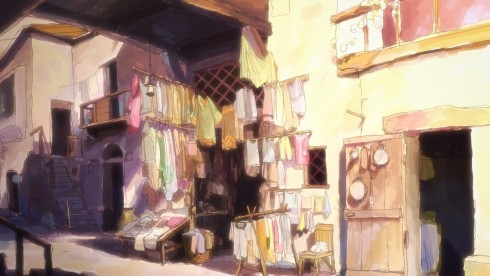 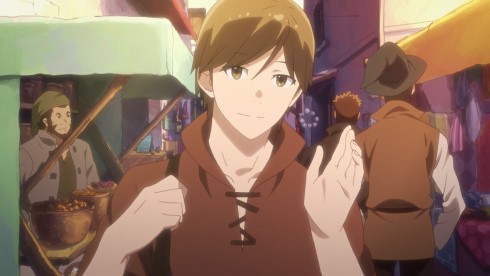 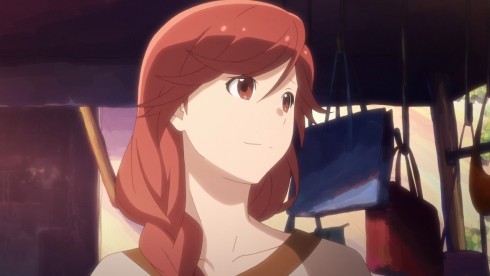 We got another scene of the group taking some time to relax and seeing how they choose to spend their time and money. Understandably Haru is going for something more useful and practical like underwear. Though I give him props for taking the time to haggle the price of underwear down…It is a fair point that these people have to survive here and clothes are actually important. Unlike most shows where clothing just survives until the end of time…their stuff is wearing out due to the extreme lifestyles they are being forced to live. Ranta and Moguzo just enjoying a meal makes sense. Same for Manato basically wandering by himself while Shihoru and Yume are hanging out. Though clearly there is interest on both sides with Manato and Shihoru. Along with probably a bit of envy and maybe a crush that Yume has for Manato as well.

In the end I’d say this was another really strong episode for the show. It’s moving slowly, but for that reason you can get attached to the characters and get a feel for them. Plus I get the feeling that major moves are coming up. With a steady stream of success against isolated goblins they might start to get a bit sloppy or feel they can take on bigger threats. Can say that I’m certainly on board for the rest of the show now. Three really strong episodes seems to be enough for me to take this on. No matter how things turn out, will hang in there until the end.