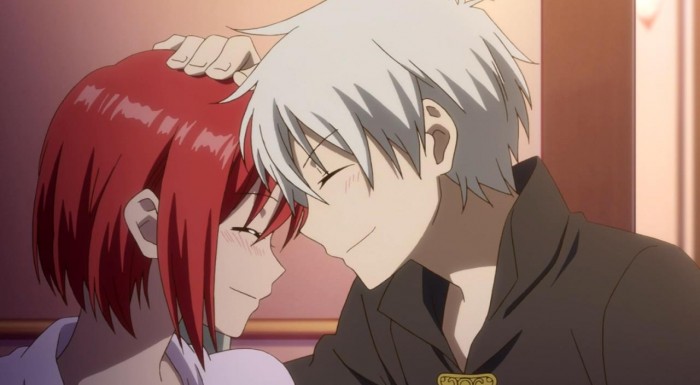 Then came the second episode, and all was right with the world. Okay… Maybe not quite, but I still really liked this second episode of Akagami no Shirayuki-hime’s second cour a lot more than I did the first. Unlike the almost alien sensation I got from the first episode, this week’s offering made me feel a welcome sense of the familiar. I finally felt like I had returned to this magical world, where Zen and Shirayuki alongside the rest of their friends and family seem to reside.

Yet, while this episode definitely had a lot more of the stuff I liked from the first cour, and it seemed to fix some of those character problems that I very “acutely” felt last week, it still had sense of unease. Unease, tense, being uncomfortable, that seems to be the “thing” that this second cour seems to be aiming for, and after two episodes, and everything that I saw this week in particular, I know now that its not at all unintentional. 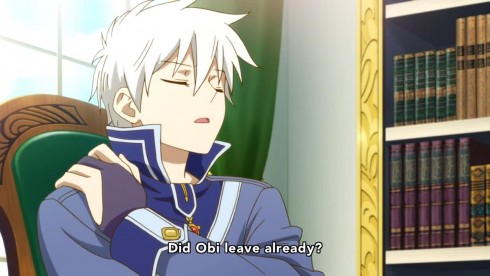 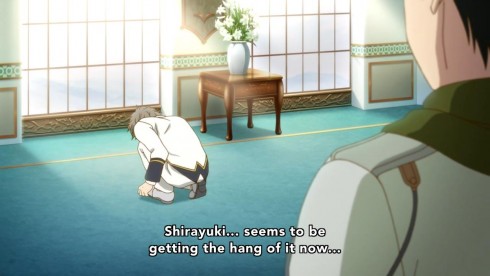 This isn’t that relaxing, light-hearted and calming story that we saw from the first cour, its SOME of that, but with the stakes raised and the situations far from ideal. Its an interesting choice, because to me, Akagami no Shirayuki felt very much like comfort food. No matter how down, or how out of it I was feeling, this show seemed to always just bring me up and cheer me on.

Now? I’d say its still got those likable characters that made the first cour such a joy to behold, but its also starting to attack and confront those uncomfortable questions and situations that it almost seemed devoid of at first. In a way, this show is slowly tip toeing into the realm of realism, and out of that almost dream-like fairy tale experience it was before. 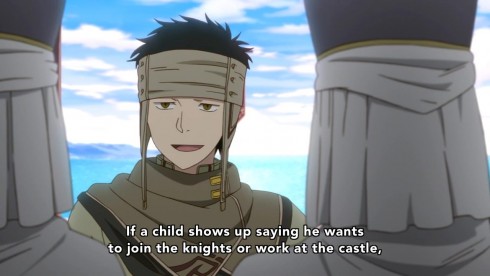 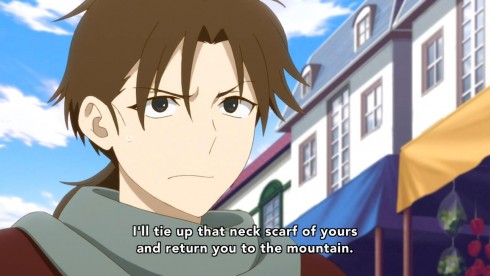 Discomfort and unease is the running theme this week, as nearly every character seems to be moving out of their comfort zone. First there’s of course, Zen, who’s not even remotely happy about the fact that Shirayuki is both leaving, and that there’s some random person chasing after her. He’s helpless to be able to help her or protect her, and I think this whole story arc may very well be about Zen having to step back. He can’t always be there to help Shirayuki, and she can’t always be there for him.

Again, this is pretty mature territory. The best and most healthiest of relationships are formed by people who aren’t completely co-dependent on one another. I might not like the idea, I might not like HOW it came to be, but I can see the value of Shirayuki and Zen taking some time and distancing themselves away from one another. 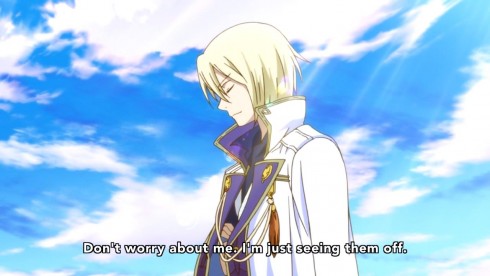 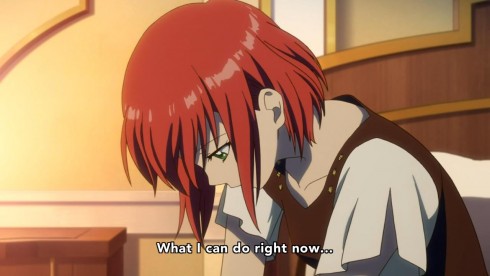 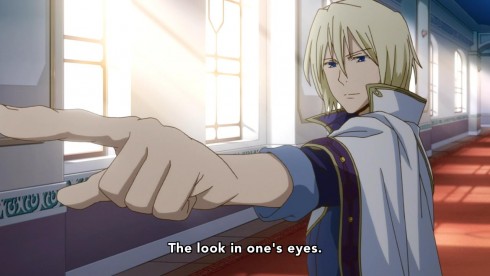 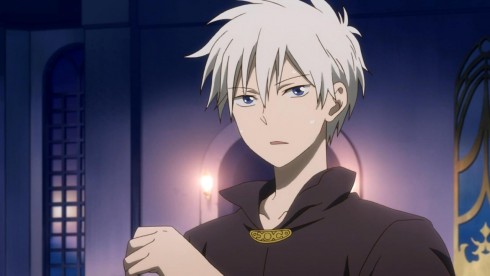 I never had quite realized it, but the two of them never really got any time apart, to really process what had happened. Shirayuki was in trouble, was whisked away with Zen, and then has been around him ever since. Is Izana’s big goal giving these two time to think and truly decide on whether they want to be with one another?

I’m not sure, but what I do is that Izana’s intentions aren’t inherently evil or harmful. It feels like its part challenge, part giving these two some kind of situation that they can actaully benefit from. But in classic Izana fashion, we won’t really find out about his grand designs until probably much later. 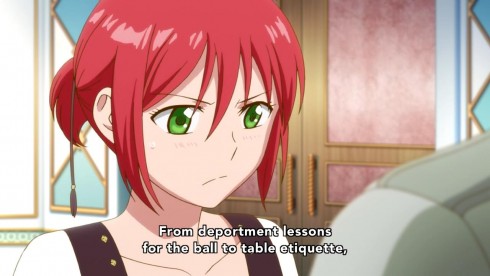 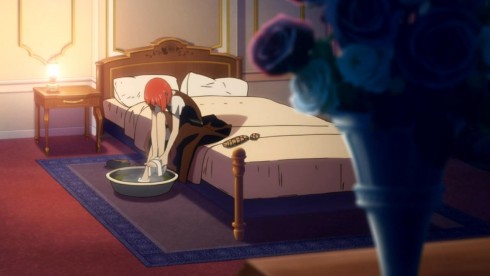 So Shirayuki’s unease? That comes from literally everything she’s doing now. She’s been put into a situation where she basically has to learn all this high-class etiquette, and she has to return to a country that she fled from, and meet the man that was the reason for her running away in the first place. Make no mistake, whatever Izana’s intentions, he is basically asking her to jump right into the Lion’s Den. Calling this situation uncomfortable and difficult, is terming it mildly.

The one good thing though? It seems like Shirayuki and Zen were acting a lot more like I remembered them. There was that sense of effortlessness, of comfort, that’s almost so natural and complete that it often feels idealized. Yet, one of the best moments of the episode, was when Shirayuki and Zen had their little night time chat, and then the little embrace before they said goodbye. That felt like the wonderful couple that I had seen become something in the past 13 episodes, and it was just nice to see whatever weirdness we had been seeing, gone, right before Shirayuki left XD 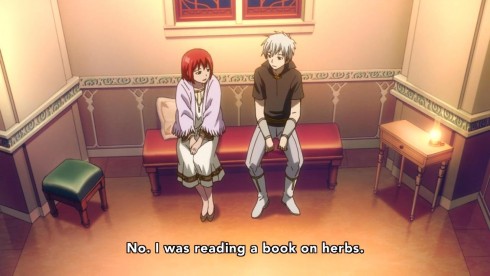 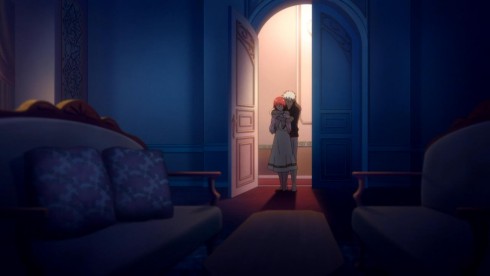 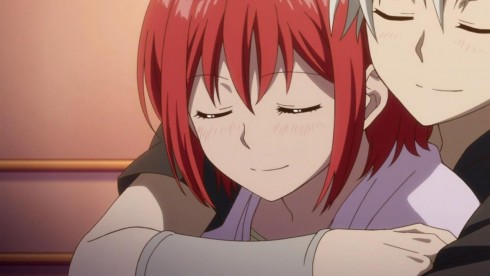 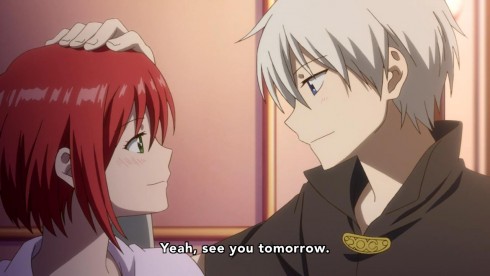 And speaking of Shirayuki’s departure, The whole situation with Obi did a complete 180 didn’t it? I mean, the whole scene with Obi and Zen was a bit bizzare, not only because Zen had pretty badly slighted Obi, but also because he conceded a bit too easily almost. This whole Obi/Zen/Shirayuki love triangle doesn’t seem like its going away but… At least Zen acted like more of a man, and someone who did indeed decide to trust Obi like he said he would.

Obi though? I know he volunteered for the job to protect Shirayuki, and I know that he did with the most noble of intentions but… His feelings are very much still there. Listen, I get that Obi isn’t going to act on those feelings, he respects Zen and Shirayuki waaay too much to do that, But the show and the story continues to just kick the guy when he’s down. 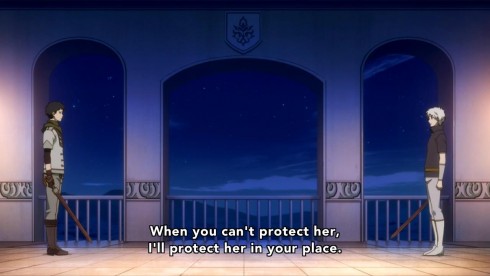 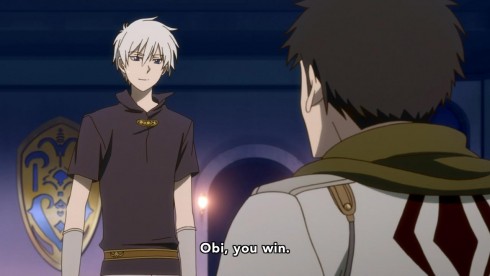 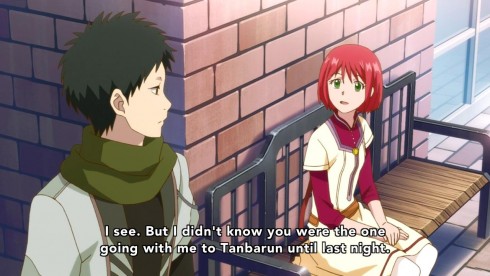 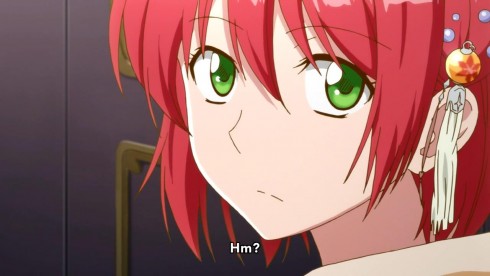 No I don’t see Obi and Shirayuki as a couple, but damn does Shirayuki do some things that unintentionally hurt and lead on the guy. Shirayuki wearing the gift that Obi got her at the end of the last cour? Even someone as self-controlled as Obi is gonna have his heart melt. The poor guy is stunned, and even a little happy, and at the same time I found myself just feeling really sorry for the guy. Obi’s whole sense of unease is being around and protecting the woman that he knows he can never have, and that’s not a sense of unease I’d ever even want to be a part of.

And then there’s that final sense of unease, the one where we have Raj “welcome”Shirayuki. That whole scene is just… Awkward. To Shirayuki’s credit, she handles it that impossible situation as best as she can but its obvious that she’s not in for a good time here. Raj is clearly smitten with her, in love with her after having gotten to know her as a person… And I just can’t see this whole situation ending well at all. 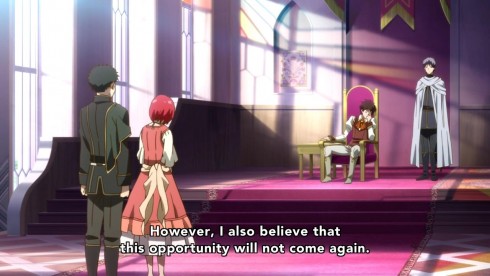 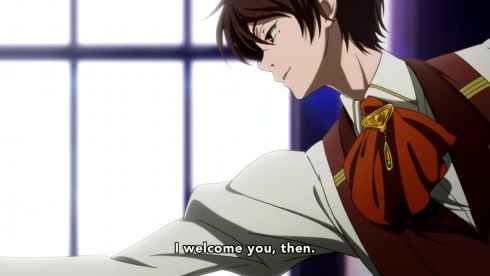 I will say this, for all the unease that this episode generates, it does a pretty darn good job of making you FEEL something. I can respect a show for making me feel something that it wants me to feel, and while I don’t like what I’m feeling at the moment, that’s the point isn’t it?

At the end of the day, I think Akagami no Shirayuki-hime’s second cour is actually going for something else entirely, something that its never done before. Its moving away from the comfortable stuff that its so darn good at, and going for something new and potentially exciting. While the start was rough, I’d say this second episode did a good job of keeping me both engaged, and intrigued for whatever’s coming next. 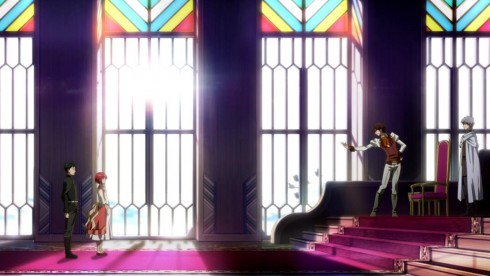 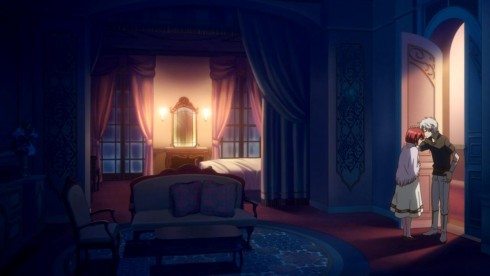 And yes, this week’s episode did alleviate a lot of the fears I had. I’m in, Akagami no Shirayuki, I’m in. Lets see what you’ve got in store for me and the rest of the audience. 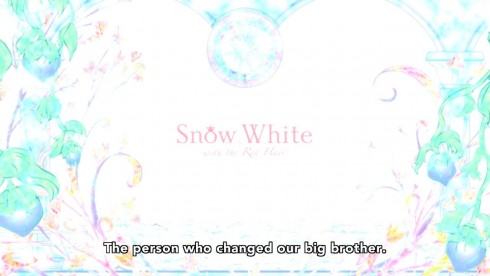 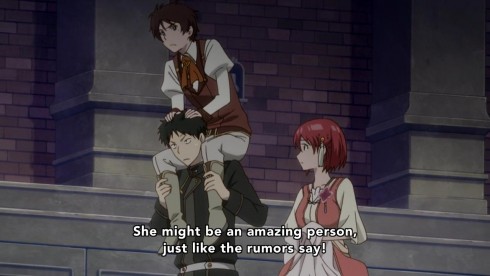 So Raj isn’t an only child? Okay, this just got infinitely more interesting XD