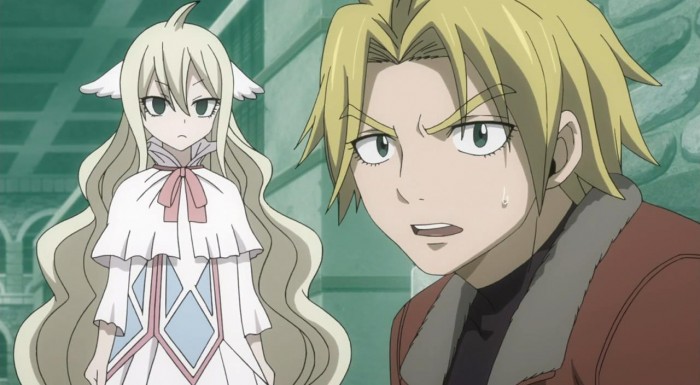 I could really get used to this. Fairy Tail just delivering the goods each and every week that is. Its the second week since we dove into Fairy Tail’s origin story, and I still can’t believe how endearing and engaging of a tale it really is. I hate to say it, But I haven’t enjoyed Fairy Tail this much since the start of the Tartaros Arc all those months ago. A big reason, I think, for why the show is so enjoyable is because it feels like its really telling a story without holding anything back, or rushing to get somewhere or do something. 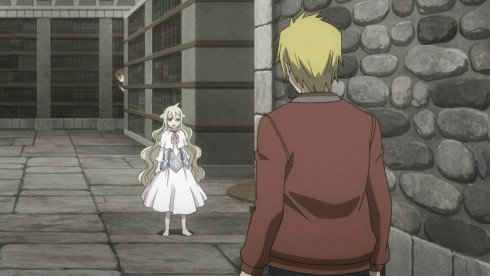 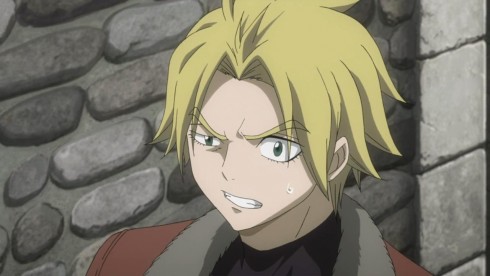 Mavis’s first meeting with Yuri is what the bulk of the episode is spent on, and man is that meeting just remarkable. If you’re read my posts on Fairy Tail before, you’ll know that one thing I often criticize the new series on is a lack of focus. Simply put, trying to tell too much at once, even if you break it up, is just not conduce to good entertainment.

Which is why this week’s episode is such a joy to behold. Last week’s episode focused squarely on introducing Mavis’s kind-hearted nature and where she came from. It also served to highlight Zera, and the kind of relationship that the two girls had in their early days. This week? This week was really Yuri’s coming out party, his moment to make an impact. 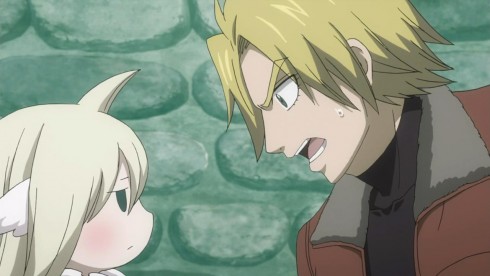 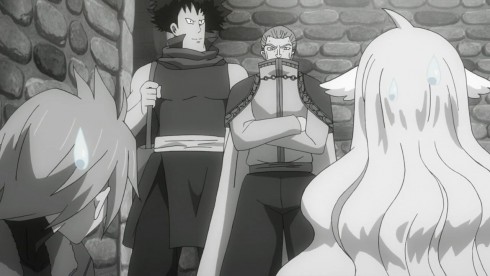 And I have to say, I’m surprised by the fact that in terms of chemistry and friendship, it seems like its Yuri and Mavis, not any of the other two, that set this whole thing in motion. If this week’s made one thing abundantly clear, its that this really is a story about Mavis and Yuri, and how Fairy Tail results from that meeting, and less so about the other two. Sure, over time I’m positive that Mavis will win over the other two, but the chemistry, the playing off of one another, that’s definitely between Mavis and Yuri.

Thankfully, Yuri is a character that’s more than up to the task of being Mavis’s Dance partner. The game the two of them have, a simply truth guessing game, is so riveting to watch. It really is a battle of wills and the mind, and its the sort of stuff that we haven’t seen from Fairy Tail yet. Its kind of amazing, in a way, how non-actioney this story arc of Fairy Tail really is. This kind of psychological warfare is the sort of stuff you’d see in a much different show, let alone a shounen battle manga franchise. 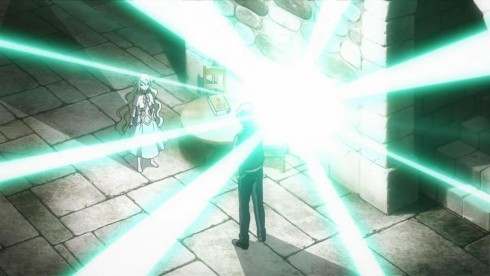 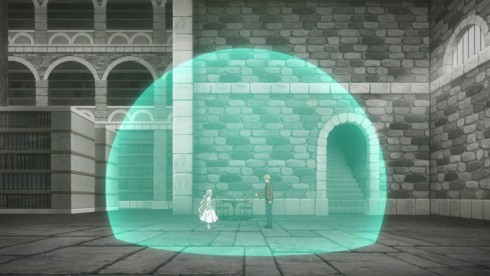 And that’s what makes Fairy Tail Zero so darn special, its a breath of fresh air, a change of pace, at a point where I think it really was sorely needed. The calm, slow and almost fantasy-ish approach really does do well in the Fairy Tail world. Fairy Tail’s always had a huge element of traditional Fantasy in its story, but I think Zero is where Mashima-sensei really embraces it. I’m sure before the arc is over, we’ll get some nice battles and action packed moments, but I can’t help but appreciate the reserve.

Its just so fitting to see Mavis dominate and defeat Yuri, not with her magic power (because we all know she has that later down the line), but with her mind. Yuri, for the most case, is a likable, brash and adventurous young youth. In another story, he’d probably end up being the main character, the guy who finds a mysterious girl while he’s out treasure hunting with his friends, and ends up taking her in and going on an even bigger adventure. I think its exceedingly clever, for Mashima-sensei to develop a character that could very much serve as a protagonist himself and put him next to Mavis. Its unheard of, its weird and its different, and most of all, it just works. 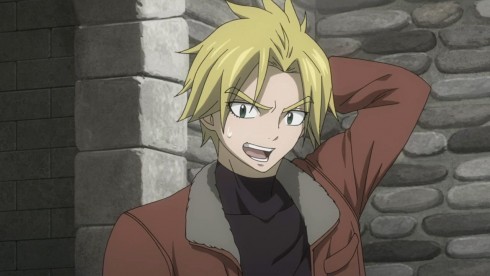 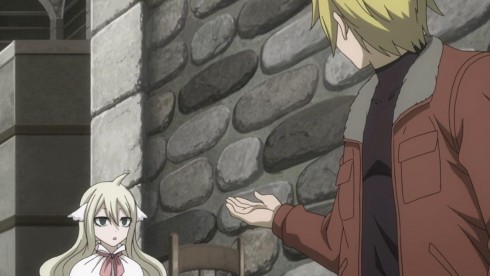 Before I forget, I have to commend Katsuyuki Konishi on his playing of Yuri. If you’re unfamiliar with him, he plays Laxus in the present day Fairy Tail storyline, but I’m happy to say that I couldn’t detect a hint of Laxus in Yuri. Yuri’s a different character for one, but there’s an optimistic boyishness to Yuri, that Konishi just nails, and differentiates from the badass, dillenquent-like Laxus. Its just something thoroughly impressive when a voice actor can display such a range, and give the two characters he plays, distinctly different identities.

Now… While the episode is mostly about Mavis and Yuri’s first meeting, and the Tenrou Jade acting as a macguffin to send them on an adventure, its also very interesting to note that the foreshadowing and teasing is off the charts. I love those moments, absolutely, positively love them… Where Mavis or Yuri will hint at something that’ll happen in the near future. 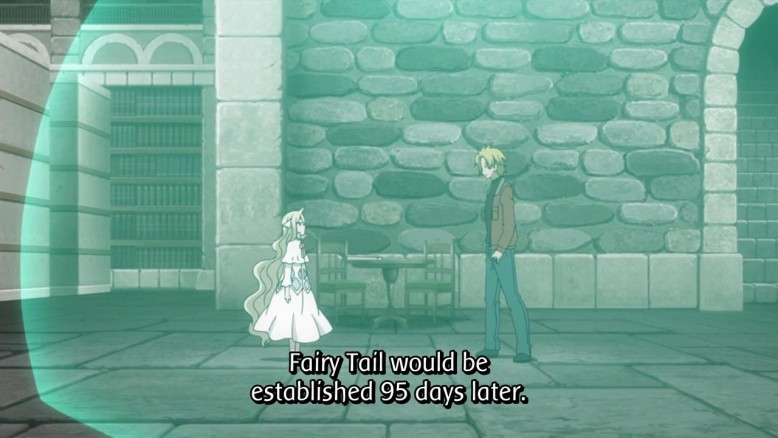 Yeah it was. Speak those sweet words to me… O_O

“That was how I met Yuri. Fairy Tail was formed 95 days later.” MY GOD! How can that NOT give you the chills and amp up the excitement? That’s just such a darn cool line, and its directly feeding into our urge and interest in Fairy Tail’s formation. That phrase, that sentence, is like a reaffirmation by the story itself. It knows why we’re here, it gets it, and its going to give us what we want.

The other bit of hinting, is regarding Zera. Zera… I’m of two minds when it comes to her, or rather, talking about her. See, I have a pretty darn strong suspicion about her, and what her story is going to end up as. I think, some of it is simply because the show is just telegraphing the big twist its planning a bit too obviously. Slight of hand, or trickery isn’t Mashima-sensei’s strong suit it seems, as he seems to end up revealing his big moments a little ahead of time, simply by setting them up too clearly. 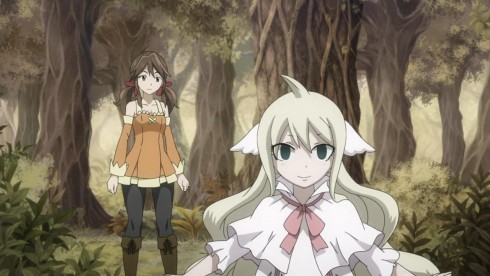 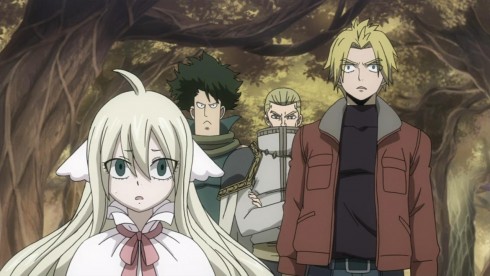 Alright, I’ll bite because I can’t resist, against my better judgement. Zera isn’t actually alive, I think she very much died that day when Red Lizard was attacked. There’s just too many hints, or nods to the idea to not even remotely hint at it.

For one thing, everyone keeps referring to Mavis as “living alone”. Its one thing if they simply didn’t notice Zera the first time, but given how skilled and perceptive everyone is, its hard to imagine that they wouldn’t detect another presence in the area. Secondly, There’s the fact that Mavis was the only one “putting books” away, or doing anything in the physical plane really. Then, of course, there’s that whole scene with Mavis introducing Zera to Yuri. 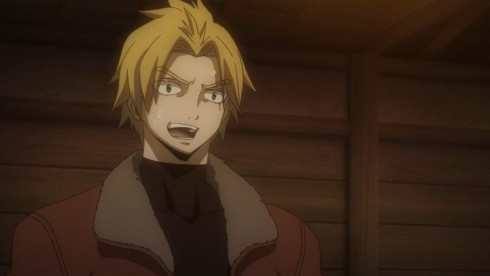 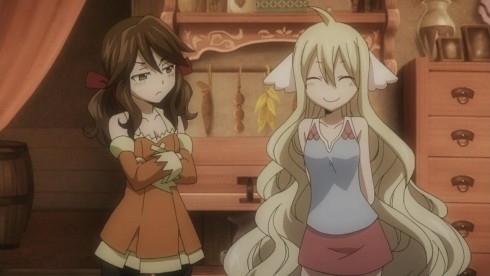 Yuri specifically asks how old Zera is, especially when its pretty obvious just from looking at Mavis and Zera side by side that they’re the same age. Compound that with Yuri’s troubled and bewildered expression at hearing about Zera, and its pretty obvious that he can’t see her.

So… we know for a fact that Zera isn’t alive IF I’m reading things right, but then, what is she? Is she actually a ghost or something like that? Or is she actually just a figment of Mavis’s imagination, something she developed to cope with the intense loneliness and suffering that she had to endure as a very young child. Either answer sounds pretty darn sad, but I can’t help but think that the story didn’t have to be so blatantly obvious about it all. 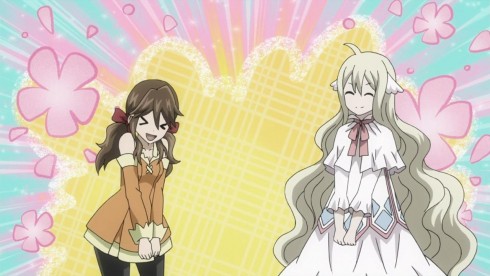 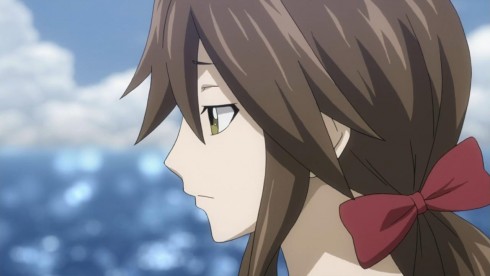 I dunno, I guess I just see the potential for the big twist, the big moment when Mavis realizes that Zera isn’t actually alive, and the shock of it all. A part of me appreciates the idea and wants to experience it, but I’m pretty sure I can’t or won’t be able to now. Its how I felt about Natsu and END. I realized a bit earlier that Natsu was indeed END, and I was darn excited when I figured it out, but the overall impact of the reveal itself kinda suffered as a result.

There is a possibility, of course, of there being something more to it, and I truly hope that is the case. Whatever the end result is, I’m going to politely ask all manga readers to avoid commenting on Zera’s state of living, or her true identity at this point. I don’t at all want to be confirmed or denied on my guess or feelings regarding her, even if I’m right or wrong here. Part of the joy of a story, is not knowing, for sure, what’ll happen. 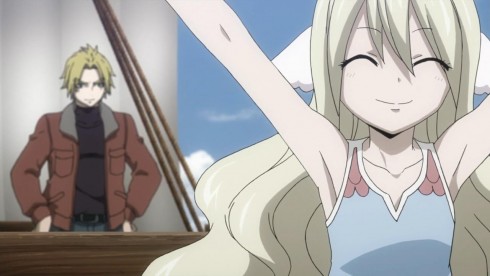 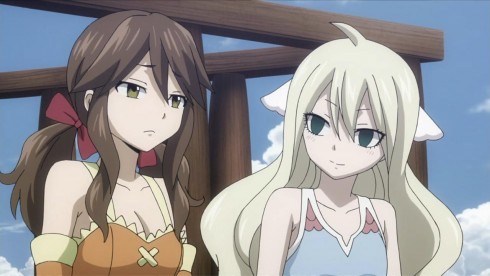 In any case, Mavis is off the Island, with Zera in tow. The adventure has begun, and the smaller cast of characters is actually a welcome change of pace from Fairy Tail’s usual gigantic horde. Episode 2 was another winner, and I’m darn excited to see how Mavis ends up convincing these reluctant treasure hunters to form a Mage Guild with her. Oh! And of course, I’m curious about what “that” terrible thing was, that Yuri mentioned as the episode ended.

All in all, I’d say Fairy Tail Zero is shaping up to be quite the prequel story. And to think, originally I thought this story would be more of a consolation prize than anything else. XD 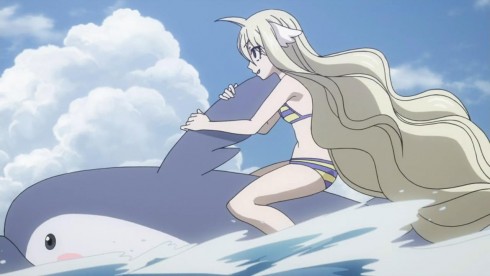 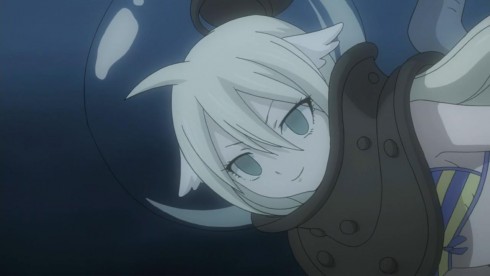 Seems like this next week is going to be filler, simply because I don’t see an episode where Mavis goes underwater to get some treasure to be part of the main story. See you all next week! XD