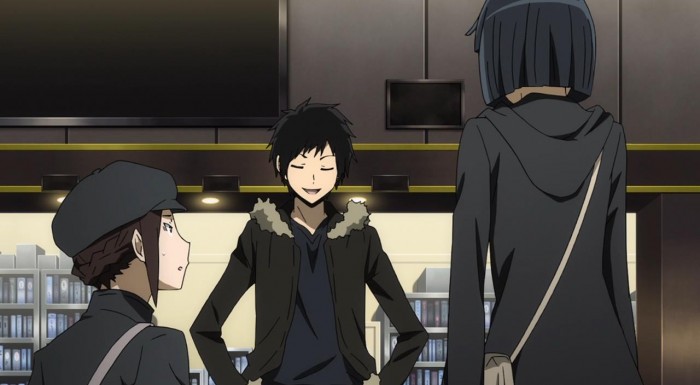 This here, is a dangerous precedent we’re establishing with Durarara!!x2. I’m starting to become hopeful again, excited and invested, again. And given our track record with this second series, and the many times its let us down, I can’t help but feel like we’re falling into the same pattern again.

Its sort of bizzare, but I feel like Durarara!!x2 this week was almost testing the waters in a way. Some notable stuff happened, and some standout moments went down, but it still very much felt like the show wasn’t committing to moving forward with whatever it is its got planned. That’s what’s most frustrating about this sequel I suppose, it goes against one of the prime things that made Durarara!!’s first season so engaging. 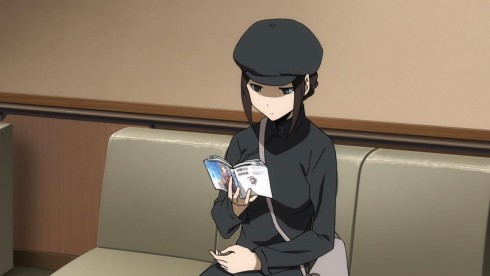 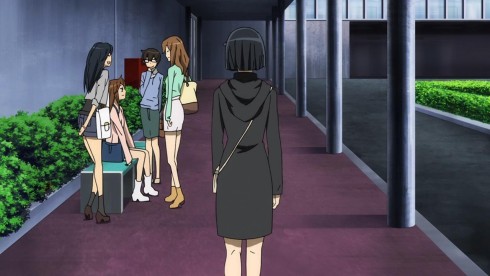 Durarara!!, the original series, didn’t dilly dally or delay key conflicts and plot points for too long. Once it introduced some kind of idea or concept, it wasn’t long before we got into the meat of the idea, and then got a satisfying resolution soon after, before we moved onto the next thing.

Durarara!!x2’s approach, however, seems to revolve around the idea of “death by a thousand tiny cuts” rather than “One, fine and focused slash”. I’m not sure how the story is in the original light novels, but it very much feels like the overall momentum of the story in general has slowed down. Even when it does seem like we’re going to get moving again, the show still seems to have one foot lightly tapping the breaks none the less. 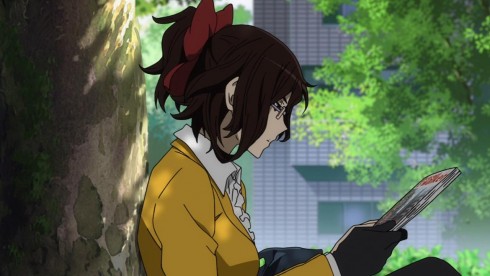 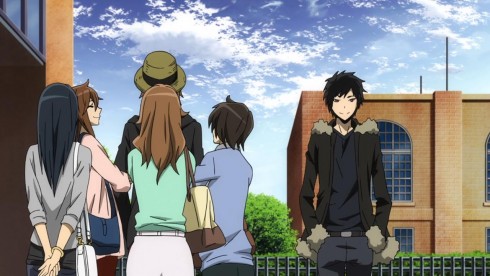 This week we continued our multi-story look at all the different people and groups that seem to be converging on one another. Unlike most episodes, this episode actually had two pretty moments, that kinda defined it as an above average, as far as Durarara!!x2 is concerned anyway.

Thing number one, Anri and Izaya’s little talk. Oh man, did the sparks fly, and I don’t just mean from Anri. Anri clearly wanted to kill Izaya, that was never a question, but it was Izaya’s response that was really surprising. He didn’t mince words, he didn’t sweet talk, or try to stop her from killing him or anything, he just full on antagonized her. 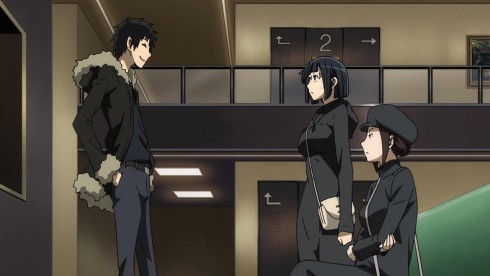 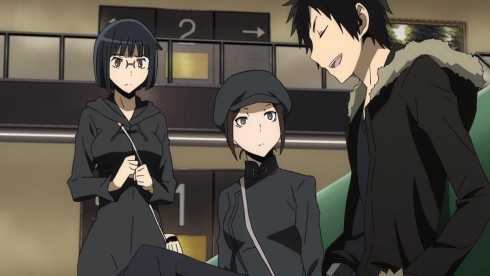 It was a harsh, powerful and bold side of Izaya that we’ve never seen before. Izaya’s always the sly devil, he tricks you and throws you off while doing it all with a smile and acting all friendly. There was no friendliness here, he was more or less looking down on Anri, and putting her in her place, his own safety be damned.

I’ve long bemused the idea of Izaya’s whole “love for humans”. It just always seemed like babble, something he told himself to give his own crazy some direction. This week, I really was sold on the fact that that whole idea is pretty much his mantra and creed. The reason he treated Anri so differently? Because she’s not human, as far as he’s concerned. 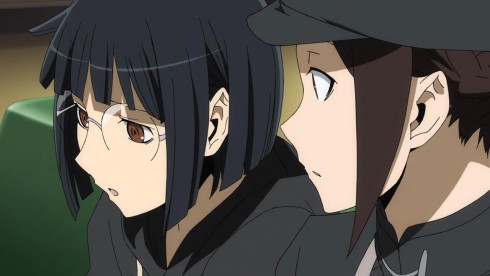 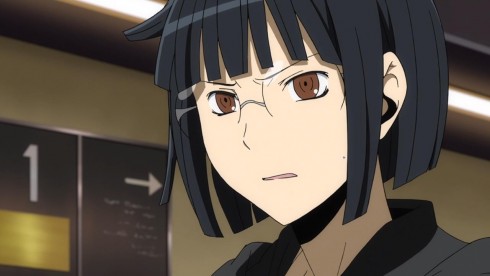 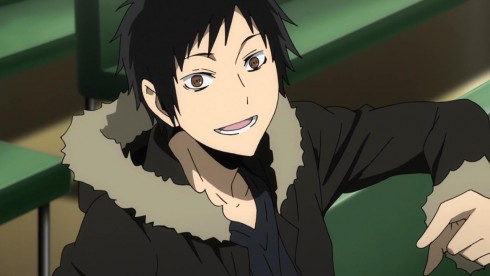 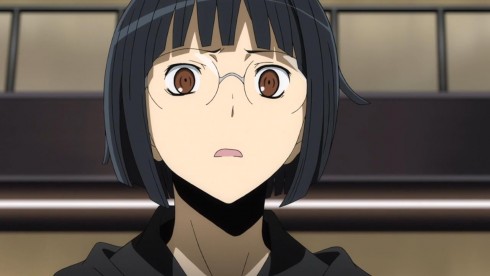 Now, as anyone who’s familiar with Durarara!!x2 will attest to, the main teenage trio of Anri, Mikado and Kida are a pretty insecure and confused bunch of kids. That’s pretty normal, since teenagers rarely know what the hell they’re doing, and its that period of life when you start to find yourself and who you are. Anri though, thanks to both her unique situation and powers, is the most insecure and sensitive of the three.

And Izaya just totally took those insecurities, and jammed them down her throat. Wow… There was no facade there, Izaya pure and simple showed much he enjoyed toying with everyone, and how he intended to do so in the future. 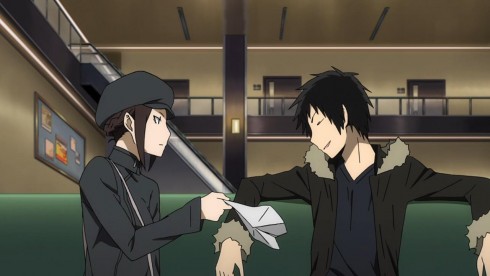 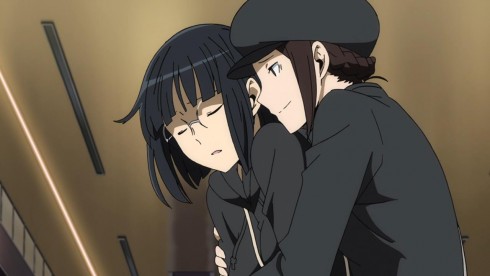 Luckily for Anri and her humanity, Erika was there to put a damper on those sparks, and prevent an all out fire. I like this new role that Erika has in the story, she’s almost like Anri’s life-line, and a proper, emotionally supportive friend. Plus, she also brings in some much needed humor in a show that’s delivered a surprising lack of solid dialogue. The whole Yuri confession joke, combined with her very otaku like analogies, make for some chuckle worthy lines. But more than just being comci relief, Erika’s an older sister, and the kind of friend that Anri needs, especially because of how warped the two boys in her life are at the moment.

Speaking of Mikado and Kida, that’s what I meant by Durarara!!x2 avoiding the most pressing thing its introduced. See in the previous series, Mikado and Kida wouldn’t have started to move against each other until the story was ready to let that whole conflict play out. Instead of getting that, however, we have that whole story on hold, just so the other characters can get to where the plot wants them to be I guess? 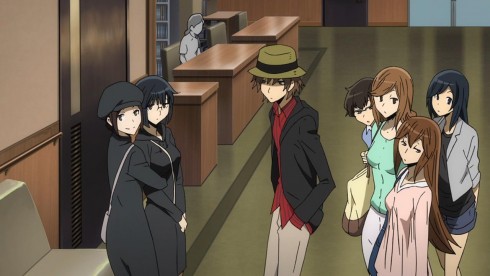 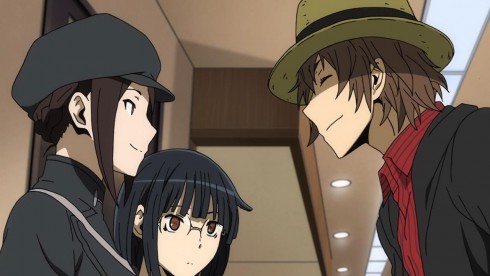 Going back to Anri, while I loved the confrontation between her and Izaya, it didn’t lead anywhere beyond being just a really cool tease. Even when we had Rokujo appeared for a breif moment, it seemed like more of a nod than actually a scene we needed to see. Okay, so Rokujo bonded with Kodata in the first cour, so now he’s pissed and going to look for Kadota’s assailant? Fine.

Actually, I’ll admit that I actually liked that moment, even though it didn’t need to be there. Could we have done without it? Probably. I think one of the other things that sets Durarara!!x2 apart from its preceding series, is the fact that its trying to bring too many characters together. It worked a lot better when there were a ton of shorter, self contained stories in Ikebukuro, but with these multiple groups of characters intersecting every now and then. Kida and Mikado are having a tussle? Izaya, Celty and Shizou will make what I’d amount to cameo appearances. 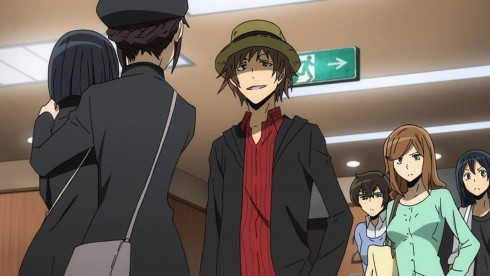 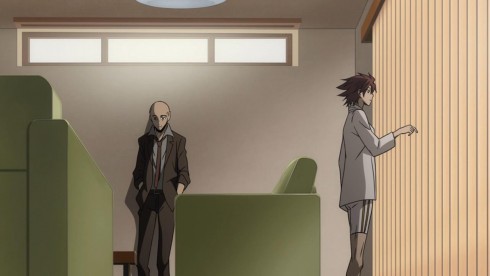 And I just realized that I think that’s where Durarara!!x2’s strongest episodes have been, the ones that focused on a few characters. The Izaya centric episodes, Verona and Shizou e.t.c., those few standout episodes excelled because they weren’t trying to include and juggle the entire cast of characters. I think that’s why Durarara!!x2 hasn’t been a smashing success, it simply went too ambitious and took on too much.

I mean, even going back to Kadota’s whole sitaution. He’s down, and we know that Walker and a few others are looking for his attacker, and now Rokujo’s in on that whole thing too. But we’re not actually focusing on that particular story, because its happening at the same time as Izaya’s whole chess match with Kujiragi, which in turn is happening at the same time as the whole issue of Celty’s head is coming to light. 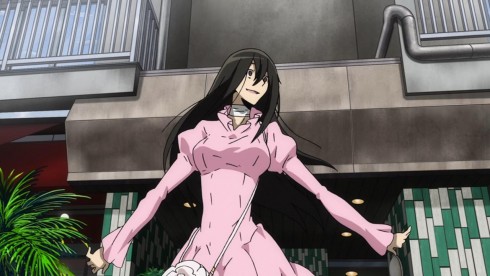 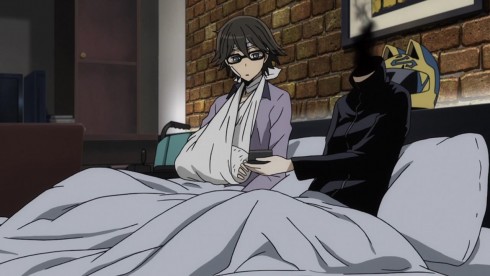 Its all just too much, to the point where all these interesting stories, because of how they’re interlinking and tangling, are actually dragging each other down and just becoming noise. And since I mentioned Celty’s head, lets get into the other seminal moment of the episode, the one that the episode actually closed with.

So Celty’s head was released into the wild, by the girl that tried to kill Izaya, who in turn did it to spite him because of her hate for him. Said girl went as far as to go toward Niekawa, the craziest of the Saika weilding Ladies (that sounds like a pretty sweet band name btw, the Saika Ladies? XD). Oh and, speaking of Niewkawa, she ran into Anri, and they’re about to have their own stand off, not that I seriously think it’ll amount to anything. 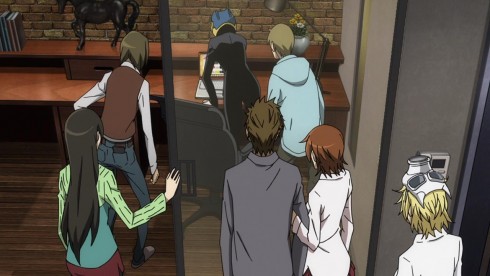 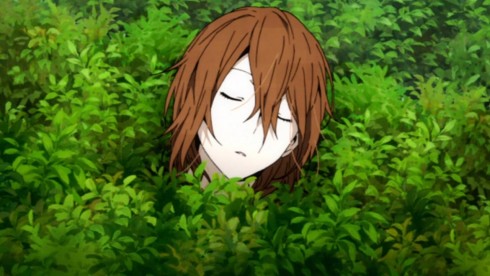 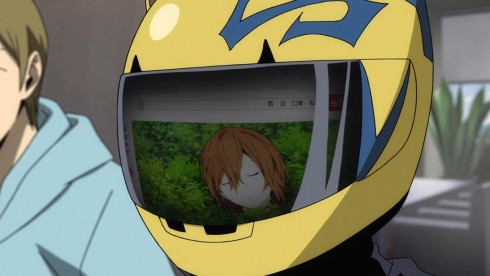 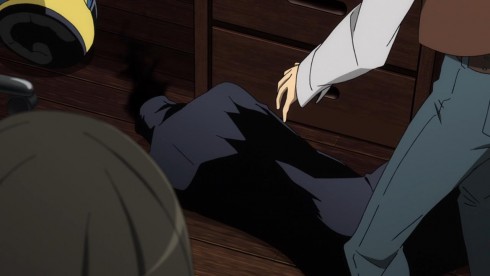 Errr… Sorry, back to Celty. So Celty ends up seeing her head on the news, and just collapses. Why is this a big deal? Because it almost nullifies the buzzkill that happened last week, with Celty dismissing everything to do with her head. At least, it feels like now that Celty’s head is out in the open, and now that she’s seen it, we’re past a point of no return.

And that’s really exciting. Its exciting because this was the big story point that the first season teased, as it ended, with little hope of a continuation. Is this perfect? Is this how I imagined we’d get here? No. I’m still excited though, because it seems like its something that Durarara!!x2 might actually MOVE on. At least, I hope it will. 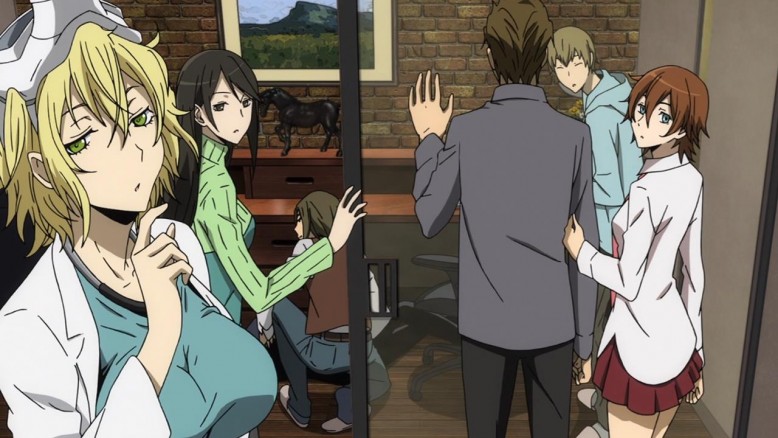 Yeah… There’s too many characters involved, just in this one frame XD

In the end, I see that Durarara!!x2 has been carefully laying the ground work for this huge, interconnected story that has every member of the cast somehow involved. I’m not sure WHY we needed to have that, and quite frankly, I’m not convined Durarara!!x2 has the chops or even the time to do this whole idea justice. Given how much we’ve got, I’m just not sure how Durarara!!x2 can resolve all these disparate plot threads that’s built up in tandem.

Its not even a question of whether Durarara!!x2 can do it, It can’t. If it does, it’ll be nothing short of a miracle. No, what I’m interested in, is seeing which of these big storylines actually gets resolved this season. Does Mikado vs Kida come to a head by the end of this cour? Does the Celty head thing get resolved? Does Izaya vs Kujiragi gets its due or do we get a resolution for the Kadota attack? What I am sure of, is that we’re not getting all these big storylines resolved, so the bigger question is which of these actually make the cut, and which are left off for another continuation that actually doesn’t seem very likely. 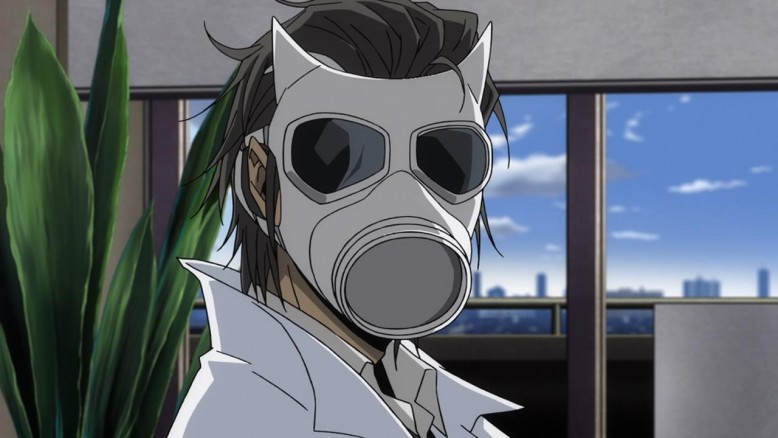 And we have to do without this illogical narration…

Either way, I’m actually excited for what’s coming, so I guess that’s a positive to be had. I’m cautiously optimistic though, and it remains to be seen if next week’s episode doesn’t just pump the breaks again, or introduce something else. I sure as hell hope not, but with Durarara!!x2 you can never be sure, can you? 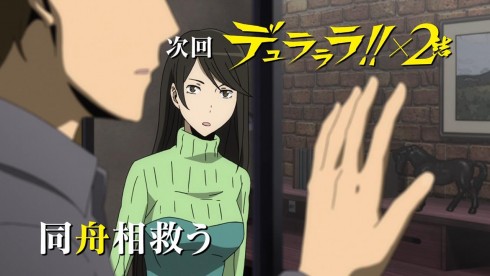 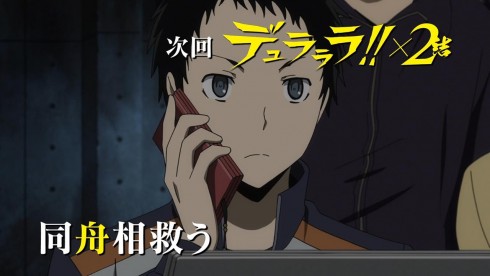 Seems like we’re checking in with Mikado, while things get seriously messed up thanks to Celty’s whole head situation. See you next week!