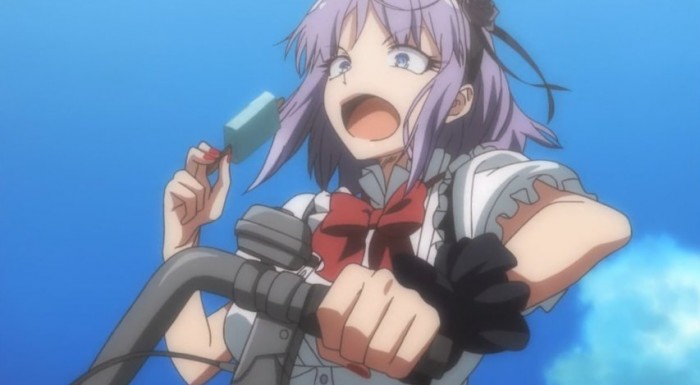 When the announcement was made last September that an anime adaptation was going to be made of Dagashi Kashi I was honestly rather doubtful at first. I had the good fortune to stumble across the manga very shortly after it began being released (around chapter 2 or 3) and the odd, totally off-the-wall O_o and extremely niche subject matter for said sense of humor resonated with me effectively. I have seen other people compare the series’ approach and sense of humor to D-Frag in a very generalized sense, which might work as a possible beginning point … but the manga really is a different sort of bird.

From the get go I have thought that the biggest challenge would be for the anime studio (Feel) to somehow nail the manner of presentation and the nature of the humor, which I thought would be super tricky to convey. If they were able to pull it off it could be a sleeper hit for the season, but … well … part of me just couldn’t shake the feeling that it would be a tough challenge for any studio. 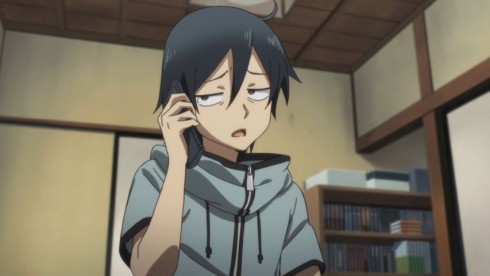 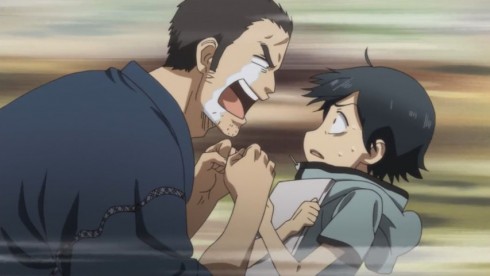 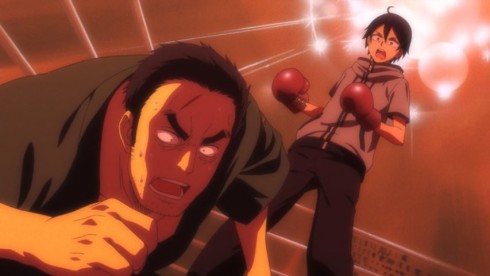 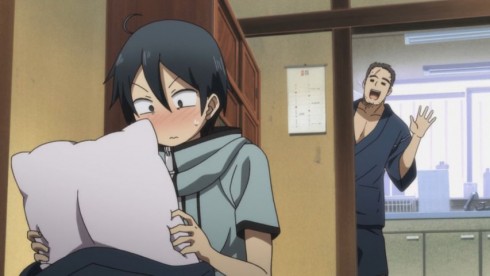 For those unfamilar with the summary here it is: “Shikada Kokonotsu’s father owns a rural sweets shop, and his plan is for Kokonotsu to take it over one day. However, Kokonotsu wants to be a manga author instead! One day in summer, the cute but weird girl Shidare Hotaru, from the famous sweets company, comes to pay a visit. Apparently, Kokonotsu’s father is famous and she wants him to join her family’s company. However, he will only agree if she can convince Kokonotsu to take over the family business!”

Well, if the first episode is any indication Studio Feel did indeed nail the sense of humor – I can’t tell you how many times I literally laughed out loud while watching this episode. 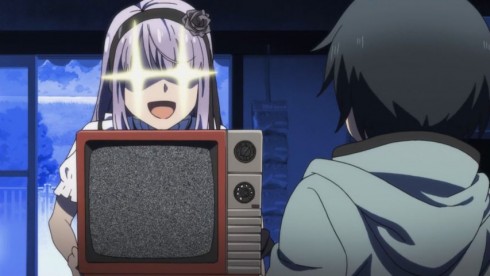 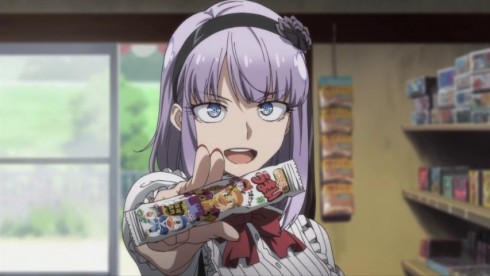 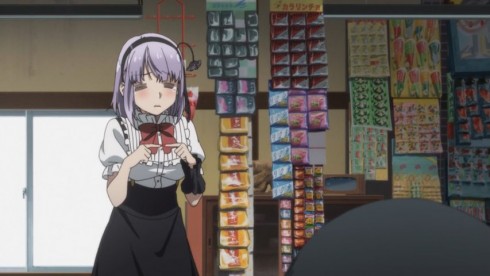 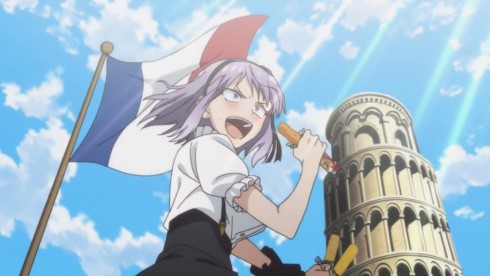 Of course the story itself is absolutely absurd. Essentially the main character (“Coconuts”) is the son of a fun-loving, wacky, odd, nut-job, and has a little bit of the same running in his veins personality wise, but also possesses a raw knowledge and a feel for what makes old school candy not only what it is all about, but intuitively knows how to make the best use of it to maximize its impact and effectiveness. For such a niche area of lore and understanding of the essentials and foundations, Coconuts is a mass of raw, natural talent who has no interest to really cultivate his “inheritance”.

And this is where Hotaru comes in. Hotaru, aside from being absolutely drop-dead gorgeous, happens to be cut from the same cloth as Coconuts’ father (whose name is Yoh). She is equally bizarre, lost in her own world of oddness and drama, wacky and yes … a bit of a nut-job. Oh, and she is an an ojou-sama at the same time. The first scene where Hotaru and Coconuts’ father meet – talk about likeable idiot characters and a random plot! XD 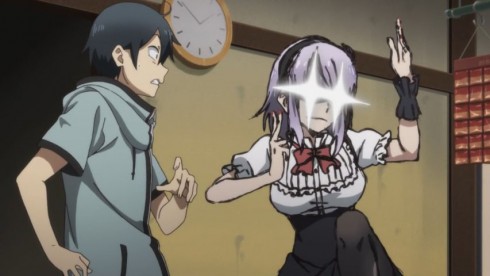 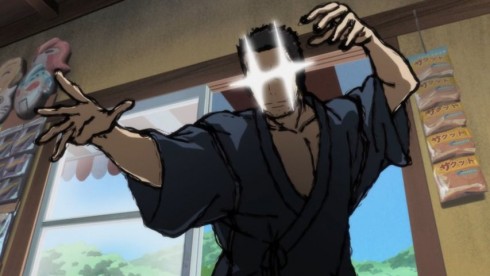 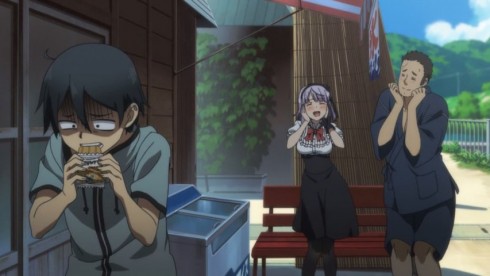 However, Yoh, Coconuts and Hotaru are only half of the cast. The other half are a pair of twins who live in the same town as the Candy Store and know Coconuts well. The slightly older brother of the twins, named Toh, is a good friend of Coconuts, while the younger of the twins, Saya, has an interest in Coconuts that is so obvious I feel almost ashamed typing it out here – hooray for the oblivious male lead trope? Anyway, Hotaru’s arrival not only creates absolute and utter havoc for Coconuts (and is usually either instigated or fanned into a raging inferno thanks to Yoh) with her offbeat “battle tactics” to convince him to agree to inherit the store, it also serves as an occasion for Saya’s jealousy to be triggered at the drop of a hat. Hilarity ensues.

(Oh, and by the way: as a side note, one of the unexpected (?) twists is that the VAs chosen for Coconuts and Toh are the same ones chosen for Touma and Tsuchimikado from the famous “A Certain Magical Index” series. It adds an extra dimension of humor sort of lurking in the background at the same time as the main narrative of Dagashi Kashi itself!) 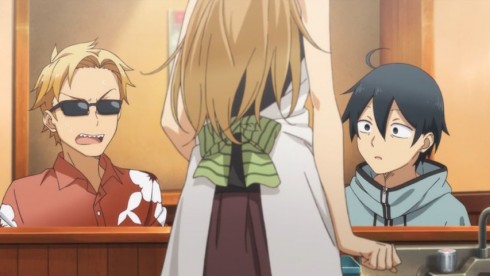 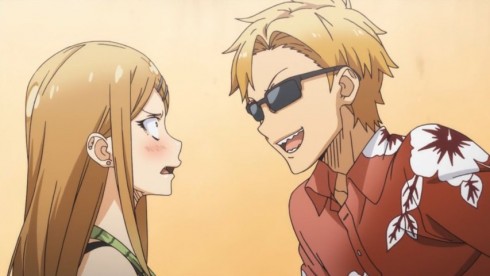 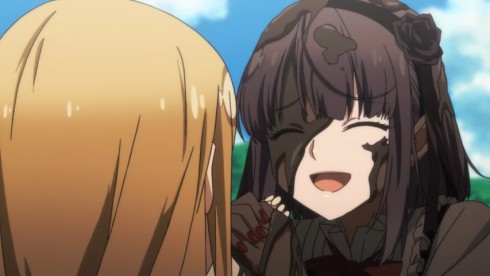 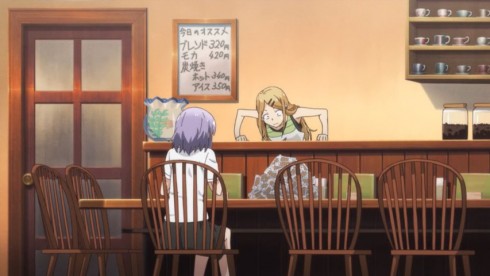 The visuals of this series itself are only decent at best, with a fair amount of the budget seeming to go to making Hotaru look as stunningly beautiful as she is supposed to be, and the audio is okay. For me neither the OP or the ED stood out much, nor did the visuals, though they were not ineffective or out of harmony with the overall feel of the anime as a whole, I felt. No – the strength of this series is definitely in its characters, their zany interactions and the comedic effectiveness.

For me this is definitely a “must see” series of the season. It is a lunatic, oddly educational comedy about sweets marching to it’s own bizarre drumbeat and dedicated to one girl’s battle to make a young man inherit an “old school”, rural candy shop. The first episode was both uproarious and charming at the same time, and if this series is able to keep up the level of its energy and effectiveness of its comedic delivery, it will easily be a mainstay of the season for me.