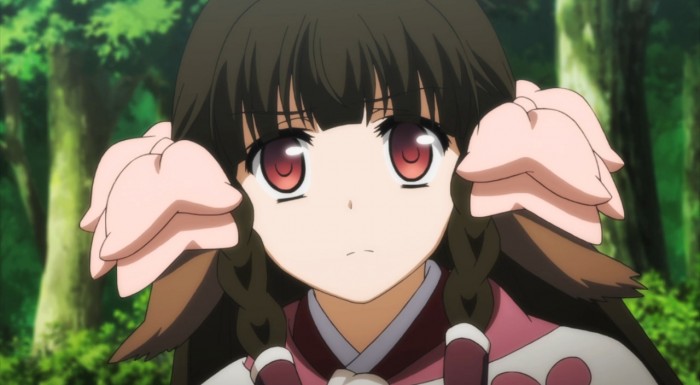 And so the war begins in earnest. This is definitely more of what I was hoping we’d see half a dozen episodes ago. Still, it was good to see the cast get out there and get their first taste of this war. It was especially nice for the show to finally give some focus to Rurutie. She has really suffered character wise with the approach they took to this point. This episode pulled away from her status as more of a comedic character into one who actually has her own problems to tackle. Understandably she was one of the most averse to taking part in this conflict. Just because she’s told to take part in the place of her father doesn’t mean it’s that easy to just do it. You are fighting people out to kill you. This episode really gave her a chance to step up and grow a little.

In the end it was her decision to take the risk of saving the villagers that avoided any serious losses among the main cast. Atui would probably be dead by now if Rurutie hadn’t made that kind of bold move. She gathered up her courage, pushed Haku as much as needed and they got the job done. All without actually having to fight more than a couple guards. Not the biggest issue at all really. Whether she’ll have an easy time fighting in the next struggle is up in the air, but this was a good moment for her. Was able to respect her character some more, just seeing her get involved despite the fact that Haku was constantly giving her avenues to step away. 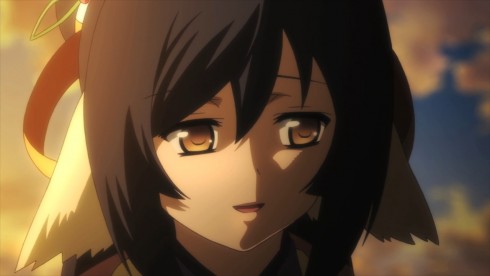 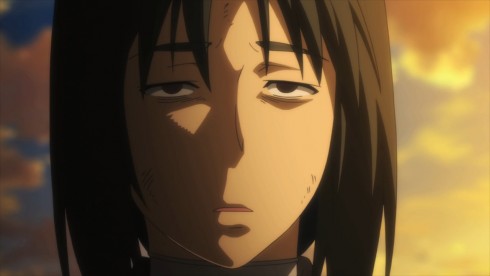 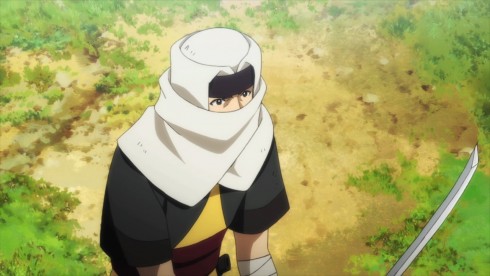 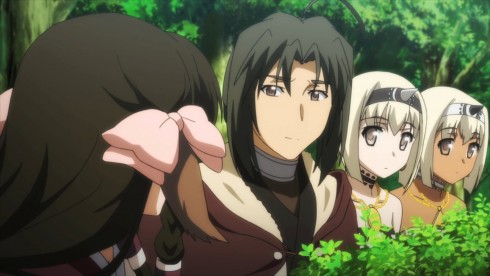 Maybe the only questionable part of the episode was with Haku. There was some comedy to be had to be sure with him clearly being tired and unmotivated while listening to Kuon’s request for him to go along with them. Certainly it’s not outside his character, but somehow I was hoping for a bit more interest at least in what everyone was getting into. To be fair there was some hilarious contrast between their expressions so it wasn’t that big a deal. Plus honestly I’m not surprised he’s basically the “whoa, why are we doing this?” kind of person during this episode. Very much a Haku-like reaction and one that fits who he is currently. Who would want to just walk onto a battlefield really? Is more realistic to say “let’s just hurry on ahead.” Though to be fair his argument that they’d done enough, despite not having done anything at all was a bit odd. Maybe the game had them fight a few scouts or something on the way there?

In the end Haku was useful enough in coming up with a plan to rescue the hostages without actually doing much fighting. Sarana and Uruuru were both pretty darn helpful in this situation. Their magic was a great distraction and made the rescue extremely quick and easy. You could argue the soldiers overreacted, but we did see them being pretty sloppy and disorganized. Drinking up and partying with the village’s food supply. Not a group that seemed too capable. 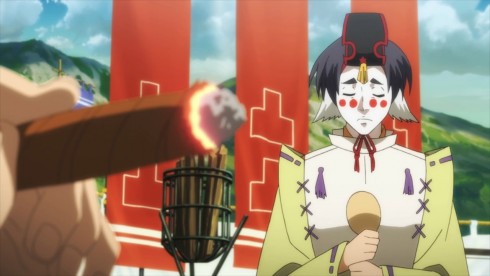 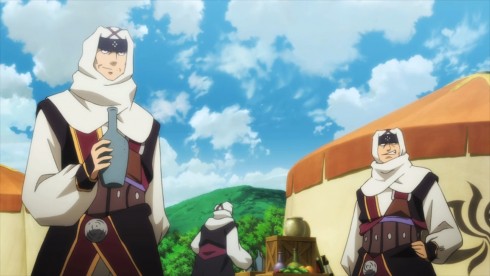 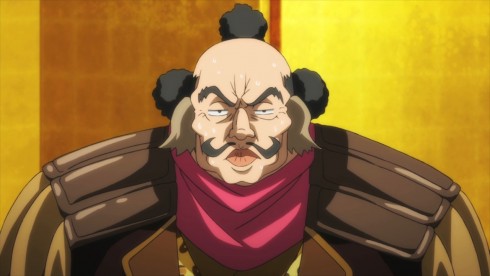 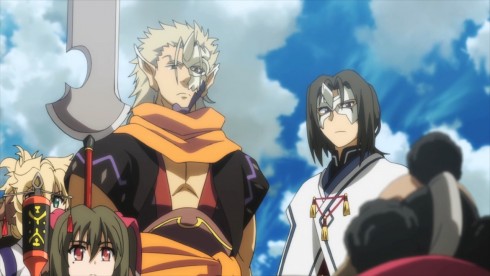 Speaking of not looking capable, we had Dekoponpo. Yeah, his glorious war ended about the way you’d expect. He just stupidly threw soldiers at his problems, didn’t show any tactical sense, and just ignored any good advice he was given. In the end he was left ready to run away from the battlefield and go back home. As if this was some kind of game he could just quit at whenever he wanted.

I feel bad for the soldiers who were killed or injured because his lack of leadership. So utterly arrogant he ignored tactics and common sense. My condolences to Maroro. He has to try and advise that big idiot. Maroro is hardly a perfect person himself and has a mountain of flaws, but he was completely limited in his ability to assist with Dekoponpo ignoring him except when he wanted to complain at him. 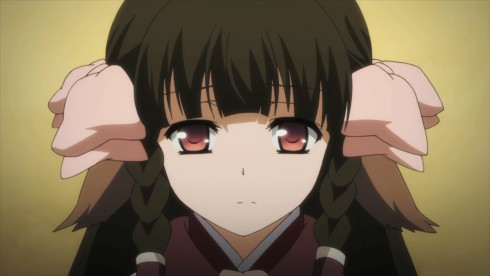 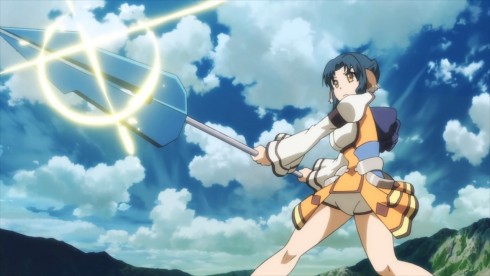 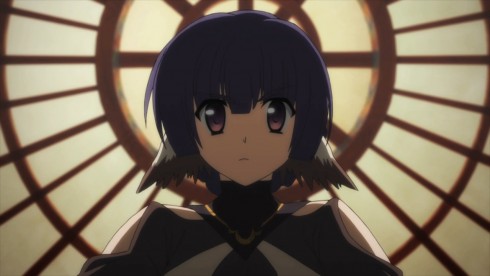 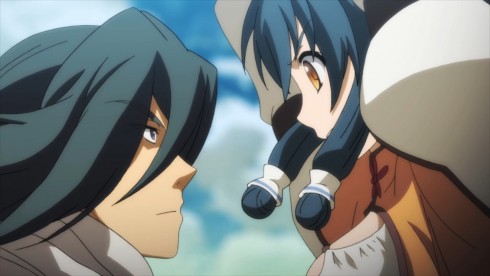 Certainly the focus here was the use of hostages to force soldiers to fight. Now I was a bit surprised that they actually armed their hostages and had them fight like this. Kind of thought they’d just be human shields from arrows or something. But I suppose if you have a village hostage that’s helpful. Still a bit weird. I mean maybe they figured that the other side wouldn’t realize they were Yamato soldiers? Either way it is a great way to fight efficiently (though utterly despicable). Have Yamato’s soldiers just kill more Yamato soldiers. Either way their army doesn’t actually suffer many losses. They even managed to get one darn powerful guy on their side in Yakutowaruto. Atui was in a really bad situation there until his daughter was rescued.

On that front, the fights were actually pretty nice. It was great to finally get a chance to see just what everyone can do. Though it does seem like they will be censoring a lot of the fights. Even against the soldiers that weren’t hostages they didn’t really show much damage being done. Just “enemies hit by something, they go down.” But still, it was good to see the cast doing something here. Atui was definitely the star of the day on that front. Just showing off her physical strength and a fair degree of skill. Was interesting seeing Kuon on the battlefield as well. Not so much using weaponry as hand to hand combat. It worked, no doubt about that. 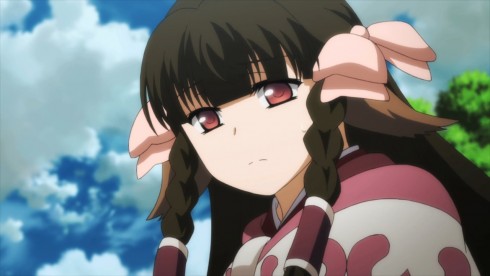 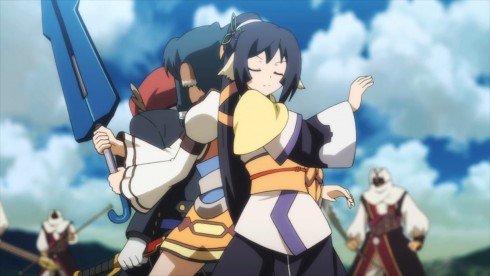 In the end things went pretty well this episode. Oshutoru is on the scene at the end so the war can stabilize a bit. Uzuurussha’s troops won’t be gaining any further easy advantages due to just plain stupidity. And should be fun to see how Dekoponpo is treated after charging out to war by himself, getting utterly humiliated and in the end preparing to run away like a coward. Of course I’m also curious how the characters get involved in whatever happens next. The enemy does have some skilled warriors and generals. While Yamato clearly has an overwhelming advantage they do have to play it smart. I’m also a bit curious why Uzuurussha would go ahead and burn down villages. It’s not like they are just pillaging and going back home. You want to take their territory. Wouldn’t it be nice to have intact villages you could move your families to and start up their lives there? Oh well, it probably has some purpose, but just something I somewhat questioned.

Looking forward to next week.