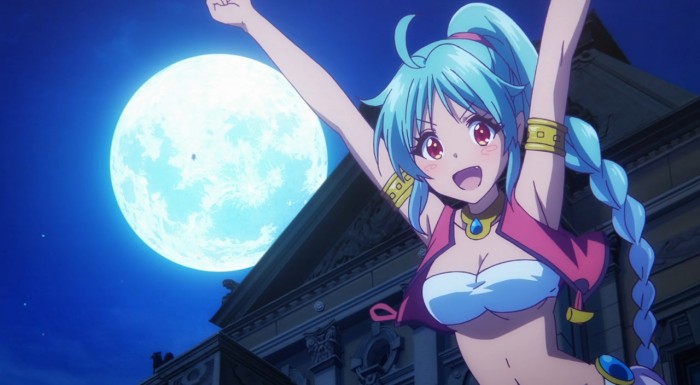 And so the Winter Season has started up! Gone is the somewhat quiet break between the seasons and now we’ll be going full steam ahead with new shows and the carryovers. Starting things off is Musaigen no Phantom World or Myriad Colors Phantom World. As always with First Looks there is no guarantee I’ll continue blogging the show, but it is a possibility. For now can at least say I’ll be watching episode 2.

Certainly a show that starts off with a pretty quick pace to it. Not too fast, but the shows feels like it is certainly on the move which wasn’t a bad thing to start things off. I think the setting for this is one that can allow for some fun episodes. We got to see three very different encounters in this first episode. Haruhiko and Mai literally were fighting with a phantom in the early going, Reina just plain ate the phantoms and that fake cemetery, and finally they had a limbo showdown with the last bunch of phantoms. The end results is that they need to stop or appease phantoms causing trouble and generally seal them. But how they get to that point can very drastically differ depending on the time and place. More peaceful (though perhaps not safer) methods can reduce the damage to the area and thus make sure the group gets a fair amount of compensation for their activities. 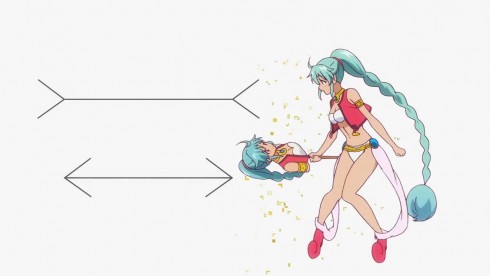 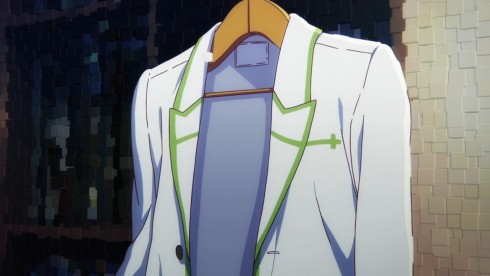 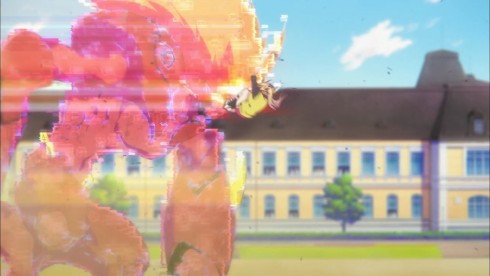 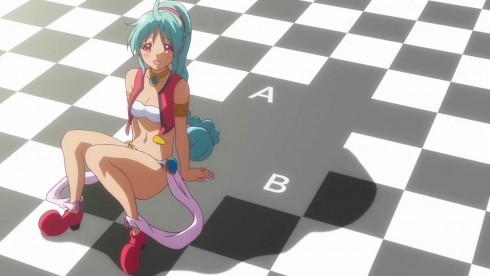 I do like the idea that basically this is a regular world that had a major shift. Not one of dimensions or magic, but rather biological. A chemical disaster that lead to the very biology of the human brain changing. It was a nice touch to start off with all those standard examples of optical illusions. Certainly perception isn’t often a reliable thing and if something drastic happened that very literally changed how people perceived things, the world itself would change in a big way. The setup is good as well for why students are the ones doing all this. It was only a little over 10 years ago that the terror attack on the chemical plant related to this happened. And the ones who are gaining these special abilities are basically the children. So you are going to only have a very small group of people out there that have gained the powers to actually deal with these things. As time goes on that will change, but for the current time you basically do need to push the job off to kids.

The start of the episode was pretty nice in terms of giving information, but also just that first scene where Haruhiko wakes up and his room looks so bizarre. Taking time for the room basically to form and become more solid and clear. All about perceptions so in a sense even his room isn’t really there until he is perceiving it all and is fully awake. It might have gotten distracting if it was like that for every scene, but it was a nice style choice to start the show. In the visual sense I’m quite happy with the show. The cast looks nice, the animation seems pretty good, just KyoAni doing a very good job as per usual. 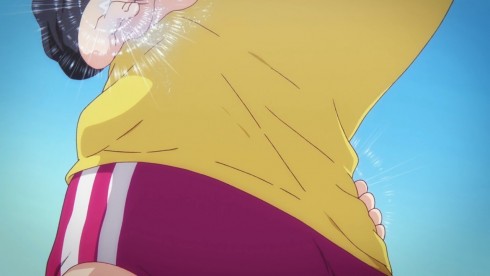 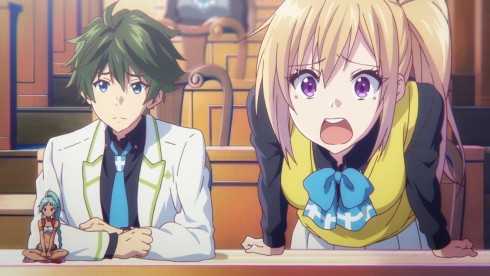 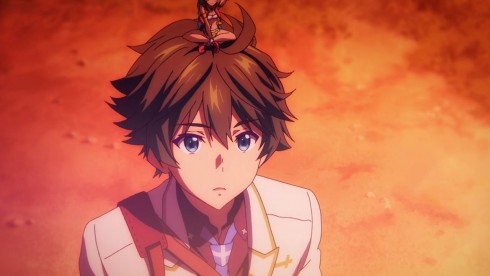 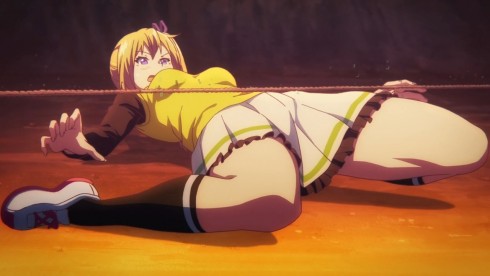 Certainly one can’t avoid talking about the fanservice aspect to the show. It’s clearly there in various scenes. Though one thing I do like is that the show is getting more creative than the usual series would. I mean when was the last time you saw that kind of limbo tactic XD? They just seem to be having fun with it. Almost getting into the classic girl falling onto the guy and he accidentally grabs her into the guy flipping himself over to avoid that, to the girl getting flipped before she lands on him so her skirt kind of lands on his head. A few fake-outs helps I think. Plus you never actually see anything in that Reina scene, it’s just the pattern is basically imprinted on Haruhiko’s eyes. I have no doubt there will be more fanservice than people are comfortable with, but if they continue to stay creative and having some fun with it that’s fine. For me it’s good enough to just not continue using the standard jokes in the standard way.

We’ve seen just about all the cast it seems for the main group in various scenes. The most focus being on Haruhiko, Mai, and Reina. You get some understanding of what is going on with these characters, but obviously it’s too early to know everything. Haruhiko is a crazy reader. That guy’s probably read more books than anyone I know. Plus his ability is art based. Drawing the phantoms in order to capture them. Definitely not a main character who is going to be active on the front lines. Instead he’s more the information source for the team. With all he’s read he should be able to understand most of the phantoms they come across and how best to deal with them. A pretty solid harem lead who as a reader is well aware of any potential clichés he might be walking into. 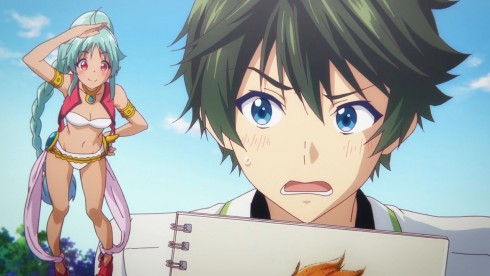 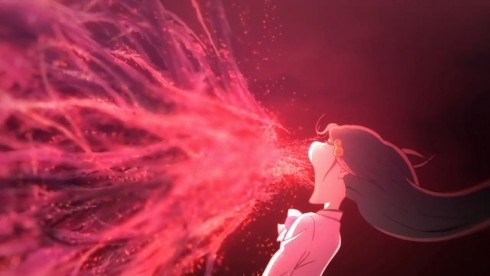 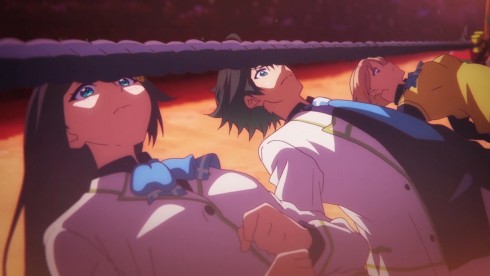 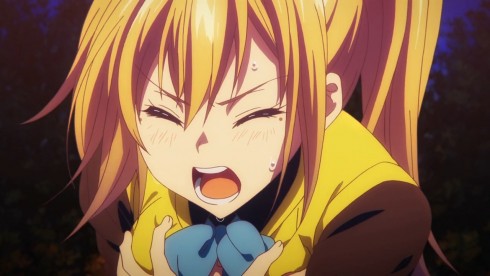 The other two are nice characters from a first look. Mai is a pretty darn active individual and one that will do what she has to even if it’s a bit embarrassing. Her ability requires her to basically rub different areas from her sides to her chest to channel a specific element into her fists. Using the classic Chinese elemental system. But she’s also the character most determined to get into these phantom jobs. Living on her own for whatever reason leaves her needing the physical goods the school pays out for their activities. Saves her money from having to buy those things herself.

Reina is certainly an interesting girl from the early going. Seems to be a rich girl who has come to this school though for some reason she has no allowance and thus can’t get as much (or any it seems) food for herself. Makes you wonder about her personal situation. Sure she can eat phantoms which helps her, but it doesn’t solve everything. While not as athletic as Mai she seems to be in good shape and plenty strong.

And of course we have Ruru, the phantom that for some reason is hanging around Haruhiko. Kind of seems to be the fanservice support of the show, pointing things out to embarrass Haruhiko. Though it does seem like she wants to help, actually assisting in getting him awake and off to school on time. Curious to see how those two met up in the first place. 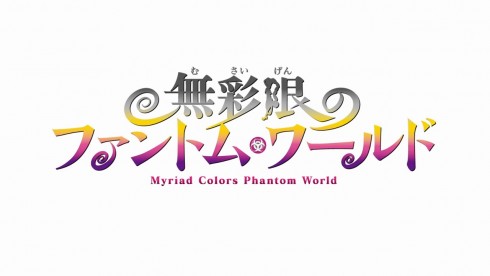 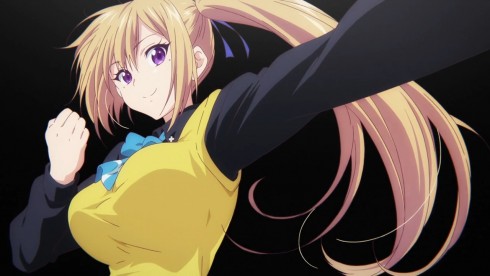 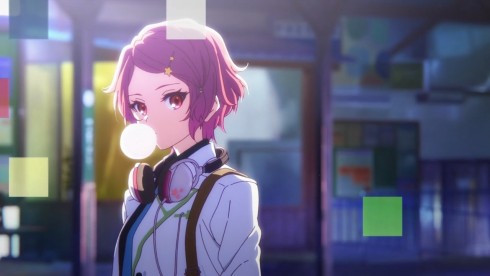 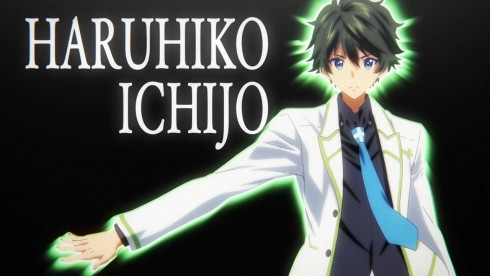 Will say overall I enjoyed the OP, it may not be incredible but I like it. The energy and the song is pretty nice. It goes well with the active visuals and the scenes of action that are in there. You get to show off the main cast a fair amount, get an idea of their abilities and who they are. It isn’t all that complex, but has a good tempo and is the kind of OP that can get you charged up for this kind of show. There isn’t much to say other than I found it pretty fun. 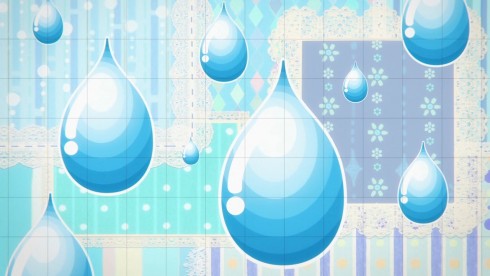 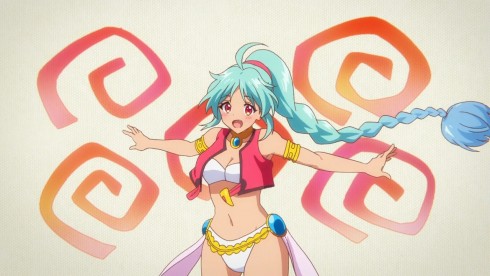 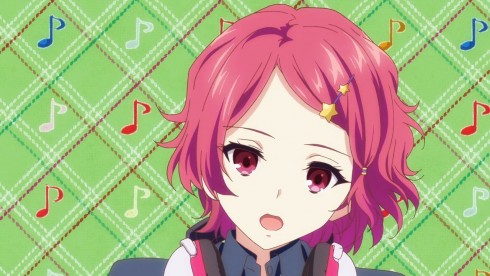 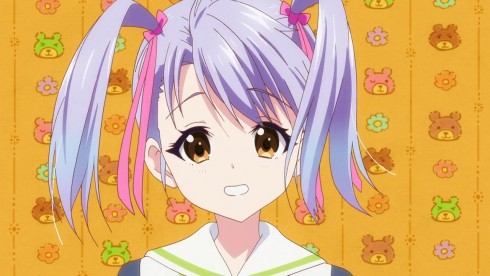 The ED was equally energetic which is ok I think. Sometimes it’s nice to have a slower ED to let the show quiet down, but I do like the song for this one. A lot of scenes of Ruru flying around a changing backdrop with various weather effects. But it doesn’t lock into just that. The focus is heavily on Ruru (probably a given since her VA is singing the ED), but we also see the dog and octopus combo from the OP in there as well. I’m guessing they are going to be other phantoms attached to Haruhiko? If he knows so much maybe he’s just a natural phantom tamer, able to get these critters attached to him. The other female cast members make brief appearances, but it is mostly the Ruru show. A very nice and visually bright OP. 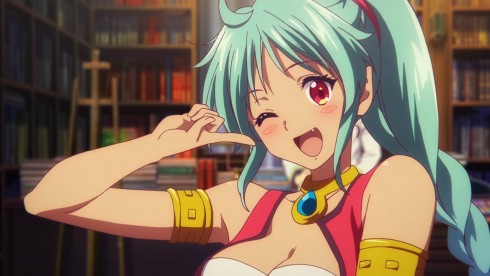 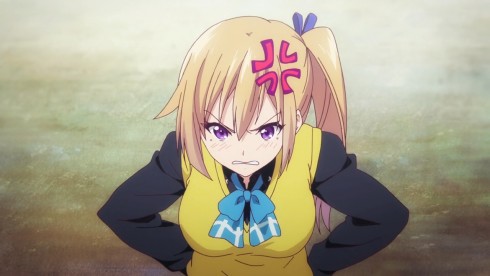 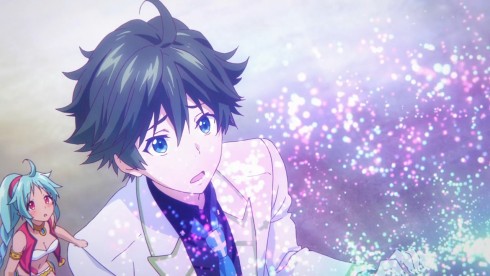 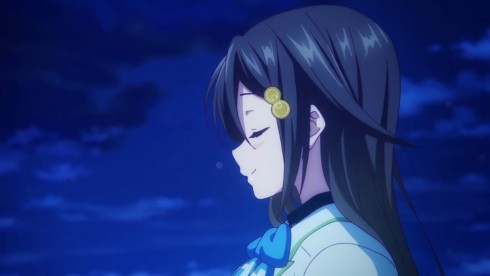 This is a nice start. I had fun watching the cast deal with these various phantoms and getting to know the world a bit. The setup seems pretty good and could be a nice and enjoyable show. I enjoyed the pacing for the first episode and the various situations the main cast is getting into. We got to see a brief shot of Koito and Kurumi who I’m sure we’ll see more of fairly soon. Will wait to talk about them until we really get more scenes with them. The show looks good and seems fun. Not sure how good it will be overall, but it should be an enjoyable ride.