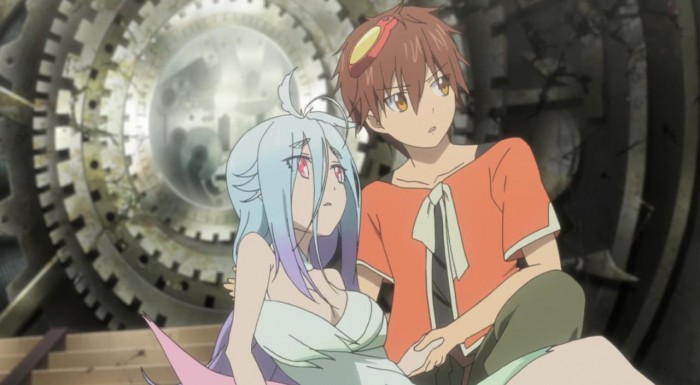 What a hot mess. I’ll give this one thing to Comet Lucifer, it genuinely surprised me with its last two episodes. The surprise came, however, from how terrible these last two episodes were, and how they completely and utterly dragged down the overall quality and appeal of what was always kind of a mid-tier series. I honestly, didn’t expect much from the finale going into it, as Comet Lucifer has never really been a series with strong writing chops or any grand ambitions in terms of story. But this? Man… That was just utter and complete nonsense, thrown in with one of the most generic and cliche endings I’ve seen in a while. 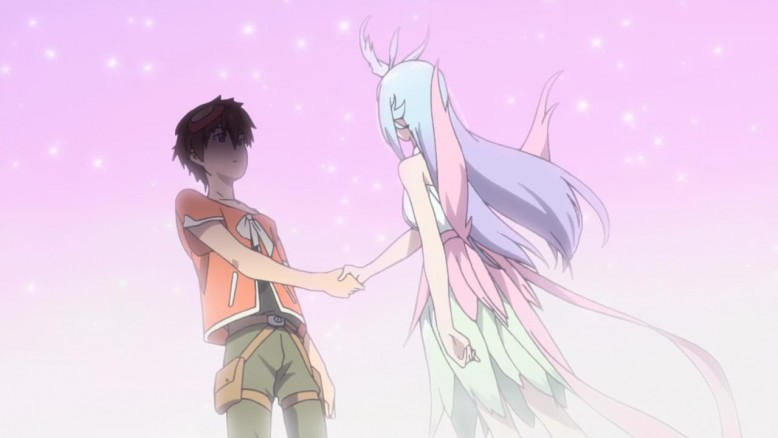 Come with me Child, I’m going to give you true despair. Its time to Ruin everything! #_#

I don’t think I’ve felt this insulted from a show’s writing, as I did with these last two episodes. The writing felt phoned-in, lazy and almost felt like filler to get us from Point A to the finish line, logic, character development and just overall entertainment be damned. And what’s sad I guess, is that there are some flashes of brilliance tucked in, hidden and buried among a pile of garbage and throwaway content.

For one thing, even in its last two episodes, Comet Lucifer looks beautiful. It isn’t beautiful from an animation perspective, its fairly average in that respect, but the art direction… Wow! You can tell that the animation studio, and particular the concept art and background artists did such a phenomenal job on a series that, quite frankly didn’t deserve it. 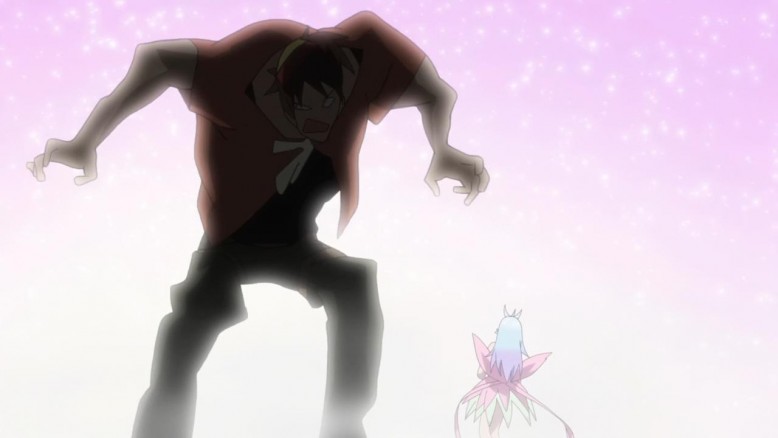 The weakest link with Comet Lucifer has always been the writing and story, something its kind of been able to deal with because of its few central likable characters. The problem is, the story gets so bad in the final act, that it completely and utterly destroys and tramples on those lovable characters. Any sense of who they were, and what made them likable is thrown out the window, in favor of some generic mecha battle, some plot to save the world, and the fact that basically certain things had to happen, character agency be damned.

And to be honest, even in there, there’s some good ideas. The whole idea of Secretary-face (I really don’t care what her name is) being a fallen angel that was unable to protect her Angel? Not bad. And referencing Earth as the so-called lost Planet? That was kinda nice. But the appreciation I had for those ideas was fleeting in seconds, because said Villain kept changing her goals and “evil plan” every two seconds. 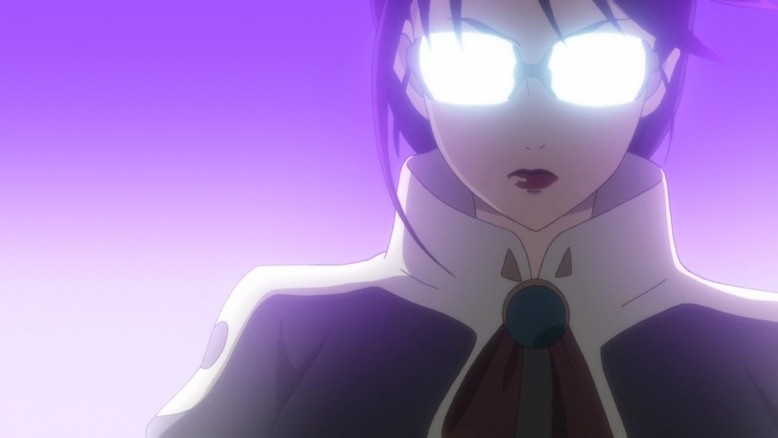 First Secretary-Face (yes I’m just going to call her that now) wanted to become the Guardian to “Gift’s” (That’s the name of the planet) Angel. But then… She just couldn’t wait because… waiting sucks? So she then manipulated Zoneboyle into doing whatever evil plan he did, because God knows its never explained. For all we know, Zoneboyle just happened to be an old snile coot in power, and it just so happened that Sogo found Felia at just the right time.

Its just so utterly and completely “bad” when your entire plot is reliant on a bunch of unlikely coincidences. So yeah, Zoneboyle was nothing more than a plot device, that was entirely and utterly uneeeded. I don’t see why Secretary-face couldn’t have just done his job and hers? Why did Zoneboyle get what limited amount of screen time he had, at all? There wasn’t a point was there? 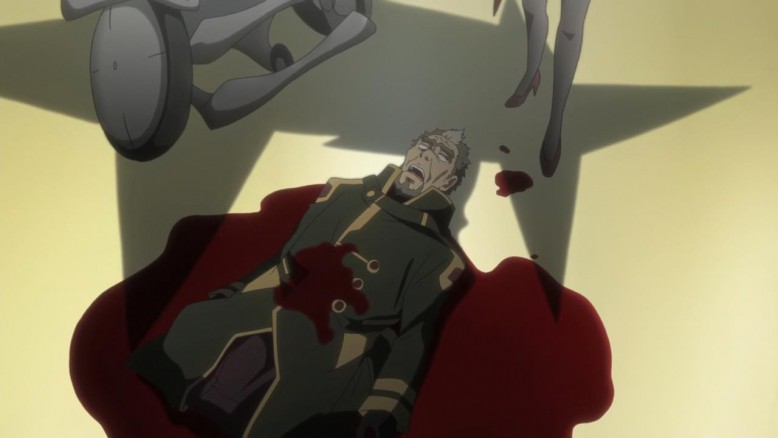 This is what a throwaway plot device looks like… Its not pretty is it?

But I digress… I was talking about Secretary-Face’s plan. So when she couldn’t become the Gaurdian for Felia (Gift’s Angel), she decided to recreate Earth by draining Gift entirely of life? But that didn’t work either, because when Secretary-Face captured Felia, she found that she didn’t have “the key”.

Who had “The key”? Sogo of course. That mark that Sogo uses to control Moura and he got at the start of the series? That’s what Felia was supposed to have apparently. So then, Secretary-Face just switches gears and takes… Sogo? Why does she want the key? So SHE can become an Angel? Its possible because Angels and Guardians are made from the “same seeds”, whatever that means. Even the last minute switcheroo with Felia basically saving Sogo wasn’t going to fix all these problems and the great voice acting wasn’t going to save that nonsensical dialogue. 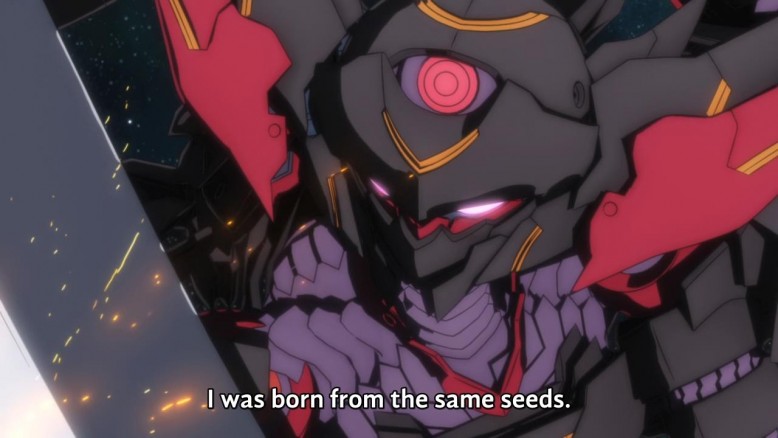 The Seeds of Stupidity? And Why did your voice change to a generic male cartoon villain?

It was at that point, that I really just knew the show was messing with me. It had no idea or plan for how to bring context and sense to the big giant battle it was showing the audience, and instead opted to thrown in some crazy ham-fisted reason for its last minute villain to spout out.

Its almost comical how bad the dialogue is in the last sequence. Secretary-Face goes on and on about her grand plans to become some kind of new being, a few minutes after she spoke of her grand plan to revive earth, meanwhile Felia’s big retorts are: “Do you HAAVE to?” and “You’re Awful!”. 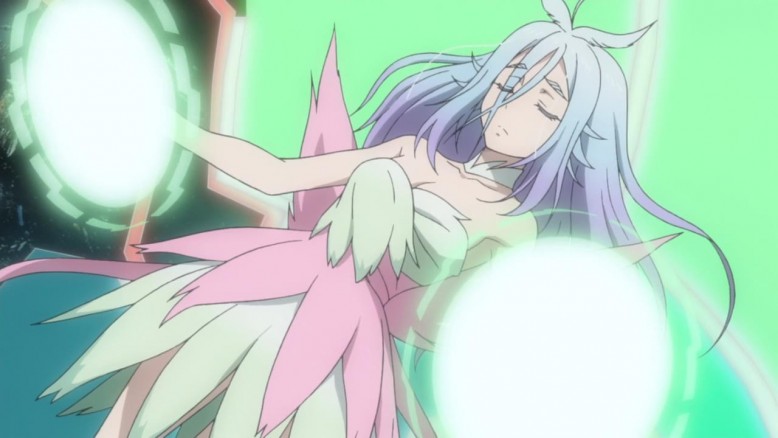 Felia – The Queen of Comebacks.

Uh yeah…. Thanks Felia, I think we got that when the lady took you prisoner and killed Do Mon. Speaking of Do Mon, it seems like Do Mon’s death is really the answer for world peace. I won’t even dignify Vee’s reappearance and the “bread is a shotgun” moment with anything more than stating it. Just wow… I really want to know what the production staff felt like while animating that whole scene, because it was so jarring and bad, that I couldn’t even laugh at it.

So Vee’s big moment is to come, guns blazing and somehow save Sogo and Moura because she has… a Shotgun and a few machine guns hidden in her bread? I still don’t get how the entire military, with their tanks and big canons were stopped short by a bread baking, gun trotting crazy lady. I don’t think Comet Lucifer even paused long enough to THINK what it was doing there. 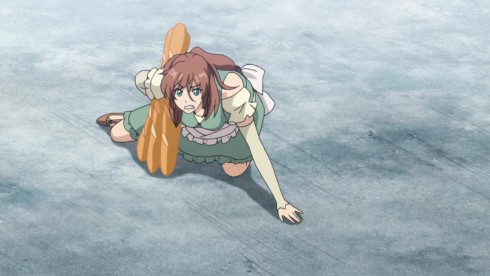 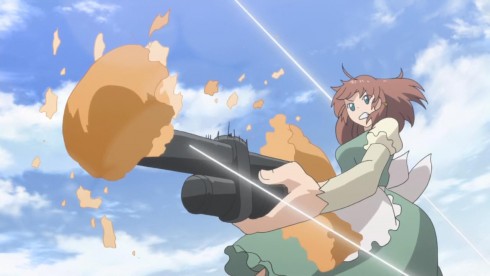 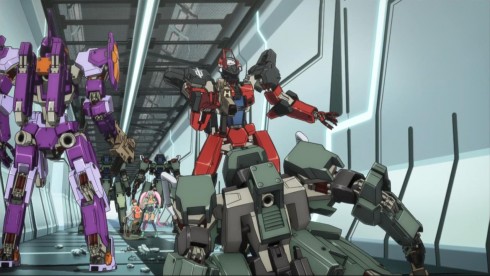 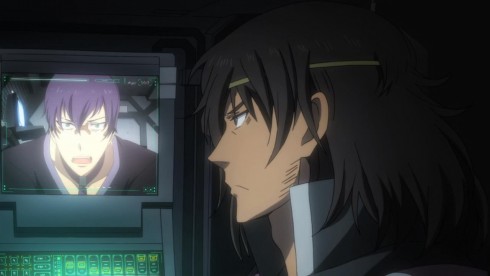 And Those so called villains we had in the series? Gus and his group? They flat out do a 180 and become good, noble people… Because? Well… God knows why! Okay I get that Gus might want to avenge Do Mon, but erm… Why are Puck and Purple Otaku-man being do-gooders too? What an utter and complete waste all the battles with them really were, because they just get away with everything bad that they do in the series, because the plot decides to make them into heroes at the last minute.

That’s the big problem I guess, with the last two episodes. They render the entire series and all the events that transpire pretty much meaningless. Its one thing where the conclusion doesn’t quite live up to the journey it took to get there, its another where the ending just completely spits on the journey itself. 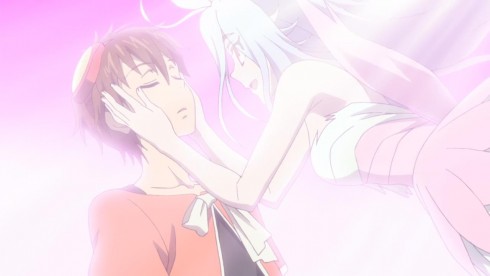 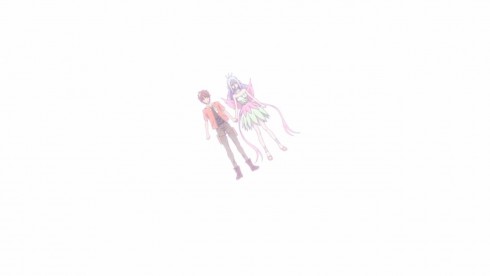 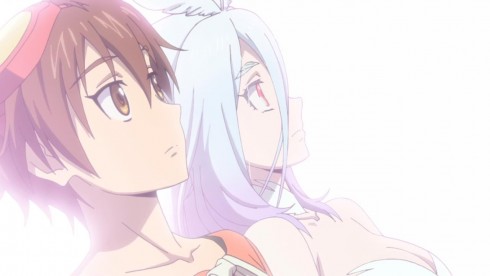 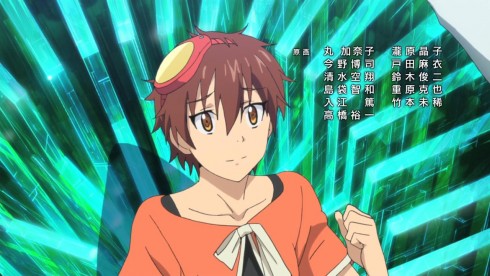 In the end, Felia just confesses to Sogo, and Sogo is saved by her hugging Secretary-Face’s mecha form while piloting Moura. And then Moura dies, Felia becomes a star in the sky, and Sogo is saved by… Roman and the rest on the ground. Sogo isn’t even sad, he’s just glad Felia told him she cared for him I guess? Why then did we have to suffer from the constant shouts of “I WILL save Felia” in episode 11? You didn’t really do much did you Sogo?

As for Roman and the rest? They don’t even get the decency of an actual scene to resolve their character arcs. Roman and Kaon get married in a friggin credits montage, and then Roman goes on to become some kind of space tycoon, Otto becomes a friggin astronaught, oh and friggin Gus starts a restaurant… like Do Mon did.. Because Gus idealizes Do Mon like he’s some kind of prophet. 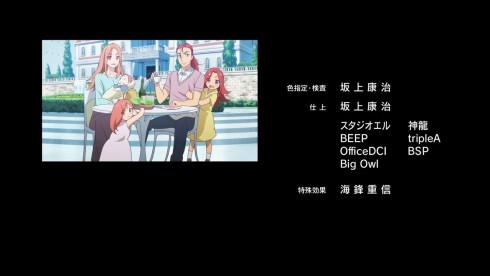 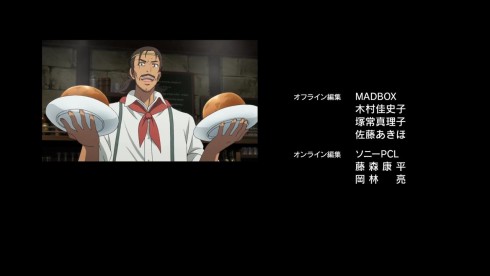 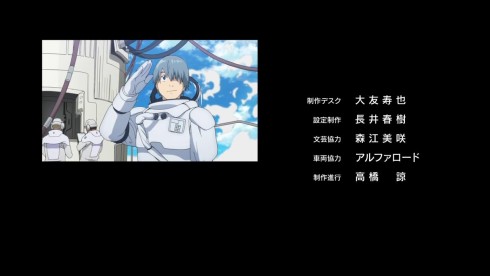 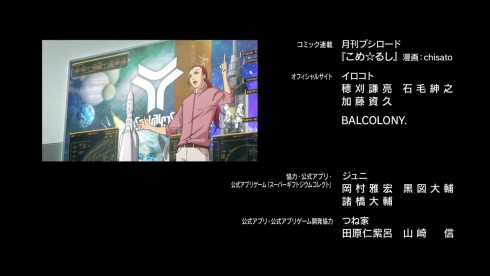 Sogo ends up forever alone, and the series ends with him back on some random cliff, looking at the star that is now Felia. I just… there are no words. There are no words Comet Lucifer… No Words.

I realize that this post ended up becoming a garbled mess of a rant, but this is all I’ve got to offer after watching and finishing Comet Lucifer. A series review (when I get around to it) will probably have a more structured and overall panning of the series as a whole, but I guess this post is what I felt immediately after watching the last two episodes. 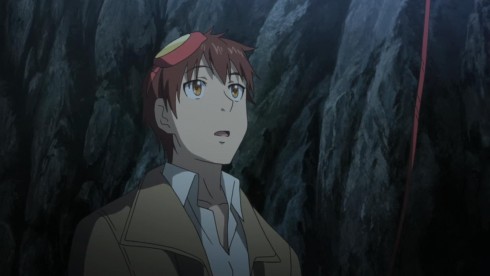 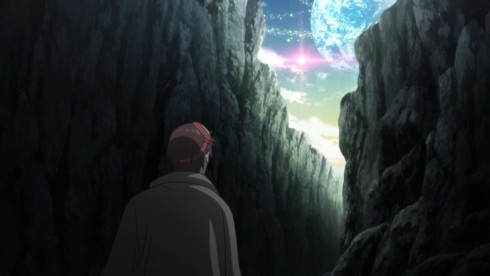 Was Comet Lucifer a good series? No. Was it passable as a time-killer? I’m not even sure. What I do know is that the ending for the series was just such a terrible cliche mess that I can’t really remember the good times all that well. They existed, but I felt like the series went downhill from when Purple-Otaku-man was introduced, and then just plateaued for a bit, before taking its ultimate nose dive.

I called Sakurako-san my personal favorite series of the Fall 2015 Season, I called One Punch Man one of the best anime ever made, and Perfect Insider was just kind of doing its own thing. Comet Lucifer? The biggest disappointment of 2015, and given how I was almost lukewarm on the series throughout most of its run, that’s kind of a big achievement there. I guess… 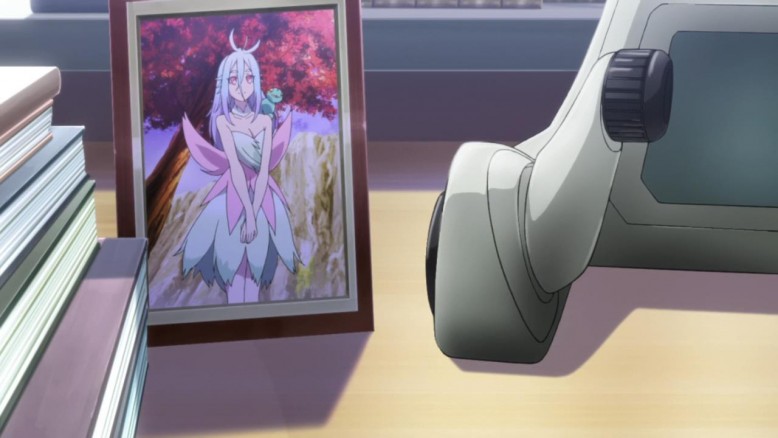 Just push those books in front of the picture, and we’re all good.

I’m going to go now, and dream of a series where Kaon didn’t get the shaft and Felia remained the adopted child of Sogo and Kaon. Scratch that, I think I’ll just forget this forgettable series and move on I suppose.