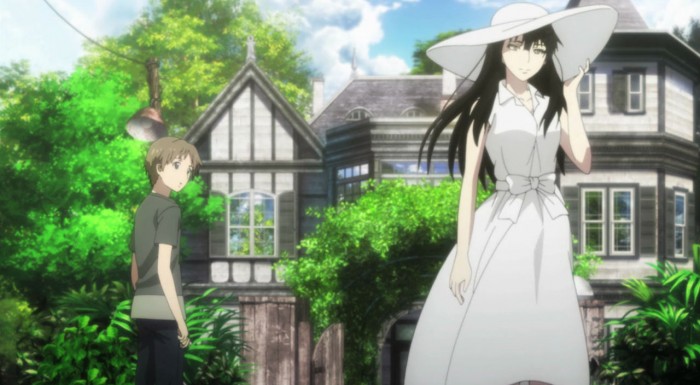 What is a show to do when its reached its final episode, while not even being remotely close to the actual conclusion of it story? That, is the kind of question that we seem to run into nearly every season, and I don’t think it gets any easier with repetition. Long gone are the days when anime series were created to be stand alone pieces of entertainment, and more often than not, they really are just glorified promotional pieces for their source material.

And while a good show can definitely do wonders for its source material, whether it be a manga, or in Sakurako-san’s case, a Light Novel series, there’s always the issue of how to end a series. Some shows do it better than others, finding some kind of arbitrary stopping point, or merely ending at what you could loosely call “the end of chapter 1”.  The worst offenders, are obviously those which go with the latter approach, often times ending right as things get really good. The best shows are obviously the ones that kind of resolve some kind of story arc, and end things in a decent enough place, while obviously leaving room for further adventures later down the line. 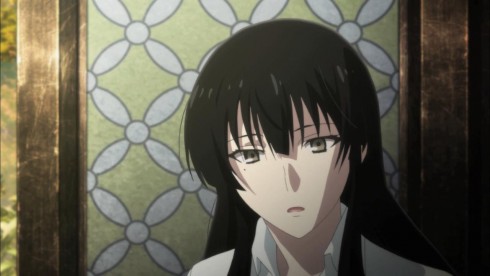 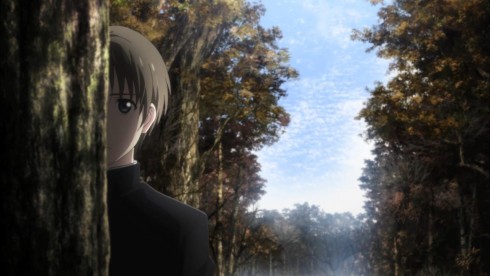 Now… What’s interesting about Sakurako-san no Ashimoto ni wa Shitai ga Umatteiru is the fact that it actually ends up falling somewhere in the middle of those two approaches. The last episode of the series, actually ends up providing a sort of conclusion to one major facet of the story, and its almost a decent ending But… Its also got that sense of loss and disappointment that is often felt with unfinished stories ending prematurely.

I think what actually makes episode 12 of the show partially succesful though, is the fact that it almost reframes the entire narrative crux of the show, albeit in a slightly artificial way. How much you end up liking this week’s conclusion is largely based around the value you give to certain parts of the story. 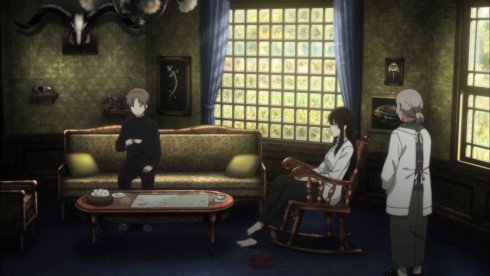 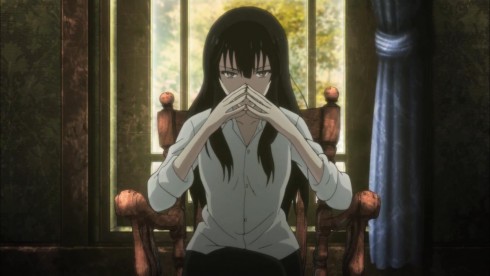 From our initial understanding, Sakurako-san is a story about a woman named Sakurako-san and her teenage assistant/partner, as they solve crimes together and eventually fall upon the dreaded serial killer Hanabusa. Its a pretty riveting story, one that laces its mysteries with a genuine sense of human affection and empathy. Sakurak0-san is a story that’s got a very human-centric, touchingly tragic story and extremely likable characters. That’s a recipe for success in any normal situation, except that well… The plot or mystery part of the show was never really going to get a proper and satisfying conclusion.

So what does the narrative do? What does the anime adaption staff do? They reframe the entire narrative and focus on something else entirely, and make the story about Sakurako and Shoutarou, the two leads, rather than the big clash with Hanabusa. 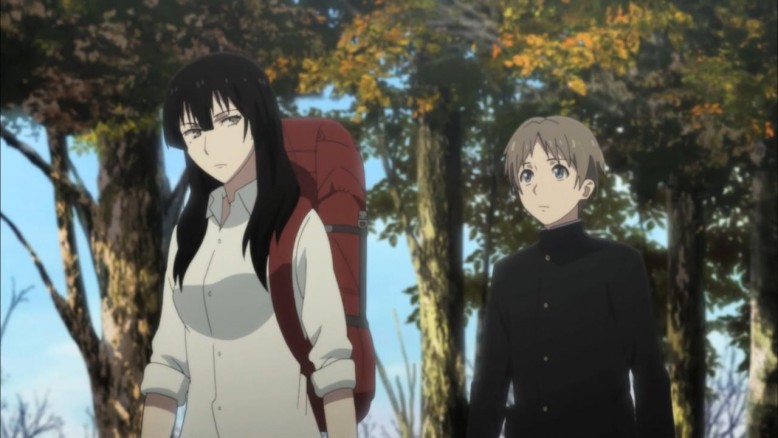 A tales of a Teenage boy and his older woman crush then?

Its a pretty clever idea, making the central conflict in the series about Sakurako and Shoutarou’s relationship, progressing it to a certain point, and then ending with the two of them clearly growing stronger as a duo, and closer as partners. And if you look back to how the series opened up, with a very huge emphasis on Shoutarou and Sakurako, then this ending and the approach, seems a lot more planned and prepared than it probably feels.

The shows opens with “another” mystery that Shotarou runs into while hanging out with Sakurako. Its kinda of fitting then, that the show actually closes with the two’s first meeting, and with the two of them finding each other again after a major setback. 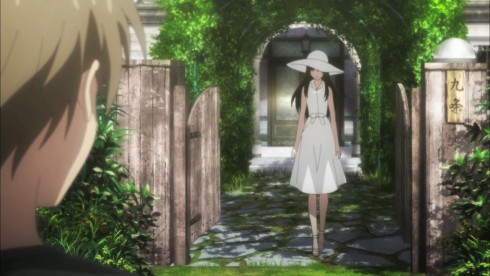 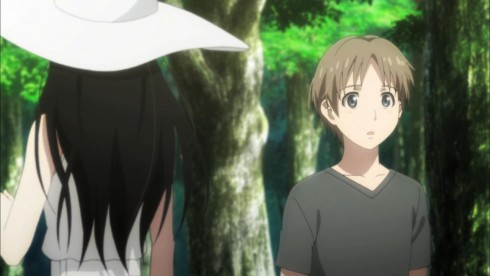 And I’ll say this, the idea of flashing back to Shoutarou and Sakurako’s first meeting actually works… Kind of. The problem is that even with this story, a story that I’m sure the audience has been dying to see, the execution and telling of that story actually feels kind of rushed. The whole “first meeting” story actually feels like it needs an episode or two, rather than a quick inter-cut of flashback scenes that more or less give us the general idea.

The first meeting between the duo that I’m sure fans of the show have become so enamored with, its an important event. Its an event that begs being told slowly, carefully and properly. I could’ve seen the show, in a perfect, taking its time and spending an episode or even two, slowly and steadily working through Sakurako and Shoutarou’s first meeting. There’s such a beautiful contrast between how the two interact when they first meet, and how comfortably couple-like the two are now. 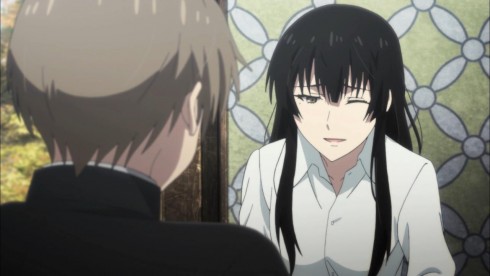 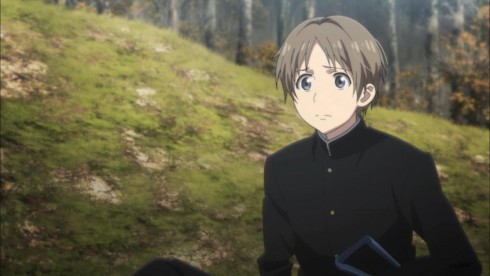 From a storytelling perspective, that’s always a fascinating idea. To go back to a time that feels so darn different from the present, and the big question of “how we got here” is slowly answered. Slowly answered being the key issue here, and the problem with this episode is that its anything but careful and slow.

Since this week’s episode has the monumental task of both showing us the backstory of our main duo and providing a conclusion to the series, it gets bogged down by that second responsibility. Shoutarou’s reflection on their first meeting feels like more of a highlight reel, and the eventual talk and reconciliation between him and Sakurako-san seems just as rushed, even if it does work pretty well on an emotional level. 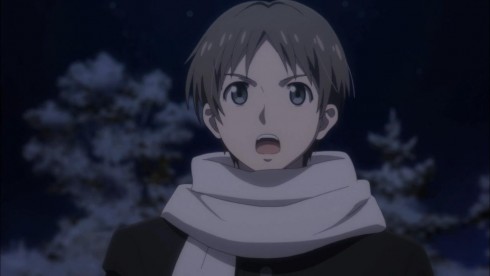 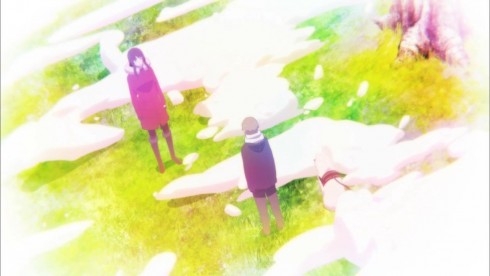 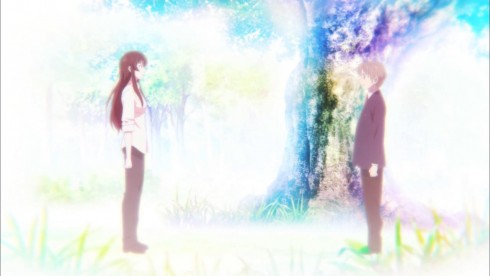 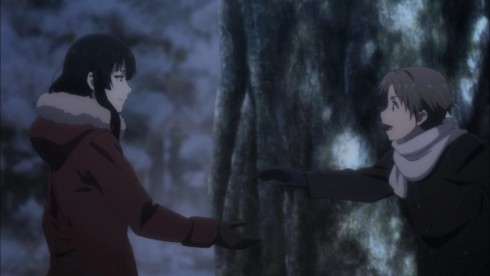 I won’t lie, I genuinely smiled as Shoutarou finally found the will to refuse to just “go away” after everything the two had been through. I loved it, when Shoutarou was finally able to reassure Sakurako and actually kind of prep her for the big battle with Hanabusa. The overwhelming faith and trust that Shoutarou has in Sakurako, and how he convinces her that the safest place for him is actually beside her, is all really well done.

And I’ll say that the reason it works is because, in the past, during their first meeting, it was Sakurako who actually reassured Shoutarou when he was floundering and lost. There’s a nice sense of payback, and it really does feel like the story comes full circle. Shoutarou is finally able to both carve out a place for himself besides Sakurako in the present, the future be damned. 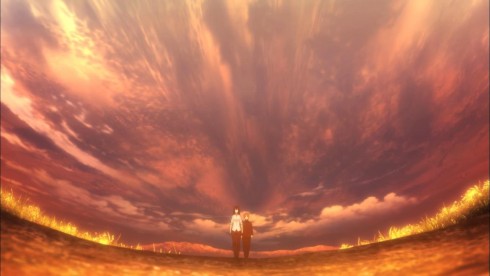 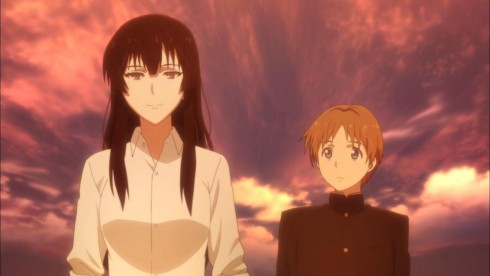 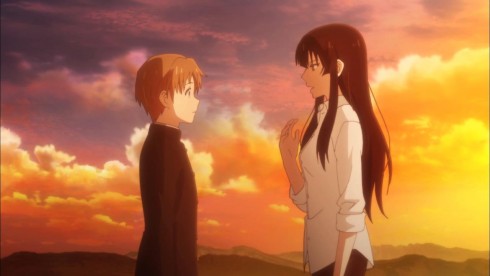 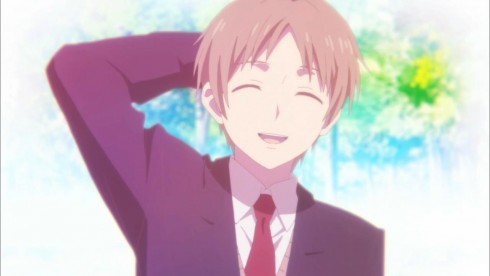 Its also nice that Shoutarou acknowledges that the way reality is, the two of them might have to say goodbye eventually, they might have to move on from one another. But… Just because that has to happen at some point, doesn’t mean they should waste and throwaway whatever time they DO have.

Its all great, powerful and generally hype worthy stuff. The final part, with Shoutarou pretty much cheering team Sakrauko against Hanabusa, is perhaps the most exciting moment of all. There’s that really strong sense of a “call to action”, and it seems like while things will get tough, Shoutarou and Sakurako are both determined to wade through the abyss that is Hanabusa, and make it back alive and intact. 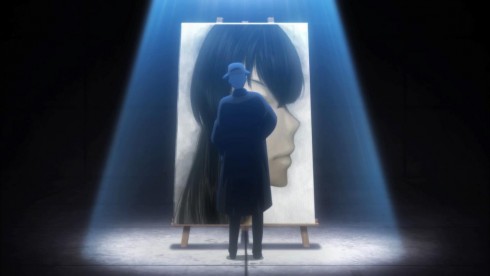 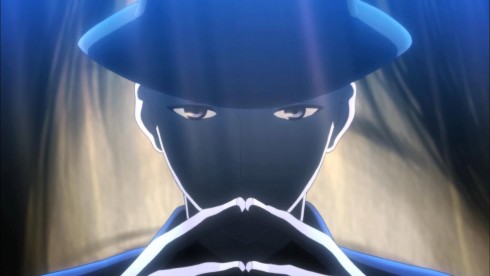 Yet… That’s also why this episode is so frustrating. The Hanabusa conflict is one that gets pushed, hyped and built up to even in the show’s final moments. Even though, the show has actually kind of tried to distance itself from Hanabusa, focusing more on stand alone stories, and interpersonal moments between its protagonist characters, it never can really escape the looming shadow of its villain.

Even with the little development and focus, Hanabusa is just so central to the core story that omitting him isn’t really possible. He’s there, waiting for our heroes to finally come and face off against him.  The fact that we never get to see that conflict, that extremely interesting clash of good vs evil through the show’s unique lens… Well it feels more than a little painful. 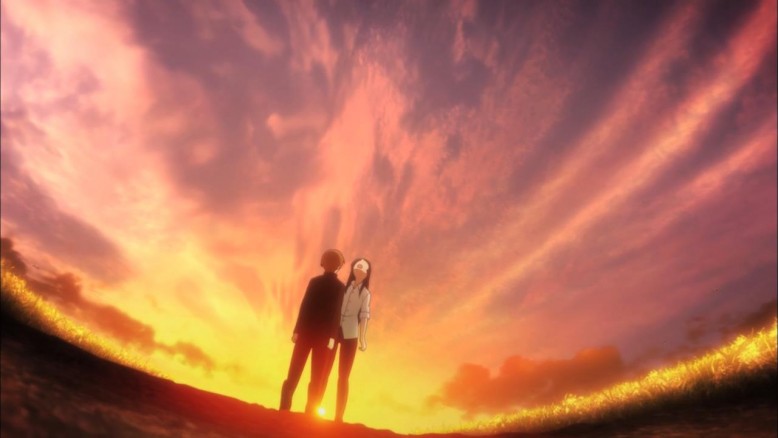 In the end, I think Sakurako-san is able to reach as much of a compromise as it can, given its circumstances. It can’t give us the proper and full story, but it’ll at least leave us with some insight into Shoutarou and Sakurako’s relationship, with does form the foundation of the show. And that really is as satisfying of a note to end on, as the show can manage.

Comparing the show to other shows like it, I’d say it does a better job of handling an “ending”, than its contemporaries. And honestly, if there were a possibility of a season 2 later down the line? This whole conversation would be markedly different. If this were the first of two cours, I’d be loving the moment that the first half ended on and clearly ready for the second. 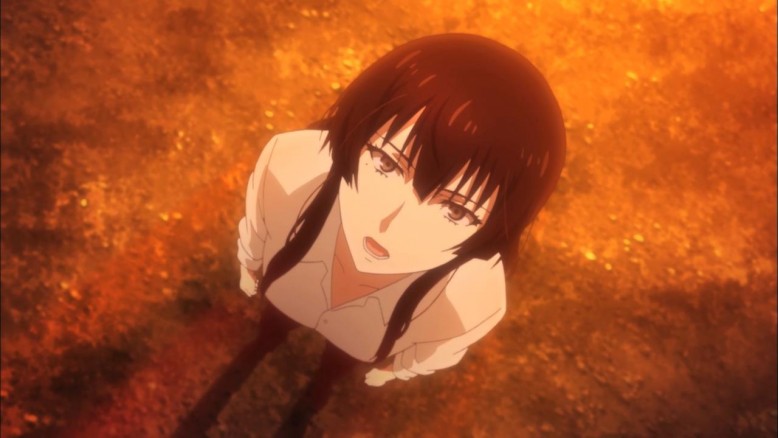 The big problem of course, is that its very unlikely for Sakurako-san to get a season 2. While I’m sure the Light Novel got a decent enough boost, I just don’t think this show is going to be enough of a commercial success to warrant a second season. Heck, it didn’t even find that much of an audience with the English speaking, subtitle loving anime audience, and its story and character centric approach, absence of fanservice or any merchandising potential, kinda leaves it in a bad place as far as continuations go.

Regardless of the fact that Sakurako-san was largely avoided by the English, subtitle watching anime fandom, and regardless of the fact that it probably won’t be remembered by a lot of people after this season is over, I really liked it. It was a personal favorite of mine, one that had a heartwarming, touching story with two leads that just kept on giving. That sense of giving, that sense of joy, was something that remained true, even as we got the bittersweet final episode. 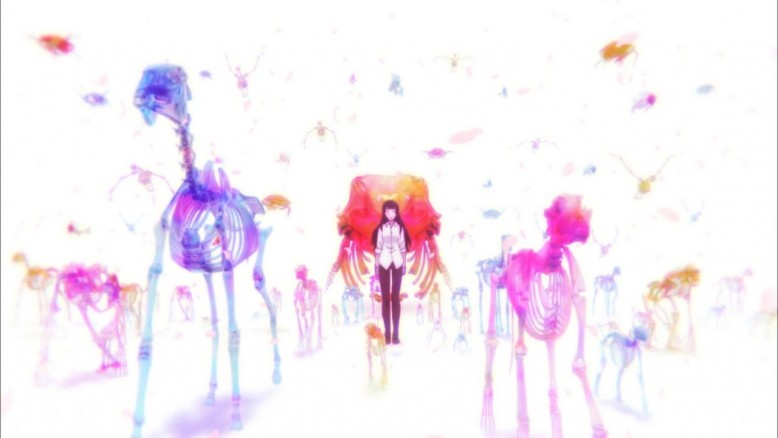 That’s a win in my book, and why I think I’d recommend Sakurako-san despite its ending. Its not a show for everyone, and it’ll only appeal to a certain type of person, but for someone like me, Sakurako-san was gold. It was gold, and I’d say it was one of the best series to come out the relatively weak fall 2015 anime season.