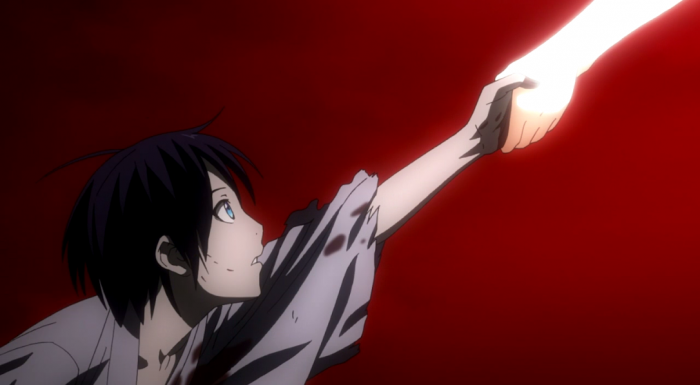 After last week’s bumpy ride, Noragami is back to doing what it does best: Character-driven storytelling, slick-looking battles, and moments of simple yet profound emotional resonance. And if there appears to be a little mist in my eyes, I assure you it’s just from the dust our battling gods kicked up this week. Definitely just that.

Topside, Ebisu tells Hiyori and Yukine about the “Soul Call,” where a mortal peers into the underworld and calls a person’s name, effectively dragging them back to the Near Shore. He’s not sure if it will work on a god, but he figures it’s the best chance they have—and Hiyori is the only one who can do it. So she stretches those vocal chords and gets to shouting, first for Yato and then for Bishamon.

Good thing, too, because Bishamon is fighting a losing battle despite her and her Regalia’s best efforts (my heart about jumped into my throat when Izanami snatched Kazuma), and Yato is in the middle of the world’s worst dinner party. 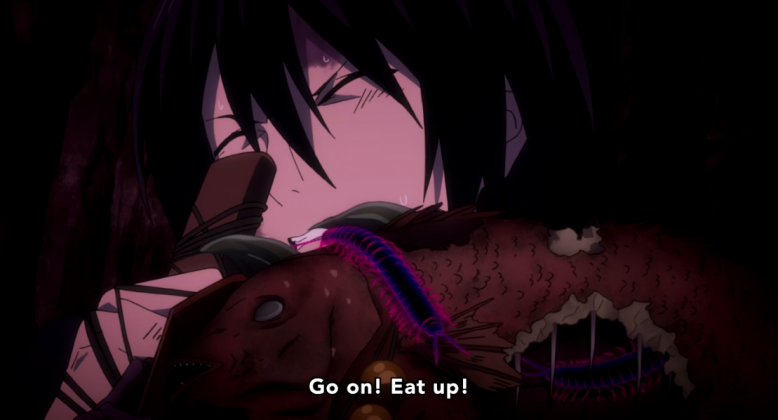 Hiyori’s Soul Call works like a (literal) charm for Bishamon, but Yato remains trapped in Izanami’s creepy hair prison, and the gang soon realizes why: “Yato” isn’t his actual name. This causes all manner of turmoil among the rescue party, particularly Yukine, who can’t believe Yato didn’t trust them enough to even tell them that. Secrets continue to be the greatest source of danger between our main trio, and it puts Yato (himself convinced the others would “hate him” if they knew his name) in a tight spot, all but hopeless for rescue at this point.

The situation isn’t any easier topside, as Heavens’ Punishers arrive in full force and (despite Bishamon’s insistence that they at least give him a fair trial) demand Ebisu be cleansed and held in the Shrine of Passing. Proving that his own descent to the underworld has left him as changed as Yato’s surely will, Ebisu refuses to die quietly, because he now has a desire this specific incarnation wishes to fulfill. Bishamon puts her faith in her fellow Lucky God, and it’s all lions and phantoms and whips (oh my!) from there. 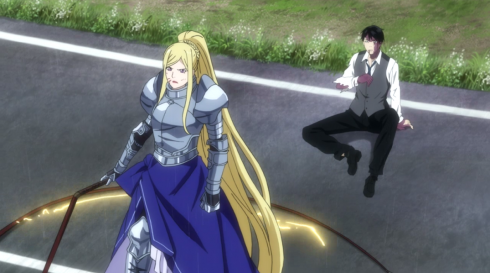 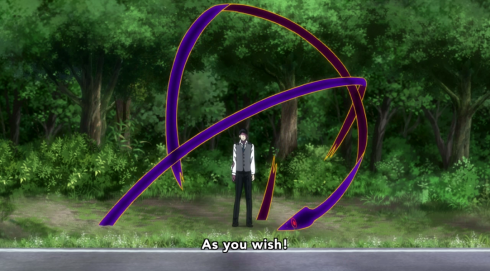 The Yato Rescue Squad finds themselves in the middle of a godly battle, but Hiyori won’t give up yet. She insists that Yato must be his real name because of how happy he was about the shrine she built for him…then, in a light bulb moment, realizes that the second character in Yato’s name (ト) isn’t pronounced like the kana “to” but the kanji “boku.” It’s a distinction most English-speaking viewers likely didn’t catch, but hopefully it didn’t lessen the emotional impact of the rest of the scene, because h’oh boy, is it a heart-warmer.

I confess that I was sort of hoping “Yato” would work because it would have been a nice way to demonstrate the thing Yato’s been trying to do for so long: change and become someone other than the infamous calamity god. But perhaps Yato isn’t quite ready to take that final step yet. So, instead, this showcases not only Hiyori’s quick thinking, but also her ability to see to the “truth” of her friend (names being so closely tied to one’s very essence in the Noraverse, after all) and to call the name he thought was hidden from them.

And then, in a gracefully staged, wordless moment of connection, the lonely, despairing child Yaboku takes the hand that reaches for him and at last returns to the surface. 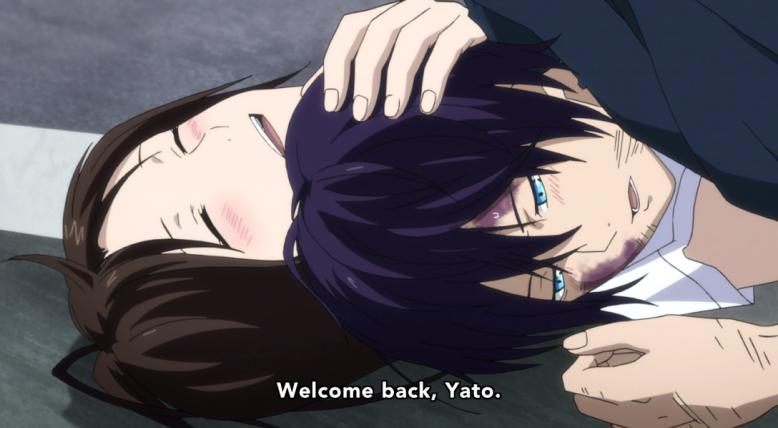 My eyes. The dust. It’s everywhere.

Nothing that follows will quite top this understated but profoundly moving reunion (Noragami does “understated but profoundly moving” exceedingly well, by the way, and it’s one of my favorite narrative styles). Still, the rest of the episode is full of explosions and chase scenes and Kazuma being a total freaking rock star (he subjugates A THUNDER DRAGON, for Pete’s sake), so it’s well worth the price of admission even so.

In fact, the fight seems to be going Bishamon’s way, and it looks like Ebisu & Co. may actually have time to escape… until the Heavenly Army busts out the spaceship from Independence Day, anyway. 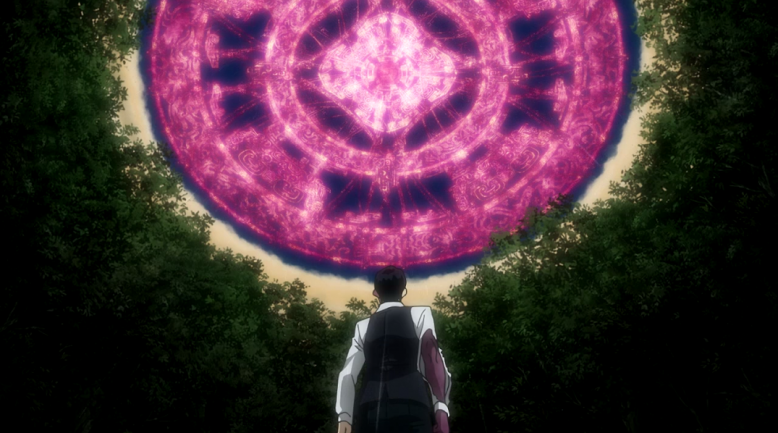 Okay, actually it’s a “Pacification Ring,” but the look and function is basically the same—and in this analogy, Ebisu is the White House. Gulp. Bishamon can’t believe the Heavens are going to such great lengths, even willing to cause mass destruction to the mortal world, and I, too, suspect there’s a lot more going on behind the scenes than we’ve seen thus far. Ebisu seems ready to give up rather than risk the lives of the people around him, but Yato has other, much crazier plans.

My favorite part about what happens next (other than the sheer, reckless absurdity of Yato and Yukine slicing a Heavenly spell circle into quarters) is the Punishers chanting “Should thou be pure of heart, Ebisu, the arrow shall miss,” because it’s such obvious BS: The first shot already missed, but they’re taking another one even so. There’s a hefty amount of hypocrisy at work here, and it’s a little disheartening to know we’ve only got one episode left and won’t be able to properly explore everything that’s happening here—at least in this season, anyway. My fingers remain eternally crossed for another one, BONES. 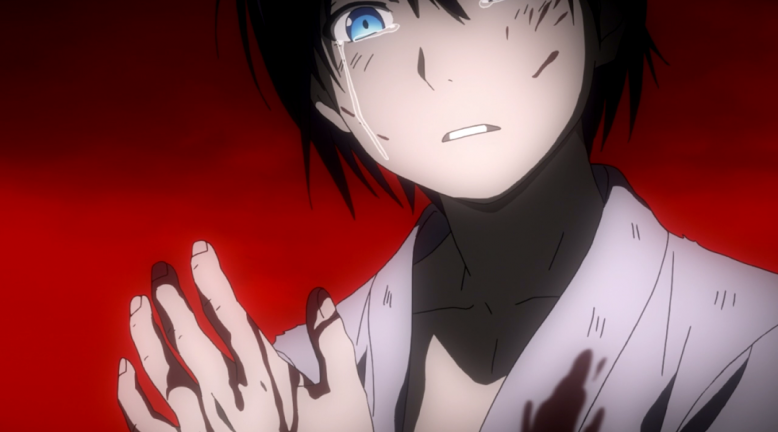 Yes, Yato. This is exactly how I feel when I think about Noragami ending next week, too.

At any rate, Yato proves his trust in Yukine and Yukine proves he’s up to the task of protecting Yato, as the two use far more power than a minor god should possess (hmmm…) to take out the Pacification Ring. Things are looking up, if not a little windswept, but the Punishers are a persistent bunch, and another, ground-based containment circle may just capture Ebisu after all. The Heavens, man. Such buzzkills.

But hey, at least Kazuma got to be a total freaking rock star for a while there. 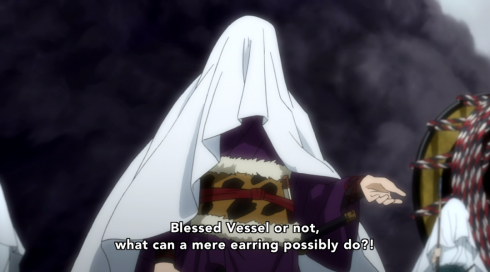 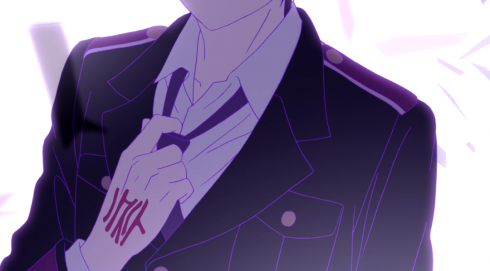