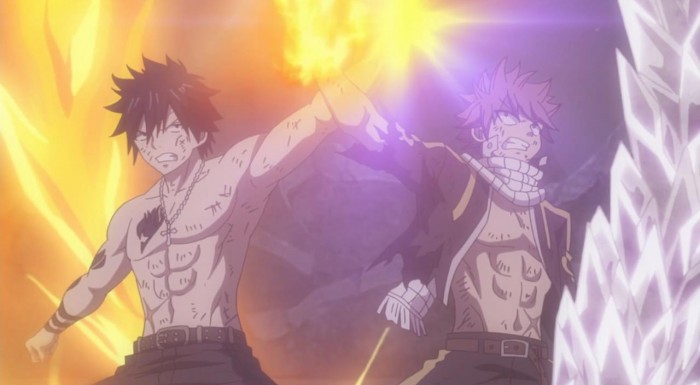 Its getting really difficult to talk about Fairy Tail, to enjoy it even, with the constant pacing and adaption issues we seem to get on a near weekly basis. It also doesn’t feel really great to constantly harp on the same issues, time and time again. Its gotten to the point where I’m starting to see my own interest in Fairy Tail wane as each week’s episode comes in, throws in an unnecessary amount of filler, and then leaves me cold for what should be the awesome moment of the episode. 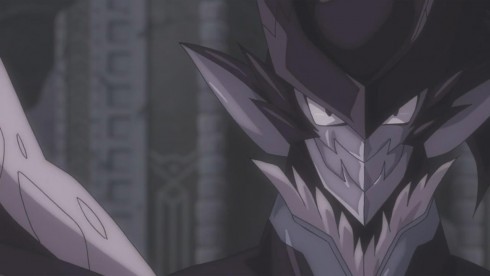 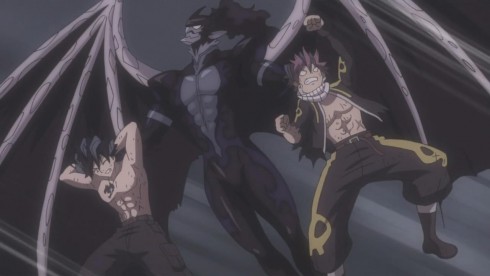 Fairy Tail’s adopted a new pattern in the recent episodes, and its a really troubling one. Each week, the episode will start off really strong, but will quickly take a sharp turn for the worst for what can be term as the majority of the episode. Unimportant conversations, stupid flashbacks and recycled moments, and just general delaying tactics will KILL any momentum or thrill that the episode has. But then, the episode will END on a really interesting note, a great cliffhanger, in an effort to keep the audience around.

Its a disgusting tactic, if only because it doesn’t work as well as I think A-1 Pictures and the production staff would hope. Lets take the Mard Geer vs Natsu and Gray battle as an example. That’s what this week’s episode openned with, and WOW, was it interesting. The problem though, was that we quickly shifted away from that, and towards a slew of other things that, at the moment, I could care less for. 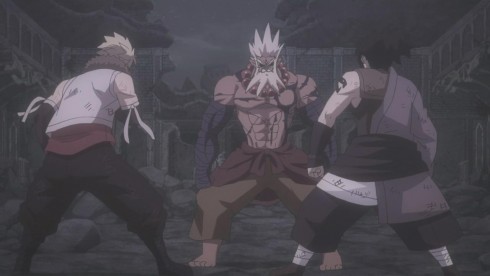 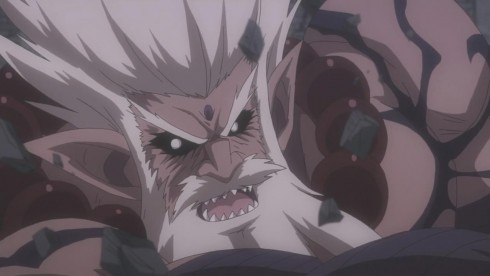 The Sting and Rogue vs Jiemma battle was one such thing that just kinda took over a quarter of the episode, but felt pretty blah at best. I’m hoping that the Jiemma stuff is filler, because the dialogue, and the fight itself was pretty darn pathetic, and not all on the level of what we generally get from Mashima-sensei. Jiemma bellowed and screamed like a cartoon villain, and seemed to resemble a Super Sentai or Power Rangers villain more so than an actual antagonist.

He kept sprouting stuff about weakness and what not, but then was taken out in one combined attack by both Sting and Rogue. Why didn’t Sting and Rogue just do that from the get go? It felt odd because the fight felt really rushed, even for Fairy Tail. The big discussion about what it means to be a guild, how messed up Jiemma was, all of that felt like it was glossed over. In the end Jiemma didn’t even feel very powerful, and it felt like Sting and Rogue were either too powerful at the end, or not powerful enough. The whole thing felt odd, ambigious, and to be quite honest, pointless. 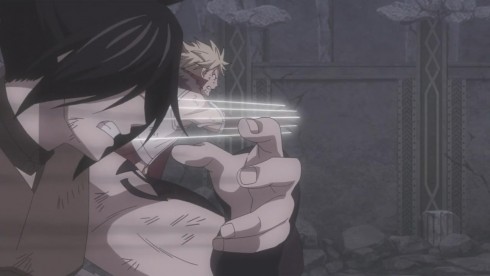 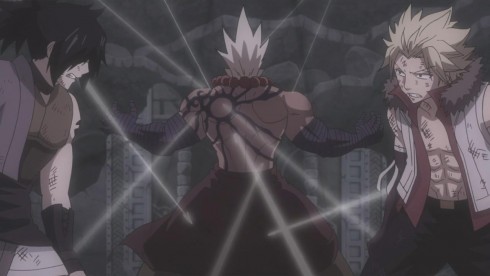 In the Jiemma got taken down, as did Sabertooth’s twin Dragons. I still can’t help think that if this particular story hadn’t happened, we would’ve been FINE. I’d have much rather seen Natsu and Gray take Mard Geer for most of the episode, anyway.

But we didn’t get to Natsu and Gray until well into the second half. Most of the episode was actually occupied by other filler moments, and scenes that I honestly think could’ve been trimmed and slashed. Lucy and co finally decided to leave, Erza’s fight reached the point where she finally stood up again, and Gajeel and Levy got to Polishucha. These scenes felt a tad bit too long, and the recap of Laxus’s battle was completely and utterly unnecessary. 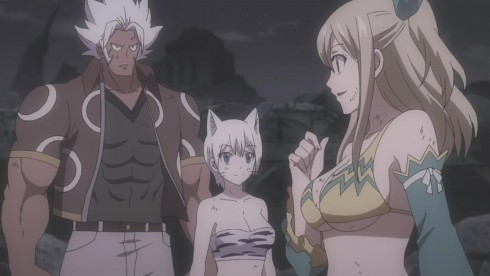 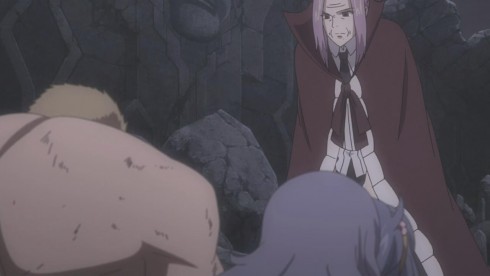 I won’t speculate as to WHY this is being done, I’m done with that. What I do know is that this padding, hurts the story, hurts it considerably. Because even when we did finally get back to Natsu and Gray, the whole thing didn’t quite generate as much excitement as it had in the start.

To make matters worse, the ending and conclusion to that battle left a lot to be desired. Natsu and Gray were basically dispatched by Mard Geer’s ultimate curse magic, Memento Mori. Now… The reason this whole thing didn’t feel all that epic is because we KNOW that Natsu and Gray can’t be taken out. There simply wouldn’t be a story without those two, so its clear as day that either Memento Mori isn’t quite what Mard Geer thinks it is, or that we’ll get it reta-conned at some point soon. 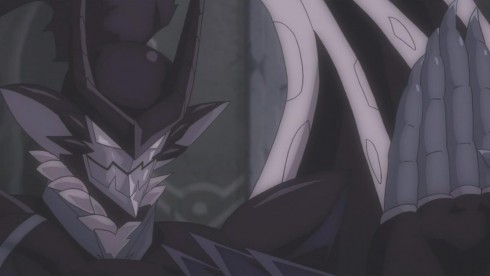 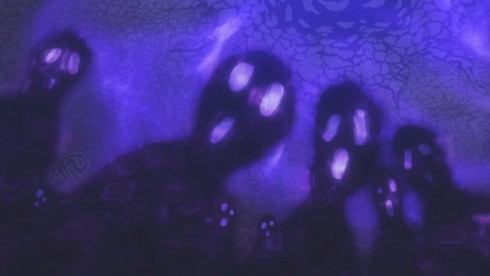 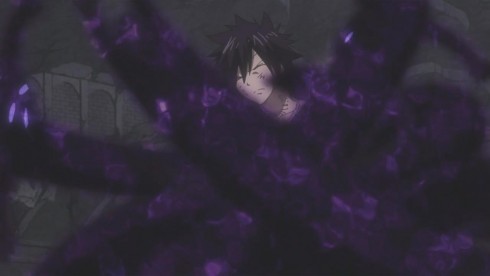 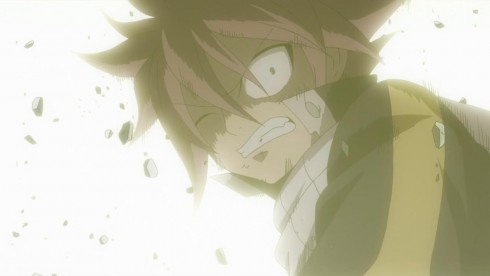 The idea of curse power, being powered by the evil inside humaity was nice, even if it wasn’t all that original. It really does set Tartaro’s powers as truly antagonist, as opposed to the neutral nature of magic. I also liked the concept of Memento Mori, a curse that actually removes the very concept of life and death, and basically just erases your existence. I’m still not convinced that that is quite what it does, and that it might be some kind of time travel power or something similar.

Either that, or Lumen Histiore is going to come in and basically rewrite everything. I really hope its nothing as stupid as that, because Fairy Tail and Mashima-sensei have already used the turning back time thing, albeit beautifully with Ultear. 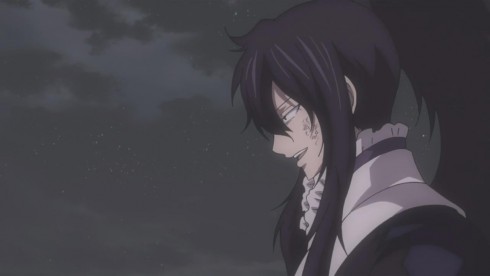 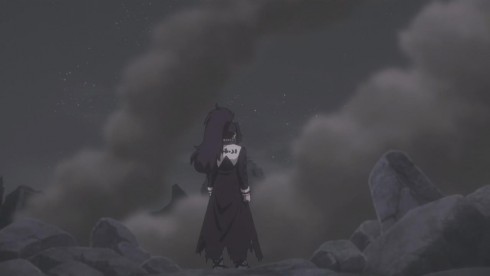 In the end, I’d say Fairy Tail’s interesting, but I think the story is really starting to feel thin. I really do think that if Fairy Tail wants to continue to hook in filler, and pad things out, then it has to do better than this. We’ve got three more episodes for this arc, and I’m almost kind of wondering how everything is going to resolve and wrap up. But more importantly, I feel myself feeling indifferent to it all.

I’m not excited for next week, I’m indifferent. I’ll see it when it comes out, but that last impression, that hunger that Fairy Tail tends to generate in me, that’s not happening. That’s a sad place to be in, for sure. 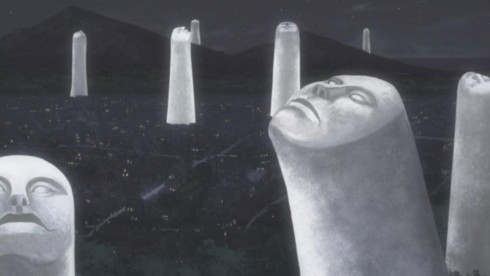 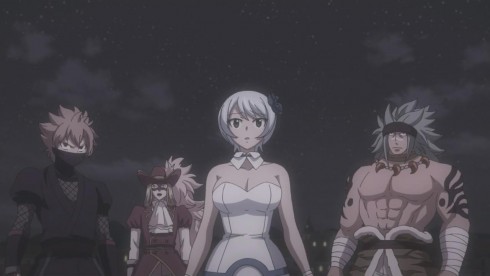 Face, the other guilds, and Mard Geer. More Next week.