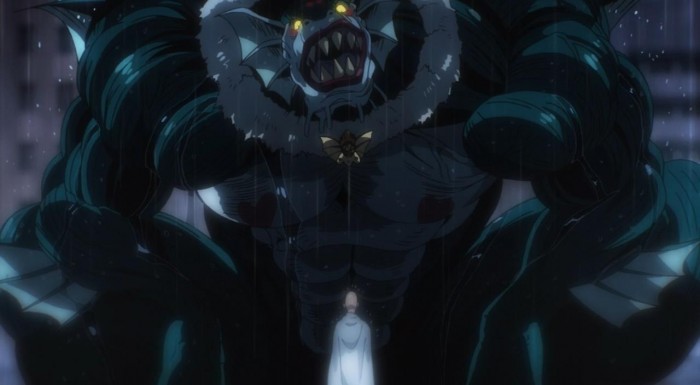 At the end of it all, One-Punch Man is a show that always stays true to itself. If you came into this episode expecting a long epic battle between Saitama and The Deep Sea King, well… You’ll be disappointed. That disappointment, however, will only last a few seconds at most, before the show dives into the kind of territory that makes it such an interesting watch. One-Punch Man may have the flash and animation to put even some of the best Anime movies to shame, but it’s a satire and exploration of Super Hero tropes first, and a jaw-dropping popcorn action flick second.

That’s not say that there wasn’t any action this week. No, as per usual, we got our weekly dose of stellar action and fight scenes, this time thanks to Genos. Genos’s battle with the Deep Sea King was “epic”. I admit to using that word more often than I probably should with regards to this show, but there really is no better word to describe how amazing the fight scenes in this show are. Genos’s battle with the Sea King was brutal, fluid, and with tons of earth shattering hits. 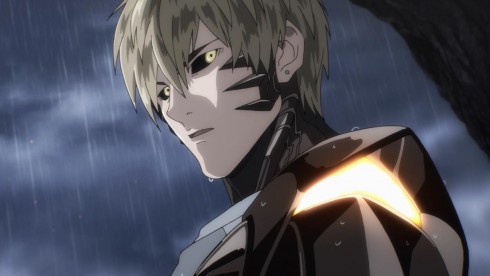 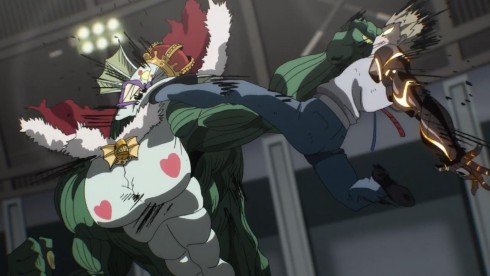 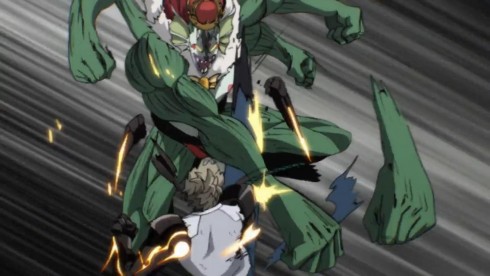 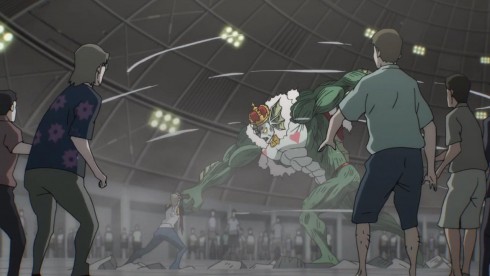 Its kind of funny in a way, how Genos is probably the only S-Class Hero that could come after Saitama if were ranking based on power. Saitama may be leagues and worlds ahead of him, but Genos none the less has the heart, the diligence and the power to firmly take that second spot.  It was awesome seeing Genos damage and mess up the Sea King, but my favorite moment has to be when Genos rushed in and sacrificed himself to save the little girl.

That was as much of a hero moment as any other, and I think this episode in particular zero-ed in on an interesting message. Is there a point to a hero’s actions if he or she can’t take down the bad guy? That’s something that the show started with Genos, and then moved on to outright focusing on with Mumen Rider. 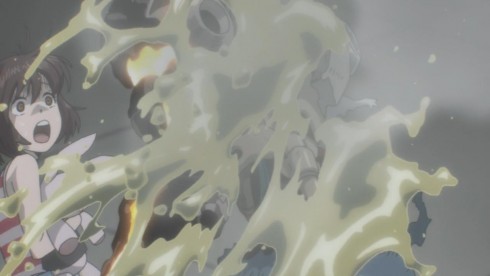 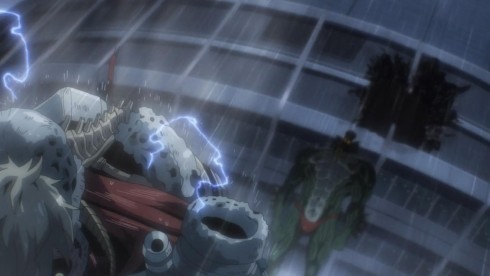 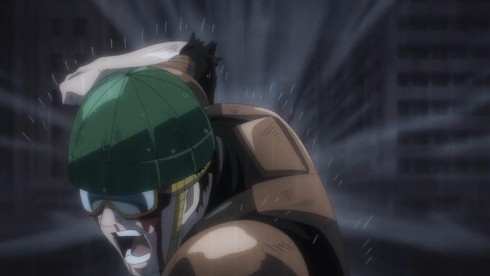 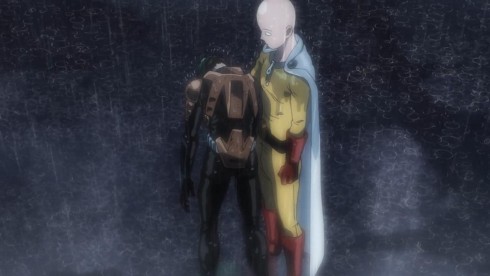 Mumen Rider, a C-Class hero we had only caught glimpses of so far, but seeing him in the forefront, I have to say I quite like the character. Mumen Rider may not have much power, but he’s got the heart and the will of a hero. Maybe not a super hero in the traditional sense, but a bonafide hero that dies trying to protect someone. And while Mumen Rider is able to get the peanut gallery of civilians on his side, rooting for him, he does in the end, get smashed into the ground.

I liked that entire concept. Mumen Rider’s appeal isn’t that he succeeds, its that he tries his best and refuses to run away when things get tough. To have him suddenly power up, and take out the enemy there, or even damage him, would be contrary to that idea. 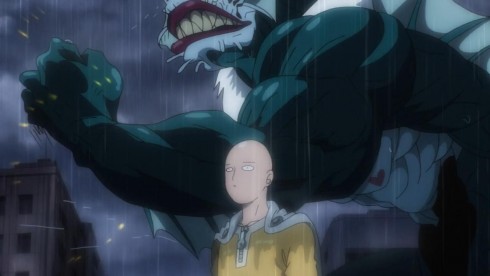 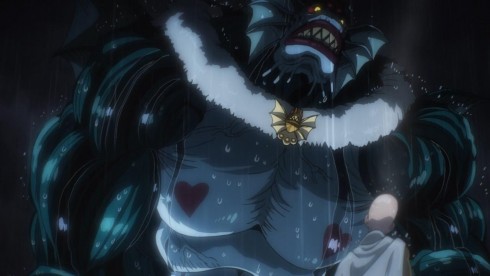 And of course, Saitama wouldn’t really have had anything to do had the Sea King been defeated before hand. Speaking of which, Saitama. Raise your hand if you had gotten your hopes up for an actual drawn out battle between Saitama and the Sea King. I know I had, I know Saitama had. But coming back to what I said at the start of this post, One-Punch Man is a show that remains true to itself, always.

It may be a bummer, it might be boring, But Saitama really did One-Punch the Sea King into oblivion. He’s just that strong, that powerful. Saitama isn’t “cool” like Genos or some of the other heroes, or rather, he isn’t cool to watch in action. He comes in, finishes off the monster, and its all over. What IS interesting, however, is how the people around him react to this. 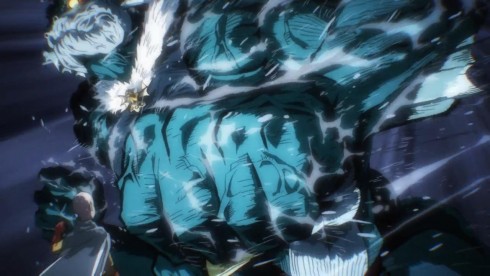 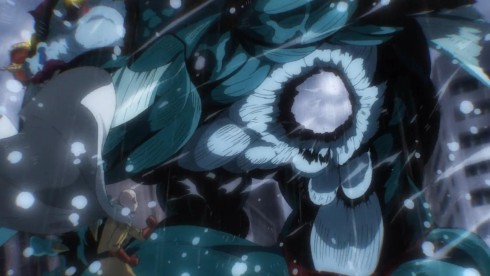 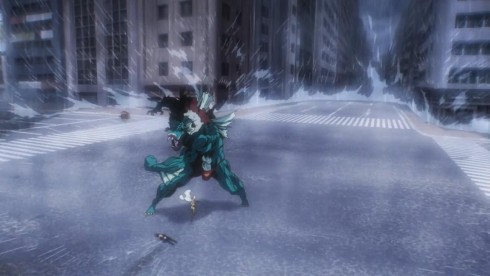 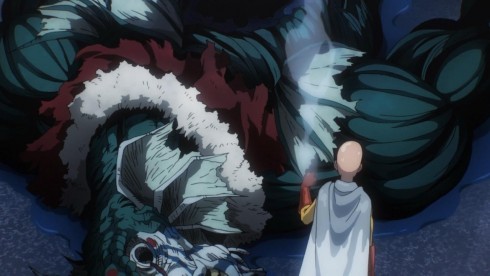 As has been the case a few times now, this godly power of Saitama’s is looked at with suspicion and anger, rather than revere and admiration. Saitama is so far removed from a normal person now, that most people can’t even understand that someone like him existing is even possible. Its a pretty common human failing, rationalize away that which you don’t understand. The civilians that Saitama saves, do just that.

Its worth mentioning that there’s only one guy that starts the rumor mongering, “Its a conspiracy” train, but one guy is all you need. In the end, I suppose One-Punch Man is making the argument that its not enough for people to just get saved, in a real situation, there’d be all kinds of people, and some of those people would need a focal point to vent their frustration on. 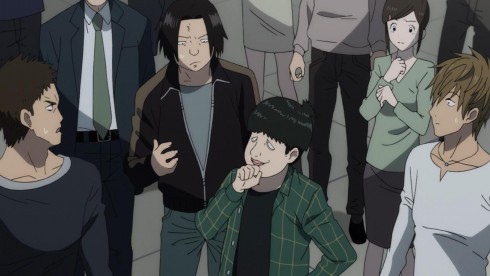 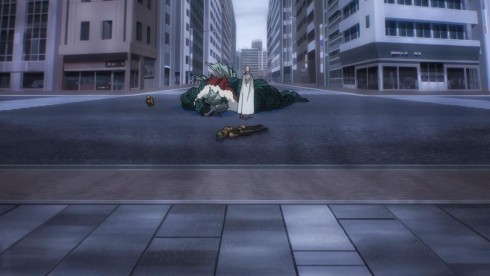 And so it happens, thanks to that one sleazy guy, everyone starts wondering if the heroes really are all just weak and useless, or if its all some kind of act. Saitama’s grand, saving punch ends up putting every hero’s reputation on the line. So what does the guy do? He does the noble thing, and plays the villain.

The scene where Saitama ends up acting like a jerk, in order to preserve the other heroes dignity, is heart breaking. Its painful to watch, and yet… Its the most heroic and awesome thing that Saitama does in the whole episode. I think that act, the act of preserving everybody’s sanity, of taking everybody’s hate and directing it at yourself, that’s what makes Saitama such an awesome hero, and a dude who’s worthy of that title. 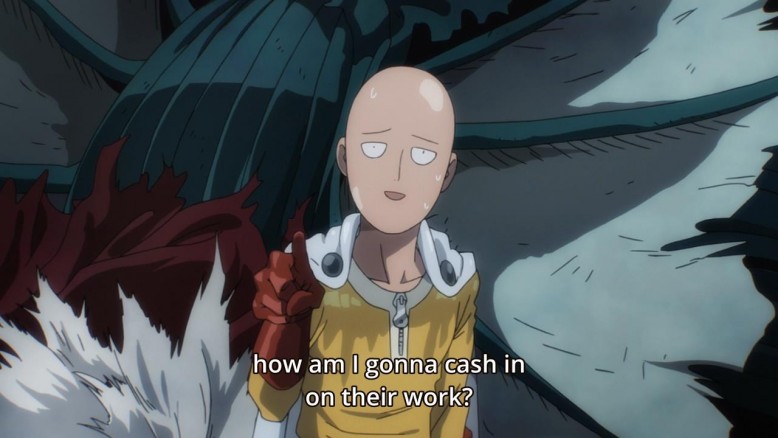 Saitama – The True Bro for the entire Hero Association.

At the end of the day, Saitama is just a nice guy, and it unfortunately seems like Nice guys finish last in the world of One-Punch Man. I think this calls back to One-Punch Man’s more general critique of modern society, and Japanese society in general. I think its that dose of reality, that dose of cynicism, that gives One-Punch Man that realistic edge that even some of the best modern super hero stories lack. Its that same edge that makes stories like The Dark Knight so powerful, because they take into account the good and ill of humanity.

Its not all bad though, as Saitama does end up moving up to Rank B afterwards. Its worth noting that while I’m okay with kind of understanding the normal civilian misunderstanding Saitama’s powers, its just pure incompetence when the Hero Association does it. Its that edge of reality coming in again, but an organization as big as the Hero Association has more rotten apples than it does good ones. The people who come up with the ranking and interview are clearly not adept at their jobs, while people like Amai Mask continue to complain about being interrupted from their filming. 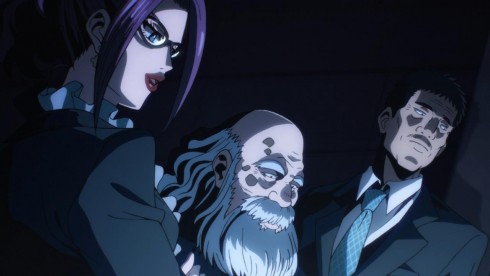 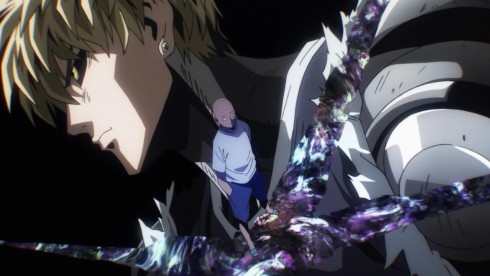 But, for every rotten, disgusting person inside the Hero Association, there are people like Genos and Mumen Rider. I also have to say that I love that one of Saitama’s reasons for advancing is to make sure he can eventually catch up to Genos. It makes sense, because if Saitama’s in the S-Rank, he can more properly try and help out when those particular heroes are in over their head.

And lets not forget about Mumen Rider. While Saitama might have alienated the public, to the point of getting hate mail, he does get one more new friend out of this whole ordeal. If there’s a list of “favorite moments” from this series, then Mumen Rider and Saitama sitting down at an Oden stand and grabbing a bite is definitely on there. Such a nice and heartwarming moment to end an episode on! 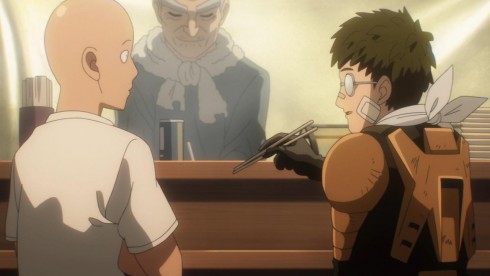 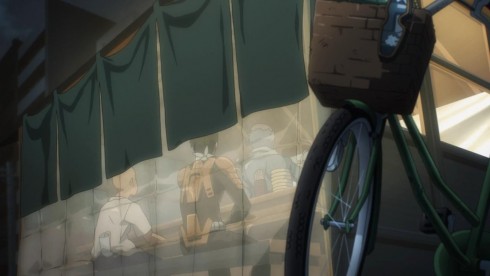 So… Having said all of that, how was One-Punch Man’s first multi-episode story? I’d say it was a smashing success. One-Punch Man clearly leveled up with this story, and we got some serious build up, epic fights, cool moments, and all the while the show continued to stay true to itself and its core premise. If anything, this episode makes me sad to think that we’ve only got another 2 episodes left for this season.

Given the success that One-Punch Man is enjoying in Japan, and the success it should enjoy in the west when it comes stateside (beyond just somewhere like Hulu), I’m confident to say that we’ll see more of One-Punch Man. For now… Lets just savor the last two weeks of what has definitely been one of the best series of the year.