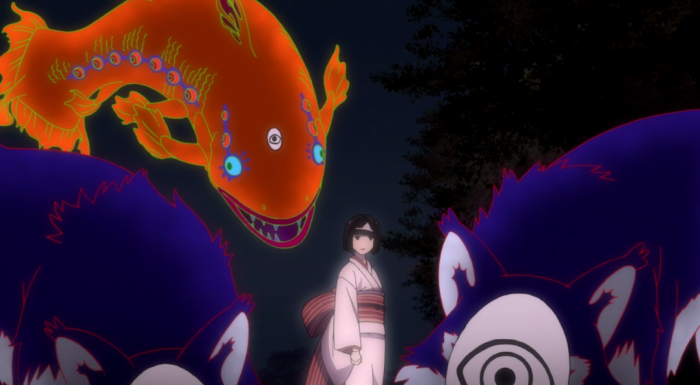 Our idyllic interlude is predictably short-lived, as Noragami chucks us in to its next major conflict(s) and promises (or at least heavily teases) some major movement in terms of revealing more of Yato’s backstory and his long, messy relationship with Nora. This is largely a table-setting episode, introducing new antagonists and complications and prepping us for the potential calamities to come. And rest assured, it’s looking to be one packed table indeed.

But before we get to all that, we need to handle the aftermath from last week’s finale. Hiyori’s friendly gesture has become a major game-changer: Because Yato has a shrine and therefore devoted followers, it means he can (after a whole lotta pestering) finally be recognized as a proper, registered god. He has access to Tamagahara, can partake in Colloquies, can (legally) sell his own merchandise, and even gets his own (hilariously small) plot of land.

Yato responds to all this by becoming Hiyori’s biggest fanboy, introducing himself to his new heavenly neighbors, throwing off a bunch of anime sparkles, and basically being what we in the Serious Blogging World like to call “totes adorbs.” Some less professional folks might even fill the first 15-odd minutes of this episode with giddy giggling and spontaneous cries of “Kyuuuute!”

Not me, though. No no, certainly not. 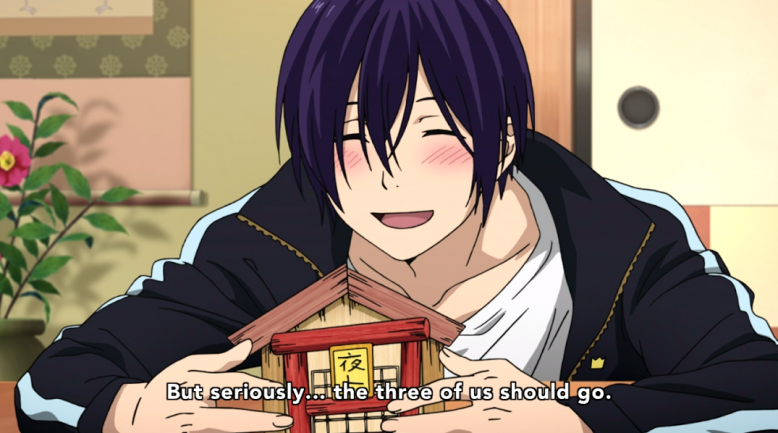 Hiyori doesn’t really understand the significance of her gesture, so Kofuku fills her in on a few more of the godly rules. It’s mostly things we at home already knew or had surmised, but it’s good to get confirmation that a gods’ existence is tied entirely to human memory. If no one remembers you, then no one prays to you, and then there’s no reason for you to exist.

Two important points come out of this, both of which will likely affect future episodes. First, Hiyori now fully understands just how important she is to Yato, not just as a friend, but as a “follower” who grants him strength and stability. These two mean the world to each other, and while I’m hesitant to call it a romance just yet, I have no qualms referring to it as love, especially after this week’s developments. 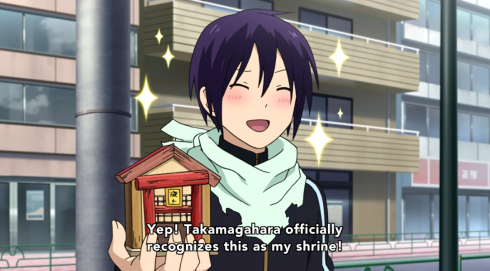 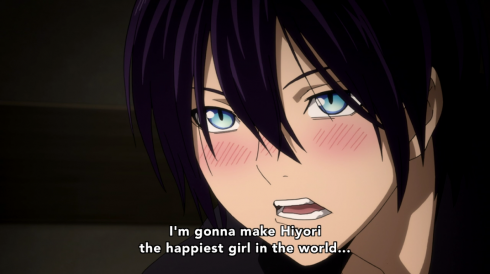 The second point to come out of all this is that Yato has somehow managed to survive for a long time with neither a shrine nor a visible following, suggesting that someone has been worshiping him consistently over the centuries. Dollars to doughnuts his continued existence is connected to the cloaked figure who told Yato he didn’t need a shrine, and dollars to even more doughnuts that cloaked figure is the same “father” Nora serves.

Oh, and speaking of Nora—she’s baaaaack, and more obsessive than ever! When Yato goes out to meet her in an attempt to officially cut ties with her, she flies into a quiet, terrifying rage, accusing him of making her a Nora in the first place and siccing her masked Phantom army on him. Without Yukine, Yato is quickly overwhelmed, but she’s not interested in killing him just yet. No, she and “father” have other plans for him. 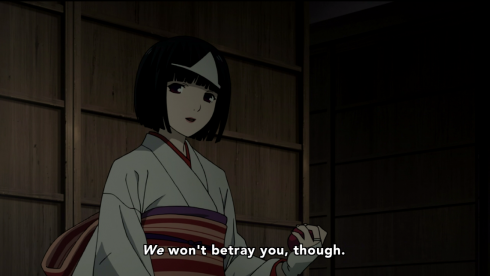 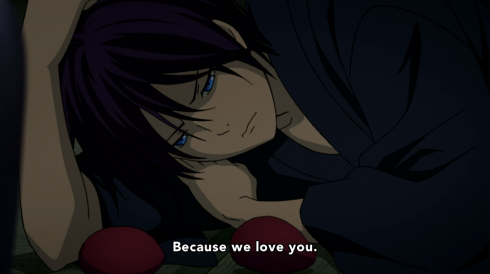 Nora (or “Hiiro,” I s’pose) spends most of a month gaslighting Yato, reminding him of the calamity god he used to be, assuring him more people appreciate his violent “miracles” than his benign ones, and (most heinously) insisting that Hiyori and Yukine will ultimately reject him just like everyone else—except her, of course, because she’s the only one who loves him for who he really is. It’s damned unpleasant, and while I wouldn’t be at all surprised if Nora/Hiiro ends up being a sympathetic figure, at this point I mostly just want to strangle her with her own headband.

While her emotional manipulations do give Yato pause, they don’t manage to entirely “turn” him. It’s not totally clear why Yato obeys her as long as he does, though I’m assuming it’s a self-preservation tactic since he doesn’t have a way to defend himself against Nora’s Phantom horde; still, once he realizes how long it’s been and remembers Hiyori (and worries that she might not remember him) he goes ballistic, desperate to return to her. It’s frightening to see him lose control, and a reminder of how violent the Yato god can be when he’s focused on destroying instead of protecting.

Fortunately(?), “Father” steps in to settle things down, offering to set Yato free just as soon as he helps them retrieve a certain conjurer from the underworld. But it’s fine, you guys. I’m sure Father has only the the purest, most noble of intentions here. 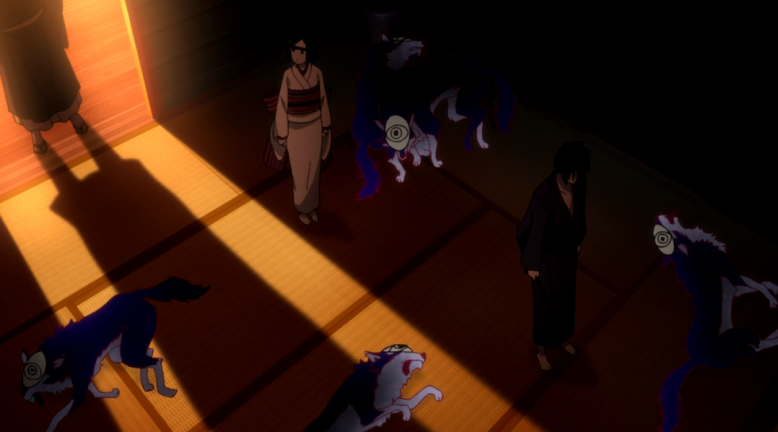 This is totally the kind of lighting and camera angle you’d use for a good guy, right?

In other Team Yato news, Yukine is learning invocations from Kazuma (the secret ingredient is contempt!), which would be grand if he weren’t so focused on “becoming stronger” that he’s ignoring everything else, including the god he swore to protect. And in the mundane world, our old friend Manabu is carrying a serious torch for Hiyori thanks to some fancy-pants memory rewrites, and Hiyori’s friend has a crush on an upperclassmen who’s likely that same mystery student Hiyori literally stumbles into. And no, I do not trust him, not one tiny bit.

And in still other news (busy week!), Bishamon and Okuninushi visit a sick colleague at the godly hospital (godspital?). It’s Ebisu, who’s landed himself in there “again” thanks to a bad case of the blight. This is, we learn, because of all the Phantom-wrangling he’s been doing as of late, though his fellow Lucky Gods haven’t caught wise to this yet. Okuninushi immediately blames Ebisu’s Regalia, but Bishamon doesn’t seem as convinced. Fingers crossed she’s putting some pieces together here. 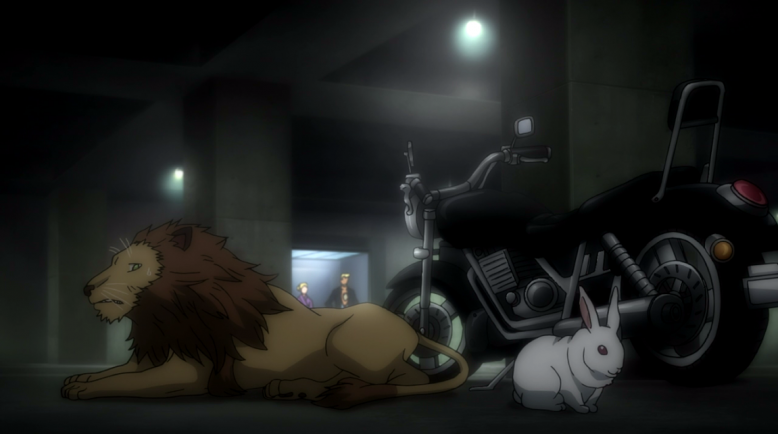 This is one of those shots that could only exist in anime, and for that I am so very grateful.

While Ebisu’s endgame remains shrouded in mystery, the individual moves are at least starting to clear up, as it’s pretty obvious he’s working with our silent Father to harness these Phantoms for a purpose. He’s also in need of a “Locution Brush,” which I suspect would keep the blight at bay and prevent him from constantly having to reincarnate. “Locution” can refer to both figures of speech (i.e., words or phrases used for purposes other than literal ones, such as metaphors or metonyms) as well as the phenomenon where a religious/godly figure speaks to a human, and given the importance of names in the Noraverse, that double-meaning may be intentional.

If I were a bettin’ gal, I’d stake a lot of money on that “conjurer” in the afterlife being related to this Locution Brush, and on Bishamon and Yato’s stories colliding hard before much longer. These gods (and Adachitoka) weave a tangled web indeed.