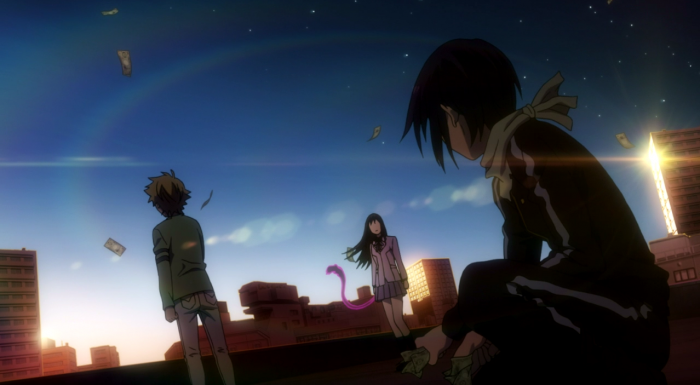 It’s a quiet week by recent Noragami standards, one-part Bishamon epilogue and one-part (I assume) Ebisu prologue, with a little Delivery God mission tucked up in the center. The series gets to stretch its comedy muscles and remind us that it’s just as good at humor as it is at action and drama, but if you thought that meant they were going to let our feelings breathe after the emotional rollercoaster of the past few weeks, boy howdy, do you have another thing comin’.

On the plot and world-building front, we see that, while gods may not be able to “do wrong” by human standards, they still have their own Far Shore protocols to abide by, as Bishamon has to go up in front of a vague yet menacing godly council to answer for the tumult she and her Regalia have caused. While they’re not pleased about the battle and the blight, they’re mostly upset about her allowing Kugaha to go free, as he was working with whoever’s been using the “Masked Ones”—Phantoms employed using scourges—and the gods are eager to track this rogue down.

In Bishamon’s defense, she didn’t know at the time that Kugaha was a Nora (likely Kazuma told her after the fact), but her actions have still put her On Notice. She and Kazuma are hard at work trying to track down but Kugaha and his other master, a god whose use of Phantoms should make them so badly corrupted that they shouldn’t even exist. And yet, here we are. 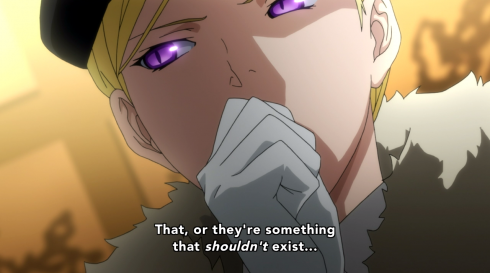 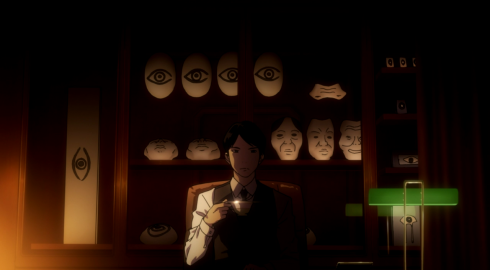 All of which will no doubt be important in the coming weeks, but for now we’re going to focus on a more intimate story: The increasingly strong bond between Hiyori, Yato, and Yukine. The opening of this episode is admittedly jarring, as Yato acts as if he’s going to keep his promise to Tenjin about “severing ties” (i.e., destroying the memories) between himself and Hiyori, she passionately refuses, and… we cut forward to her entering high school, her relationship with both Yato and Yukine as intact as ever. It’s surprising that Tenjin would let this go as easily as he does, and a small narrative hiccup in a season that so far has been very tightly written. But given all the wonderful that follows, I’m inclined to give them a pass this time.

At any rate, the trio are still together and everyone’s impressed with Yukine’s transformation into a Blessed Vessel, so much so that Ebisu (the real one) shows up with a briefcase full of money and offers to buy (or even rent) him from Yato. Both Yato and Yukine get yen signs in their eyes at the thought, Yato spends much of the episode wrapped in a comforting blanket of bills, and we get one of the best gifs of the season:

It’s funny stuff, but it serves a purpose, too, as it causes both Yato and Yukine’s insecurities to come bubbling to the surface again. Yato has abandonment issues since his past Regalia left him due to his nameless status and lack of a proper shrine, and Yukine thinks Yato’s keeping Nora around as a “fallback” because he doesn’t trust him to fulfill his duties as a Regalia. Essentially it boils down to both of them worrying that they aren’t good enough for the other, which shows how close they are rather than how far apart they might be drifting.

They snipe at each other a bit, but when Delivery God duties call, they still work together and trust one another. When the Greed Phantom proves too small for Yukine to cut, he comes up with a scheme to make it grow larger, and in the process shows both Yato and the audience just how much he’s grown as a character. Yukine overcomes his own desire for money and the physical comforts it entails, but more importantly, he realizes that his concerns about Nora are due to self-doubt, and that the best way to “compete” with her is to simply be better than her. 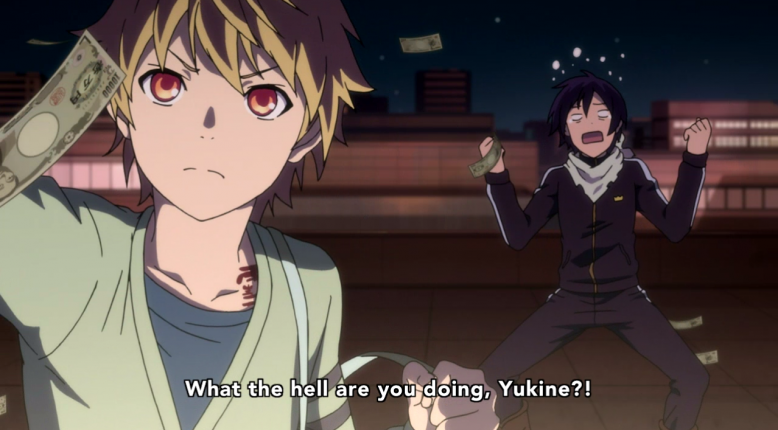 C’mon, Yato! What’s the point of having a bag of money if you can’t make it rain at least once?

Yukine also steps into his new role as exemplar, encouraging Yato to let go of his own material desires (although we’ll soon see that it’s a lot more than “material” for him), tossing away his own money pile so the Phantom will grow and they can properly defeat it. Exemplars are meant to guide and protect their gods, serving as moral compasses and ensuring the gods’ continued existence. Yukine proves he’s up to the task this week, Yato’s esteem for him grows, and the two become an even more formidable team than they already were.

And this would have been a fine, encouraging place for the episode to end, but ohhhh no, Noragami couldn’t stop there. Not only do we get a final, tantalizing shot of Ebisu in front of a wall of masks (dun dun DUN!) as he plots ways to take Yukine from Yato, but we also get the emotional highlight of the episode, and possibly of the series.

Yato may know that what he and Yukine did was the right thing, but he’s still upset about the loss of his shrine-building money. Which is roundabout when this happens: 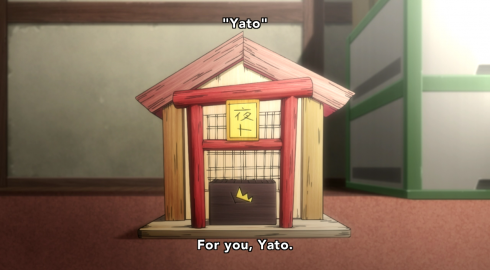 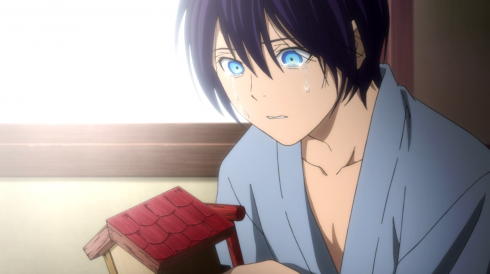 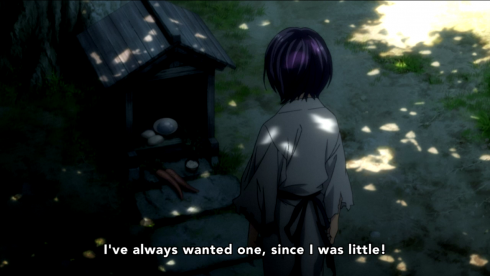 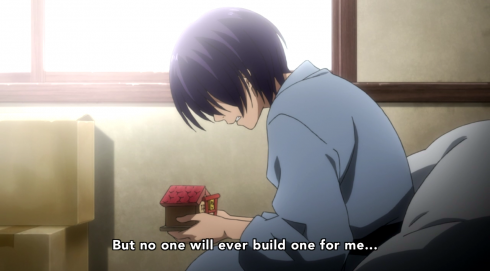 And everybody’s roofs sprung a leak and rained on their faces at exactly the same time. Crazy how that works, right?

Hiyori doesn’t fully understand the significance of her action, which makes the moment even sweeter, as she just sees this as a nice thing to do to cheer up a friend. But it’s bigger than that, because of the importance both tactical and emotional attached to shrines. A shrine is a physical representation of a god’s own consciousness, a way of saying “here I am.” This makes it easier for humans to believe and pray and, most importantly, to keep that god in their memory. In many ways, a shrine is an insurance policy, a way to be certain you’ll come back after “death.” Without a shrine, Yato is risking his very existence every time he takes on an opponent.

And that’s a big deal, yes, but it isn’t the primary reason why a shrine is so important to him. Yato wants a shrine for the same reason people want a home: Because it’s a place where he can belong, and be loved. Making a home for yourself has its own value, to be sure, but having one made for you shows that you matter to somebody else. It’s not just “here I am,” but “there you are.” And for a wandering, nameless god who’s had to scrape by on a revolving door of Regalia and scattered prayers for centuries, seeing that shrine would be like having someone say “welcome home” for the first time in his life.

So it’s no wonder he breaks down when Hiyori presents him with her lop-sided, handmade mini-shrine, a gesture of such sincere love, gratitude, and support that you’d be hard-pressed not to get a little lump in your throat yourself. 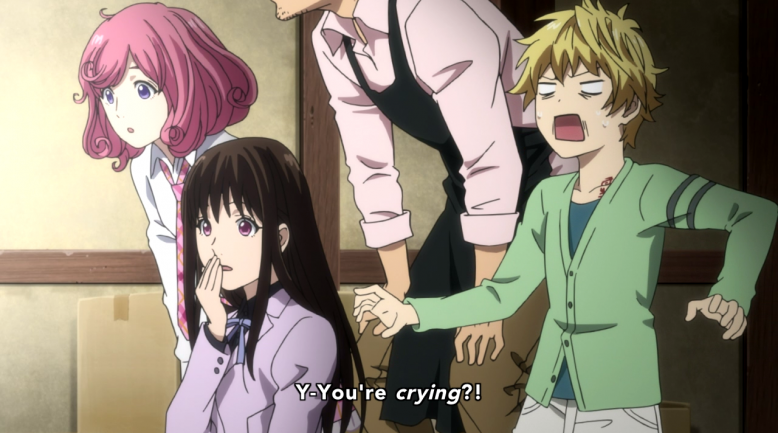 NO. ONLY A LITTLE. SHUT UP, YUKINE.

And this right here is what really makes Noragami great: Not it’s sleek battles or expansive mythology (although, I mean, those are great, too), but the way it’s crafted its characters, and especially our central trio. They all have their pettiness and their insecurities, and they fight and annoy one another and make plenty of mistakes along the way. But that just makes watching their growth all the more satisfying, and the bonds that have formed between them all the more real. The humans and gods of Noragami matter deeply to one another, and that makes what happens to them matter to us, too.

When done right, long-form, character-driven storytelling has a tendency to create the most emotionally resonant and memorable pieces of fiction, as we come to see the results of our characters’ decisions in how it affects the world, them as people, and their relationships with others. And so far, Noragami has very much shown that it’s doing it right. Let’s see how Ebisu and whatever challenges he poses builds those characters—and batters your blogger’s poor emotions—from here.