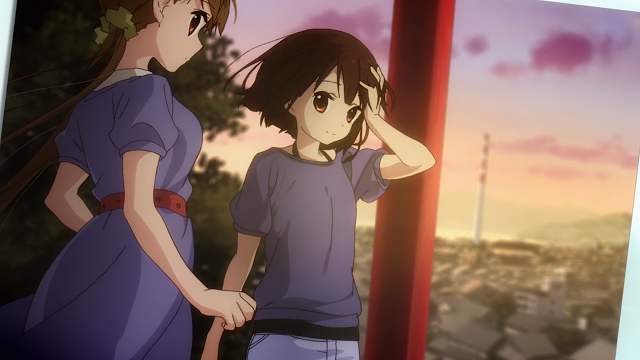 Coming at the same general subject from a different angle can often help to illumine aspects of the whole one was not either aware of or had not given it’s proper due, and that is precisely what the second of the Tamayura movies did for me. And in this case it was accomplished by focusing on the lives of some of Fuu’s close friends (in this case Norie and Kaoru) and acquaintances (specifically Chimo-san and Dougou-sensei), and focusing on their future plans. In Norie and Kaoru’s case it was related to what profession they would continue to pursue and in Dougou and Chimo’s case it was bound up with “tying the knot”. Finally. Quite a happy end in Dougou’s case to be sure!

This time around the season the movie is dedicated to is that of summer, and the focus on the characters is split into half – the first half being dedicated to Norie and the second half to Kaoru (and by extension Chimo and Dougou). 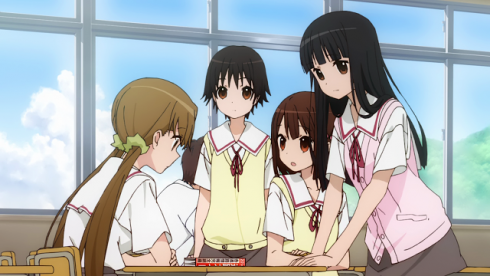 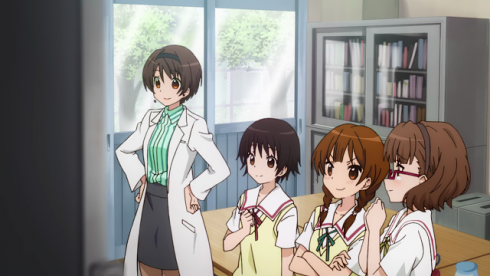 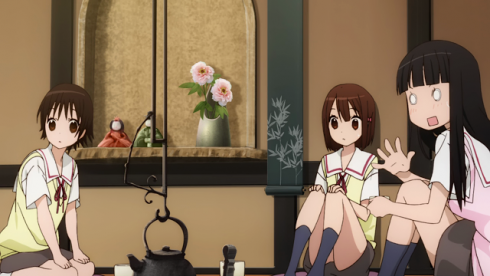 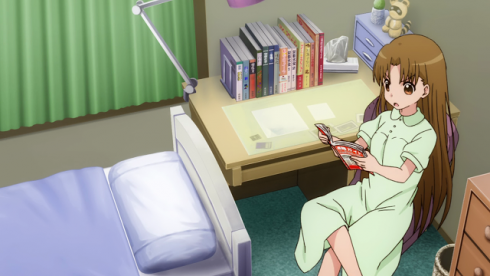 However, as mentioned before, two of the group of four friends’ finally getting focus and decisiveness on what they wish to do in the future and how they will support themselves reverberates back onto what for me is the primary message of the entire series: Fuu’s coming to terms with her father’s death and moving on in life – a true “coming of age”. 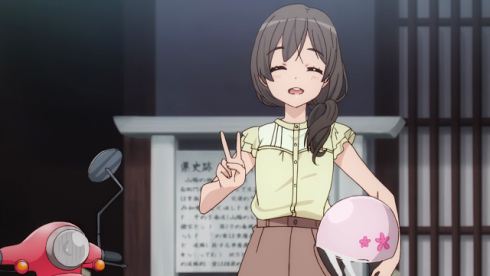 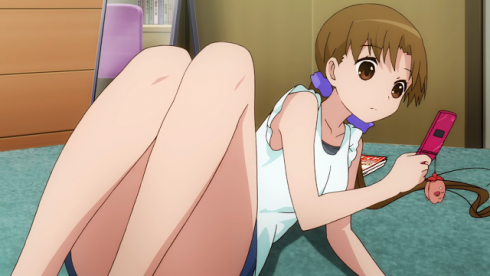 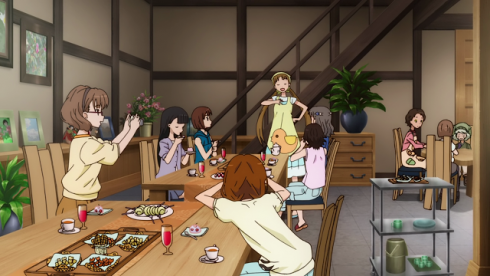 In Norie’s case her elder brother Masanori is a somewhat dense and insensitive, but despite normal occasions of moodiness and tsundere-like behavior does really care for Norie – the first half in many ways is his debut in the Tamayura franchise, and we see how strong an influence he has on the life of his younger sister. The scene of the two of them walking home with Norie hanging on to his shirt is a perfect visual representation of this, I thought. In Kaoru’s case her elder sister Sayomi has received a lot more screen time in the franchise up to now, usually in the context of whisking away the girls on a random trek climbing mountains somewhere. Sayomi has always been gushy and openly affectionate with Kaoru, who often behaves in a more tsundere’ish and playfully grumpy way in response while appreciating her sister’s encouragement.

In very general terms the emotionally open and free opposite the tsundere’ish and embarrassed emotionally responses dynamic is sorta reversed in their cases. Masanori is the awkward one opposite Norie’s openness, while Sayomi is the open one opposite Kaoru’s embarrassment. In both cases, though, the elder sibling has a huge influence in the life of the younger, though in different ways, and once again, it shines through in this episode exceptionally clearly. 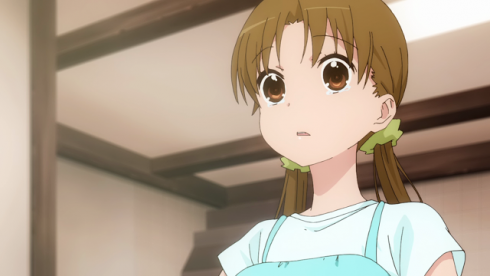 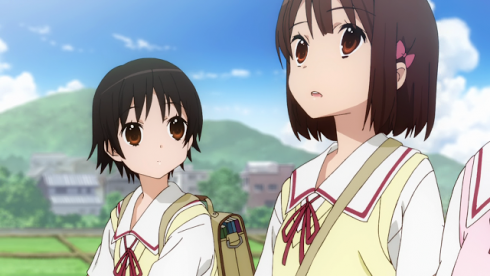 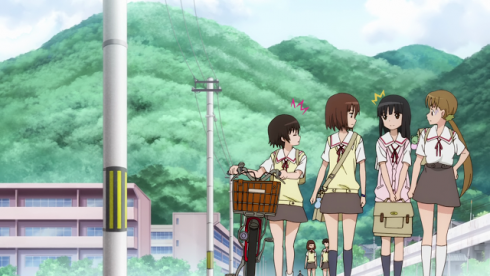 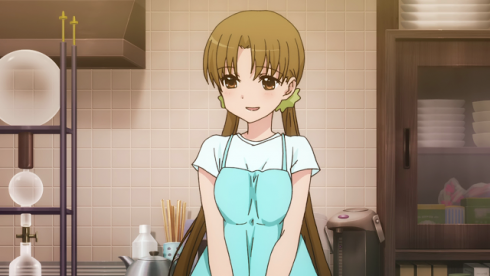 In the first half we are greeted by an unexpected announcement of Norie swearing off making sweets. It turns out her older brother Masanori shed doubt on her ability to become a world famous patissiere, and as a result she impulsively decided to try pursuing another career. It becomes very clear that Norie has lost her bearings in … well … most everything, which is not surprising in the least: she has been actively working towards being a patissiere ever since she was a child, and for which the main catalyst was also her older brother (this is mentioned in season one, for those who may have forgotten).

Wishing to somehow encourage and lift her spirits and wanting to express their love of Norie’s sweets, Fuu and the others decide to hold a sort of farewell party dedicated to Norie’s baking of sweets. Unexpectedly Masanori shows up (and we see that he and Sayomi actually know each other fairly well), and after realizing how much she enjoys both making sweets and seeing people eating them, as well as after hearing Masanori’s apology, Norie returns to doing what she loves. It turns out Masanori was envious of Norie’s single-hearted devotion to and knowledge of what she wished to pursue as a life path as he himself was struggling with discerning his own at the moment. A good moment for Masanori himself and Norie as well, and in some ways a very good “tying of the ribbon on top of the present” for Norie’s character. 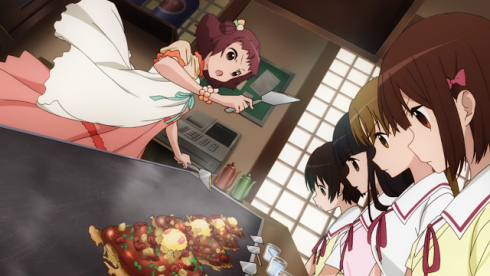 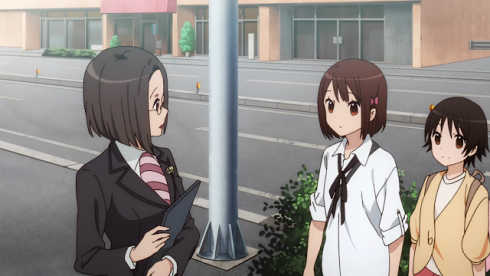 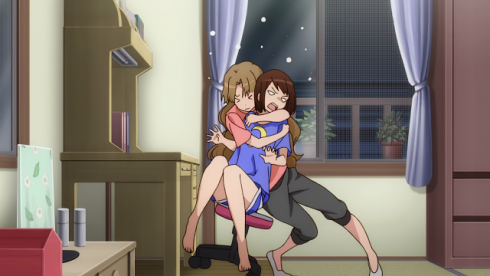 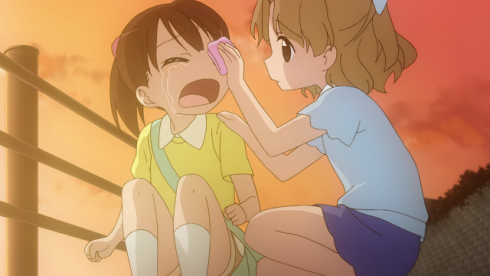 The second half is dedicated to Kaoru, though of course chronologically it takes place shortly after Norie is reconfirmed on her path. Kaoru’s being uncertain as to what she will devote herself to pursuing after high school is finished has been a pretty common theme in both the first and second seasons of the franchise, but finally we get some focus and even an initial answer this episode as the result of an unexpected event. The okonimiyaki shop owner and chef Chimo announces she is getting married and asks the girls for ideas for her reception. Kaoru has shown both skill and enthusiasm in the area of planning events – something she seems to have naturally picked up while helping her parents with town related events (mentioned especially in season two), and she agrees to help out planning this event as well.

While Kaoru is struggling over trying to find ideas for Chimo’s wedding the girls wind up paying an unexpected visit to a wedding, where Maestro (the owner of the Rising Sun Photo Gallery) is doing the photography for. While present there Kaoru observes and even becomes awed by the efforts of the wedding planner present – and this part is masterfully done. One can almost see the process of the “chaos coming into order” flash across Kaoru’s consciousness in the scene. After receiving some advice from Sayomi, who recalls how Kaoru once tried to walk all the way to Fuu’s house to cheer her up, Kaoru comes up with the perfect wedding plan for Chimo, who reveals that Dougou-sensei is to be her groom?! As a result we see Kaoru deciding to aim for a job like a wedding planner that brings people happiness, and a lovely bow is tied over her character as well. (And unexpectedly over Chimo and Dougou too.) 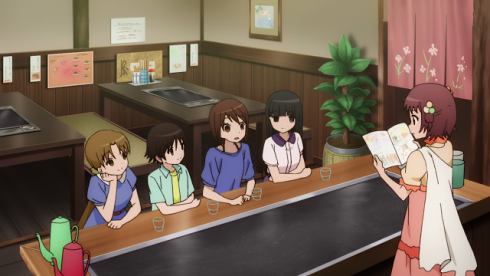 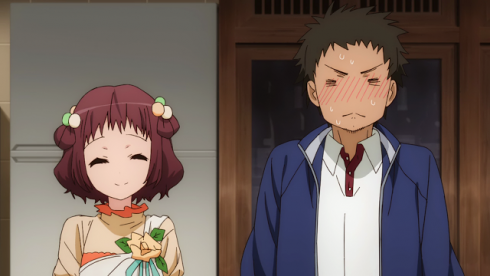 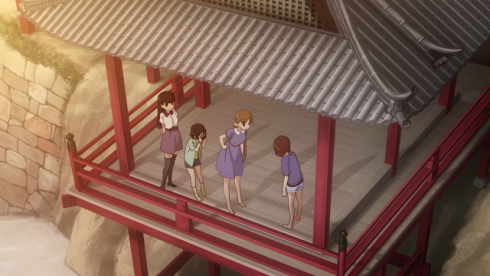 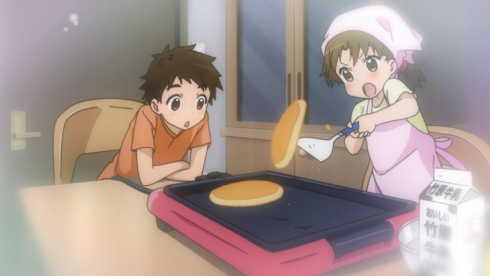 And so with the second movie we have a sort of conclusion for both Norie and Kaoru in relation to what they will be doing after high school, and perhaps in part it could be said that the first movie did this in part for Fuu, though in her case the catalyst was not an older sibling, but rather a mentor – Shihomi. This leaves Maon as the last one to get clarity on her next steps in life. When the series began Kaoru did not know what she wished to do, Norie was always clear on what she wished to pursue and Fuu was dealing and struggling with coming to terms with the death of her father way back when. But Maon is a different case – Maon has too many things she wants to do and cannot decide between them all. I would not be surprised if the next movie were dedicated to Maon finally gaining some clarity. And Fuu … I can’t help that there are still things Fuu has to realize to come to a place of closure and healing to properly move on. We shall see….

As with the first movie, the second one ended with the same ending song – a beautiful piece of music that masterfully summarizes Fuu’s inner struggle. But when placed at the end of this movie it acquires different dimensions once again. I include the translation at the end of this post once again, as I can think of no better way to end this post either.

For purposes of reference, here is the review of the first movie: Click Here

And, lest I forget … many thanks for the screenshots to infintezenith from his blog at infinitemirai!

Will see you all in the review of the next movie!