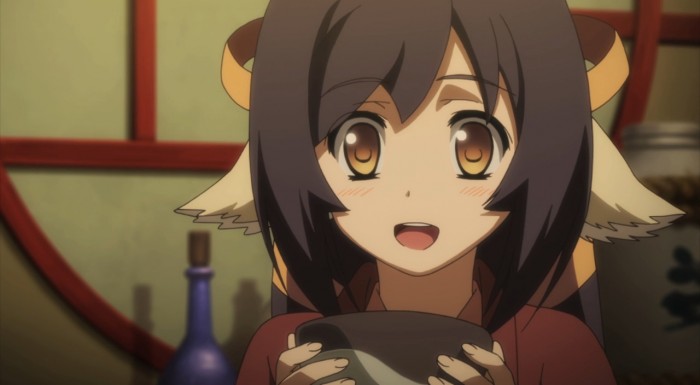 I’d say this is probably my favorite episode of the show so far. A chance to just focus heavily on Kuon and her family while still leaving a few mysteries hanging in the air. I don’t think there is a good way to talk about this episode without discussing the original series so I’m going to limit the non-spoilery aspects to this first paragraph. This was a pretty massive episode for Kuon in terms of getting to know her better and seeing her interact with family for the first time since she set out on her own journey. It was a cute moment seeing her dealing with her own embarrassment. Suddenly seeing people she hadn’t seen in a long time and feeling like she hasn’t matured as much as she might have liked. For her Karura and Touka are both very important people and she has them on a pedestal. Probably hard to look at herself and feel like she doesn’t match up yet to those people she’s looked up to. It confirmed Kuon being from Tusukuru and expands the world a bit more for those who are starting out with this series. A nice chance to see Kuon a bit flustered and also have Haku help her relax a bit so she could be herself around those two rather than being so stiff the whole time. 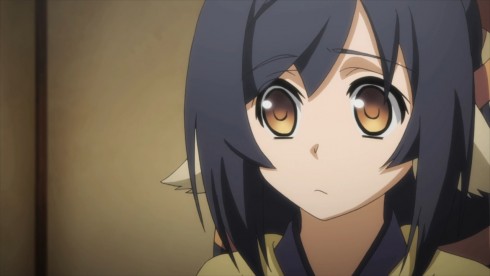 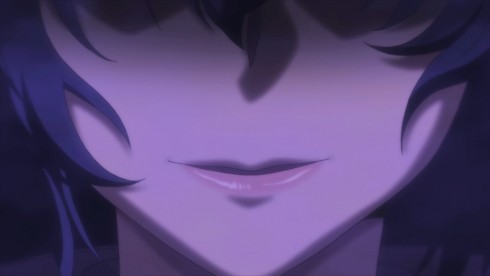 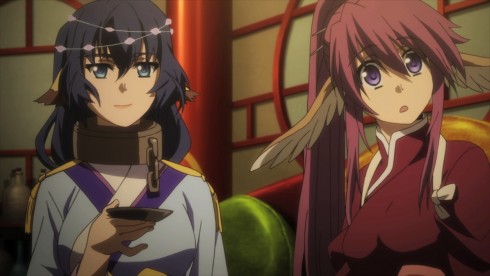 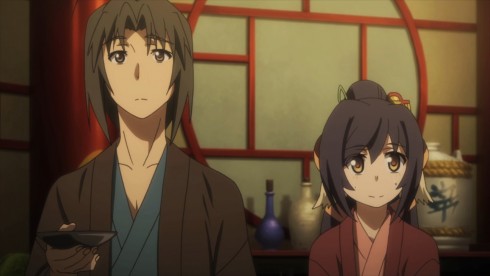 Now, onto the more expanded section. This was definitely a huge episode. Honestly it does seem to lock in the idea to me that Kuon is probably Yuzuha’s daughter. It seemed likely for a while, but just have that feeling at this stage. That is one character that due to her condition wouldn’t have been alive long enough to raise her own daughter. And if Hakuoro is the father…it’d explain why there was no father figure for her growing up either, surrounded and raised by various mothers. I will say that the episode hints strongly that the one she was closest to growing up was Eruruu. Her existence in the flashbacks being even more shaded and darkened than others. Plus the fact that she is so focused on learning medicine already made that a strong presumption. Kind of makes her childhood a bit interesting since she was basically raise by the main cast of the original show. Aside from Karura being obsessed with not being called “mother” the rest clearly fell under that labeling system. In some ways I think it makes sense that Kuon being surrounded by so many spectacular people would want to go out into the world and grow a bit along the way. Though there could be a bigger reason why she decided to make that move.

In a lot of ways it is interesting how Hakuoro remains such a key figure in this series. His name being slipped into the name of the inn Haku and Kuon are staying at (Hakuroukaku) and Kuon having literally given the name Haku to the MC. She got a bit of an embarrassing moment there being found out for passing that name along. Such an important person for everyone in that show and even his name has become something you carry along and use where possible. 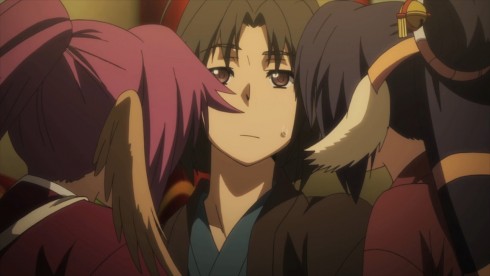 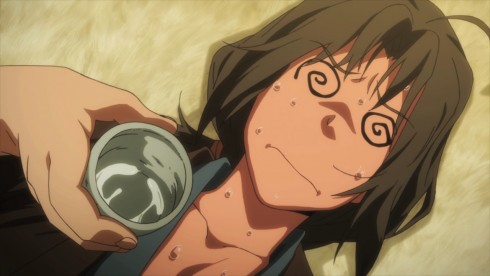 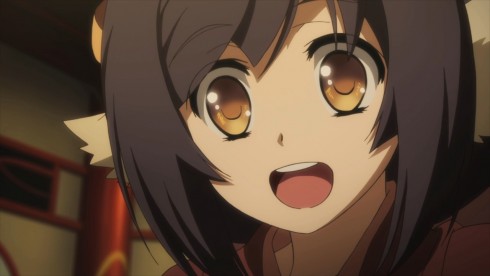 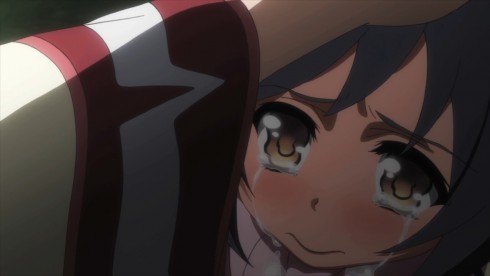 Not all that surprising that Kuon was such an “active” child in the past. The kid being quite the free spirit getting into all kinds of trouble. But, also clearly she was a child raised with a great deal of affection by those around her. Can see how her antics would now cause her some embarrassment and want to show how she’s grown. But, I like how Haku handled things in this episode. He really took a hard hit in that drinking game by going all out. The result though being that Kuon was too concerned about his condition to keep acting so stiff around Karura and Touka. There really was no need to be so uncomfortable, they had long accepted her growth and also appreciate Kuon for who she is. There’s no need to completely change who you are.

What is interesting is that those two came out here from Tusukuru to observe Yamato and the kind of country that it is. This is a pretty massive place and one that could be a useful ally or a difficult enemy of their own country depending on how things turn out. It makes sense to send frankly two of their most powerful fighters out here to keep an eye on things. In the worst case scenario they could fight their way out and get away without much trouble. Having those two around if/when something big happens will be a good idea. It isn’t a bad thing to have family around, but especially when that family could basically obliterate a small army on their own XD. 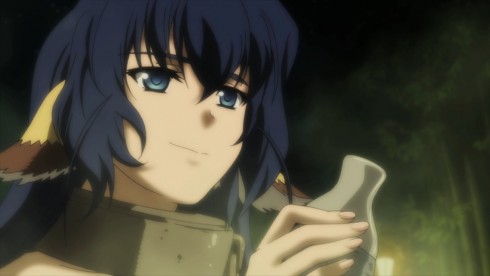 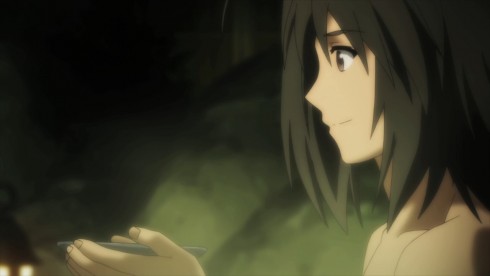 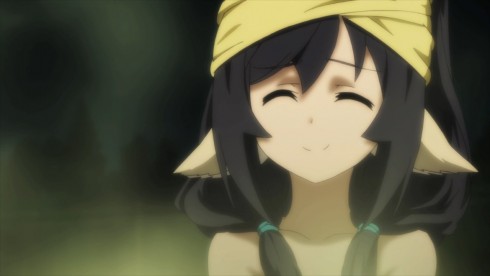 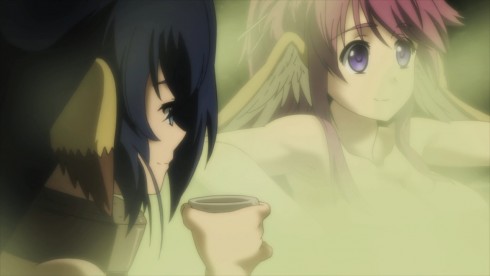 Once again I just find it nice to see how the show deals with potential embarrassment without doing anything stupid. Instead of Haku getting murdered by Karura in the baths, they have a chat, share a drink, and that is that. Of course she knew who he was, but she did handle things very calmly. Even at the end while Karura, Touka, and Kuon are in the baths together the plot continues forward. You can call it a fanservice scene which it is, but one that doesn’t feel over the top. There is a very emotional scene there when she tastes the drink that had been made well in the past by presumably Eruruu and it was now being shared among family.

Once again the show ducks any embarrassment or huge reaction by Kuon at the idea of her and Haku being together. It still seems to be something she hasn’t even thought about or given consideration. The only real embarrassment for her with him was the issue that she gave him a name that clearly has a lot of personal meaning for her. 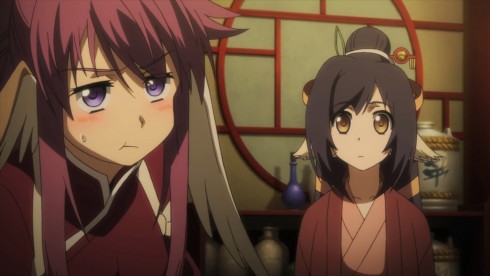 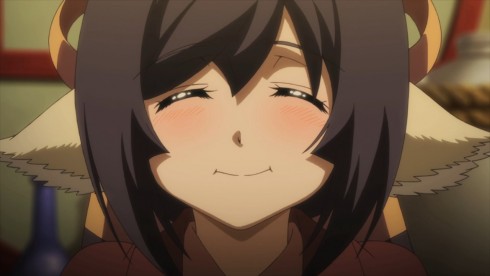 Again, I’d say this was the best episode so far. The core of the cast right now is Kuon and Haku. So an episode that basically focuses entirely on them is a great thing. A chance to find out more about Kuon’s past, the kind of kid she was, and her family situation. I think it goes to show that it’s all about what kind of story you are telling. Last week didn’t feel that important of an episode, but this one? Now this felt a lot stronger to me. Kuon is one of the most interesting female leads of the fall season so I’m all for giving her more time to stand out and shine.