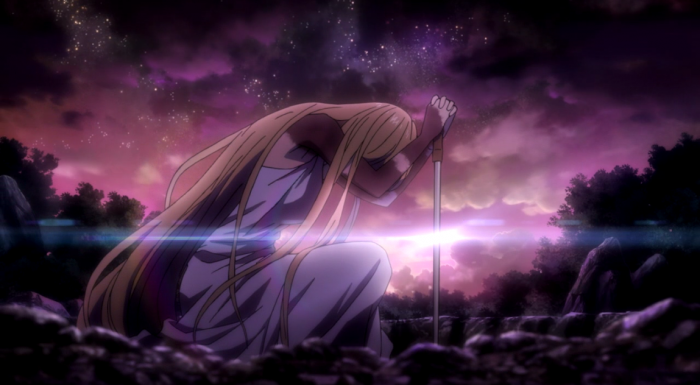 It was pretty clear this was going to be the big finale for our half-season-long Bishamon story, and Noragami capped it off in fine fashion. This season really is everything you could want from a sequel, as it brings back all the things that made the first season good (stylish action and music, a great sense of humor, characters you wanted to hang out with, a complex but coherent world with a lot of room for growth, bursts of philosophical or emotional depth) and grows them in unexpected and exciting ways, introducing new characters while also revealing new facets about old ones, and developing them all through conversations and conflicts alike.

The wider and deeper cast has raised the stakes both globally and emotionally, and this finale didn’t disappoint in terms of big, gorgeous fight sequences as well as small, touching character beats. Simply put, Noragami has catapulted from “good” to “great,” and if it can keep this up it’s not only all but locked in as one of my top anime picks two years running, but could very well become one of my favorite shounen adaptations of all time. 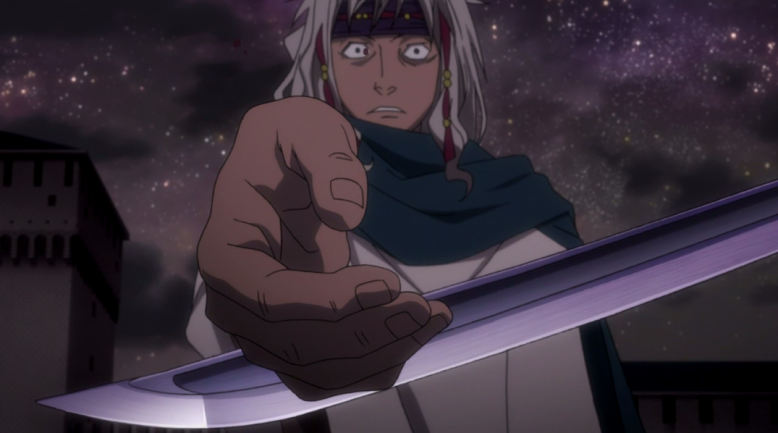 Kugaha’s having a rough time going it alone. He could really use a hand.

After the many reveals from last week, this one’s about how the characters deal with those revelations, as Bishamon takes Kazuma’s own epiphanies and applies them to the problems that remain. Kugaha shows himself as the mastermind, accusing Bishamon of not being worthy of her title and encouraging her to die and be reborn as a “proper” war god. Yato’s having none of it, though: He calls out Kugaha for acting like a spoiled child and demands he take responsibility for himself rather than blaming Bishamon.

Yato and Yukine get one awesome fight against one of Kugaha’s masked Phantoms, but this episode is about Bishamon and her Regalia, not our main characters (something Hiyori wisely points out when she urges them to head home). Bishamon won’t let Kugaha be killed because, in the end, he actually did believe he was doing the right thing and never blighted her as a result. She apologizes for the emotional rift that developed between them, but he’s killed too many innocents to allow him to say, and so she releases him from her service. 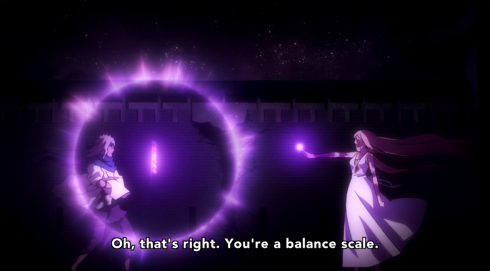 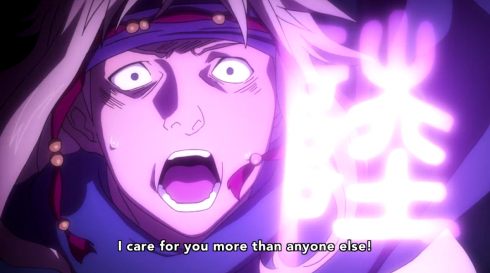 Then it’s all over but the clean-up, another of Noragami‘s trademark supernatural battles painted in sickly greens and purples, with swooping cameras and smeared animation and a fast-paced but eerie electronic score. Clad in a thin dress and wielding a rusted sword (stripped to her barest “self” as one who lives to protect, in essence), Bishamon takes responsibility for her Regalia, doing “what must be done” to rescue those that remain and defeat Kugaha’s final Phantom, thereby freeing her lost Regalia in the process. It’s a small victory, but the best she can do at this point.

Things aren’t all doom and gloom, though. No, Bishamon and her tiny clan will live to fight again, guided by a battered but wiser exemplar, because AWW YEAH, KAZUMA’S ALIVE! (Ah-hem. Sorry.) He feels he’s failed Bishamon too many times and will only hurt her more, but in the episode’s most moving moment, she assures him that she doesn’t mind if he does. The pain is important, after all—it’s part of any meaningful relationship, yes, but it also helps her know when she’s strayed from the path humanity needs her to follow. She’s willing to accept it, and learn from it, and so he agrees to do the same. And if that’s not love, I don’t know what is. 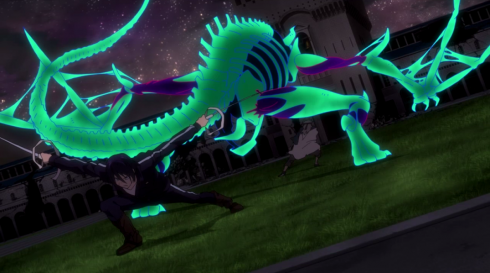 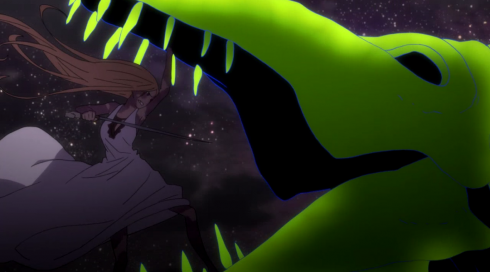 The entire episode is a tense, touching, and ultimately hopeful capstone to the arc, but I rushed through the details a bit because I want to spend some time with the episode’s central idea, which is that gods, by their nature, can “do no wrong.” Yato first says it when he’s berating Kugaha, and Kazuma later echoes this when referring specifically to Bishamon. (Although, interestingly, they use different words in the original Japanese, as Yato refers to moral goodness and Kazuma to the act of making “mistakes.”)

My kneejerk reaction to this was a sharp “Of course they can do wrong, have you been watching this show?” But then I took a moment to think about it and realized that my reaction was, in a way, sort of proving Yato’s point: I’m assigning human (and personal, and debatable) concepts of correct and incorrect behavior to beings that, while possessing distinct personalities, are essentially amoral forces of nature shaped by their worshipers. They can no more “do wrong” or make mistakes than an earthquake can. 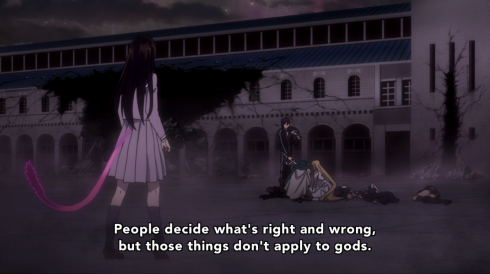 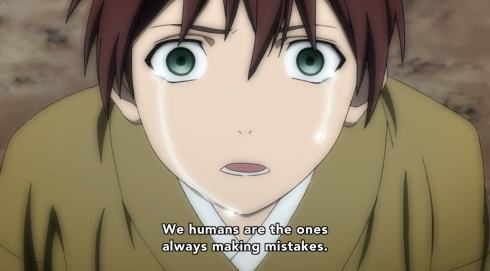 The philosophy/theology/mythology (your choice) of Noragami is both quite simple and deceptively complex, and we really see the culmination of that belief system on display this week. To oversimplify a bit, the process goes like this: Humans have needs and desires. They develop codes of morality based on those needs/desires. Using those codes, they (1) create social norms and laws for the things they can control, and (2) pray or wish for the things they can’t. The force of these prayers and beliefs gives shape to gods (kami), supernatural forces who can shape the world according to human desires and needs.

Then, when humans die, some of them become Regalia. The moral code they developed during life (both through cultural practices and personal experience) stays with them as perceived “good” or “sinful” deeds, which guides their actions and, in turn, shapes the gods they serve. (Remember, a god can’t be stung by a Regalia who truly believes they are doing good, even if others disagree with that belief.) 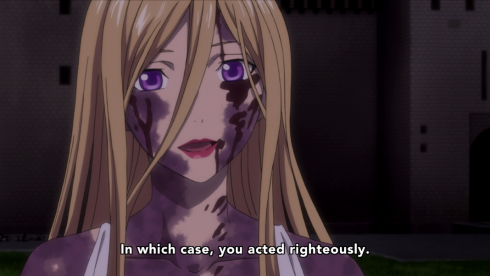 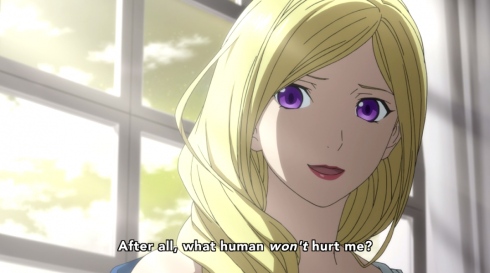 In other words, morality is cultural, sometimes individual, and incredibly fluid. Gods exist as supernatural forces given power and will by humanity, and so they (and the “morality” they stand for) change when humanity changes. This suggests that Bishamon and Yato have shifted into the roles of protectors because (most of) the people who believe in them place more value on saving others than on destroying them. Notably, Kazuma and Yukine cite a desire to “protect” as their dominant motivator. As their gods’ primary (and in Yato’s case only) Regalia, these desires strongly influence their masters’ own actions and philosophies.

Now, not everyone will agree with this worldview—I’m not sure I do, to be honest—but I will say there’s something inherently empowering and hopeful about it, as it acknowledges humanity’s ability to make mistakes, yes, but also celebrates their ability to learn from them and adjust their beliefs and actions accordingly. It gives humanity itself a far larger role to play in the world beyond the Near Shore, creating an intricate power balance between these supernatural forces and the humans who both serve and shape them. 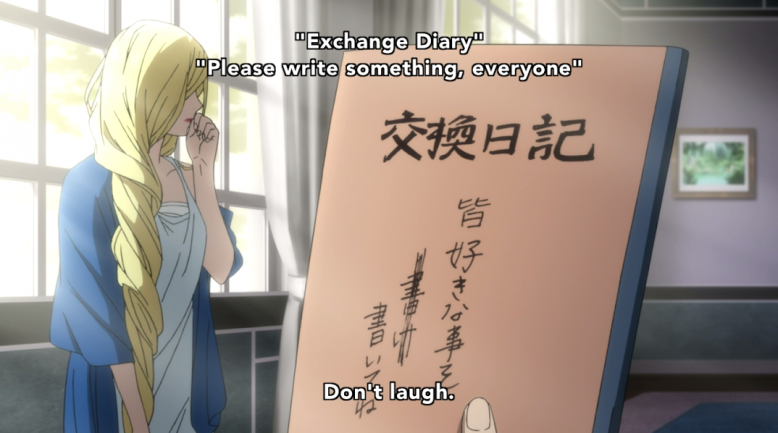 Don’t worry. I’m far too busy “AWW”-ing to have any lung space for laughter.

When Kazuma (thanks in part to Hiyori’s sharp observations about what it means to be a family) realizes that the lack of communication between Bishamon and her Regalia was destroying their clan, Bishamon realizes it as well, and immediately begins finding ways to correct that behavior. She takes responsibility for her own fallen Regalia this time (rather than leaving it up to Yato) and begins that adorable Exchange Diary so she can learn more about the people in her retinue.

They’re working to be a family in practice as well as in name, with Kazuma functioning as Bishamon’s “guide” for what is “proper” by human standards and what is not. It’s a quiet, uplifting ending brought about largely by Kazuma’s love for his master and his recognition of the need for change. And that really is a beautiful place to end a story arc.