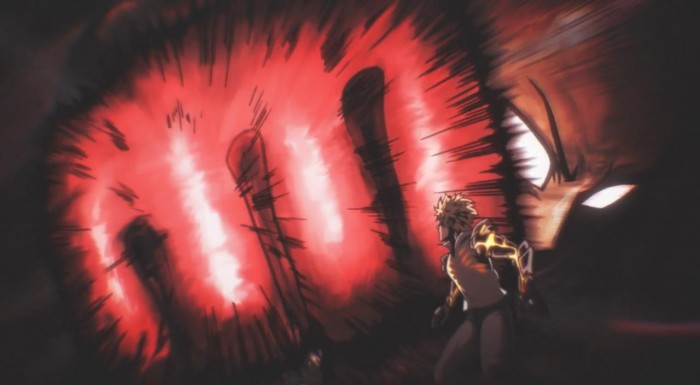 While One Punch Man has been one of the best shows to come out this season, this was actually the first episode where I was so engaged that I couldn’t tell how much time had passed since I had started watching the episode. More importantly, I was secretly hoping for there to be just a little bit more time before the dreaded ending theme rolled in. 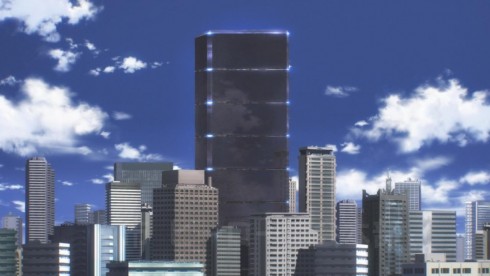 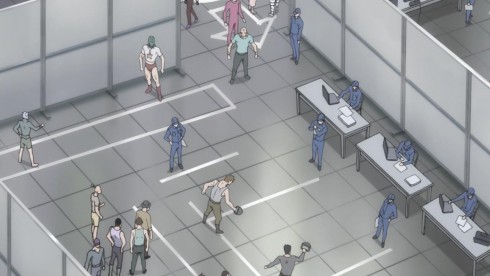 So what’s changed? Well for one thing, the show has shifted gears a bit. Instead of simply having its outlandish and intriguing characters exist in a vacuum, One Punch Man is doing the necessary world building to support these characters and have them feel believable. What kind of world is it  where monsters like Saitama and Genos exist? How does that even look? How is the world even still standing given how many monsters and villains continue to appear?

Until this episode, the show was content to brush off those questions, and pretty much just asked the audience to roll with it. After four episodes, however, that suspension of disbelief was becoming more and more difficult to keep going. To add to the growing list of problems, Saitama and his OP punches and battles, while cool to gawk at, were starting to feel repetitive. I daresay it, but he was starting to fall into a common trap that many superheroes like him fall into. 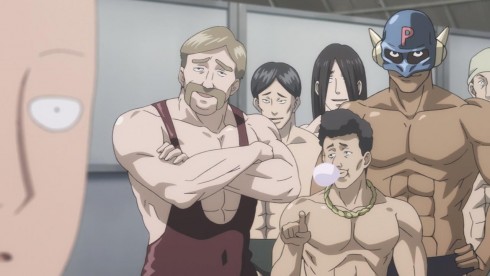 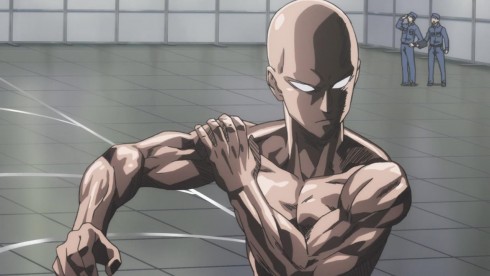 I think in the west, we see that kind of issue a lot more prominently with someone like say Superman. What’s so boring about Superman is that he’s so strong, so pure, so powerful and so unbeatable, that its hard to relate to him. There’s simply put, no major hurdle for a character like that to overcome. Saitama was coming dangerously close to that, so much so that even HE was bored of it all.

But make no mistake, Saitama is no Superman (Thankfully). While Saitama may have god like physical attributes and powers, he struggles to deal with society, like any normal person. Saitama’s inherently flawed in that he may be possibly the strongest character in his show’s entire universe, but that doesn’t exactly mean he’s perfect. And that’s fairly important, having a character that can fail at SOMETHING, is very important. 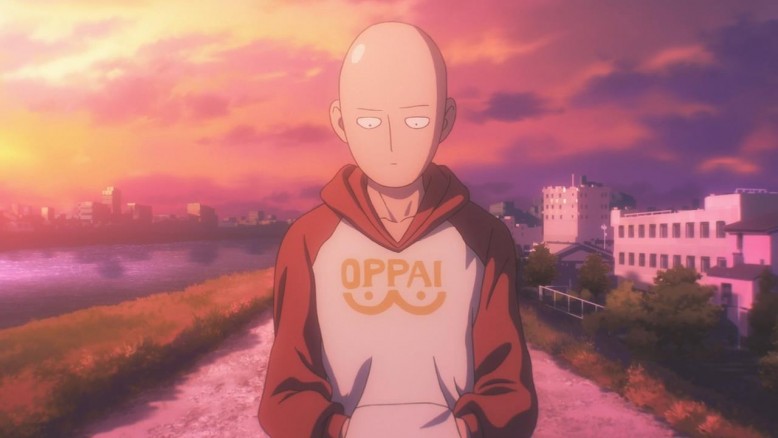 Last week eluded this to a bit, but it was this week that we really got a taste of how bad Saitama is at standing out, being popular and being recognized for how awesome he is. He’s got some serious bad luck in the same way that say… Spider-Man and Peter Parker do in western comics. I bring up western comic book heroes, because they serve as a nice contrast to the decidedly Eastern approach that One-Punch Man is taking. By combining Superman and Spider-Man, One-Punch Man has long solved a problem that has been plaguing the West in terms of super heroes and storytelling.

One of the reasons I think its made possible though, is because of Genos. Genos has slowly started to fall into the “Sidekick” role for Saitama, but I think calling him that is boiling it down too much. Genos exists as a perpetual contrast to Saitama, and highlights Saitama’s best and worst attributes by simply being next to him. 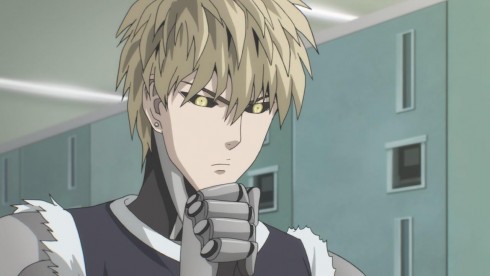 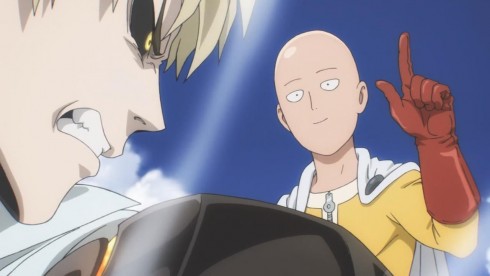 Genos is diligent, hardworking and earnest, he’s also extremely cool looking and makes a pretty great impression. He’s also got some really nice hair, which I’m sure is pretty intentional when its put next to Saitama’s bald head. And as we saw repeatedly throughout the episode, Genos easily makes friends and becomes popular, while not really caring about either of those things.

Saitama does want those things, he wants to be appreciated, to be accepted, to be applauded for his efforts, like any reasonable human being. That element to his character, makes him human and therefore relatable. Genos, on the other hand, for how cool and powerful he is, faces an mountain so tall, that he has no hope to ever be able to conquer. Simply be existing next to one another, Genos and Saitama become more human, more likable, and more interesting than they do by themselves. 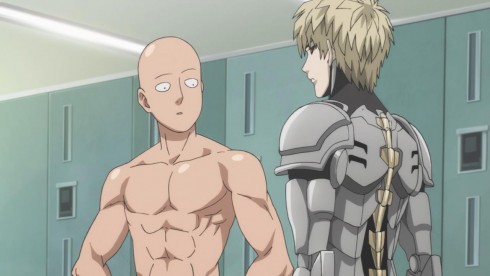 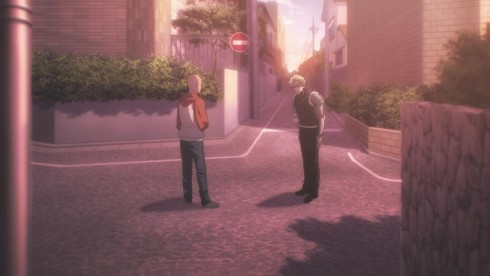 Its interesting, because this is in direct contrast to say, the western approach of characters like Batman and Robin. Robin has arguably always kind of benefited from Batman’s immense popularity, and I personally believe can’t work without Batman (even though DC Comics tries to have it happen anyway). There just isn’t the kind of give and take relationship that Saitama and Genos have. They just work off of each other a lot better.

So… I mentioned that there was a lot of world-building in this episode, but haven’t really touched on that at all. Its simply because the world building served its purpose, in that it highlighted its characters beautifully. A world that serves its characters, and gives us new insight into them, its arguably one of the most powerful tools of the anime medium, and Japanese writing in general. 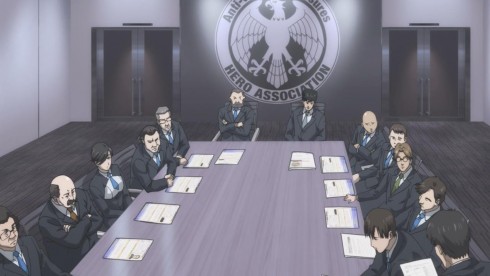 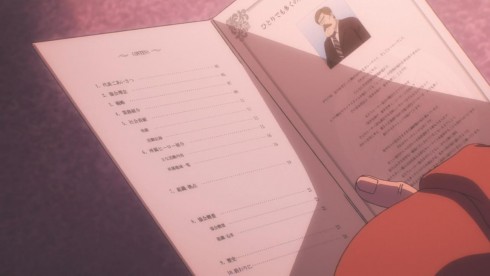 The Hero Association doesn’t disappoint in that regard. There’s a clear hierarchy and structure to the organization, and it makes that they exist to deal with the constant problems that the world seems to be facing. More importantly though, simply because of BEING an organization, it has the same problems and issues that any kind of big organization in today’s world does. There’s politics, ranking, and bureaucracy that seems to drive everything. (As a side note, it seems that the organization actually came into existence BECAUSE of Saitama, as the man who funded and founded the organization has a very distinct jaw, similar to a certain kid that Saitama saved before he became a hero…)

Both Saitama and Genos take on the Hero Qualification exam and pass, but its Genos that gets the highest S-Rank, while Saitama is given a dissapointing C Grade. Having Saitama barely pass because he almost flunked the written test is not only true to his character, but also pretty clever. By having Saitama not be recognized in the system, it plays to the character’s backstory (he couldn’t get a normal job afterall) and also gives us something to feel bad about. 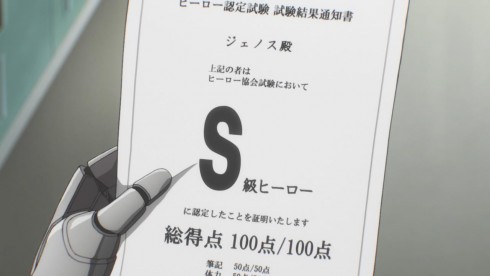 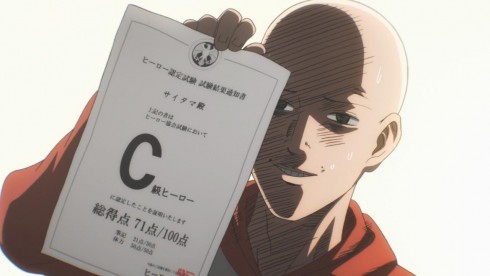 Saitama is so awesome and he’s done so much, yet the Association seems obsessed with Genos. Its frustrating to watch, and points to a clear sense of incompetence. There’s a clear distaste for society at large in the writing here, and how the youth seems to continually get screwed over by the government that simply doesn’t understand how to recognize, yet alone utilize the talent it may already have.

What’s important to note here, is that despite the unfairness of the situation, Saitama isn’t even remotely jealous of Genos. He’s happy for him, and that makes him infinitely more likable. Genos on the other hand, doesn’t care about anything beyond learning to be as strong as Saitama, and continues to idolize him. 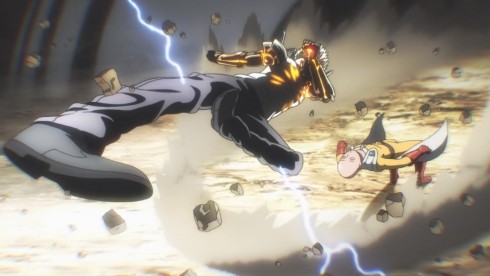 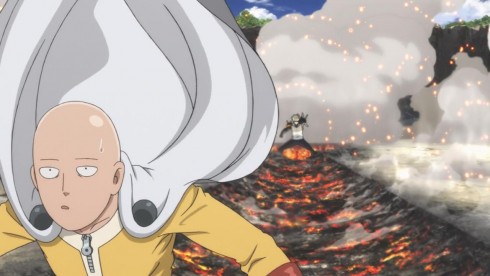 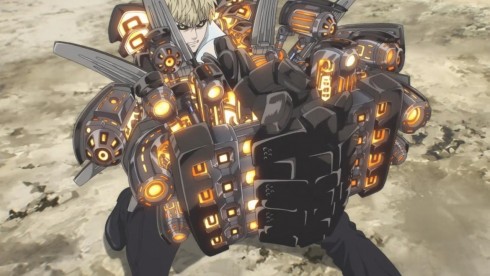 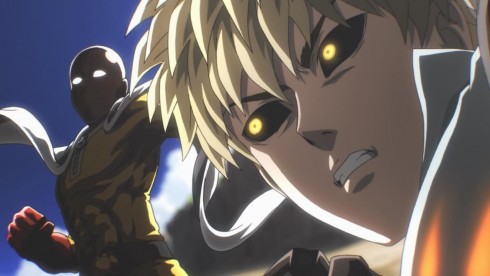 Having promised Genos that he’d take him on as a disciple, this week had Saitama give his new student a training session. Lest you forget this is a gorgeously animated show with insanely great fight choreography and simply breathtaking action, well, there was a lot of that this week. What impresses me is how my jaw literally drops every time one of these fights happen. You’d think Mad House would have long reached the upper limit of awesome fight scenes (and their animation budget), but then we’ll get an amazing battle in literally every episode.

The destruction, the fluidity of motion, the sudden slow-motion segments, the punches, the attacks, the dodges, everything just looks so epic. In many ways, from an animation stand point, the action in One Punch Man is the realization of everything that Dragon Ball started in the shounen genre. Its just so pretty, so great, that I’d say that the series could LIVE on the action alone. Yet, thankfully, there’s a nuanced story, interesting characters and quirky comedy to support it all. 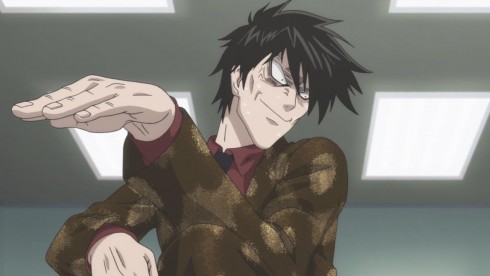 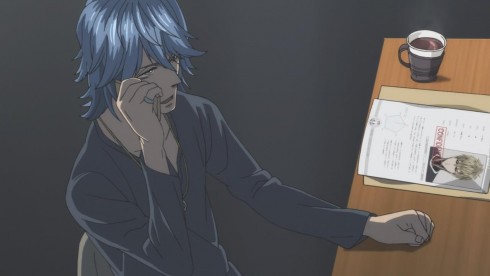 And before I forget, this week also introduced us to two new characters. “Amai Mask” and “Snek”, both of which didn’t leave much of a great impression. One-Punch Man continues with the funny names, Amai being the word for “Sweet” in Japanese, while Snek is just… well, he’s not much of a good dude to begin with.

Both of these characters actually show what’s currently wrong with the Hero Association, in different and distinct ways. Both of them are A-Rankers, although the air of dignity around each is markedly different. Snek is the typical bully, extremely prideful without the skill or talent to back it up. He tries to raze Saitama as a newbie, but obviously gets clobbered. 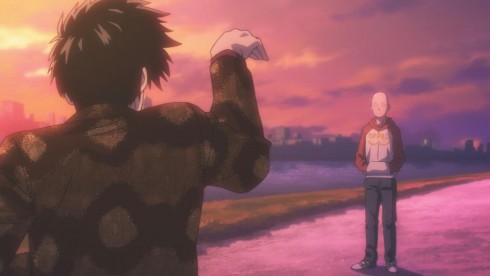 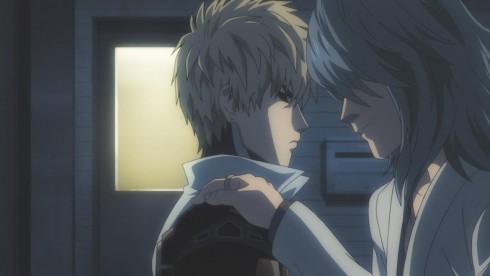 Amai Mask more or less does the same thing, showing off his superiority under the guise of “welcoming” Genos, though he does so in a more subtle, cool way. Amai Mask is definitely the most popular hero, as the simple act of seeing him interact with Genos is enough for some women in the area to be excited to shake hands with the cyborg.

As to how Amai Mask will play into the larger story? I’m definitely curious. Its unclear as to how strong the guy is, or what his agenda will be, but I’ll say that he gives off a nasty vibe, in a way that’s simultaneously off putting and intriguing. It’ll be nice to see where the show goes with him. 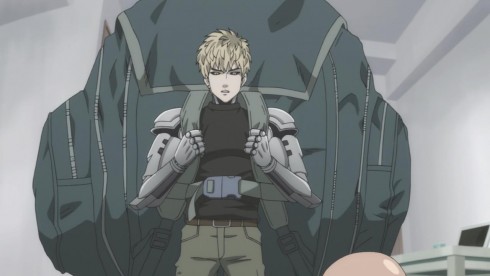 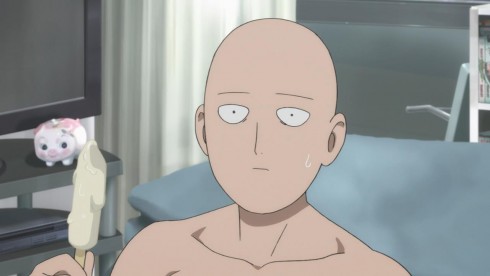 The final part of note, is that Genos actually ends up moving in with Saitama (in that terribly cramped apartment). The stack of huge bills and Saitama’s change of heart is a nice comedic note to end the episode on. For those of us who wonder how Saitama survives despite seemingly having no job, I guess that’s been answered for the interim.

Okay… So I rambled a bit longer than I usually do with regards to this episode. That in itself should clue you into the fact that the episode was markedly superior, which it was, at least for me. I think One-Punch Man actually leveled up a bit this week, and its gone from being the new kid on the block, to an anime series that I’m genuinely excited for and looking forward to. The weekends this season are definitely great, starting us off with Fairy Tail and capping it off with One-Punch Man.