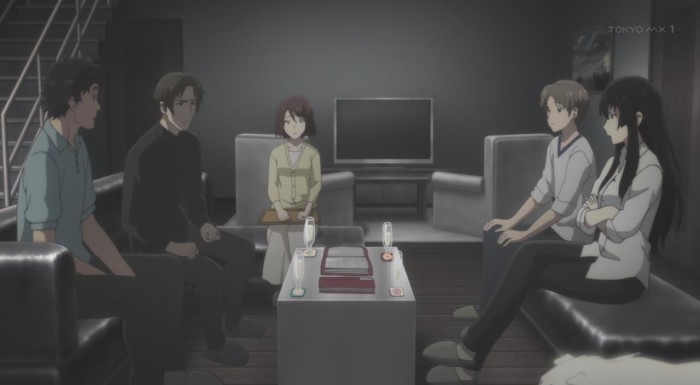 Sakurako-san’s already demonstrated that its a very good character driven show, but it was this week that it really honed in on the mystery part of its premise. Great characters, a strong chemistry and dynamic are great, but its awesome to see the show also really nail the fundamentals of a good mystery story. 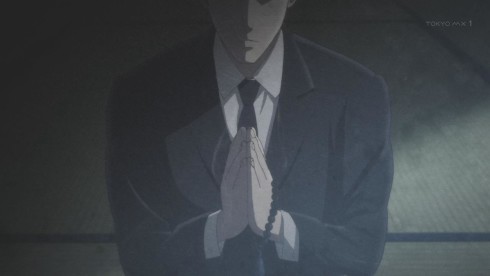 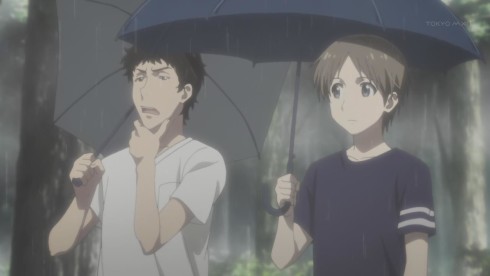 The reason I think this week’s episode was so good, markedly better than last week, was because of how it approached its storytelling. This episode is the first instance of a multi-part story, and the show is all the better for it. This episode is clearly all about building up the mystery and intrigue, more so than just dispensing with a clever idea and executing it as quickly as possible.

A good mystery needs time to brew, to marinate, and I think a slow, restrained but steady pace was what really amped up the interest in the mystery. Utsumi-san, the cop from the second episode (and the show’s last stand out episode) makes a return this week, and brings a rather odd situation with him in tow. 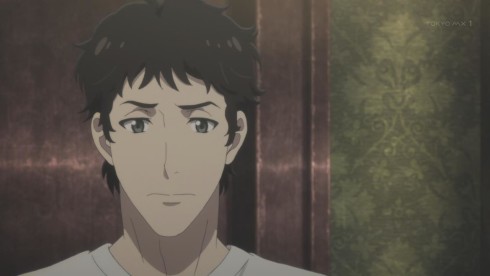 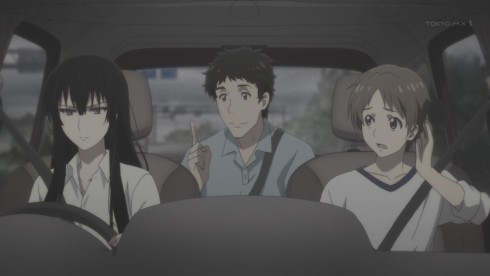 I like Utsumi, if simply because he’s such an interesting bundle of contradictions and goes against general expectation. Utsumi is a police officer, but unlike say, someone who’s confident, authoritative and strong, Utsumi is the exact opposite. He’s super nice, easily malleable and confident is probably the last word I’d use. He’s got a very light-hearted, almost comedic vibe to him, and he’s someone that just brings forth that feeling of easy going into everything he does. He also cares very much about people, something that I think really defines him.

Like Utsumi though, his actual problem that he brings to Sakurako-san breaks away from the norm. You’d think that since Utsumi is a cop, he’d be bringing some murder mystery that the police can’t solve, or something of that nature. Thankfully, that’s not the case, the particular problem is actually a personal one. One of Utsumi’s old high school friends that he recently reconnected with, is convinced he’s cursed and going to die. 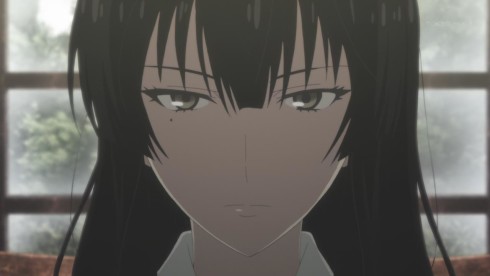 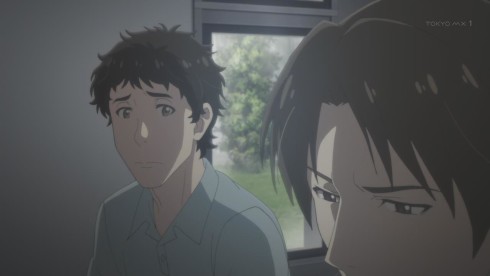 That’s where Sakurako-san comes in. While Utsumi may be easy to pin down, she is the very definition of cold hard steel. Its because of Sakurak0’s no nonsense, blunt and fairly persuasive way of talking (EXCEEDINGLY rare in Japan, more so than the west), that she gets asked to go and see Utsumi’s friend Fuijioka and knock some sense into him.

Fujioka, a man in his mid-thirties, is convinced he’s going to die, and all of it stems from some seemingly odd deaths in his family, coupled with a certain Dog, Hector. All of Hector’s previous owners died at a young age, and Hector himself warmed up to his owners shortly before their death. 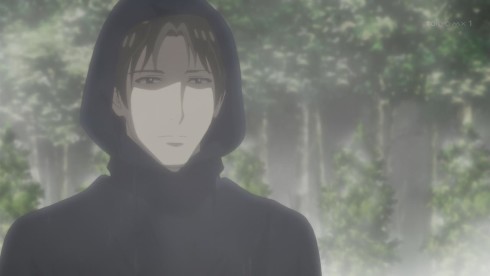 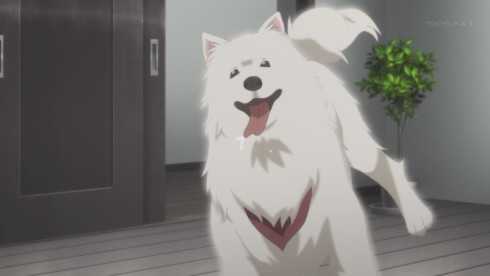 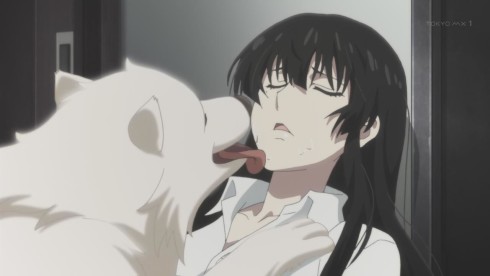 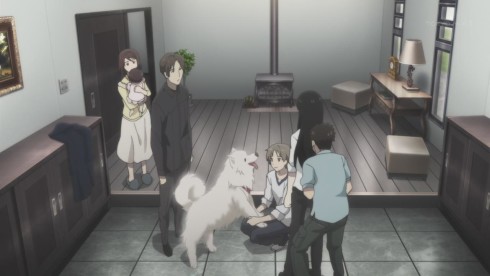 So we’ve got Fujioka, a rich, family man, with a very vast house who took in a cursed dog, and is now convinced he’s going to die. When we do see Fujioka, he’s the very definition of morbid. The guy just has a scowl that just screams depressed, perpetually on his face. He’s well off, and has a lovely and caring wife and new born daughter. Yet there’s this whole belief of his that he’ll die, because its his destiny. Its just absurd enough to be interesting.

I think what really sweetens the deal though, is how wonderful Fujioka’s family and dog really are. I myself am not too fond of dogs, So the show gets extra brownie points for creating a big, adorable and lovable dog that even I can see myself melting around. Its because even as an animal, Hector is a pretty solid character with some interesting traits. He’s friendly of course, but its his extreme friendliness with Sakurako herself, and that whole “cursed” dog that can smell death thing, that makes him so interesting. 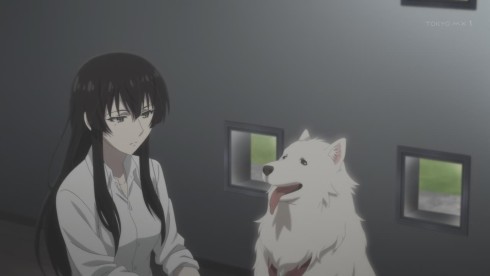 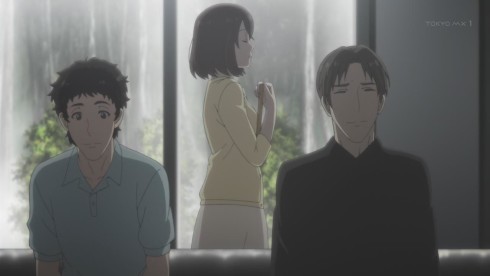 Hector’s a natural fit for this show, and his mystery embodies everything that makes the show so powerful. He’s got a tragic, unfortunate side to his backstory, yet he’s lovable, adorable and easy to like. Right from the get go, the mystery has me invested because its anchored me with Hector as its focal point.

Of course, Added to that is Fujioka’s lovable better half. There’a a sense of niceness and welcoming that makes Mrs.Fujioka likable. She’s a young mother, who’s dealing with her husband’s sudden weird attachment, but she remains positive, upbeat and works through her stress with a tender love and care that’s hard to come by. Much like Hector, she’s and her baby daughter are just adorable and extremely likable. 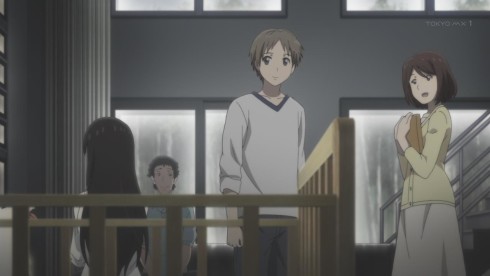 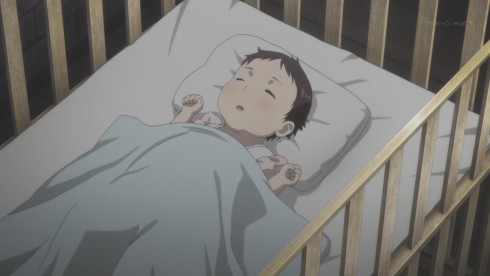 The happy family, even Fujioka’s dedication to his family, is heart warming, and by all intents and purposes, they should be happy. The whole “I’m fated to die” thing feels extremely off as a result, and its meant to. What Fujioka is doing is weird, and I think both the audience and Sakurako herself are pretty aware of that.

I like how Sakurako approaches the whole situation. She’s quiet at first, and thoughtfully takes in the situation. Sakurako’s rather reserved demeanor gives a chance to get to know our other lead, Shoutarou a bit better. Again this week, we get some more insight into what makes him tick. 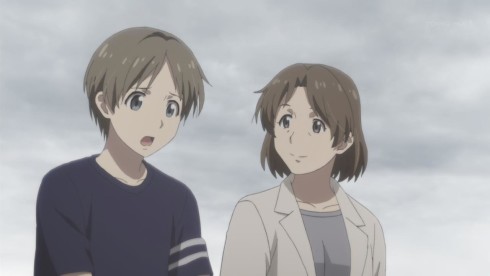 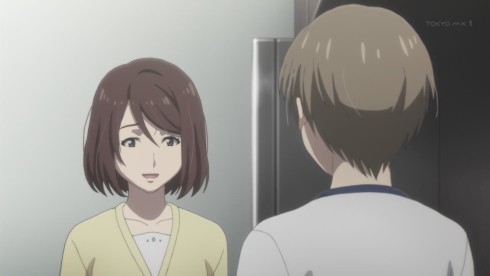 There’s a scene with his mother, and we learn that Shoutarou actually lost his father at a young age, and that kind of explains his maturity and his need to compensate for his age. It seems that Shoutarou has had to become the man of the house from the get go, and that’s led into a youth that’s a bit wiser, and maturer for his age.

Its actually really great to have Shoutarou interact with and befriend Mrs.Fujioka so quickly, and it gives us a further look into the family, and how it is. And it calls back to what exactly Fujioka himself is doing. When the guy excuses himself to go get a cake, he drives up and meets some mysterious individual that we’re not shown in frame. 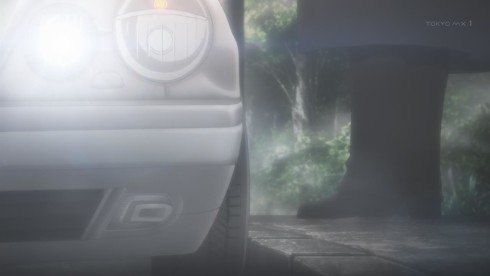 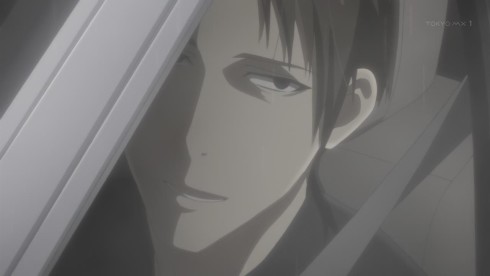 Fujioka’s smirk, and the whole exchange of his with the stranger, about following the stranger’s advice, just hightens the mystery. Just what is going with Fujioka? His passionate outburts to Utsumi, about asking him to take care of his family when he’s gone, actually work because they add to a rather nagging insistence on his part that he’s going to die. Its almost as if the guy WANTS to die, so there’s an odd question there.

Then there’s the cliffhanger that the episode ends at. When Fujioka returns home with his cake, Sakurako grabs him and asks him about a cursed painting. We’ve heard of this painting earlier before, first from Fujioka himself, and then his wife. It seems that the painting itself is cursed too, but what the painting is and how its connected to Sakurako and the mystery at hand… well we’ll have to wait till next week. 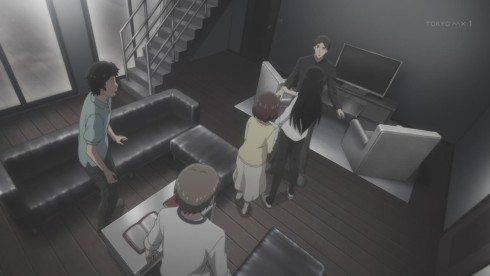 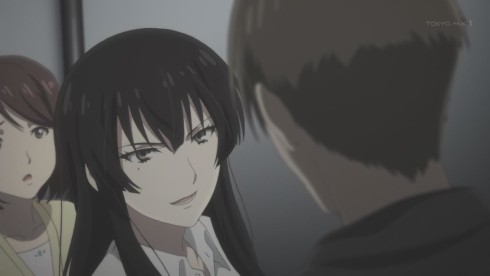 The thing is, I WANT to know. I’m curious, I’m intrigued, both by the mystery itself, but also with the Fujioka family and Hector. Everything about this mystery has the trappings of being just as gripping and interesting as the show’s second episode. I’m excited and impressed because the show gets so many things just… Right. Developing the characters for this arc, with a solid backstory and an interesting situation requires time and careful effort. This week’s episode’s laid down some excellent ground work, so its up to next week’s episode to follow up.

I have a feeling that what we’ll get will be good, and that’s just the kind of note that a mystery show needs to leave off on. Solid stuff!