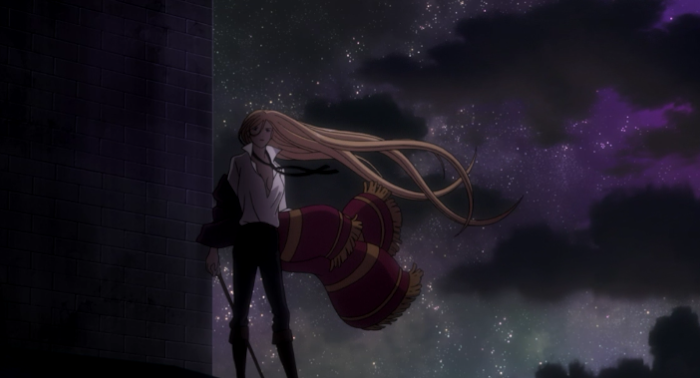 We’ve been heading toward this godly showdown since season one, so it’s no surprise that last week’s kidnapping(s) serve as the spark that finally sets the whole thing ablaze. Yato’s on the warpath, Yukine is right there with him, and Bishamon is only too happy to cash in that Revenge Card she’s been carrying for centuries. Too bad they’re all pointing their weapons at entirely the wrong person.

In terms of action, the centerpiece of the episode is the battle between Bishamon and Yato. The fight looks good because “good-looking BONES anime” is redundant, using a lot of quick cuts from a variety of ranges to create a sense of action via camera movement as well as selective animation. What really makes the scene striking, though, is the work put into the backgrounds: A gorgeous purple-and-black sky alive with stars, mixing the colors of Phantoms with the bright glow of Regalia names.

It’s a palette meant to be beautiful but also a little sickly, and the sense of unease only grows as the clouds roll in, blotting out the light. This is a battle between deities, forces almost as vast and infinite as the night sky above them, and the scenery grants it the gravity it needs as much as the surrounding exposition does. 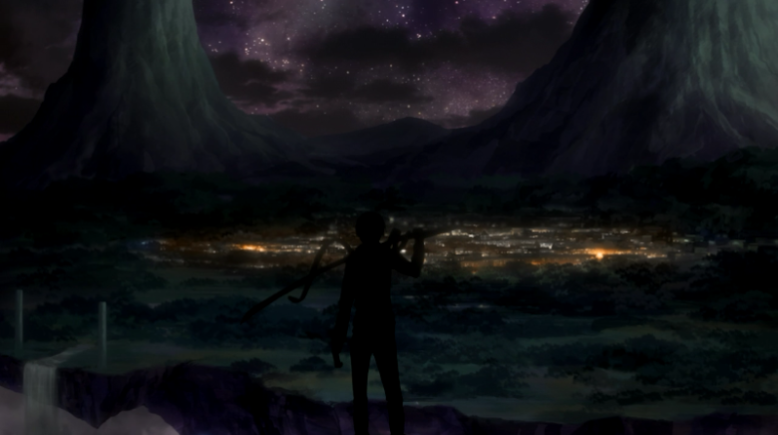 This shot is great and you should feel great.

While the two gods (plus Regalia) duke it out, Kazuma and Hiyori have their own, much less violent discussion. Hiyori’s initial response is to kick the door down (I love this kid so much), but they’re sealed off from the outside world “by a scourge,” so at this point all they can do is share intel and worry about their godly buddies. Along the way, Kazuma works out a theory about what Kuguha’s endgame might be, and at last spells out the story behind Bishamon’s grudge against Yato.

As usual, Noragami‘s reveals are both expected and not, having dropped enough foreshadowing previously to give us a general idea of the truth, but throwing in some specific details that still come as a surprise. The expected part? Yato tore through Bishamon’s previous Regalia retinue to save her from blight. The not-so-expected part? Kazuma, a young and inexperienced Regalia at the time, asked him to do it. Since Bishamon was unwilling to investigate or punish any of her Regalia (insisting that all her “children” were good), the Regalia wound up suspecting and eventually turning on one another. So Kazuma took the responsibility onto his own shoulders, willing to lose his name if it meant saving the god who had put so much faith into him. 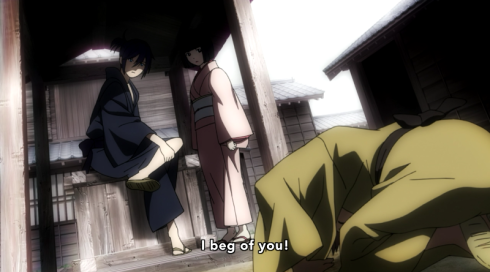 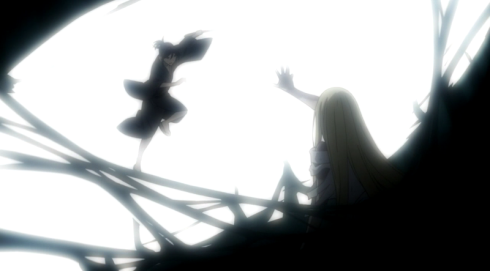 Names, we are more and more discovering, have a tremendous amount of significance and power in the Noraverse. They provide identity, a sense of belonging, and purpose – all of which is true in the real world, too, but here it’s taken a fictional, supernatural step farther. There’s a very solid physicality to them, as they grant the intangible a form, whether that’s the shape of a weapon or of a deity. (Which makes Kazuma’s willingness to lose his all the more meaningful, and really highlights how much he cares about Bishamon.)

They connect gods and Regalia both symbolically (the common syllables, such as the “-ha” Bishamon tags to the end of all her new retinue’s names) as well as literally, since names grant Regalia power but can also be used to bind them the way Kuguha did with Kazuma. Interestingly, names are just as important to the gods as to their servants, tying them to human memory, which in turn gives them their power and a kind of immortality. Bishamon can “die,” but she’ll be reborn with a similar form and personality because of the humans who remember and pray to her. This is, incidentally, Kuguha’s endgame: To kill this Bishamon and slide into the role of right-hand Regalia when the new one comes into being. 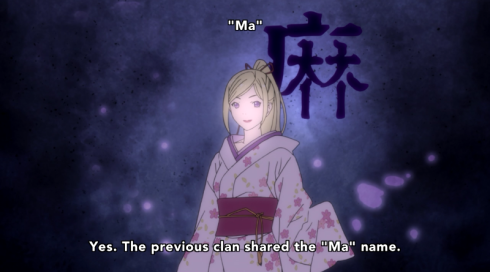 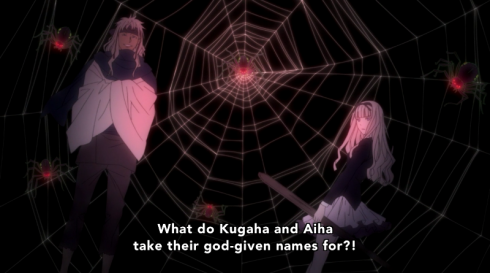 On the other hand, Yato’s existence is much more tenuous, since he doesn’t have a proper godly name or a shrine. All he has are a handful of people who he’s helped, most of whom don’t know he’s a god or won’t remember him for long. So, really, all he has is Hiyori at this point. If Bishamon kills him, the odds of him coming back are next to zero.

What this does, in effect, is create a cyclical power balance between all our various forces. The give-and-take relationship between gods and Regalia has been clear for a long time now—they both rely on each other for protection, but can also destroy each other just as easily—but all this talk of names and memory puts mortal humans in a unique, surprisingly powerful position as well. Humans may be the least supernaturally strong of the bunch, but they’re also the most essential: Without humans to name and pray to the powers on the Far Shore, those powers cannot take shape or develop consciousness. The gods exist because of humans. 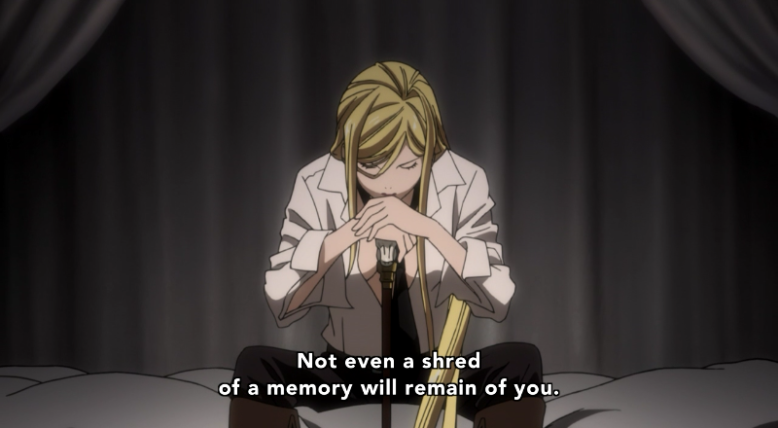 “It’s going to take some time to scrub your name off all those bathroom stalls, but we’ve got eternity and a whole mess of Brillo pads to do it..”

And okay, no, this isn’t the first story I’ve seen/read to suggest that humanity is just as important to the heavens as vice versa, but it’s still a codependency that fascinates me, suggesting that memory and especially belief have as much or even more power than “the powers that be” themselves do.

It also sets Hiyori in a unique position as the only proper human in the cast, and the one tasked with remembering, and thus naming, and thus giving form/life to the deities and spirits around her. When all is said and done, her role in this may prove to be the most vital of all, particularly given that final shocking image of Yukine protecting his master (and friend), just as he said he would, and… 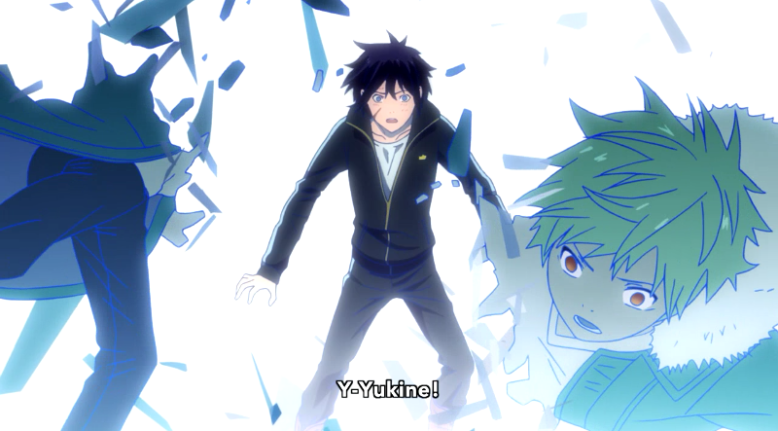 {Insert the voice you hear when reading my posts, then pitch it into a scream and amplify to eleven}

UM. EXCUSE ME. What have I been typing in caps for the past two weeks?! PROTECT YUKINE, that’s what! You had ONE job, Noragami! ONE. FREAKING. JOB.

You better fix this soon, or we will have a situation on our hands. Possibly involving tablets flying out windows. I’m just saying. It could get ugly. 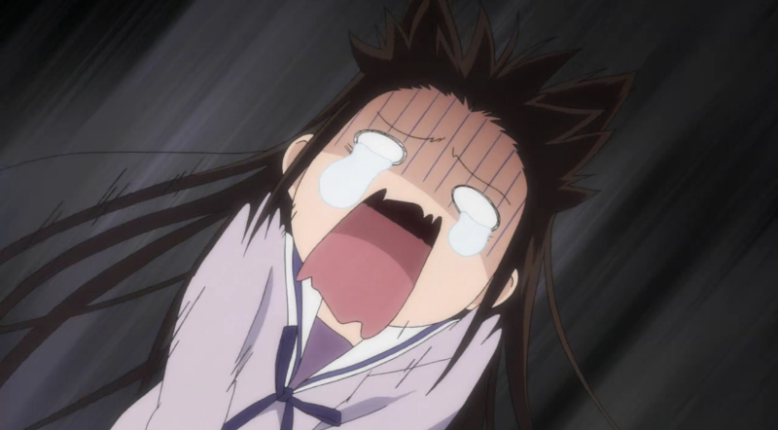