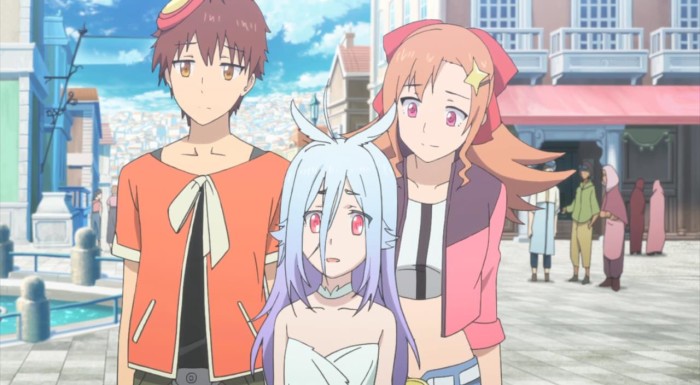 As they say, behind every great hero is an even better villain. Its kind of sad then, that a perfectly solid episode of Comet Lucifer, beautifully animated, full of fun and jaw dropping moments, is ruined by one of the worst antagonists to come out in some time. Its a bit of a misstep for a series this young, but I suppose Comet Lucifer always had potential to derail a bit on something. It IS surprising that the low point of the episode hit us merely three episodes in.

One of the reasons for my liking Comet Lucifer so much is definitely its characters. Sogo, Kaon, and now Moura and Felia are just a joy to watch on screen. The dynamic between the four of them is great, alternating between familial and friendship. There are times when I think it definitely feels like Sogo and Kaon  are like parents, dutifully doting over their would be adopted child Felia. But I think what was equally important and kind of nice to see is that Sogo and Kaon are very much children themselves, and can have fun with Felia and connect with her because they’re still so young. 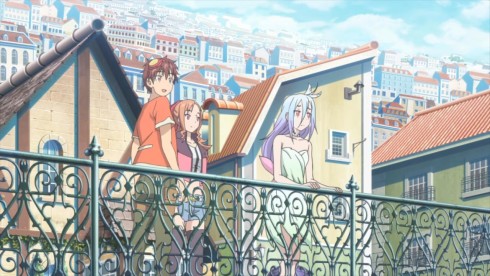 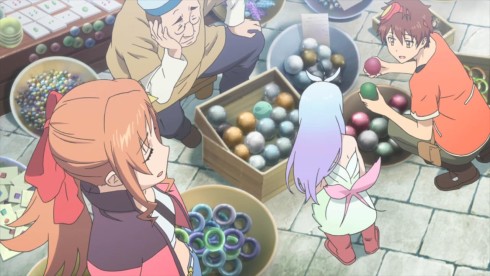 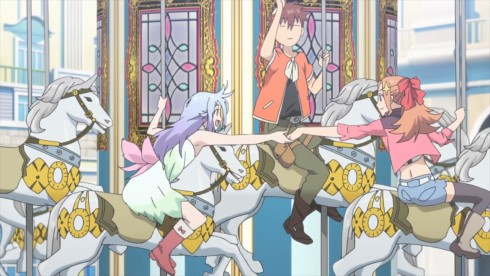 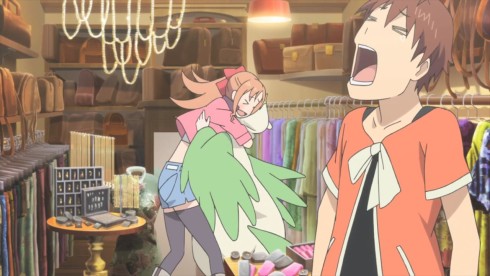 More so than last week, I really felt like Sogo and Kaon acted like an elder brother and sister to Felia, more so than parents. I think this particular dynamic actually works a bit better, as it doesn’t force the two to be older than they really need to be. And its because of how well these four characters play off of one another, and how much chemistry they have as a group, that I think the first half of the episode was undoubtedly so strong and entertaining.

The first half, featured what I think the series needs to double down on as much as possible. There was a calming, relaxing and coy feeling to it all, as Sogo, Kaon, Felia and Moura went around the town and just had fun. Even the little arguments between Sogo and Moura felt very natural and kind of entertaining to watch. Very often, when “boys” (and I’ll call Moura a boy because he very much acts like one) argue with one another, it can be pretty annoying. The Anime medium in particular is home to some really groan worthy moments in this regard. But the bickering that went on between Sogo and Moura felt just right. Moura was just mean enough to Sogo that it feels playful, and Sogo reacted in kind without going overboard either. Its a very “boys will be boys” dynamic, and one that I think really works. 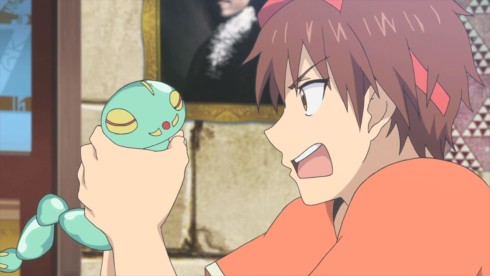 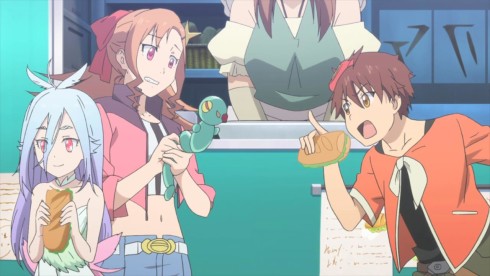 It works, because, at the end of the day, despite their minor squabbles, Sogo and Moura put away their differences and work together when it counts. Beyond just working together though, they also act extremely badass as individuals. Its a unique pairing I think, as Sogo and Moura are destined to be a team simply because of how Moura relies on Sogo’s crest in order to be able to transform. Its great to see the anime go a different route, and not set them as best buds to begin with.

The other side of the group, i.e the girls, is just as great. I confess, I’m really digging Kaon as a character, both in how adorably she acts with Felia, but also in how she clearly has feelings for Sogo. If there’s one element that kind of really worries me, its in the Opening theme this week. In the first and second episodes, I pointed out that I liked the fact that Felia wasn’t a potential love interest for Sogo, and I very much hope that’s still the case. The completely absence of Kaon in the OP, and the repeated shots of Sogo and Felia have me exceedingly worried. Its almost as if the show is backpedaling on one of the major things that I think it does so well. 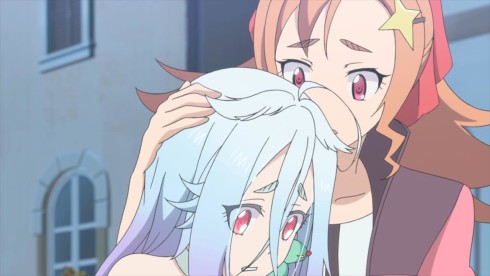 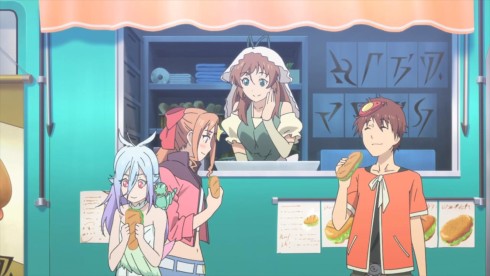 I sincerely hope I’m overreacting here, because the little moment of Kaon being asked if she was on a date with Sogo made me smile. As did every friggin interaction of hers with Felia. As a comforting, warm and compassionate presence, I think Kaon comes off as extremely likable. She’s the older sister that you wish you had, and its because of how naturally she deals with Felia and the young girl’s emotional needs. I’m hoping Kaon doesn’t end up as the sort of character that steps aside smiling because of her affection for Sogo and Felia. Sogo and Felia… Man that sounds so wrong that I think those fears of mine are making me do a double-take here.

The series hasn’t given me a reason to doubt it though, so I think I’ll give it the benefit of the doubt here. Even the little scene with Roman acting like a bit of an idiot again was actually funny rather than obnoxious. But… Since I mentioned the word obnoxious, I suppose its worth mentioning the second half of the episode. 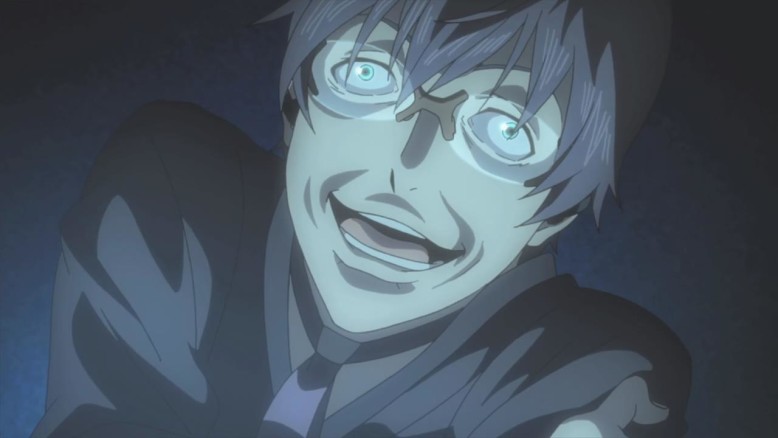 Hide Yo kids… Hide yo wife…. Because Alfried. Seriously… Alfried.

Obnoxious, repugnant and undesirable are the words that I’d use to describe the latest character to make his introduction this week; Alfried Macallan. Its truly rare, at least for me, to encounter a character that’s just so remarkably bad that he actually brings down the overall enjoyment of the episode itself. But Alfried is that bad, and a whole lot more.

There are just too many problems to count when it comes to the guy. He’s exceedingly creepy, even though I’m sure he’s meant to. He, instead, feels excessively flamboyant, odd and stalkerly, and it’s all just so overdone that it becomes annoying rather than anything else. Overdone is the key word here, as everything from Alfried exceedingly creepy facial expressions, to his overly dramatic and overacted lines are just… bad. Its tempting to lame the blame on seiyuu Junji Majima, but I actually think it was more so the direction and the script at fault, rather than the performance. Alfried’s emotional range is just all over the place. 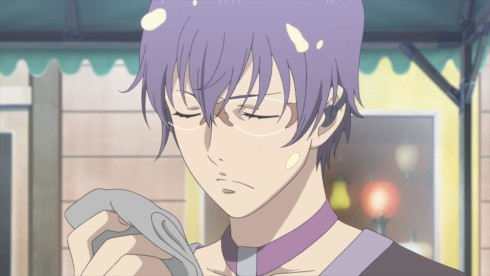 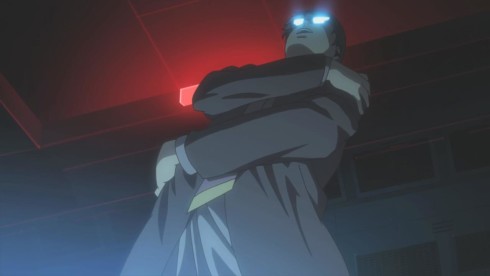 He starts out cool, calm and collected, and then just devolves into utterly crazy and maniacal, and then just goes too over the top after that. His weird stammering of words in “engrish” like mademoiselle and dance and what not, just make it all worse. To add insult to injury, the guys motivations for completely going off the rocker are… never explained.

He’s sees Felia use her powers and that just… sets him off? It makes no lick of sense, and it comes off as simply something that was done to give our young kids something to deal with and conquer. Alfried ends up hacking all the town’s electronic systems, and wrecking havok all in an effort to catch Felia? 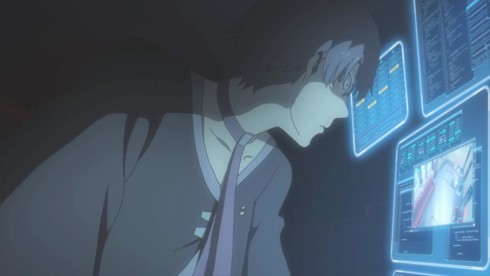 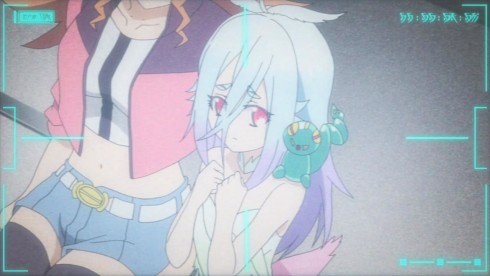 The lolicon, pedophiliac undertones in Alfried’s dialogue aren’t so much undertones as they are bludgeoning strikes. Everything about the guy is jarring, cartoony and so darn odd that its just uncomfortable to watch. Alfried isn’t even the kind of villain that you’d detest, he’s just an exceedingly awkward and creepy individual that just ruins everything with every second of screen time he gets. Given that his whole scheme takes up the latter half of the episode, that’s quite the problem there.

Not even Sogo acting like a compete badass and dealing with Alfried’s hacked Mechs by himself is enough to bring the episode back out of the hole that it falls into. There’s some gorgeously animated moments here, with Sogo using a Hover-Scooter and outmaneuvering Alfried, or Moura’s big transformation scene. 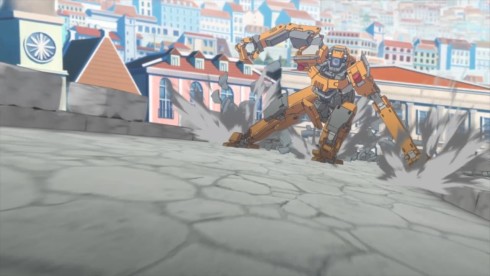 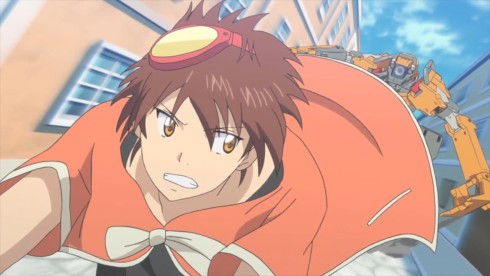 The whole final moment is pretty well planned to. Sogo ends up separating from Kaon and Felia in an effort to draw Alfried’s mech away and tells them to hide. Kaon and Felia end up hiding in a cable car, that of course, Alfried takes control of. And then… Then we have this: 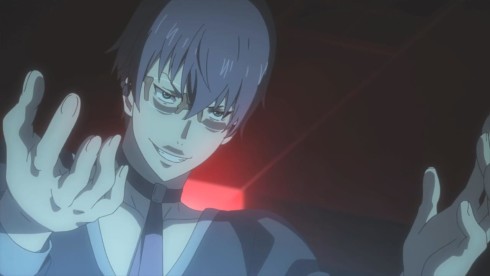 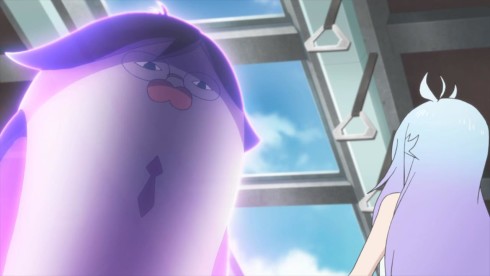 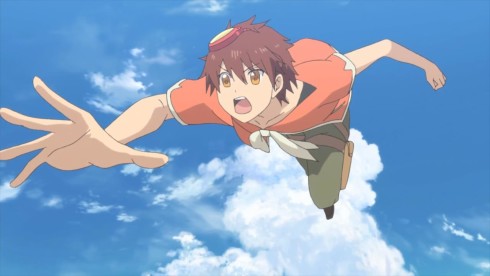 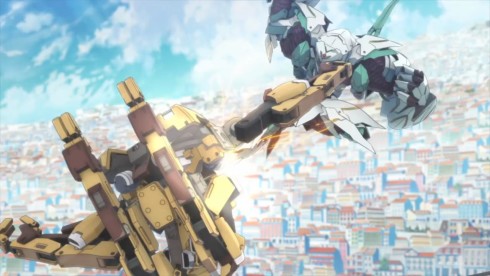 Yeaaah…. The absurdity at that point, the lolicon aspects of Alfried’s personalty, just rain down like a jackhammer. Just… Wow. Its so bad that it almost overshadows the epic moment of Sogo making a leap of faith and Kaon hurling Moura at him, leading to a sweet transformation midair. At the end of the day, Moura and Sogo end up defeating Alfried, and the team enjoys a nice, quiet sunset on top the “Golden Tower”.

Again, the Golden Tower scene, much like the first half of the episode, is so relaxing, so perfect. Its hard to believe that the show devolved into something so cringe-worthy and hard to swallow only moments earlier. My personal suspicion is that Alfried wasn’t quite intended to come off as horribly as he did. The end product ends up, unfortunately, being what it is though. To add insult to injury, this episode doesn’t seem like it’ll be the last we’ll see of the guy, as he gets recruited to join the bad guys team. 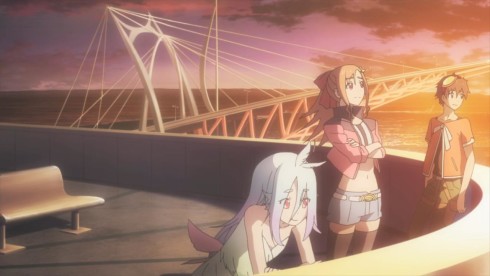 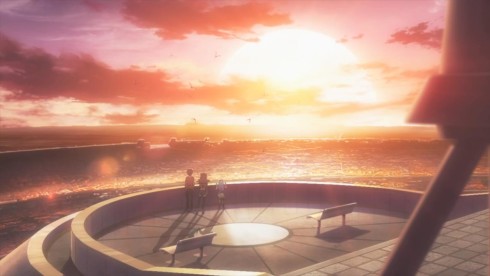 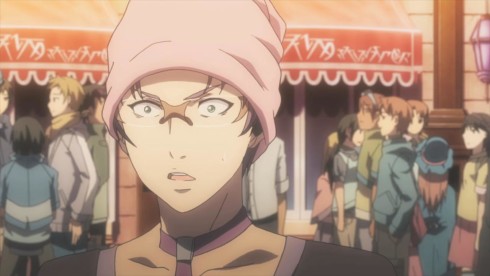 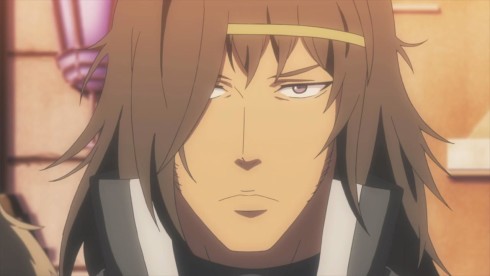 Looking at this episode as a whole, it really did feel like the overall quality came down to the characters. The main characters, Sogo, Kaon, Moura and Felia were and are extremely likable, while the villain of the week Alfried, was so far into the eye-sore category that this episode ended feeling like more of a misstep than it actually was. Having said that though, I do still believe that this is still a series that is beautiful, has interesting characters, unique art direction and is generally engaging.

I just hope to God that this week was an off week, an anomaly. I suppose time will tell if Comet Lucifer can actually balance its nice, calming and relaxing moments with its more thrilling ones. How it uses its antagonists, is going to really play into whether this turns out to be a good show, or a show that could’ve been good.