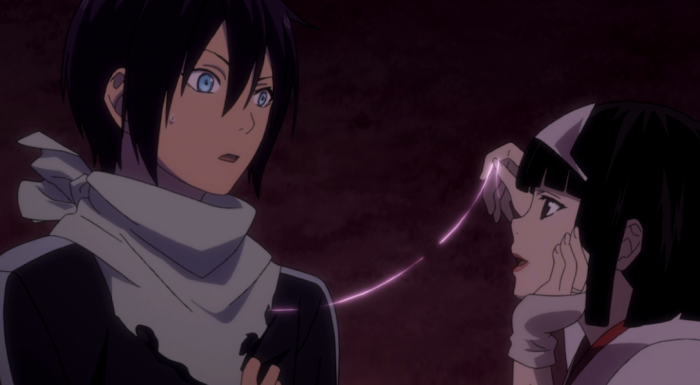 Three episodes in and Noragami shows no signs of slowing down its full-steam-ahead plotting, yet there’s never a moment where things felt rushed or confusing. This is partly thanks to the wise inclusion of short lulls between the conflicts, moments that allow the cast (and audience) to digest and react to the conflict that just took place, but it’s also a testament to the show’s confident, character-driven storytelling style. Events don’t just happen because the plot needs them to—individuals make them happen, interacting with and affecting one another in ways true to their established strengths and flaws alike.

Simply put, this show’s firing on all cylinders right now, and it makes me groan every time the end credits roll and I have to wait another week to see how Bishamon and Yato’s rapidly accelerating crises are going to turn out.

So much went down this week that it’s tempting to just turn this post into a play-by-play recap, but what we really saw here was the seeds Kuguha planted last week bearing fruit in some quiet and very noisy ways. He’s a fascinating and dangerous antagonist, the kind of person who knows how to read others and manipulate them through subtle suggestions and barbed words, essentially getting them to enact their own downfall, and he’s done that with just about everyone at this point. 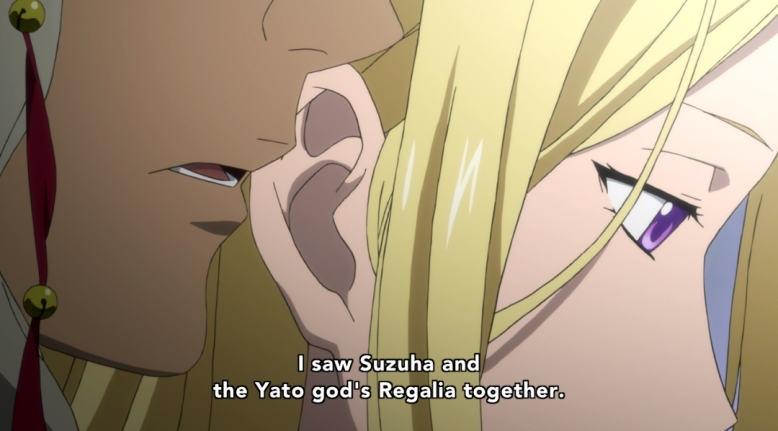 Thanks to Kuguha, Yato is suddenly concerned about his existence and overprotective of Hiyori. He’s focusing too much on preventing future problems rather than handling immediate ones, which in turn makes him less communicative with and emotionally supportive of Yukine, creating minor but worrisome friction between the two. It’s also the reason he runs off and leaves Hiyori behind, so focused on protecting her from Aiha that he doesn’t listen to Hiyori’s warnings or see the trap closing in around them both. Our trio aren’t quite in sync, and that’s dangerous for every one of them. 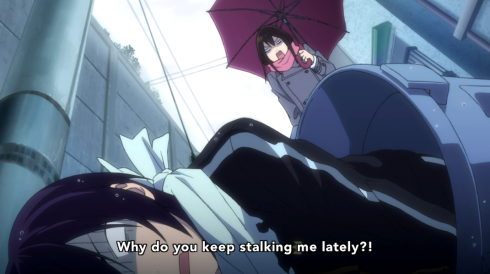 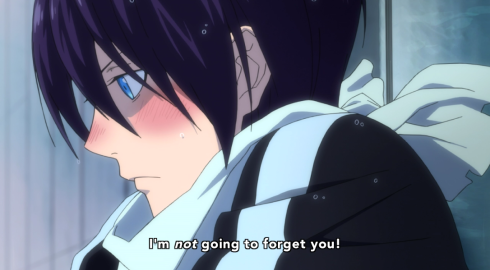 Even so, their bonds aren’t nearly as frayed and irreparable as Nora claims. I confess that, given Yato’s reputation for killing Bishamon’s Regalia coupled with his all-too-vague demands that Yukine stop seeing Suzuha, I was very worried Yukine was going to accuse Yato of killing his friend. And, really, one short story arc ago, I think that’s exactly how this would have gone down.

But our current Yukine never even considers it. These two aren’t working together as closely as they were before Kuguha got into Yato’s head, but there’s still a ton of trust between them, so deeply woven into their characters that it’s easy to take for granted. Yukine never once suspects Yato, and Yato doesn’t worry that Yukine’s grief will turn to blight. Instead, he quietly encourages Yukine to work through his sorrow at his own pace (in stark contrast to the “stop being upset now” mentality present in the Bishamon house), even if that does weaken them both for the time being. That trust keeps things from unraveling too badly this week, and should help the two band together in the coming ones. 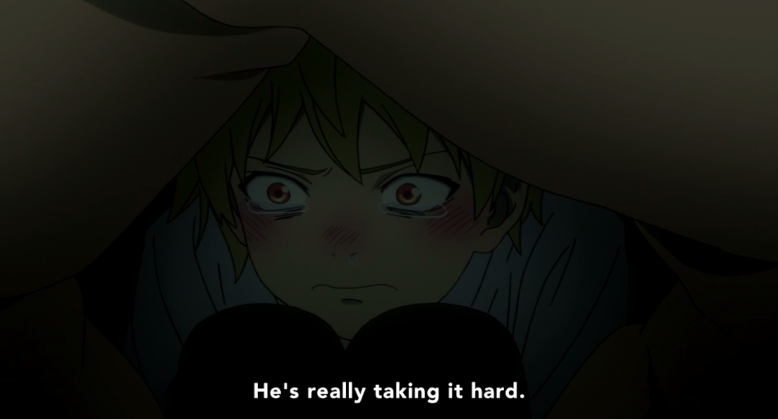 Aaaaand continuing with last week’s I WILL PROTECT YUKINE theme…

On the other hand, Bishamon’s family is falling apart as the few cracks Kuguha chipped last week swiftly expand into full-blown rifts. In a move both unexpected but perfectly true to character, a grief-stricken Yukine drops into Bishamon’s courtyard and starts publicly accusing her of not caring about her Regalia. His accusations are too harsh, yes, but he’s also not wrong when he points out that her family is too large for her to maintain a real relationship with all of them, never mind keeping them from harm (physical or otherwise). And, because she does have such weak bonds with so many of her Regalia, they hear Yukine’s words and start to wonder if he might be right—that Bishamon really doesn’t give a damn about them.

The uncertainty and lack of trust go both ways, mind you. Because her Regalia (Kazuma most of all) have spent so long hiding the truth from her in an attempt to protect her from mental pain, Bishamon doesn’t know how to deal with Kazuma suddenly, passionately telling her she’s wrong about Yato. She can’t quite cut him off entirely, but she does banish him, effectively removing her team’s navigation system both in battle and out of it. Kazuma was the team’s eyes and their leash, focusing their combative abilities in ways that made them protectors instead of destroyers, and losing him has weakened and rattled her entire retinue. 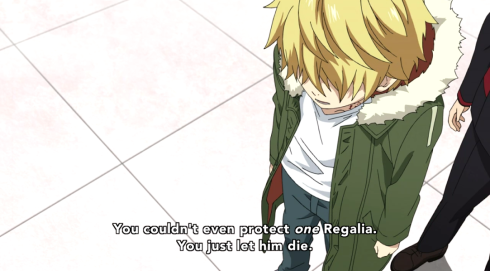 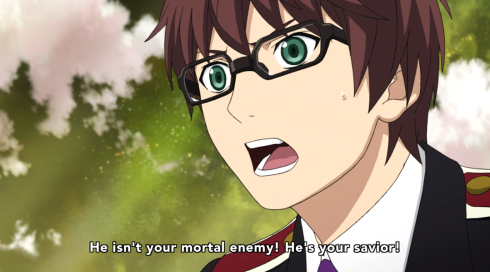 Worse still, rather than see these events and realize they need to be more open in their communications with Bishamon, letting her know when they’re uneasy or disagree with her decisions, her combat team falls under Kuguha’s spell, agreeing they should put “the traitor” Kazuma out of their minds and focus on “protecting their master.” That word “master” strikes me as a vital distinction here, as it suggests a relationship of subservience rather than partnership (something that Yato and Yukine have been moving toward), which also implies certain hierarchical boundaries neither side can cross.  So everyone just keeps bottling up their uncertainties and hiding them from her, and the cracks grow wider by the second. 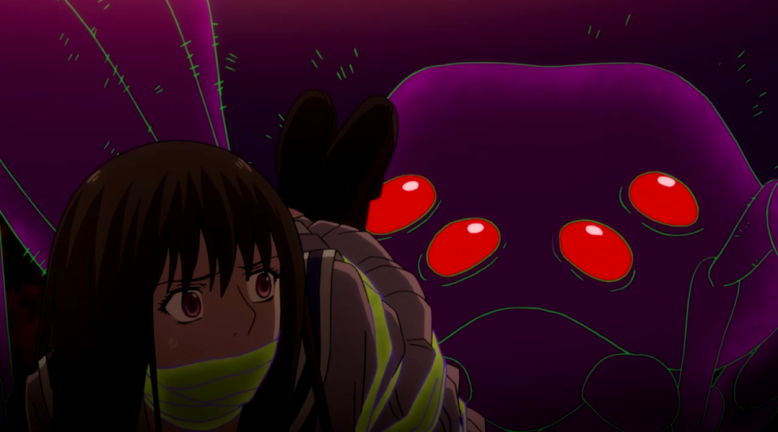 To cap off this week’s not-so-slow spiral into total disaster, Kuguha enlists the aid of Aiha, the blight-riddled goth-loli who’s been stalking Bishamon since the season began. She’s a former Divine Garment recently replaced by Tsuguha, and while the reasons for this change are unknown, it’s clear they were made without Aiha’s approval. She’s desperate to get close to Bishamon again, so she teams up with Kuguha and attacks Yato under the guise of carrying out Bishamon’s will. (Yato, incidentally, is more than willing to play the role of the villain here, even gloating about how he killed “her comrades.” Methinks there’s some residual guilt here, even if Kazuma’s right and Yato did it to save Bishamon from blight.)

And now Hiyori’s gone missing and Yato think it’s on Bishamon’s orders, so… so, yeah. Two emotionally vulnerable gods missing their moral compasses are about to throw down, aren’t they?