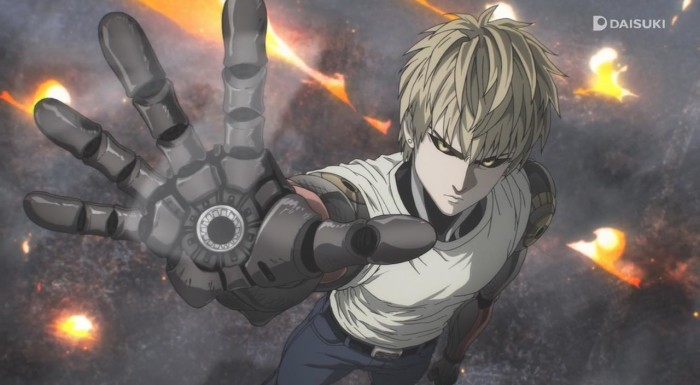 In case you were wondering if last week’s episode was a one time fluke, the second episode of the series is here to put an end to THAT notion. “Will this be a consistently great series?” is the number one question I at least had going into this week’s episode. Thankfully, it seems like another thing that you can count on One-Punch man for is consistency. So… if you liked the  premiere, then episode 2 is more of the same good stuff, this time introducing Genos, who will be most likely be Saitama’s sidekick and quasi-disciple. 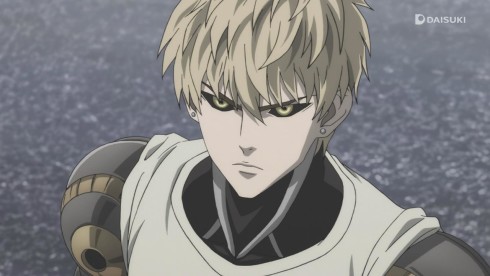 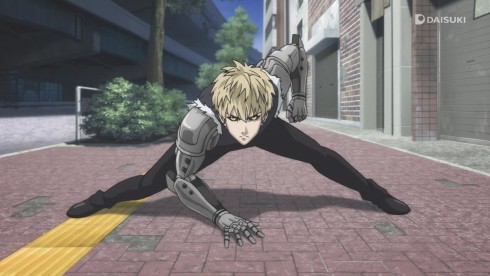 Genos is kind of the highlight of this episode, a 19 year old teenager who became a cyborg in order to avenge his family and fight for justice. I noticed this in the premiere, but its doubly true here in that One-Punch Man calls on a lot of elements from popular shounen battle franchises. We had a purple Picolo villain in the first episode, and Genos’s backstory seems to borrow heavily from Dragon Ball Z and One Piece. Not that that’s bad, as One-Punch Man is also a pretty tongue-in-cheek parody of the shounen genre in general, beyond just a deconstruction of the super hero idea itself.

Genos’s big character quirk is that he likes to talk…. a lot. And I really mean a lot, the guy just doesn’t shut up and constantly goes about saying the same stuff over and over and over again, with a simple, calm and very descriptive voice. Being that Genos’s a cyborg, he’s also got the tact of well…a Robot, and is pretty simple and blunt about everything. The term passive observer would be a great description for how Genos speaks. Its interesting, you’d think there’d be some overlap with Saitama’s bored persona, but what’s interesting is how much Saitama and Genos contrast. 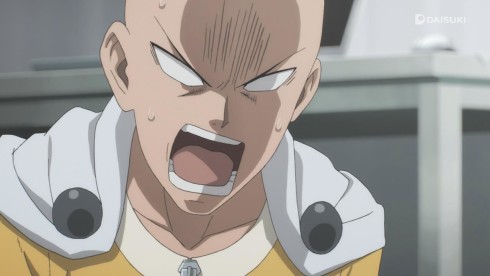 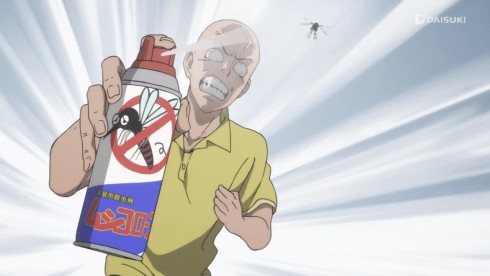 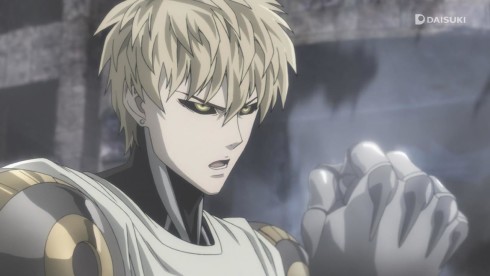 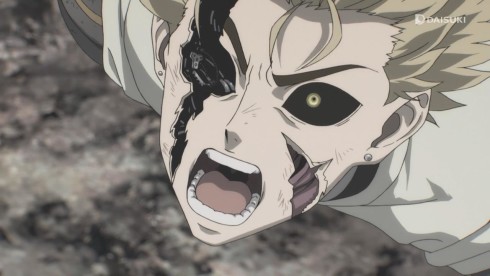 There are aspects of Saitama’s personality that make him more human than the Cyborg that he encounters this week, but then there’s parts that genuinely illicit a surprised response from that very Cyborg. I liked how we got the scene of Saitama struggling with the one Mosquito, while Genos incenerated the entire swarm in one well swoop. The episode goes to great lengths to show how different Saitama and Genos are, and yet how they’re both kind of similar in how inhuman they are. Saitama’s extreme almost god-mode like resilience, coupled with his ability to basically one shot overkill everything definitely feels inhuman, and has Genos impressed, so much so that he asks to be Saitama’s disciple.

Its a weird combination, with basically an inhuman superman hanging out with an impressionable teen cyborg.Then again, everything about One-Punch Man is off quilter, quirky, unique and downright weird. I mean, the first time Genos and Saitama meet, the guy is friggin naked and takes out the enemy that Genos’s been engaging for the past few days. Its funny, anti-climactic and pretty much inline with the funny “that’s it?” moments that the series established in its premiere. 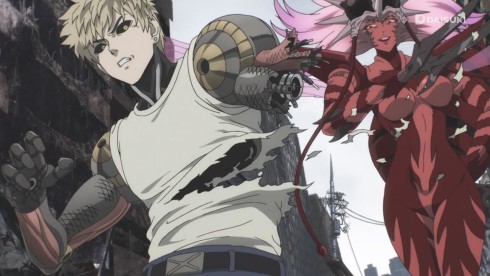 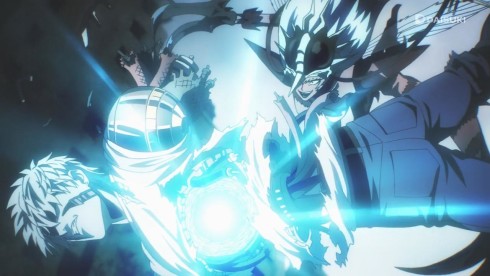 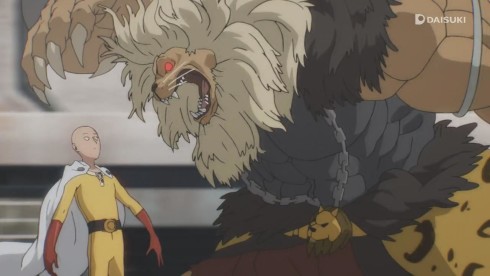 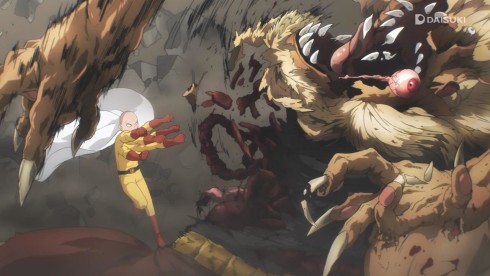 And if you thought that Madhouse had blown all their budget on the first episode, then well, boy were you in for a surprise. Yes, its true that Saitama can pretty much One-Punch everything, which doesn’t make for a great battle, but that’s where every other character comes in. Genos’s battle with the Mosquitto Queen lady thing, for example, was just AMAZING to look at and a joy to behold. If you’re a fan of intense, jaw dropping action battle scenes, then that’s reason enough to keep One-Punch Man in your watching queue for the week.

Much like last week, the battles, the camera angles, the choreography, its just mesmerizing to watch. And unlike say, western entertainment where everything is just collapsing buildings and explosions, the highlight of One-Punch Man is in how amazing and epic the characters look while motion. The Intense descruction and huge explosions are an added bonus XD 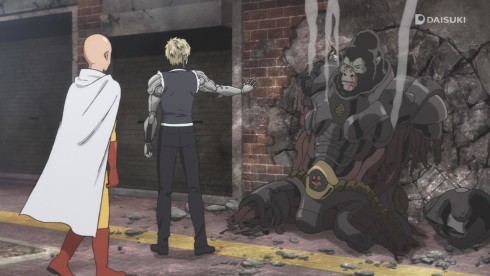 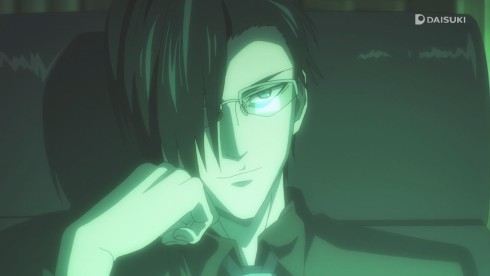 Beyond just the introduction of Genos, this episode served to start up some kind of “plot” for whatever is going to come next, at least for the next week or two. It seems like there’s a “Lab of Evolution” that’s creating some of these monsters that seem to have been terrorizing Saitama’s city this week. The Lab of Evolution seems to be run by an army of clones, based off one black haired guy in a suit with glasses. I’ll admit, the Lab of Evolution stuff didn’t quite amaze me as perhaps Genos’s introduction did.

I’ll also admit to feeling like I got more of the same stuff I saw last week. That isn’t bad per say, its just that I think at some point there will need to be some central conflict, some emotional element to the story that anchors it into the realm of exciting. Last week’s premiere was so powerful because it highlighted Saitama’s misery at being so strong, and had that amazing dream sequence that just sold all his anguish and pain. 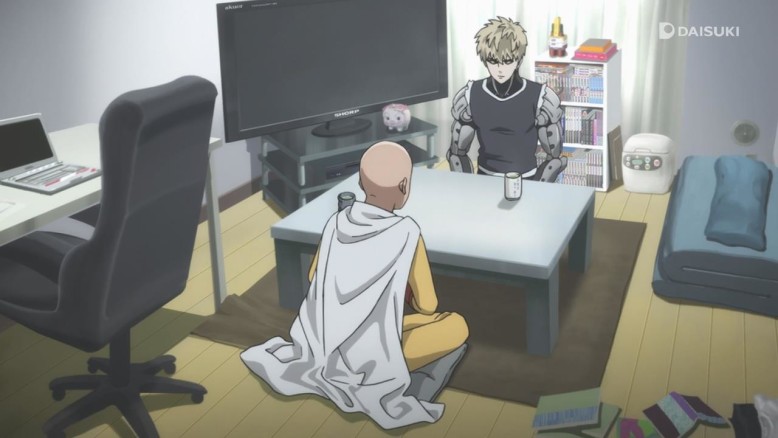 “…And That’s how my Origin Story went Sensei!”

This week didn’t QUITE have that, which is why I’d say it was good, great even, but had a little something missing. It was Genos’s big appearance and introduction though, so it didn’t quite need that emotion so much. It did do the thing that it was meant to, and I can say I’m very intrigued and a fan of the Saitama/Genos combination.

The question on my mind now is whether the show will actually do something truly interesting with this unique premise that it setup in the first episode, or whether we’ll just have a really fun, good looking show that just dishes out the gags and the awesome action sequences each week. Whatever route the show goes down, I’d say it’ll still be a joy to watch. 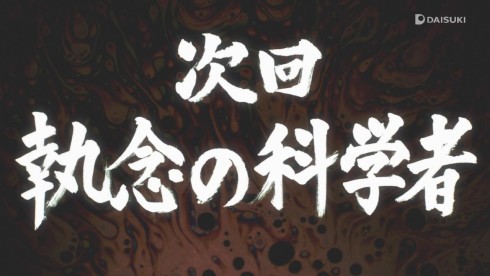 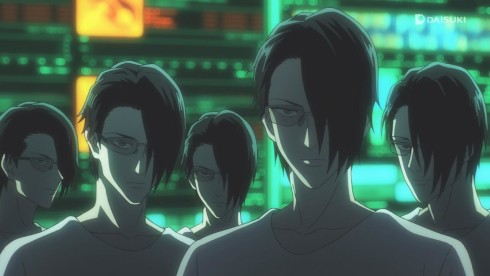 The Human Evolution Lab will take center stage next week. Lets see if this story ends up being a bit more interesting than what we got in this week’s episode.