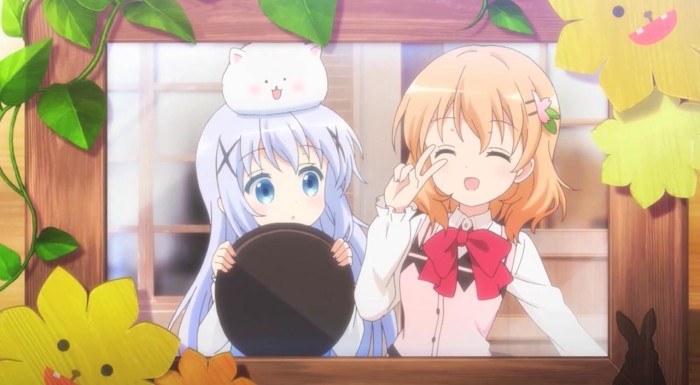 There really are some shows that know exactly what they are and excel for that reason. Gochuumon wa Usagi Desu ka seems to be one of those shows. This is a slice of life show that simply brings everything necessary in order to enjoy this type of series. The summary wasn’t one that caught my eye in terms of the first season. I only ended up watching it later thanks to Flower. The result though was finding a show that truly is an excellent series. The kind of show that can leave you smiling or bring back your mood from a tough day. It has a nice mix of comedy and just being very positive. There are some shows people will call healing series and this really is one of those. So far the second season seems to have perfectly recaptured that magic and brought one of the best first episodes of the season for me. It’d be hard for me to say what could have been done to make it better. 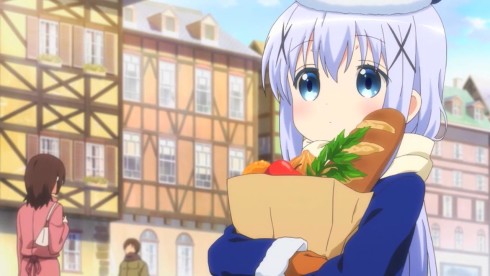 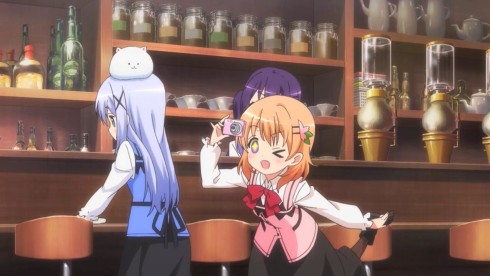 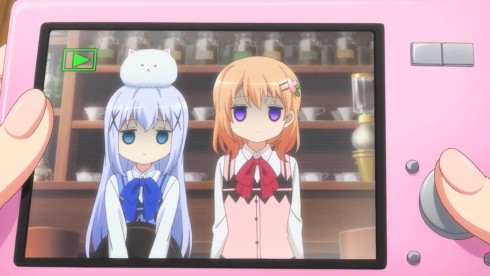 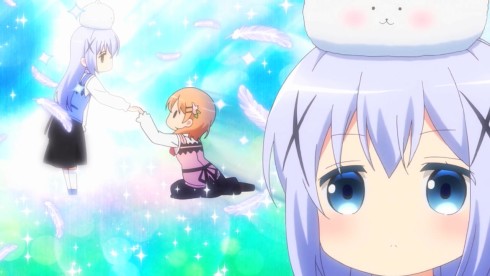 The show hasn’t lost a step as evidenced by the first episode. Moving right into a pretty straight forward story this episode focusing on Cocoa’s pictures for home, magazines, and Chino’s smile. To me the show told its stories pretty effectively this week. It was fun going through the episode seeing the cast interact which really is the core and strength of the show. Everyone was very much who they are in this episode. Cocoa being a bundle of energy going around getting pictures of the town and her friends. Along the way getting into several comedic situations and the jokes really working well in this episode. Just totally obsessed with getting Chino in a picture smiling and seeking advice or help to make that happen. As always she is the obsessed self-proclaimed older sister for Chino and naturally getting a picture of Chino would be the highest of importance for Cocoa as she sends a letter home to her family to update them.

Really the episode kept a nice focus on the cast and how they respond to things. Chino’s reactions in this episode were very much fitting with her character. She started out as a very closed person who wasn’t used to really dealing with people outside of just working at the cafe. While spending a year with Cocoa has done a lot to help her character become more outgoing it’s not a quick process. Asking her to openly smile on cue isn’t easy. It wasn’t like she didn’t want to smile or be able to easily do that. It’s just that it is hard for Chino. She did really struggle with the fact that she does want to smile with the ease that Cocoa can. Even by the end she still is struggling with it, but things worked out fine. That tied into her worries about Rabbit House not being popular as their competitors, though again that was resolved once the magazine did actually come over.

One fair surprise was the fact that we got to see Chino’s mother for the first time ever. It was only a brief flashback snapshot, but it was nice. Certainly interesting that Cocoa praised the picture frame she made in the same way her mother did. 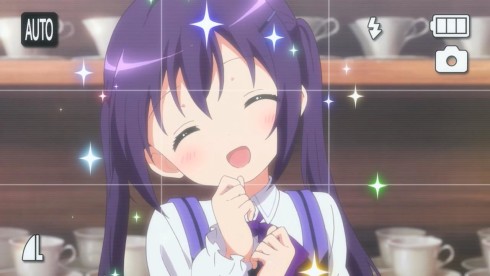 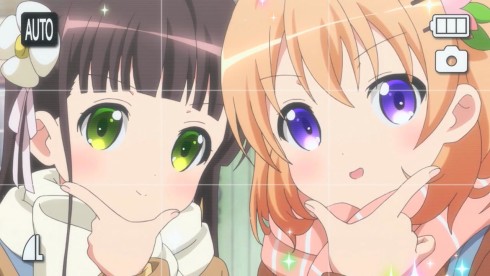 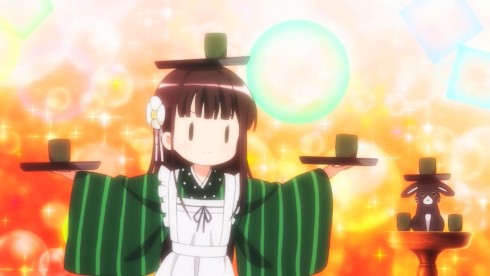 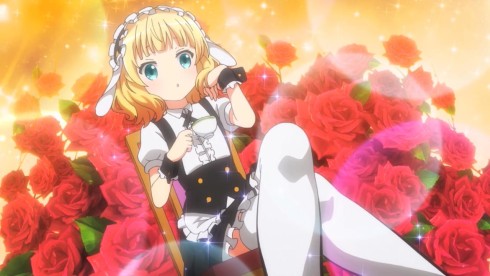 Once again the comedy aspect of the episode just worked really nicely. Most of the scenes with Chiya were pretty hilarious. She and Cocoa are often on the same wavelength easily and happily taking pictures together. The jokes were just solid such as the situation where Cocoa wanted a picture of Chiya working. The over the top pose was out, but Chiya doing something equally odd with the tray balancing was fine because that kind of strange was very much Chiya in a nutshell XD. Or when Cocoa and Chiya pulled Rize into their comedy routine. Rize is a pretty good straight man so that was a smart move on their part. Or how from Cocoa’s point of view the sneer that Chino had on her face was a dazzling smile XD.

Of course Syaro was the same as always as well. She really is well understood as the hard working fairly poor girl, who also has a pretty serious crush on Rize. I did get a good laugh from the scene of Cocoa trying to bribe her into taking Chino’s picture XD. It probably took a great deal of willpower to resist the temptation to take that monetary and photo of Rize in exchange for taking a surprise picture of Chion. A lot of the comedy was with Cocoa and Chino this week, but I’m sure Syaro will get her time in teh sun soon enough. 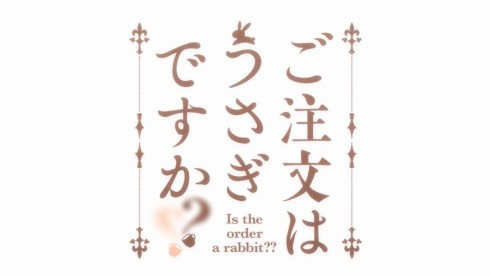 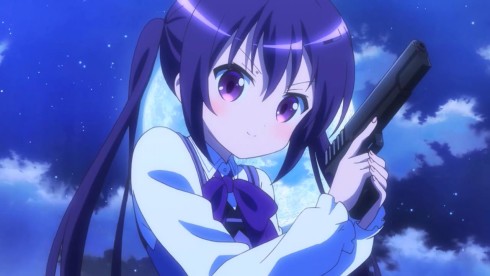 I will say that I think the first season’s OP was one of the better ones of that year. Just a very memorable song and opening that sticks with you. This isn’t quite to that level, though it is still nice. It’s nice having the cast singing the OP song and they do a nice job of it. This one doesn’t quite have the same punch, but it is good. The song is solid and the visuals as always with this show are great. It is such a bright and colourful series and the OP captures that well. Some movement, some still panning shots, but still pretty nice as a whole. 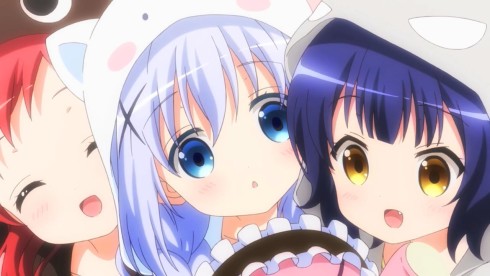 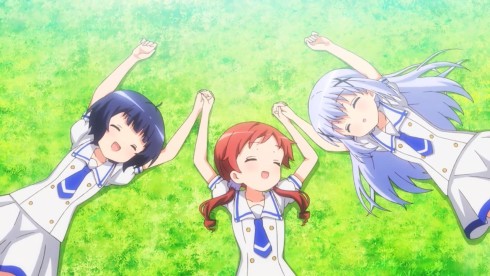 Ok this ED might actually cause casualties. I mean damn, that is probably the most powerful overload of cute you will see in an ED ever. In my mind easily the best ED of the season if not the year. Basically just Megumi, Maya, and Chino singing the ED and just being amazing as they did it. The ED also had a few still panning shots, but also a lot of movement. The trio openly singing the ED in character, spinning around, and just clearly having a lot of fun doing what they were doing. It didn’t hurt either that the song was really good. It had some nice jump to it, was catchy, and I wouldn’t mind hearing it after each episode. For a show that is pretty straight forward like this one, it is an ideal ED. Just very fun, cute, and entertaining. 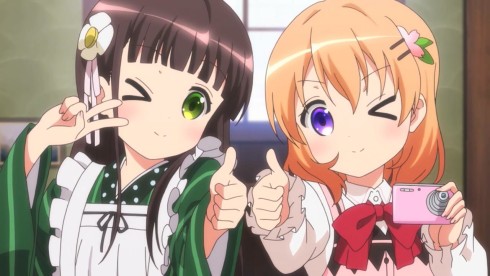 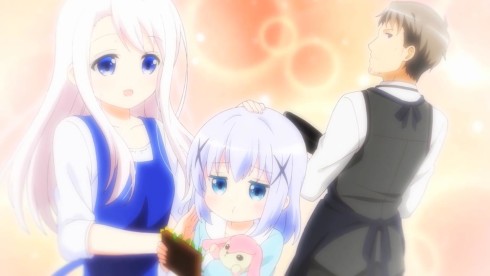 I may not end up covering this for the season, but it did seem only right to get a first look post out there. This is a show that people might just pass on because it looks too cute or the summary, but it is a really enjoyable series. The visuals are great and the characters are really likable. It’s a show I can count on to help pick up my mood because it is fun and just a solid comedy on top of that. I’m sure the rest of the season will be equally good. This show knows what it wants to be and hits the mark perfectly at being just that. It may not be for everyone (nothing really is), but I’ll be enjoying watching this throughout the fall season.
Score: A+