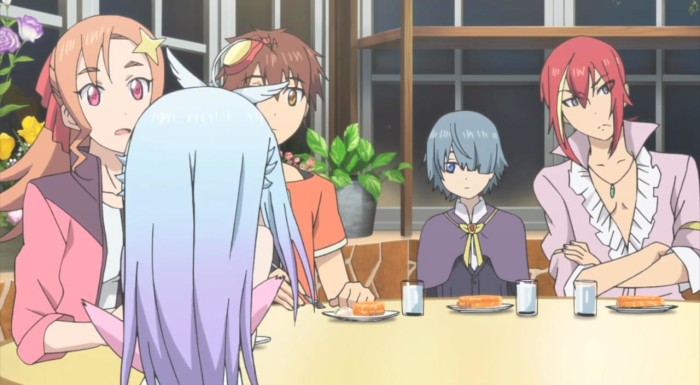 Cliches are a pretty despised thing, and rightfully so but… Comet Lucifer shows us that you can make good use of them, provided they’re used wisely. After a generally likable and strong premiere, episode 2 pretty much picked up exactly where we left off. The show is still very much in setup mode, arranging its various pieces, introducing its characters, prepping its villains e.t.c. and so far, its all good. 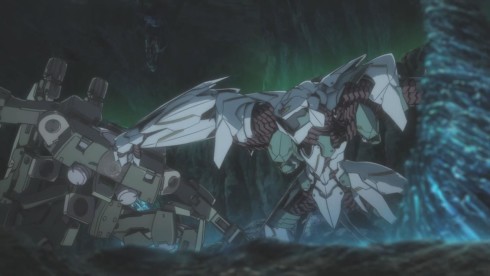 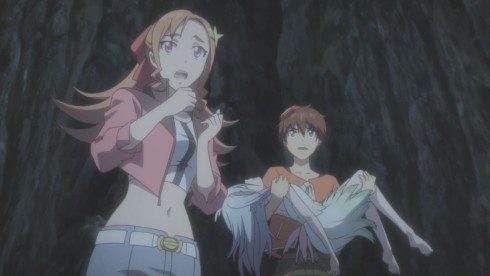 What’s perhaps most astounding about Comet Lucifer is how much I like it despite its seeming lack of originality or really anything unique. There’s a very “going through the motions” nature to this show. Its got the classic Mecha/Young boy and girl meet magical young child formula down, and its very much sticking to it. There’s something to be said about a show that just goes for the standard, predictable stuff and just does it all competently.

This week marks the introduction of both Felia and the Mech/adorable mascot Moura. Felia is very much still a child, and from what little hints Moura gives us about her, she’s pretty much a new born. Its nothing we haven’t seen before, Felia is learning all sorts of new things, and is both happy and adorable while doing it. Whether its Sogo’s name, or aping Kaon’s words and actions at first, she’s slowly but surely starting to learn how to speak and communicate, at a rather rapid rate. 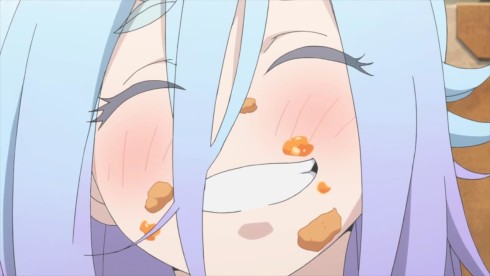 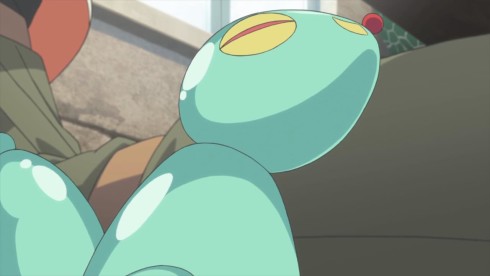 Moura is another interesting character, something that again, we’ve seen before, but if there were one aspect that I’d call semi-original, its him/her/it. Moura is the little bug like rock creature thing that actually transforms into a huge Mecha in order to protect Felia. Its Moura that appeared suddenly in the last episode and saved Sogo, Kaon and Felia. And I’ll revise my previous statement regarding the mechs, because Moura’s Mecha form, given proper lighting, is actually pretty decent looking. Its got elements from his smaller, chibi form, and that kind of bug like look is something that I don’t think we’ve seen before.

Plus having the mascot character also kind of be the big ass cool mecha that the main character will eventually pilot is new, at the very least. We’ve seen variations of it here and there, but its a nice little twist, one that you’ll see coming way earlier than the end of the episode, where it’s revealed. 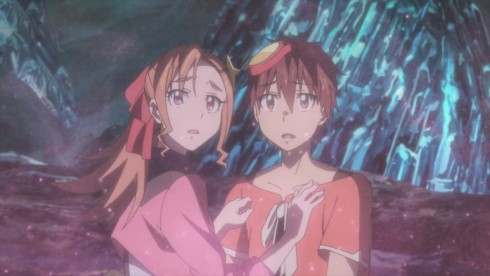 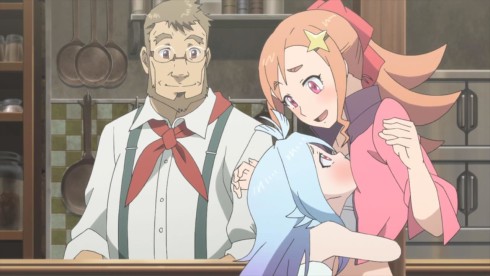 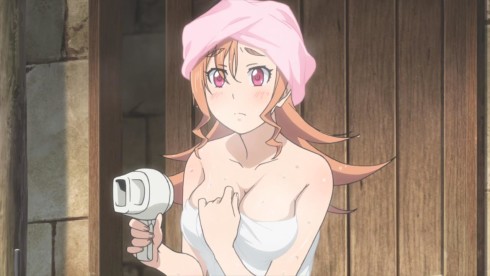 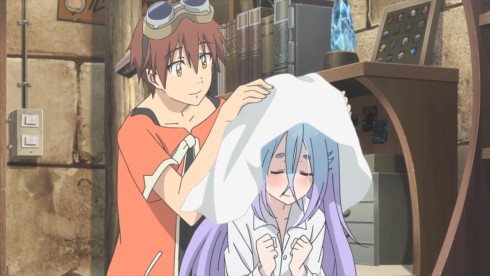 Beyond that, I mentioned Kaon and Sogo’s relationship last week, and how I was totally digging them as a potential couple. I’m happy to see that that still very much seems to be what the series is going for. Thankfully Felia is NOT a potential love interest for Sogo, but actually a child that He and his entire group of friends are raising together. Its especially great to see Kaon kind of handle the motherly duties of raising Felia, and its great to see that its her that Felia takes to the most.

Its also kind of refreshing to see how atypical Kaon is, considering the little undertones of tsundere in her personality. If you’ve been keeping up with the fall 2015 season at large, its all about tsundere girls that seem to beat up the main character because he sees them changing or what not. Its a trope that Comet Lucifer thankfully avoids, though, and I cannot help but state how happy I was to see Kaon chase after Felia, enter the room covered in a towel, and not freak out at Sogo for simply being there. If anything, it shows how normal and comfortable the two are around each other. 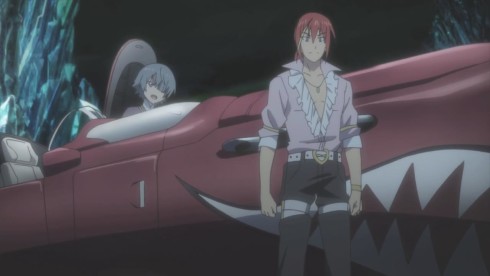 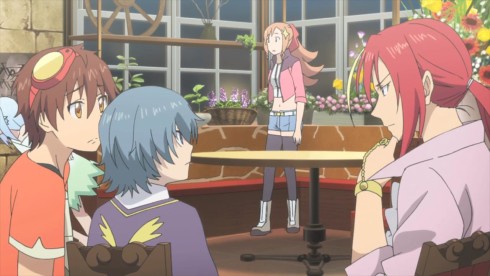 But of course, again, this is something we’ve seen before, in a lot of series, so its not entirely new per say. The one tweak to this formulla is Roman. If you forgot who he is, he’s the red haired dude with the frilly shirt that’s “betrothed” to Kaon. The premiere gave  a horribly bad first impression of the guy, so it was nice to see it kind of dial back his crazyness and show him to be a fairly nice and capable individual.

I think having Roman and his assistant dude save Sogo and the two girls in the cave was a great first step, but what really impressed me was what he did after. After the kids came back from the cave, it was Roman who pretty much directed and handled all the decision making. It makes a lot of sense, since he seems to be the oldest of the bunch, and for once, he acted pretty calmly and maturely in the situation. His idea to hide Felia identity, to have her stay with Sogo, and have Kaon hang around was all impressive. He even threw the wedding to the way side, all so they could deal with the current situation in front of them. Color me impressed, and liking the guy a hell of a lot more. 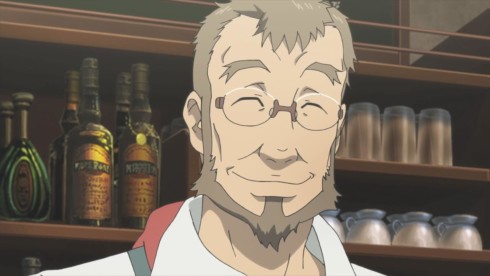 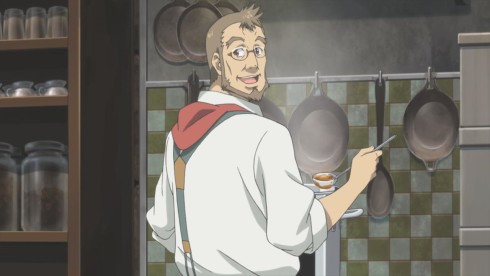 And speaking of likable characters, The guy who’s currently caring for Sogo? Do Mon? What a nice man! I mean seriously, not only is he not angry at Sogo for being gone all day, but he serves all the kids delicious desert, and then also is totally cool with taking in two guests, for God knows how long. He’s also a killer cook/restaurant owner, with some really mouth watering dishes there. Often in shows like these, the adults actually kind of either don’t exist, or create more problems then solutions. Its nice to see a responsible, nice and kind adult being depicted in anime. They really are few and far between, and Do Mon’s presence adds something nice to the general dynamic of the show.

While our heroes are busy getting acquainted with Felia and Moura, the villains begin to amp up their own ranks. It seems the main soldier on the “enemy’s” side is a man named Gus. Gus has already taken on Moura, in the start of the episode no less, and lost. Of course, Gus was piloting a fairly standard mecha, and its later on in the episode that he gets a true, special unit made just for him. Said Mech is given to him by an od dude with a weird V shaped Uni-brow named Master ZoneBoyle (yep…), who seems to be the man behind what I’d assume are the bad guys. 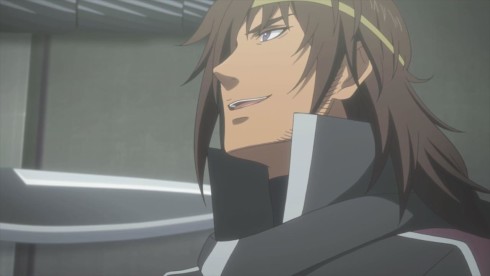 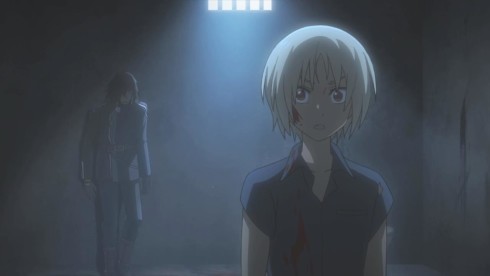 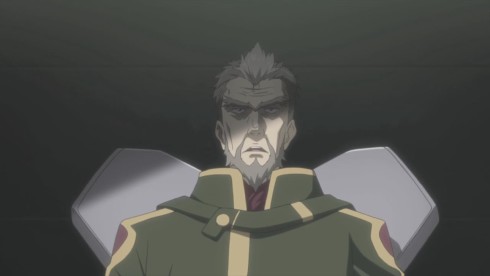 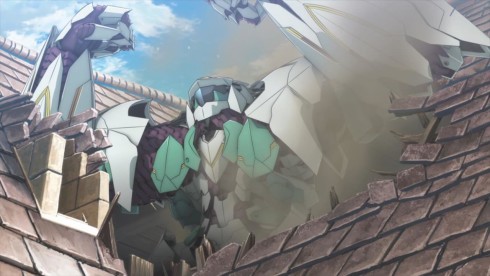 So Master ZoneBoyle (Heh…) ends up powering up Gus, and Gus agrees to use the mecha for whatever nefarious purposes, But… Only if he gets to choose his own men. This leads to the introduction of another crazy character, a young boy named Pack. Pack, beyond being a bit crazy and bloodthirsty, can apparently clench his muscles and remove both bullets and stop bleeding. He’s also notoriously fast and strong, but is still nonetheless weaker than Gus. Gus and Pack seem to know each other, so it seems like the villain team is forming pretty nicely.

Overall, two episodes in and I can say I really like this show. Its nothing special or really original, but its still fun to watch and enjoy. The characters are all interesting, even the basic premise and plot is not In the end, as some who prefers character driven entertainment, a show like Comet Lucifer definitely appeals to me personally. The nice, colorful art style, decent mecha battles, and intriguing interpersonal relationships do help. I think if you go into Comet Lucifer without any big expectations, its a fun ride, and one that’ll be both fun to watch, and equally fun to blog. 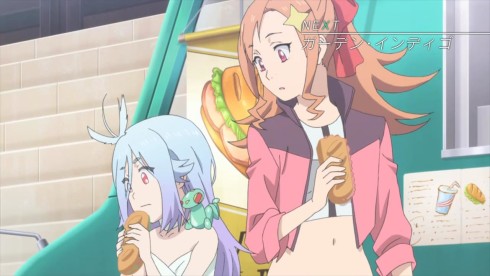 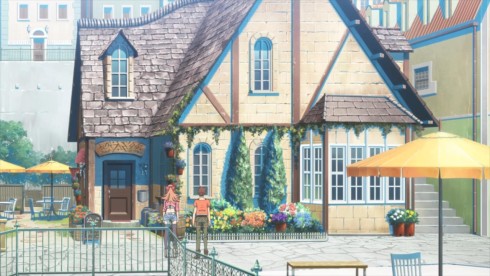 Next week will involve everyone coming to grips with Moura’s true nature I’m sure, and more Kaon Felia bonding. Sounds like a fantastic time!