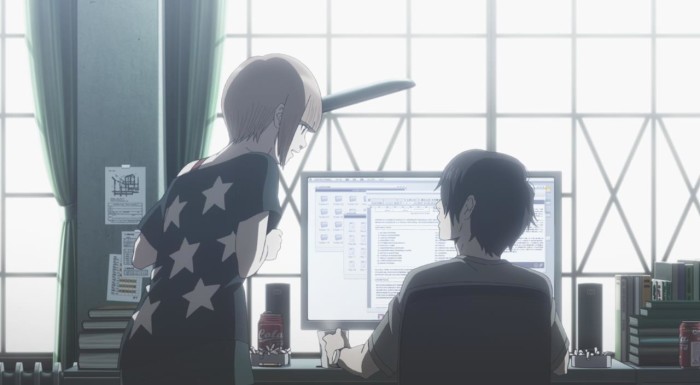 Its been a long time since I’ve so thoroughly enjoyed being a passive viewer of an anime episode. Generally speaking, the last thing a piece of entertainment wants to do is make you feel like you’re a passive observer, detached and kind of just watching things unfold on screen. Yet, if I were to describe the experience of watching Subete ga F ni Naru (The Perfect Insider), that’s exactly how I’d putt it, while also of course, mentioning that I had a great time doing it. That may be surprising but that’s just the kind of show that Subete ga F ni Naru is; the normal rules simply don’t apply. 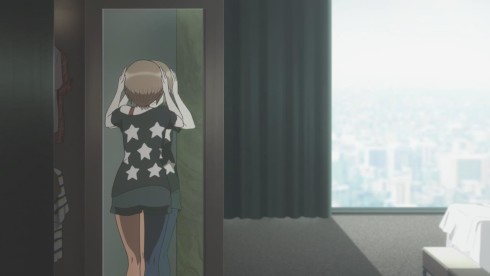 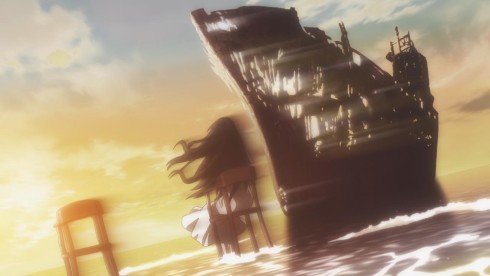 I think my favorite part of the episode is how everything feels very much “considered”. There’s a sense of pretentious philosophy that permeates through all the dialogue, the narration and in how the characters act and behave, accompanied by a sort of tongue in cheek playfulness. To me, it really seems like the writing for this show is both taking itself seriously, and yet not.

The characters in this show ask the standard questions that revolve around the meaning of existence and life, the degradation of intellect, who we are versus who we’ll become, where we’ll end up e.t.c. It all sounds pretentious and melodramatic, to the point where there’s an off kilter feeling to most of the dialogue. Yet, its this off kilter discussion that pretty much takes over most of the episode, that really makes the characters take a very eccentric and I daresay charismatic nature. 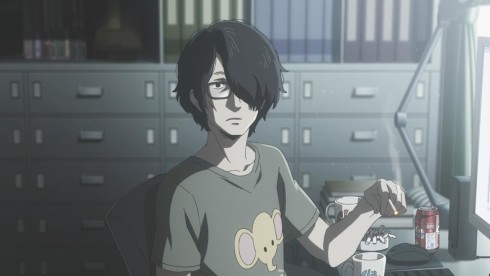 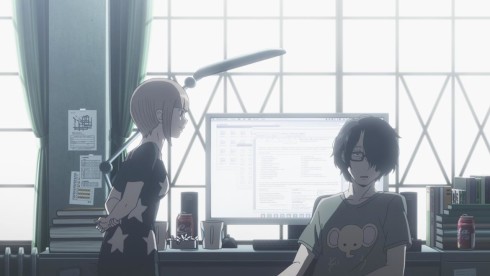 Souhei Saikawa is presented to us an eccentric academic, a genius, a nerd and one that really does live in his own little world. He’s not someone I’ve ever seen before, yet I can imagine it, I can believe that a person like him probably exists somewhere. I can also believe that a rich girl like Moe Nishinosono would run into him, be enamored by his odd qualities and genius and be attracted to him. Its not exactly realistic per say, but these characters are fascinating in how much they really scream the word “character” from their very being.

Its kind of mesmerizing actually, seeing Nishinosono kind of dress in the odd way that she does, drive a sports car, and then go into this old dingy office to meet up with professor that she’s got a thing for. All that happens really, is some philosophical banter, the kind that equally feels odd but is still intriguing to watch unfold. In a way, this feels a lot like what Bakemonogatari was aspiring to be, before it devolved into the weird fanservicey show that it is now. 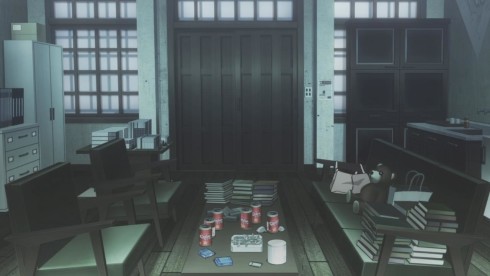 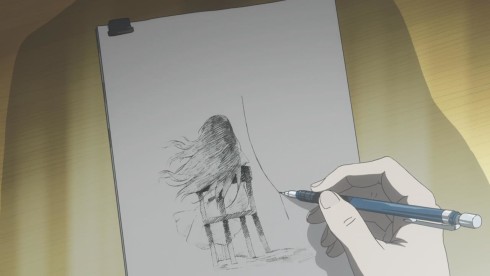 But intriguingly odd characters and weird dialogue isn’t all that this show has going for it, the art direction, the color tones, and the even the characters themselves scream of something that would resemble contemporary cyberpunk. Its been interesting to see literature, fiction and media in general play with the idea of cyberpunk, dial some of its more extreme qualities back a bit, and mold it into something that fits more in the modern day as opposed to the far future.

This year western television had an interesting series in Mr.Robot, which played with a similar idea of Cyberpunk and how it would feel and read in today’s world. Subete ga F ni Naru feels like another attempt to interpret cyber punk into the modern day. For fans of science fiction and cyber punk, its really kind of interesting to see how exceptional this all feels, and how much potential there is for a new kind of genre of literature to pop up. 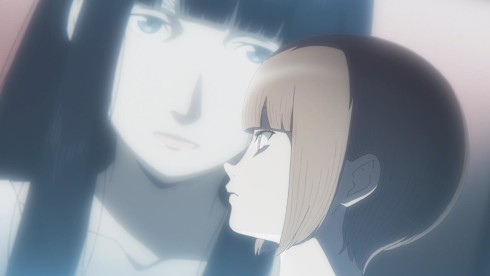 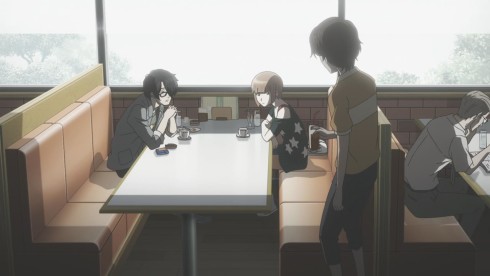 Of course, what sets Subete ga F ni Naru apart from general cyber punk or science fiction is that its also hinting at being a murder mystery. The third major character run into besides Nishinosono and Saikawa is none other than Dr.Magata Shiki. Shiki was apparently a prodigy from a young age, and is reverred by intellectuals and talented academics like Saika was being one of the few worthy of term “genius”. Yet despite getting her doctorate in her teens, Shiki seems to also have been involved and nearly implicated in the murder of her own parents.

What the first episode also establishes, is a weird sense of fascination between Shiki, Saikawa and Nishonsono. The three of them are deeply interested in one another, and its clear that whatever the story ends up being, it’ll revolve around the three of them. Shiki claims that her parents were killed by a “doll” when she meets with Nishonsono. Nishonsono being rich and well connected, is one of the few able to actually get in contact with Shiki after all. And of course, Saikawa’s just enamored with the very idea of meeting the genius known as Magata Shiki, so naturally the first episode ends up with the two of them and two other characters planning an academic trip to the Island where Magata’s Lab is. 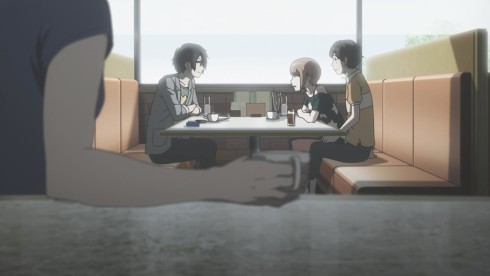 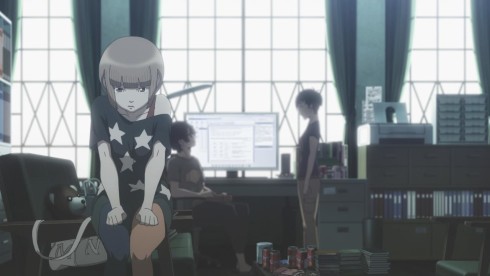 Its worth discussing that not a lot actually happens in the episode per say, beyond a bunch of characters talking, but the dialogue, the shot choreography, everything is just layered with subtitles and subtext, some apparent and some that I’m sure we’ll call back to later down the line. Or at least, that’s the impression I get.

The impression I get from  Subete ga F ni Naru is that its trying to be something more than just a cyberpunk murder mystery or your standard philosophical science fiction anime series. The attempt is pretty noble, its fresh and most importantly it feels genuinely different and original. 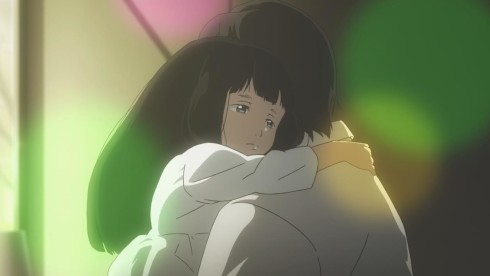 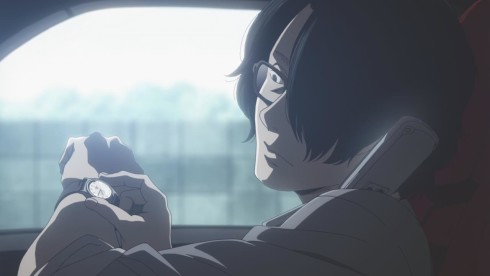 Is it riveting television that makes me crave the next episode? Not really. I think questions like that, about whether this is a show that’s supposedly “good” or “bad” are entirely missing the point of what this episode is trying to show. Its very cheekily trying to get the audience to question everything, the point or the purpose. And I believe that, at least with its first episode, its succeeded.

I’m generally not a fan of shows that pander and try to act like they’re all philosophical and smarter than they really are. Series like Serial Experiments Lain, the Ghost in the Shell Movies e.t.c have never really impressed me with their psuedo intellectualism. That’s not meant as an attack on those series or movies, because they have a place and a space that they occupy, but what I’m trying to get at is that  Subete ga F ni Naru is in a completely different, new space. Its somewhere between that psudeo intellectual stuff and something more quiet, contemplative and interesting like say… Steins;Gate. 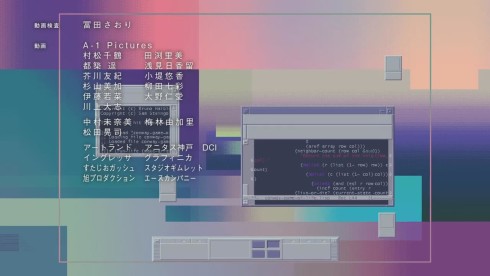 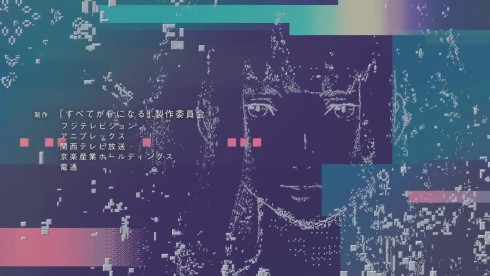 For me, that’s something truly interesting and remarkable. Watching  Subete ga F ni Naru’s first episode was very much an experience, an experience that is walking the fine line between pretentious philosophical drivel and quirky characters doing eccentric things. Because its riding that fine line, its actually quite possible for this series to derail rather quickly. Time will tell if it keeps itself firmly grounded in the unique space that its carved out for itself.

Things like a stellar ED theme that any programmer will smile at, interesting characters and looming mystery give me a lot of hope. Its also the kind of unique material that the whole noitamina A initiative was supposed to create, so I’m glad to see that actually come to pass quite a few years down the line. It didn’t quite blow me away, but then again, I doubt it was supposed to. Lets see how this shakes down in another two episodes, shall we?