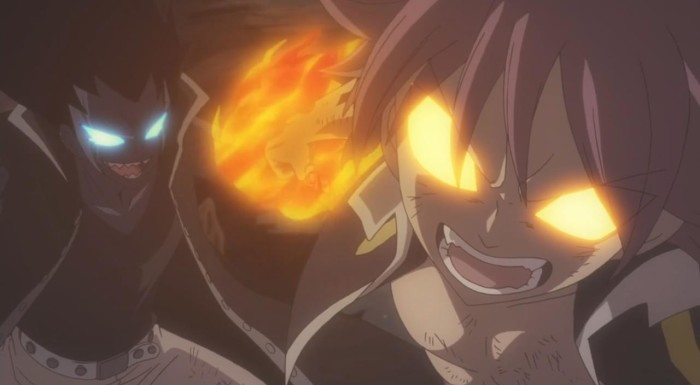 The stretching out of events was so intense this week that I’d say this episode could give Reed Richards a run for his money. Heh… All jokes aside, my heart does go out to the animation staff with regards to the huge challenge they have on their hands right now. Its been proven time and time again that this latest Tartaros Arc is elevating Fairy Tail to a new level of awesome. With each ambitious set piece, battle or setup that this arc has though, I can only imagine the sweat and tears that pile up for those bringing this all to life in animated form. 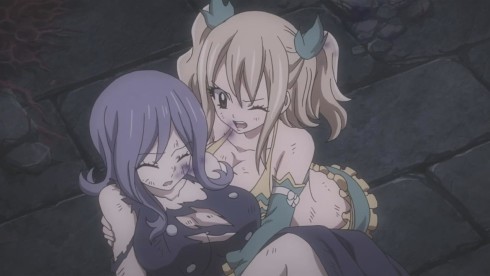 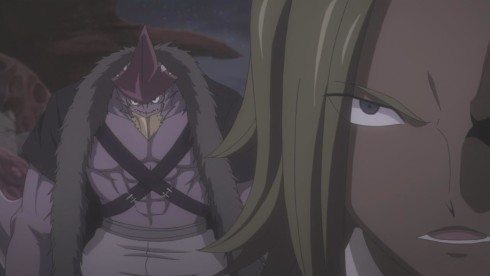 Logically, I realize that there’s some padding and budget saving needed, especially with how many intense and awesome moments continue to pile up, one after the other. Understanding that, and letting 10 minutes of filler go through the episode is another thing though. And quite honestly, until the 11 minute mark, this episode doesn’t quite get under way, which is unfortunate to say the least. There’s a good chunk of time between the moment where Juvia loses consciousness and the Gajeel/Natsu combo battle gets underway.

The problem is that almost all the stuff in-between the episode is almost completely unnecessary. I won’t pretend to know which parts were taken from the manga and which weren’t, but I can tell you that  when animated, those scenes felt like a waste of time and resources. Lets take the battle between Sting/Rogue and Mard Geer. There’s little to no progress on this front, as the enemies just continue to trade blows and jeer at one another. Yet, its decently well animated, and I really do wonder if it was worth spending time or money on those particular scenes. 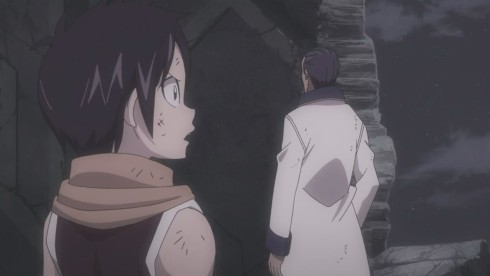 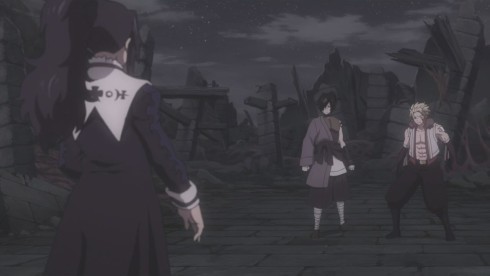 But the real insult, is all the moments of people just screaming and looking for other people or things. I’m not opposed to checking in on certain characters, but if we do, they should be doing something more interesting than just screaming for their friends while blindly moving around. That’s exactly what Cana, Romeo and the rest end up doing though, and its a pointless waste of time.

And of course, the ironic moments of Franmalth, Erza, Minerva and Exceeds wasting screen time continue to invade the episode. It wasn’t cute the first time, and it isn’t cute now. I honestly don’t want to see Franmalth, Erza or Minerva again for a good while after this episode. You know its clearly a stall for time when Minerva’s being shown totally out of character in a maid outfit cooking. 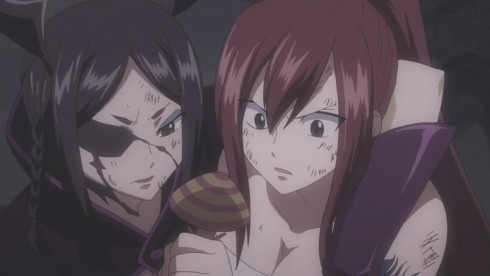 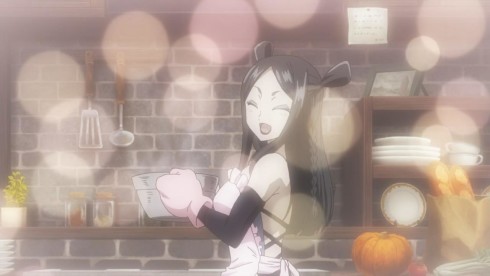 So yes, the first 11 minutes or so of the episode were pretty dismal, minus of course the start. The start of the episode was actually pretty compelling. Juvia collapses after her big battle with Keyes, mostly due to ingesting too many anti-magic particles. Once we pick back up on that front, things get so darn good that its almost easy to forget that the show just wasted 11 minutes of the audience’s time on filler… almost.

Natsu and get Gajeel get “serious”, and man is it just COOL to see. Gajeel in Shadow Iron Dragon Mode and Natsu in Fire Lighting Dragon Mode? If you didn’t get chills from that scene then I really do wonder if you’re human. I got the chills, the thrills and had a huge wide grin spread over my face as Natsu and Gajeel just went to town on their opponents. 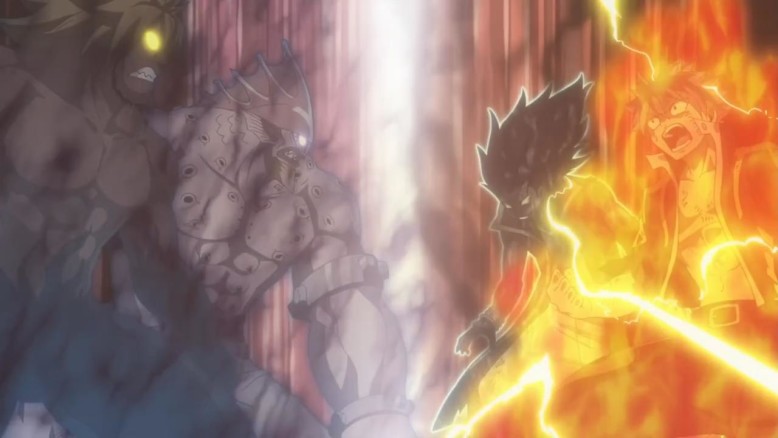 I’m actually legitimately not sure who seemed cooler, Natsu or Gajeel? I’m almost tempted to give it to Gajeel for how cool and downright powerful his Shadow Iron form is. Natsu and Gajeel simply beating their opponents there would’ve been the most anti-climactic battle ever (And waaay too easy), so leave it to the two of them to be their own worst enemies in this case.

I’ll admit, there’s a part of me that’s a bit disappointed in how bad their teamwork is, and how they basically screw themselves with fighting against one another when they’ve got two fairly powerful enemies in front of them. Another part of me kind of understands, and almost respects Mashima-sensei for keeping them in character. Beyond just preventing the fight from ending too quickly, it establishes that no matter how powerful our Dragon Slayer duo is, overconfidence and a lack of teamwork can very well be their undoing. 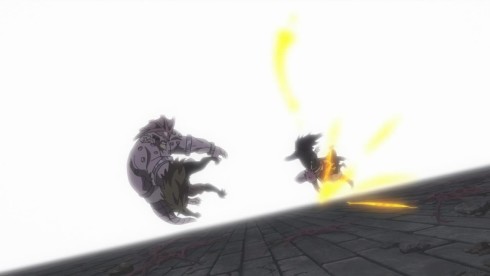 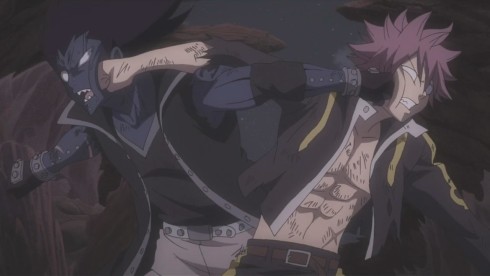 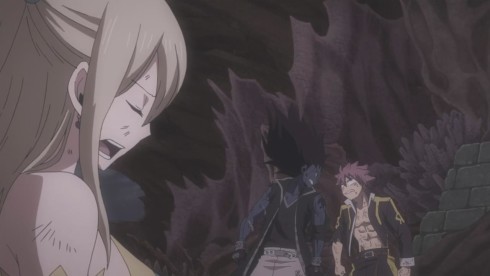 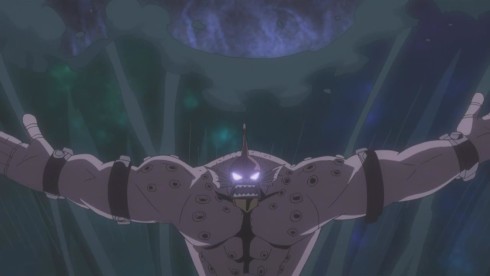 And yeah, they do get done in by both those things. Torafuzer ends up leveling the playing field (quite literally) by flooding the entire area with his own poisonous water, and submerging everyone in it. I actually quite dig this change in situation, as it kinda turns the tables on Natsu and Gajeel all of a sudden just as they’re winning. It shows that there is an element of fairness in Fairy Tail’s world logic. If the heroes can suddenly pull out a sudden victory, then it stands to reason that some villains at some point will be able to do same.

And Torafuzer’s underwater hell does more than just give him the upper hand. It single handily takes out both Natsu and Lucy, and puts Juvia back in harms way. Gajeel’s actually the only one left on Fairy Tail’s side, and he doesn’t fair all that well himself. Its kind of fascinating to see Gajeel’s fall from grace, and Fairy Tail’s in turn, simply because they didn’t prioritize the enemy in front of them over their own petty squabbles. 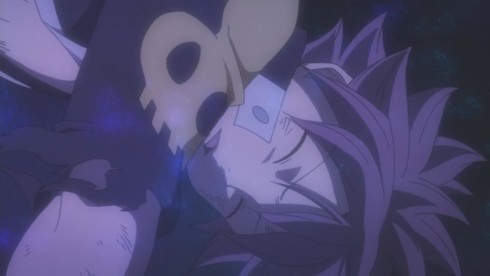 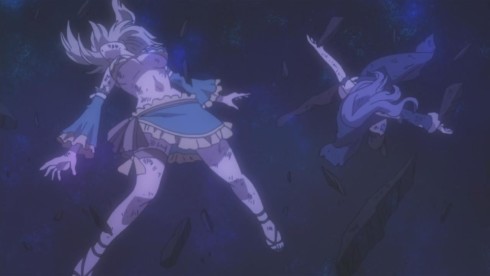 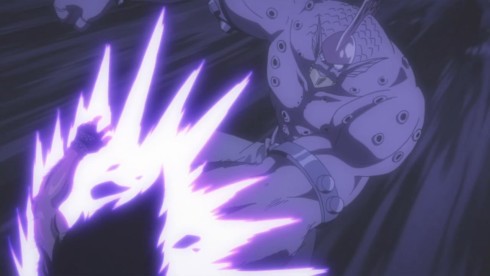 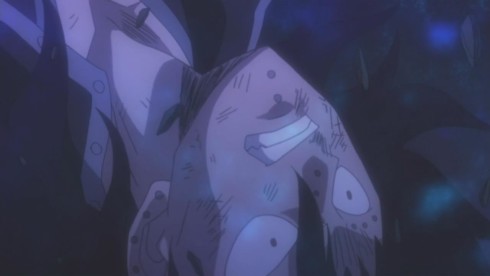 And then the big moment, the one that I’m sure manga fans were waiting for, and Anime fans like myself will remember as a definitive scene. As Gajeel is beaten down to the point of near unconciousness and drowning, its Levy that comes in at the last minute and gives him some much needed air with a kiss on the mouth!

Is it really a kiss? Okay, No not really. Lets be honest here though, out of all the people in the water, Levy rushed to Gajeel and gave HIM the air rather than say Natsu, Lucy or Juvia. This is another one of those great moments for those of us that invest into the Fairy Tail couples. Much like Gray x Juvia, this was another big moment for the Gajeel x Levi pairing. And once again, its all but official that these two are a done couple. 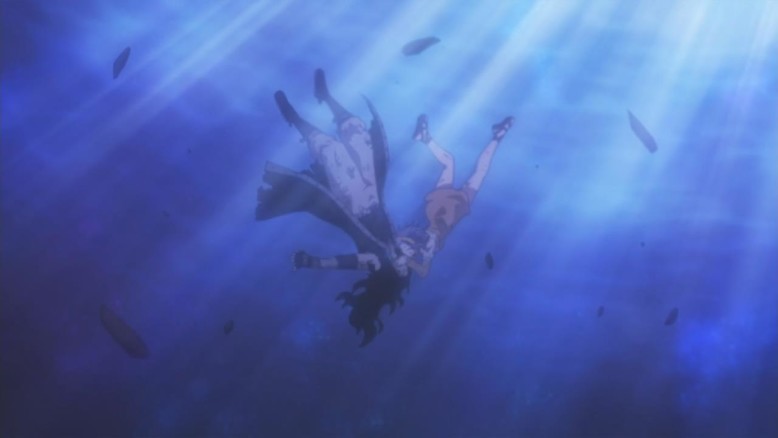 I’m almost kind of impressed at how nonchalantly Fairy Tail is handling its romance elements. It doesn’t give them a big, epic lead up, but rather has the build up happen off screen and fairly organically. Gajeel and Levy being a couple is so darn interesting on so many levels, that them being together is a huge discussion in itself. I largely suspect that we’ll get some time dedicated to them in the next episode, as the big Levy saving Gajeel moment happens at the very end of the episode. 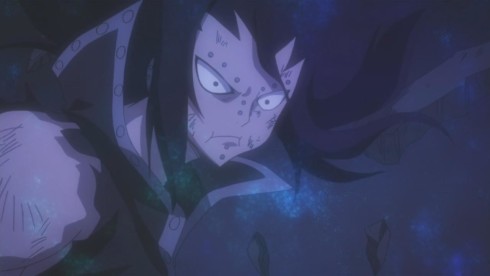 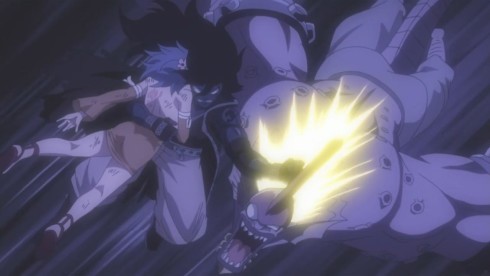 Its a bit telegraphed, obviously, because we see Levy dive in after hearing Gajeel’s voice early in the episode but… I definitely didn’t think that took away from the power of the moment at all. Gajeel smashing Torafuzar down while protecting Levy who just gave him his fighting chance was a great way to end the episode too.

Having said that though, I don’t think a good stopping point should lead to 10 minutes of time wasting content. And yes, I’m still sore about that this week. Is it inevitable that we’ll have moments like this? Yeah but…. given how good the story is in the Tartaros Arc, these arguably small things can really ruin the momentum and power of the story. The Levy x Gajeel Moment, the Gajeel+Natsu combo could easily earn this episode an A+ rating on their own, but unfortunately the journey to get to them was a bit too aggravating for my tastes. Hopefully next week isn’t quite as bad in terms of pacing. My expectation is that it won’t be, and that this episode’s first half was just a bump in a rather well lit and well paved road. 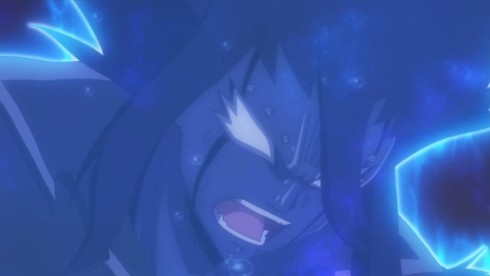 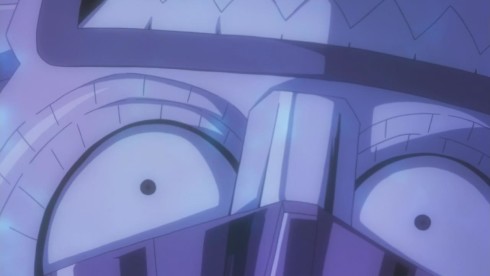