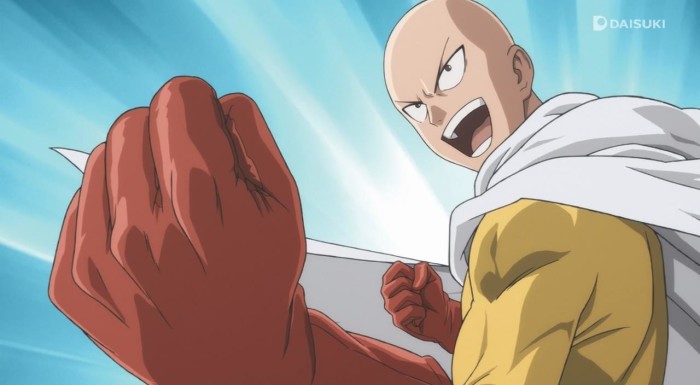 All it took was One Punch. Well okay not quite, but there’s no doubt that that One Punch makes a very impressive and attention-grabbing first impression. Its no secret that One-Punch Man has been the front runner for the most anticipated series of the season, and now that its here, it more than lives up to the hype I’d say. In a season that I’d argue is remarkably weaker than its preceding Summer Season, One-Punch Man is not only the most unique and interesting series to come out of this season thus far, but its also made enough of an impression on me to consider its potential for being one of the year’s best. 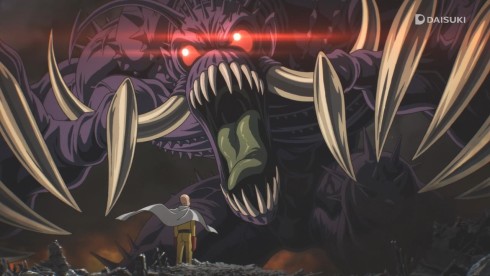 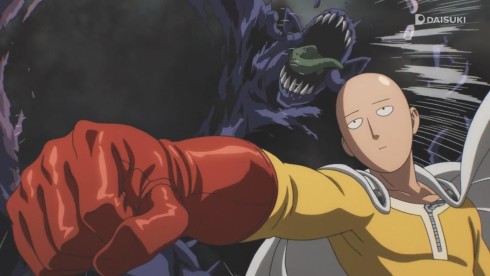 Yeah, One-Punch Man had that good of a first episode, and the fact that the first episode was good is something unique and noteworthy in itself. The art of having a solid and impressive first episode is something that very few series get right, even some of the top tier ones. The infamous “Three episode rule” has been born because it generally takes a few weeks for a series to really get into its groove and develop a cadence.

And to be fair, One-Punch Man’s first episode does seem like more of a tease of what’s to come, but its such a well done tease, and introduces the series main character and core premise quite well. Everything about this series just screams style, class and over-the-top crazyness in a way that just works. I think a lot of it has to do with the fact that we’ve got the extremely talented Natsume Shingo in the director’s chair, alongside Madhouse at the helm for the animation production.

Natsume Shingo has been making quite a name for himself over the years, being a key part of several top projects like a Full Metal Alchemist movie, Gurren Lagann and of course, most recently he served as the director for Space Dandy. With that kind of resume’, I’d say Natsume-san is quite at home with the kind of over the top material that One-Punch man is. 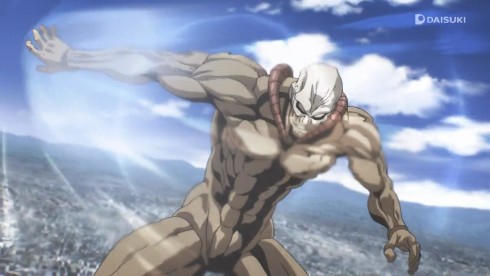 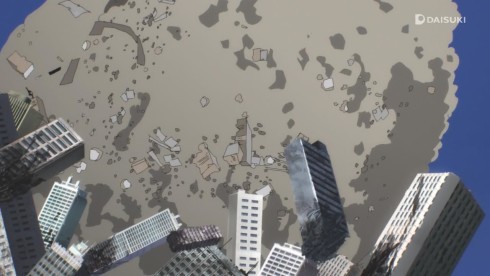 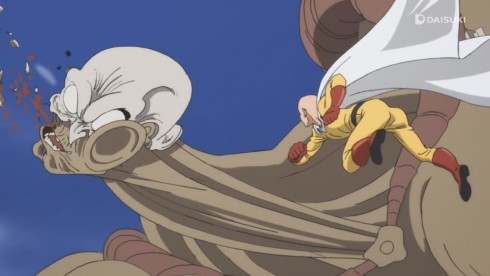 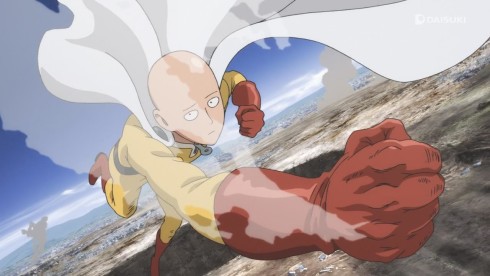 And Madhouse just feels like the prefect fit, because honestly I can’t even imagine another studio being able to handle such intricate and complicated action scene animation and not fail miserably. Even with how talented Madhouse is, its evident even in the premiere that while One-Punch man is a goregous and jaw droppingly well done animation, it still has it rough spots when the action gets too complex. Its a really tough challenge, as some of the action sequences just seem like they’re too big and grand to even handle on an anime tv series budget.

Yet, without using any noticeable CGI, Madhouse I think does a friggin admirable job of providing scale, silky smooth animation and keeping thing stylized and gritty. It helps that the series has some rather ingenius and off kilter humor, because had it just been an overblown popcorn thriller, I doubt it would work as well. 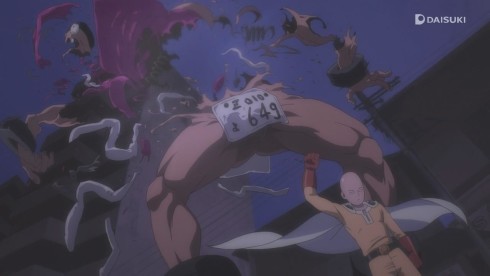 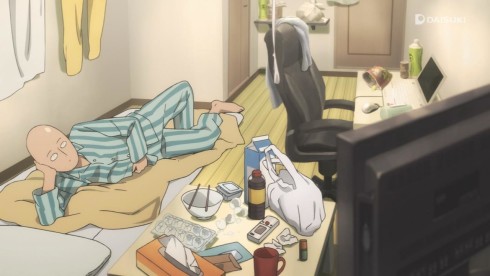 The story for the series is actually quite ingenious in concept. The main character, who’s name we don’t really get in the first episode (but we find out is Saitama in the episode preview) has a pretty interesting origin story and core problem with his powers. The idea is this: After encountering an odd monster and deciding to become a hero, our main man trains hard for three years in order to become the strongest hero he can be.

And he achieves it! But rather than be happy at being the strongest man alive, He’s utterly and completed depressed and disappointed. The issue for him, is quite simply the fact that there’s no challenge, no thrill, nothing of note now that he’s become so powerful. Every one of his battles end quickly, and he barely needs to punch his enemies once to completely and utterly annihilate them. Simply put, The One-Punch Man can get things done so easily that everything’s become boring. 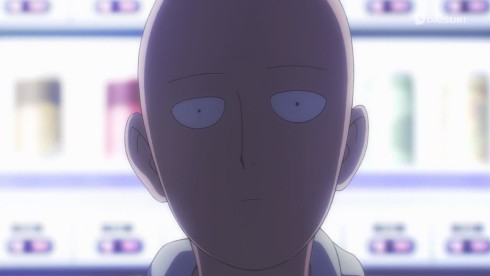 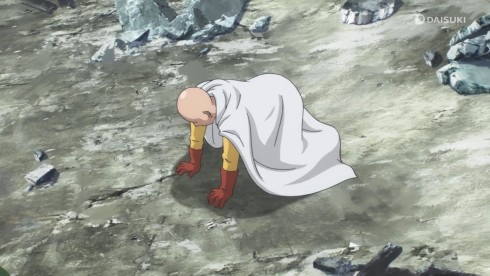 Its a really interesting and unique subject matter, the pain and frustration of those that become the absolute best and are stuck at the top, alone and bored. Its something we sometimes see Anime prod and poke at, often in shounen sports shows but… I definitely have to think that examining that idea through the lens of a superhero is ingenious. Its no small wonder that this is a franchise that’s had a webcomic and then been remade into a popular manga before it got its anime adaption. The idea is just that novel and fun.

Few stories these days can just sell you based on their basic premise, but I’d One-Punch Man is one of those stories that nearly does it. The little bit that’s left? Well I’d say the main character and the stellar performance by Furukawa Makoto pretty much closes the deal. If you’ve read my episode blogs on the site, you’ve probably noticed that I’m not the most focused on seiyuu performance when evaluating and enjoying anime.

There are rare cases, where certain seiyuu just shine through and carry the entire show on their shoulders. Sugita Tomokazu as Gintoki in Gintama, Aya Hirano as Lucy Heartfillia in Fairy Tail, Han Megumi as Gon in HunterxHunter…  There are just some performances that create something truly impressive and memorable that is just unique to the anime medium. I’d say that from the first episode alone, Furukawa Makoto as Saitama (The One-Punch Man) completely friggin carries the entire show and makes the best sales pitch I’ve seen in a while. 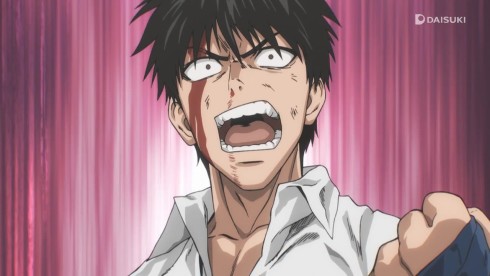 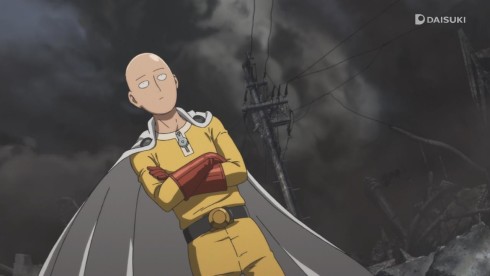 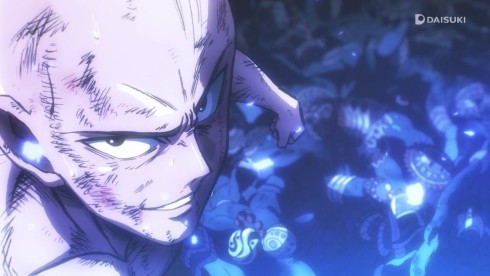 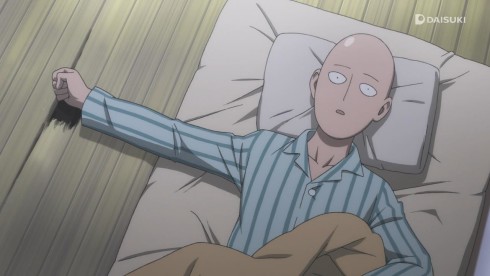 Saitama is just such an interesting character, with such a variety and range of emotions. I love the normal, ambitious and determined youth we end up seeing in the origin flashback. The young man that finally finds his path in life and jumps right into his life as a hero. There’s also a hint of a great sense of humor, as Saitama laughs at the absurdity of the situation that he’s in. There’s a weird crab like monster in front of him, and an ugly looking kid with a big chin that he has to save. Its all pretty absurd and played for laughs, but the way Saitama oscillates between straightman and earnest shounen lead is what makes it feel so darn right.

And then there’s the current day Saitama, the one who looks so bored and calm about life, and that contrast between the main hero and the intentionally over the top cartoony villains is just perfection. Again, its Furukawa Makoto’s immense talent that carves a different yet very fitting voice for his character, and his performance just brings home the gold. 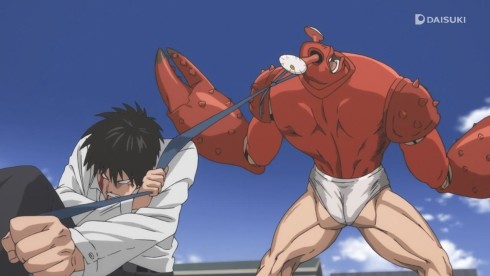 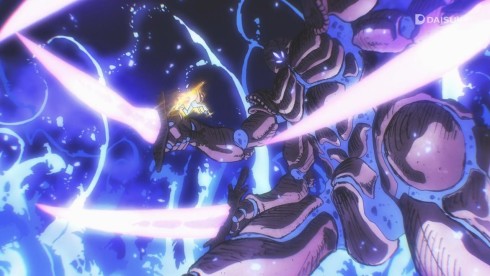 But I think I’ve gone on and on about how much of a technical accomplishment One-Punch Man is, whether its storytelling, character development, animation or voice work. The actual episode itself is actually exceedingly well paced, something that I personally feel is essential for great entertainment. If you’re a writer or familiar with fiction writing, then you’ll agree at how much this show does so well in the first episode, and makes it look effortless.

There’s the whole hero’s journey for the main character, beautifully distilled into a small origin story. Then there’s the actual plot of the episode, which moves beautifully between peaks and valleys. There’s a great sense of rhythm, which is especially impressive because of how fast paced the episode is. We start with a scene of Saitama saving a young child, then there’s the “punch-line” of it only taken one Punch to win, then we transition into the OP theme (Which is fantastic and very in tune with the tone of the series). 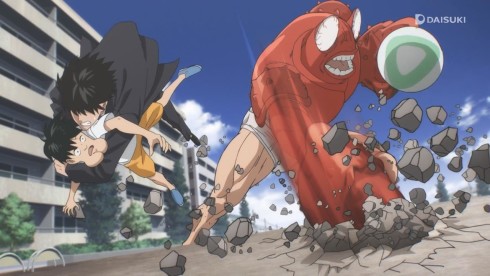 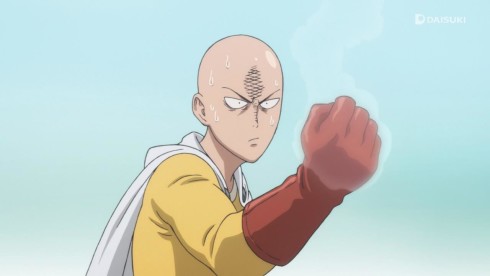 Once the OP theme is done, we go straight to 3 years prior and Saitama’s origin story. After the intenseness and passion of that origin story, the series provides a nice low key brooding moment that explains Saitama’s unique predicament, and then we get that fantastic dream sequence that brings the intensity back up to 11. Finally, we end with another funny and anticlimactic moment, that just closes out the episode in a humourous way. And of course, there’s an after credits scene that hints at what’s coming in the future.

In terms of a satisfying, exciting and complete package, One-Punch Man is a perfect example of how you do weekly episodic content. Its something that only the best shows can do, and do well. 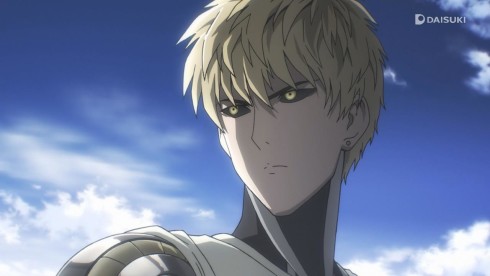 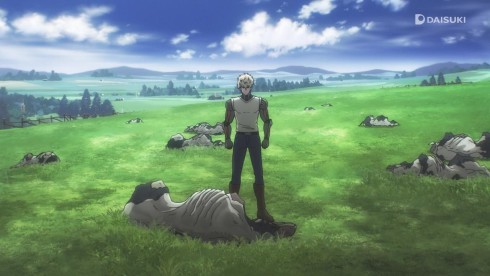 Now… Having said all of that, Its worth considering that this IS just the first episode. Its a jawdroppingly impressive episode, but there is some necessary caution to be had. Will the series be able to keep up this momentum? Will it continue to be interesting? Can it consistently keep up this pace? These are all important questions that we’ll have to find out the answers to in the coming weeks.

Regardless, for now, based on this first episode, I’m completely and utterly won over. All it took was One-Episode XD