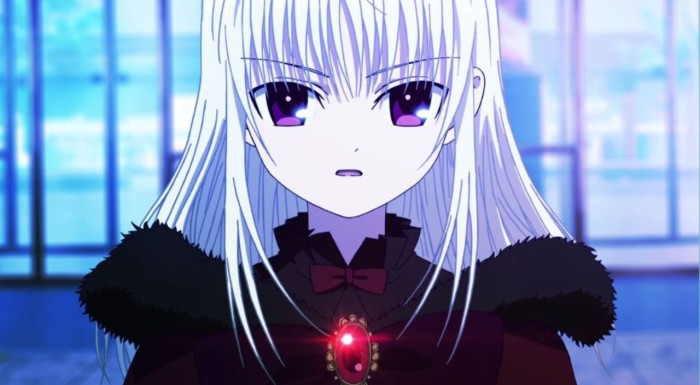 I will be frank. Project K is an incredibly stylized series jam packed with loads of flash and polish and posing and beautiful animation and catchy background music interspersed with a strange setting, sometimes outright bizarre storylines and character behavior and similar things. It is definitely NOT for everyone. But there are some series that just click with people partly BECAUSE they are so delightfully “over the top”. If the characters or story of such a work clicks with you these elements are a delight … if not … well … it is just seen as posing and flashiness over substance. To be honest I think the characters have become partly endearing to me exactly because they are so flashy and posers, but it is true that I really enjoy the storyline as well. Yes – I am one of those who really enjoy the K Project, both the manga adaptations, the first anime season, the recent movie, and the most recent premier episode of the second season. 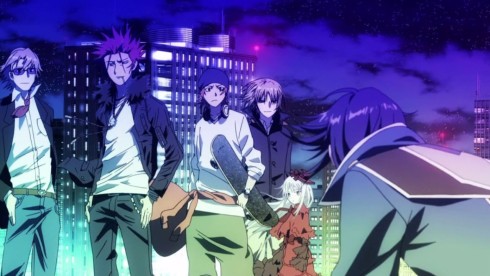 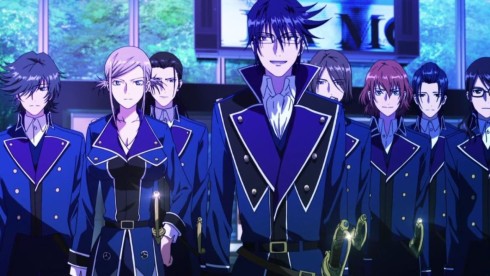 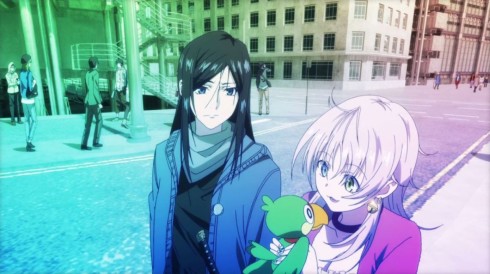 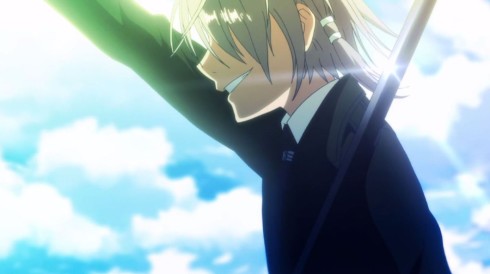 One thing is definitely clear here, and that is that if one has not seen both the first season AND the most recent movie one will be quite lost with the narrative of the first ep of season two. Who are all these guys? What are they all doing? Why? What’s going on? Where did some of them go? Kings? What? For ease of narrative for those who have NOT seen the first season (though I definitely encourage you too) I will include a summary here:

“Yashiro Isana has lived a relatively ordinary, simple life. He lives in the technologically advanced Shizume City and attends Ashinaka High School, a notable high school that is located on an island just outside the areas. Yashiro is friendly with everyone. Nothing seems wrong about him, except perhaps his habit of forgetting where his school-issued PDA is. However, nothing normal has been happening since the recent murder of Tatara Totsuka, prominent member of the infamous Homra. No one knows who exactly killed him but the man responsible bears an uncanny, identical appearance to Yashiro. Seeking vengeance, the Red Clansmen of Homra set out to get Yashiro and kill him. Everyone suspects that Yashiro is the murderer.” 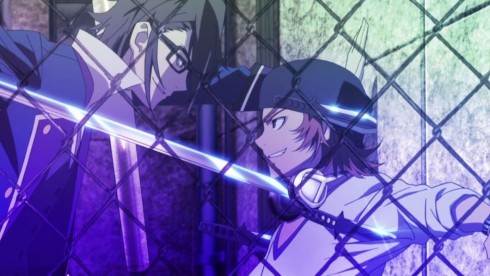 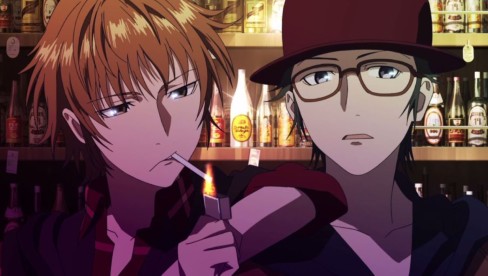 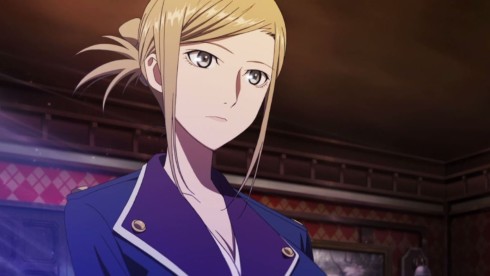 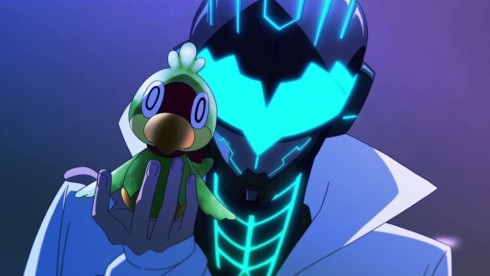 The movie picks up the narrative from the end of the first season and not only introduces a new group into the mix, but also a very important event in the life of Homra. Season two opens up with the understanding that the audience knows of the new group and the recent event that took place in Homra. (By the by, the semi-official summary in the previous paragraph does absolutely zilch to clue in the first time viewer to what is actually going on behind the scenes in Project K. ^^ ) To give a little more very rudimentary background material though … essentially the setting is in a future where there exist seven “Kings” … people who are essentially wielders of specific sets of super powers who can bestow a portion of their powers (usually related to the elements somehow) on others, who then become what are called the King’s “Clansman”. Thus far only 6 of the seven clans’ “colors” have been revealed: Silver, Gold, Red, Blue, Green, “Colorless” and another (some think dark purple or black). These clans have names: Red – Homra, Blue – Scepter 4, Green – Jungle, Gold – Usagi and so on. 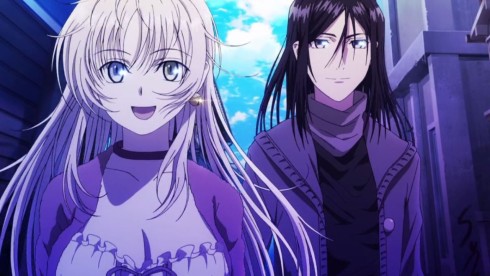 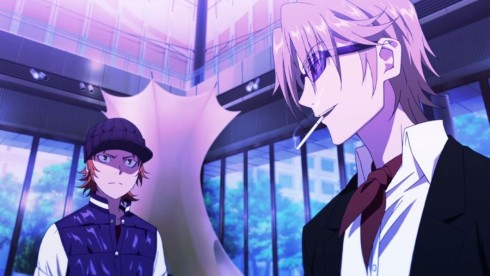 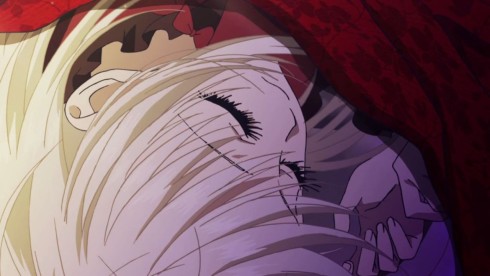 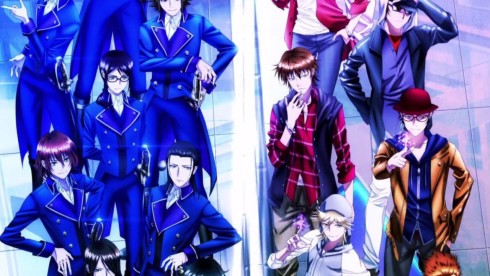 Once again, for me it was an absolute delight to see the cast once again, even some of those who died in the first season – a nice treat, and be re-exposed to the continuing storyline. Everything about this first episode was a delight, but particularly the level of animation and the return of the background music. In fact the animation was so lavishly done and involved that some viewers complained of feeling twinges of motion sickness from the animated “camera panning”! However, there was one element that was a little too, too over the top in my opinion, and that was the degree of fanservice culled from one of the characters. To be sure K has always been filled with fanservice for both the sexes – in season one the main recipients was a character named Neko, a young full grown woman who was often shown running around naked and featured prominently so in the actually rather lovely ED. Even so, the animated detail was a little … much for me personally. Hopefully it will not become a common thing with this particular character. Other than that side caveat, though, there is not much else to say about the content itself. The first episode really WAS little more than a gorgeously created “meeting of the gang” once again. 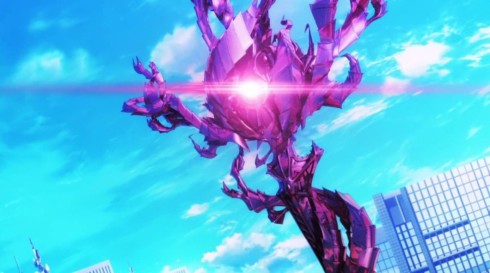 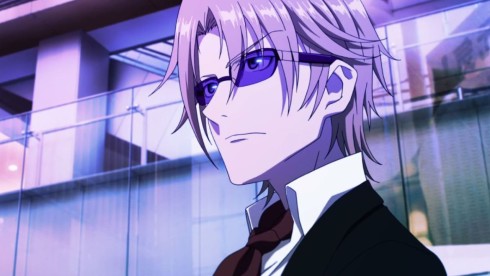 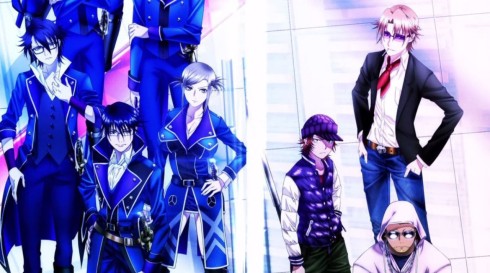 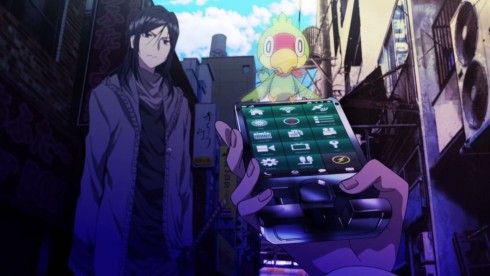 I am very, very interested to see where the story will be taken … unfortunately this is one of those series that is likely to not be paid a lot of attention to (it divides the first time audience pretty strongly and consistently), and if for no other reason than that I am tempted to do a review of the series at the end of the Fall season, if not take it up and blog it. But this is one of those series that has a tightly knit and consistent stream of information throughout its various mediums … the manga, the anime, the movie (and even the game, I have heard), where there is so much going on in the background and the episodes that each post would more likely than not be an exposition of all those other sources, explaining what it was that I saw and what it related to, etc. It would likely turn into a sort of “history lesson”! While such things may be interesting for some, I honestly wonder whether many readers would be dreadfully bored…. Even so, this is definitely one of the series I will be considering for blogging this season. I like the franchise quite a bit, and after all I believe that sometimes blogging is an opportunity to try and share with others just what it is you like and why. XD

in K Project - Return of Kings