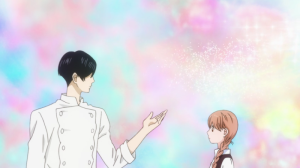 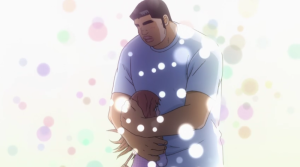 My Love Story took last week off presumably because they needed extra time to animate all the sparkles, but we’re back with not only the finale to our two-parter, but to the show itself. Confessions will be made! Desserts will be baked! Audiences will be adorabludgeoned! And anime’s most charming high school rom-com will come to a predictably heartwarming conclusion.

Our story centers around the  C’est Nouveau Patissier competition, as Yamato fights to help Ichinose win the gold, Takeo fights between his self-sacrificial tendencies and his own happiness, and Suna fights to keep Takeo from losing his mind worrying that Yamato might not choose him. Our hero begins the episode about as down as we’ve ever seen him, but Yamato’s immediate phone call, her total honesty about helping Ichinose, and the fact that she communicates (there’s that word again!) how much she misses and loves him keep him from a complete Doom Spiral.

Then he goes bowling with his friends and Nanako OWNS THE EPISODE with: 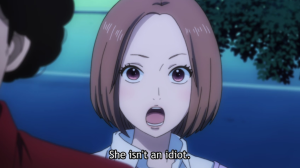 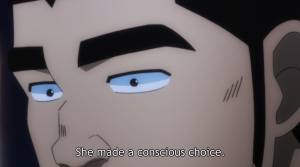 Meaning that if Takeo breaking up with Yamato isn’t about what she wants, then it has to be about what he wants—and he doesn’t want that at all. So Takeo finally decides to fight for his own happiness. He dashes off to inform Ichinose that he’s not going to “let him have Yamato,” a slightly misleading translation that makes it sound like Takeo is treating Yamato like object, but all he’s really saying here is that he isn’t going to break it off with her like Ichinose told him to. Ichinose, the dipstick, accepts this “challenge” and announces that he’ll declare his feelings to Yamato after he wins the patissier competition.

This is as good a time as any to talk about everyone’s favorite (PFFT) pastry chef, as you may have noticed that my vitriol towards him is a lot more muted this week. I still don’t like the guy, but OreMono takes care this week to assure us that he is not, in fact, a calculating predator but rather a… well, an idiot, mostly. He’s egotistical and melodramatic, so consumed by his own thoughts (which clutter the screen to an absurd degree this week) that he can’t even imagine an alternate interpretation to the world around him. 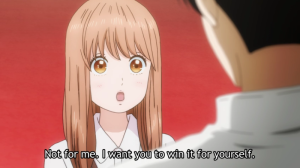 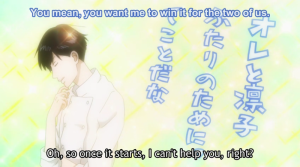 Don’t get me wrong: He’s guilty of placing Yamato on a pedestal and seeing her not as a person, but as a tool to improve himself, trying to turn her into his very own Manic Pixie Dream Girl. He’d be an awful boyfriend. But once he decides to let Yamato choose her own future, the series stops treating him as a genuine threat and more like a punch line. His overblown “muse” speeches are played with excessive sparkles and bubbles even by this show’s standards, poking fun at your typical long-suffering romantic hero, and Fukuyama Jun does such a magnificent job with his wild mood swings that it’s hard not to enjoy him for the comedy if nothing else.

Plus, OreMono rejects his whole Manic Pixie Dream Girl fantasy so thoroughly that I’m sort of glad he existed as a character just so we could see this story play out. Yamato isn’t as prominent a figure this week as I’d have liked, but her reactions to Ichinose are pitch-perfect, as she tells him (twice!) in no uncertain terms that she’s not his muse, but just a normal girl who also likes to bake. She teaches him a little lesson about believing in himself while simultaneously smacking down the Myth of the Savior Girlfriend, and it’s wonderful. 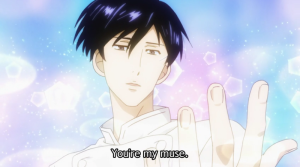 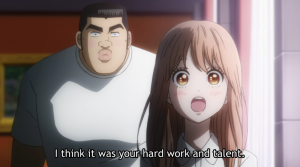 We chatted a lot (in both the post and the comments) last time about Takeo needing to sit down and talk to Yamato about all this, and a part of me still sort of wishes we’d seen more of that this week. But in the end I did like the way this one handled itself, allowing its characters to be fallible humans while still maintaining OreMono’s series-long promotion of communication, as well as its ongoing balance between respecting others’ happiness and fighting for your own.

To continue its portrayal of healthy relationships and personal growth, Takeo and the show itself had to walk a delicate tightrope this week: On the one hand, Takeo needed to acknowledge his own desires for once, but on the other, he couldn’t override Yamato’s agency to do it. While this did mean that Yamato remained in the dark about Ichinose’s feelings, Takeo does this out of a sense of respect for both Ichinose and especially Yamato, as he wants her to make her own decision without feeling pressured from any direction. The fact that he thinks “I hope you choose me” is huge, though, and a major sign of his development as a person since that day he fell in love with her and immediately tried to hook her up with his best friend. 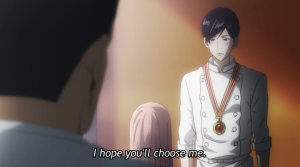 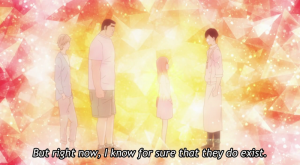 And, in the end, My Love Story circles right back around to its pro-communication message via Takeo’s remark that the most important things—feelings, hearts, and souls—are the ones you can’t see, and how difficult it can be to convince yourself they really exist. I’d never thought much about this before, but shoujo’s use of sparkles, bubbles, and flowers is very much a way to visually represent those important, invisible things, and boy, does the OreMono finale utilize that, as sparkly triangles literally explode(!) from Yamato and cover the screen when she announces that Takeo’s had her heart from the moment she met him.

It’s a lovely (and so very shoujo) way to portray not just the way those emotions “look” to the characters, but how speaking one’s mind can make those “things that can’t be seen” visible to another person. By vocalizing how she feels, Yamato shows Takeo those intangible emotions, and Takeo does the same for Yamato when he hugs her, tells her he doesn’t want to lose her, and (yay!) calls her by her first name. And, really, where better to end a series about the importance of communication than with the characters coming to understand it themselves? 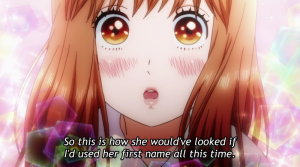 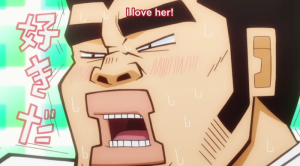 I fell for this (love) story pretty much from the word “go” and enjoyed all of its mid-series cuteness and silliness, but there were moments in the middle when I worried it would “just” be a fluffy rom-com puff piece, and wondered how I was going to milk that for a blog post each week. Thankfully OreMono eased those fears through a fantastic final stretch of episodes, exploring a variety of relationships and difficult emotions that not only allowed it to press on its overarching themes about honesty and finding a balance between respecting others’ feelings without denying your own, but to also develop its protagonist in gradual but significant ways.

Takeo (and Yamato, really) has grown from a well-meaning but dense and borderline self-loathing kid into an empathetic and thoughtful young adult who’s eager to help others but won’t sacrifice his own happiness to do it. He still backslides from time to time (he’s only human, after all), but he’s getting better at communicating his feelings and listening to others’ needs/wants before acting on his own assumptions, and that’s only helped him mature both as an individual and in his interactions with others. 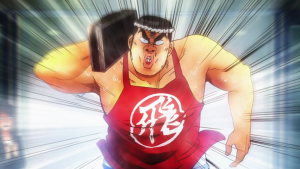 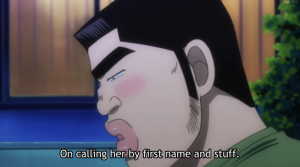 All-in-all, OreMono proved itself to be not “just” a cute, silly rom-com—although it was that, too, and splendidly so—but a sequence of perceptive character studies and coming-of-age stories. It explored the difficulties of adolescence and romance without spiraling into tired cliches or destructive melodrama, and in the end it always pointed its characters (and audience) towards an outcome that promoted kindness and candor in equal turns. I said at one point that it functioned as a sort of handbook for teen relationships, and that very much held true right through to the finale. Between this and Snow White with the Red Hair, the bar for healthy shoujo romance has been raised to an impressive height, that’s for darn sure.

Would I watch another season of OreMono if we got it? Oh, yes, without question, and I plan to pick up Viz’s manga release once it passes the anime. The author has more than earned my trust that she can continue to spin funny, adorable, and intelligent stories, and I love these characters enough that I’m happy to keep hanging out with them. But as far as endings go, this was a pretty perfect place to leave our cast, bringing the story full circle to our self-sacrificing ogres and reminding them that they do, in fact, deserve happiness as much as anyone else. 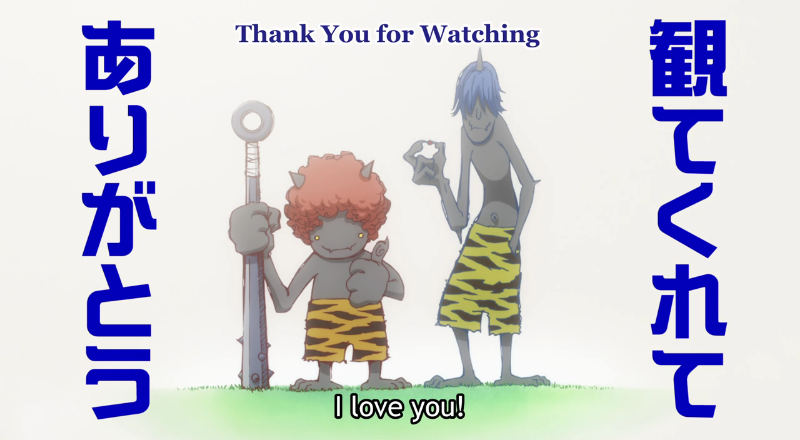 I’m delighted that we were able to get two cours of this charming little series, and equally pleased I got to talk about it with you awesome people each week. Enormous amounts of gratitude to the great folks here at Anime Evo for inviting me to guest blog! They’re the nicest guys, seriously. It’s been a blast to chat with them and all your readers, too, and I hope to hear from you again either over at JND or via Twitter. So thank you all for tuning in each week, and, of course: SUKI DA!

Every time a Suna laughs, an angel gets its wings. #OreMonogatari pic.twitter.com/PrloJ51hCW 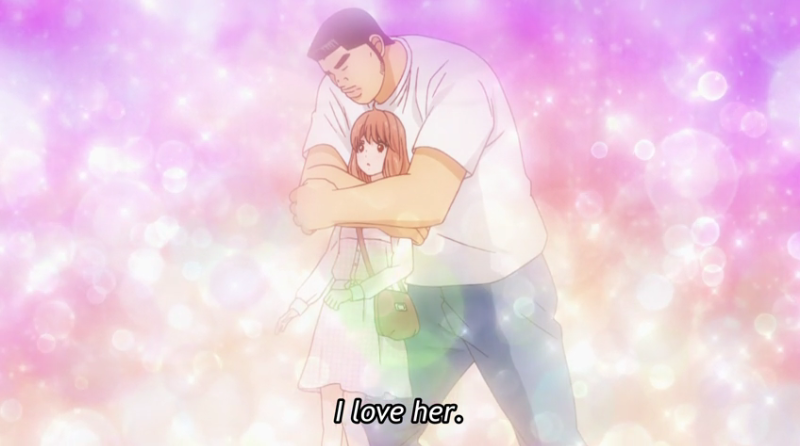