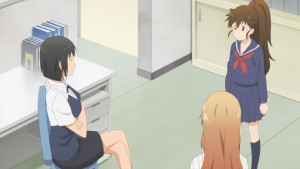 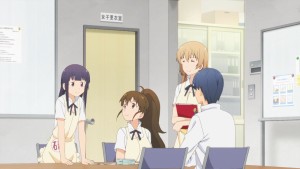 Change really is afoot huh? It really does feel like we’re going somewhere we’ve not gone before with this latest episode of Working!!!. Once we get there, I’m sure there will be no turning back. This third and final season of Working!!! has been about change and progress from the get go, but it was this week that we saw the full ramifications of all the moving parts that we’ve seen move in these past 12 episodes. 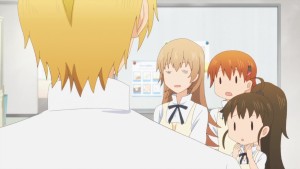 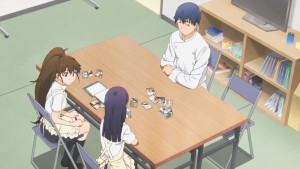 Everyone is moving on or growing into new roles, something that feels pretty appropriate given that the series is ending. Some characters have come farther than others, but with this week, we’ve largely dealt with nearly everything except that core, central issue of Souta and Inami.

Yachiyou is intending to quit Wagnaria and finally go out and see the world, do something more with her life (with Satou by her side of course). For Satou, it could very well be a similar situation actually, as I don’t doubt that the reason he continued to work at the restaurant was to see Yachiyou more than anything else. I have to say… I really enjoy seeing the small acute differences in Yachiyou and Satou now that they’re dating. They’re different, but not so much so that it feels bizarre or weird. 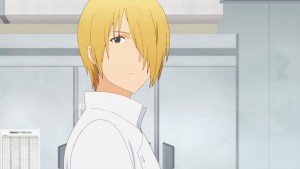 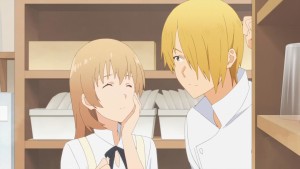 Satou is still Satou, quiet, timid and a man of few words. Yachiyou still cares for everyone, and is still quite a bit odd when it comes to romance. My favorite part of the episode though, was the but where both Satou and Yachiyou peered at a clearly distressed Popular. Yachiyou’s worries, and then Satou’s support, followed by that gentle prodding of his mention of Popular’s height, it all seemed pretty natural and normal. Satou and Yachiyou together, feels so natural and real that its almost odd that it took them as long as it did to get together.

With Yachiyou quitting Wagnaria though, it naturally falls on Popular to assume responsibility as they new chief. For Popular, that makes a lot of sense, as she’s been slowly growing into a supportive and caring role throughout the season. Its an interesting to note that Popular’s character arc has been about growing up and maturing as a person, despite the fact that she clearly worries about her height rather than anything. Despite her worries on the matter, I agree that she’s probably the best and most suited to get the promotion following Yachiyou’s departure. 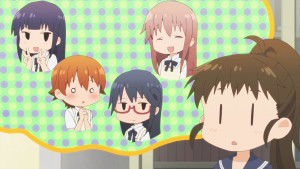 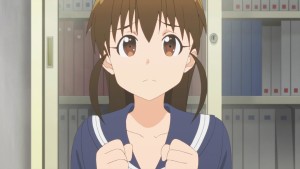 As both Yachiyou and Kyouko know, however, its also the fact that Popular’s probably the only one who can reasonably do it too. She’s the least weird one, when looking at the Wagnaria staff as a whole. One could argue that Souta actually has the chops to manage as a chief as well, but given his issues with Inami and his cross dressing, he threw any confidence in him largely out the window. Souta is still a kid afterall, and a kid that’s got his own share of issues and problems to work through.

One of the more surprising resolutions to come out of Souta’s cross dressing transformation into Kotori, was the whole moment with Kirio. I had completely forgotten about the fact that Kirio was still chasing after Kotori, and the way this whole thing resolved was pretty brilliant. It makes sense that someone as positive as Kirio would take the whole reveal that the girl he was crushing over was a guy, and that he’d be cool and supportive of the whole thing. It added an extra layer of hilarity that Souta turned out to be Kirio’s first crush, in his childhood days when Souta was still dressed like a girl. All in all, the whole plot point with Kirio resolved nicely, painlessly and with that touch of hilarity that Working!!! is known for. 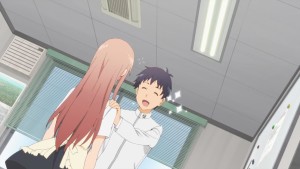 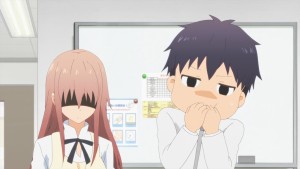 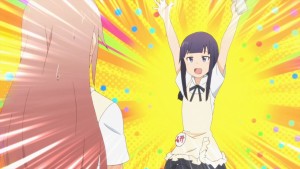 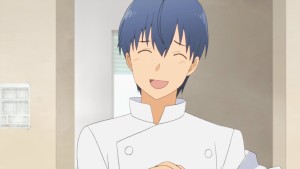 The other Yamada sibling, Aoi, had her own final character arc moment this episode too. For the female Yamada, it was pretty much actually getting serious and being able to do some of the work that she had been getting paid to do for a while. I’m not sure what else to say other than it was appropriate to have Yamada grow up a bit too, especially with everyone else having grown so much in the past few weeks. Having Yamada actually be kind of productive is probably more than I could have ever hoped for, for her, so lets count the victories as they happen XD

We also got a little segment of Souma being well… Souma. Its nice to know that some things never change, and that’s perhaps the one constant in the Working!!! cast that perhaps, doesn’t need to. 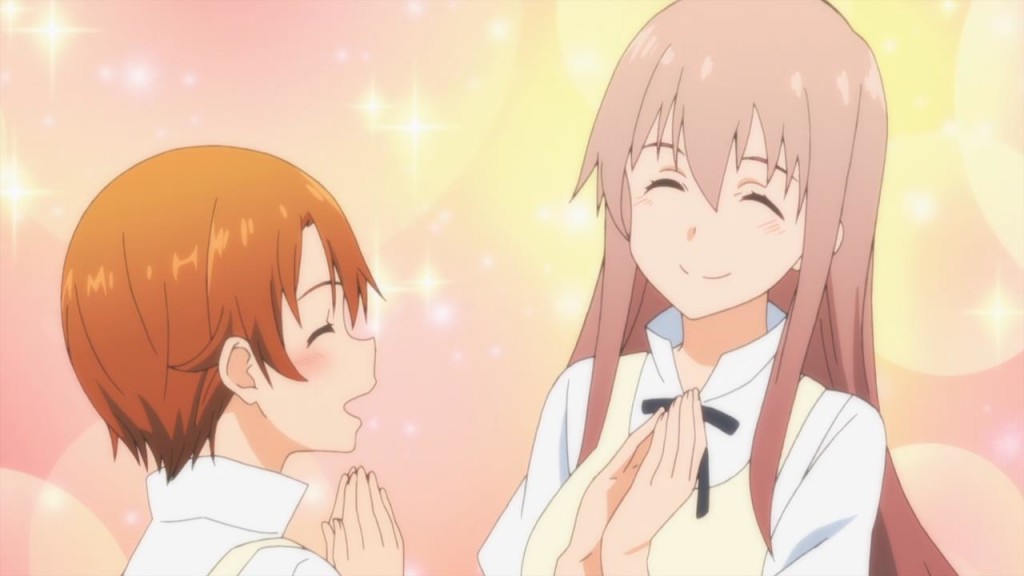 The One True OTP…?

Finally, there’s Souta and Inami. I’ll confess to being a bit worried that we’re more or less relegating the final, main romantic plot to the final episode here, since this episode largely served as a transition for the other characters and a setup for the crux of the issue. I actually kind of applaud the show and the writing for using the Kotori-chan cross dressing element rather wisely.

Unlike what I and probably most of the audience thought, Souta cross dressing wasn’t him “just” losing his mind (even if it was a big part of it). No, Souta cross dressing as Kotori and interacting with Inami as a girl served a much larger purpose that culminated in the big question that Souta asked her near the end of the episode; “Do you like me as a girl or a guy?” 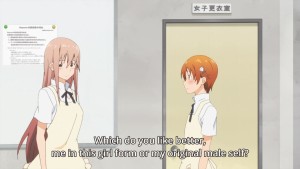 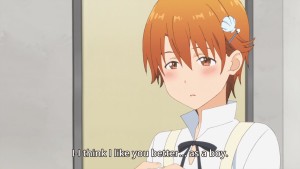 I hadn’t realized how much of a gender issue Souta was actually dealing with. While he very much was a man and wanted to be one, the childhood of cross dressing, and even being liked as a girl and considered “cute” did do a number of his sense of gender identity. It makes sense, therefore, that Souta wondered if the girl he liked preferred him as a guy or a girl, especially one that’s actually been quite afraid of men.

The fact that Inami mentioned that she preferred Souta as a boy, as I think the last bit of a push the guy needed. Inami, unlike most of the women in his life, including his mother, actually accepted him for who he really was, and who he wanted to be. This theme of acceptance is something that we’ve seen in spades throughout working’s entire run, and its really culminated in all its romantic relationships. 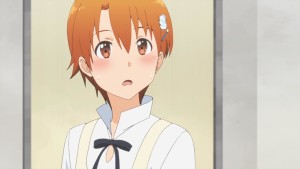 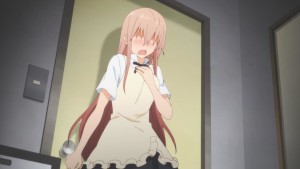 Everyone wants to be accepted for who they are, and for people to at least deal with their faults. Some faults are simply so problematic that they need to be changed, but generally, the most successful relationships are those that take the good with the bad. The reason that both of Working!!!’s couples “work” (no pun intended) is because the people in those situations generally like each other for who they are.

Interestingly… Now that Souta’s accepted that he’s in love with Inami, and asked her out (as he does after hearing her response), the stage is set for Souta’s mom. Unsurprisingly, Souta’s mom mostly lay in wait for him to make his decision regarding the girl he likes. So now… Inami is square in the crosshairs, ripe for “evaluation”. 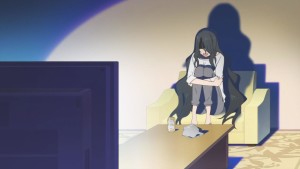 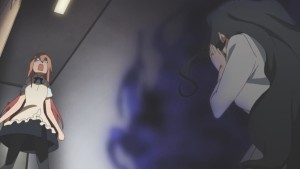 So now, with this penultimate episode over, we’re poised for the one final thing to resolve in the final episode. Again, I’ll mention that I’m a bit worried that we’ve only got one episode to resolve the Souta and Inami plotline, so there isn’t much of a chance for an epilogue. It’ll be tight, but I do think that Working!!! can deliver this one final thing before we say good bye.

Oh and before I forget, I will mention that I was a bit surprised that we never really got anything on Maya at all, this episode or this season. I guess she really is just too normal for Working to focus on XD

Note: If you’re wondering why this post is so late, and why the other shows haven’t been blogged yet, its because I just moved and am going through some really intense life changes. Bear with me this week as I work to get everything back under control and in routine! 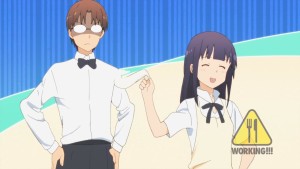 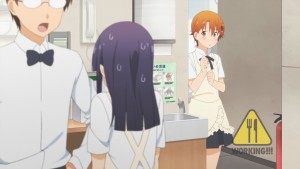 The final episode, next week. Not much else to say other than I’m both looking forward to it, and kind of sad that there’ll be no more Working!!! after that.