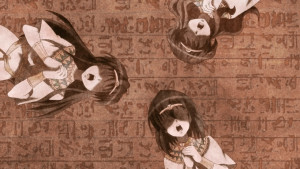 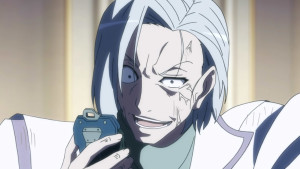 If there is anything that Symphogear does well it is the climax of their seasons. Once again they just hit the ball out of the park with an episode that delivers a ton of entertainment value, good action, a bit of character focus on Elfnein and Carol, and just ends with the setup for an even more spectacular episode next week that will finish the third season off. This was a tough episode to deal with just from the point of view that a lot of huge things went down and breaking the whole thing down did take some time. Definitely one of the best episodes though of the third season and they just brought everything together nicely. I can’t wait to see the X-Drive showdown against Carol and if she has something else up her sleeve.

I think what makes Carol one of my favorite villains in the series so far is how utterly broken this person is. She is just full of contradictions. She switches between the body of a child and an adult, and has a mind that is kind of a mash of both. Carol has accumulated memories over the centuries, but she has still remained the little girl who wanted to both avenge her father and fulfill his dying wishes in her own way. You can just see it when her plan is coming apart how she falls back to the desperate child. She can create this plan to destroy the world, but when things go wrong she just can’t handle it. And I don’t think that is an issue for the story, but a strength. Carol is a very mixed up person and that has been seen throughout. Her standing there in the first episode crying at the memory of her father shows that despite everything she is very much trapped between adult and child and has never moved on. That she always creates these bodies the same as she was when he died shows that she hasn’t been able to move forward at all. 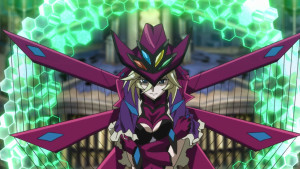 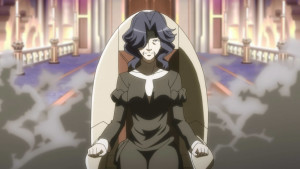 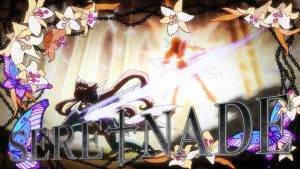 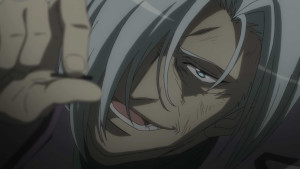 As I thought they didn’t actually revive Professor Nastassja from the grave and it was the Chateau’s defense system. Considering this is Carol I’m not surprised she managed to create this kind of doppelganger that can transform into both the Professor and Maria herself. it made for an awesome showdown between the trio and Maria with the Black Gungnir. Not an easy fight, but I couldn’t imagine Carol would create a defense that wouldn’t be able to handle itself against Symphogear users to some extent. She even had a backup plan that just blasting the place apart would just lead to it going out of control and perhaps causing an insane amount of damage anyways with no hope of fixing things after. If Carol hadn’t lost her head and failed to properly finish off Ver then it could have been the end.

Yeah, Doctor Ver ends up dying a hero just like he wanted. He certainly goes out as a horrible hero considering the amount of people he killed and hurt along the way. But in the end it was his actions that not only stopped Carol’s plans but also kept Maria, Kirika and Shirabe in one piece. I suspect he gave them a data chip with information on his Linker so that they can continue fighting going forward. That allows them to continue fighting and boosts his reputation further. The great doctor who invented this ultimate Linker and is the reason the heroes who saved the world had the ability to do just that. He was a terrible human being, but he gets his legacy.

I appreciate that Ver didn’t simply survive and walk away from this. He did get impaled through the stomach. That he managed to even live that long is pushing things, but he dies regardless so I’m ok with it. He didn’t just manage to tank every thing that happened this episode. While he was definitely not a good human being, his tendency to mess with people and want to be a hero helped out the main cast this time around. 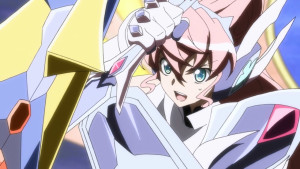 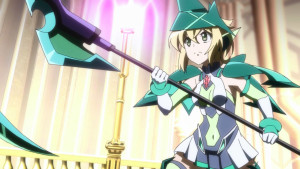 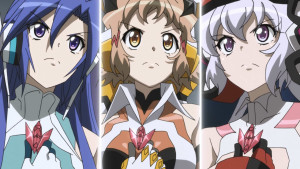 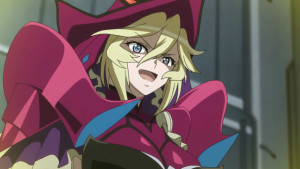 Of course the awesome part of the episode was all the different fights going on. It was a tough showdown for both parties. It was a very good symbolic moment for Maria, Kirika, and Shirabe to take on the symbol of their past mistakes. This version of Maria was pretty darn tough and put up a great fight there. Safe to say it probably was stronger than the normal Maria, but they still managed to overcome her because they were a team. It was a tough finish though since Maria had to actually attack her sister’s form. But she was dedicated to the cause and knew no matter what she had to finish this. The stakes were just too high to let herself be shaken up at that critical moment.

Things didn’t go all that well for Hibiki and company who had to face a pissed off Carol numerous times. In their regular modes they didn’t stand a chance against her. Carol was just too darn powerful. Even using the Ignite Module it was clear the gap in their abilities was just too big. At this point it wasn’t that the Ignite Modules couldn’t be used without helping Carol, but that their boost wasn’t enough. Carol in the position she was in had absorbed so much phonic gain that she was basically god tier. Using the kind of phonic gain that the cast had last season when they used their X-Drive Modes. Just too much power even with the cast abandoning all limitations on their gears to try and match up against Carol. It really did take everyone to survive this. Using a group Swan Song, plus their Ignite Modules, and channeling all that through Hibiki and Maria in order to activate their X-Drive Modes. They made use of all the power that Carol was flinging around to unleash the miracle that they needed. 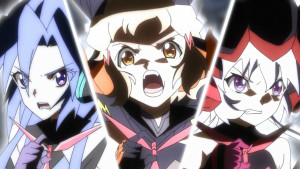 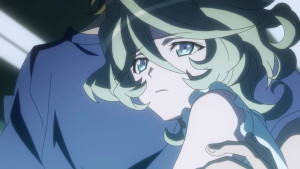 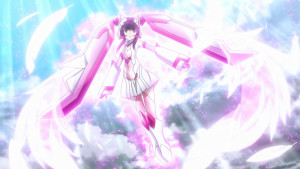 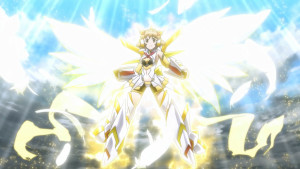 As always I just love the music in this show. The group song for Maria, Kirika, and Shirabe was excellent and I enjoyed just listening to it even without the action or what was happening around the world. It’s a really good song and I’m glad they saved it for this occasion. Another song saved for this occasion was Hibiki’s first song being sung while using the Ignite Module. The others had their songs used in that way so it was only fair for Hibiki to get her turn. No shock they didn’t use her second song since it just wouldn’t fit for such a harsh mode like the Ignite Module. The first song had a toughness to it that made sense for this occasion. And of course I still love Carol’s own combat song. It is just a mix of overpowering and dangerous that works really well for her character.

Can’t ignore the sacrifice made by Elfnein who if she isn’t dead….is at her limit here. Instead of just standing around and making that her defiance, she took action. Pushing herself even as she was injured to fight against Carol’s plans. Working with Ver and the rest of the bridge staff to turn the destructive energy of Carol’s Chateau into something that could restore what had been lost. Since it was a machine made on the principles of alchemy, going the next step to recreation wasn’t pushing things too far I thought.

It made for an interesting showdown of words between Carol and Elfnein. Both of them fighting for their ‘father’ in their own ways. Carol unable to let go of her rage and desire for revenge against a world that killed him. Fulfilling what her father asked was just a small part of her motivations. While Elfnein found her own answer. The idea that her father wanted Carol to forgive the world for what it did and continue to live. The difference between them despite having the same memories is how they treated his loss. Carol can’t let it go and even if it means losing the memories of her father she will fall as far as she can in order to get revenge. Even though when she does get revenge she won’t likely even know why she did everything she did. 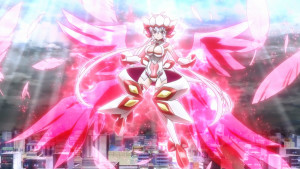 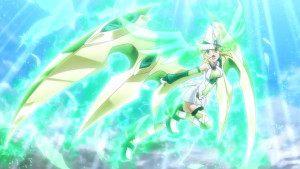 So, in the end this was a great second to last episode for the second season. The show is hitting its stride at the right time and setting itself up to leave a great final impression. The main cast has activated their strongest mode and should be able to put up a fight against Carol now. I’m curious if it will simply be a fight against Carol in this state or if she’ll find a way to make it more complicated and tougher for the cast. She did seem rather startled that they used the phonic gain she collected like that. Also have to consider that Elfnein is near her limit. I’m curious if Carol does find some forgiveness and maybe sacrifices her last life to help Elfnein or if Elfnein somehow helps Carol in a way that lets her live in this world and find a way to let go of her hate. Though at this point I’d go for the former. Carol has killed too many and hurt too many to be able to peacefully live in the world now.
Score: A+