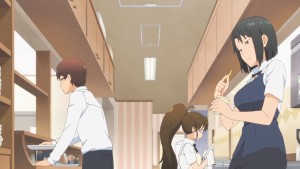 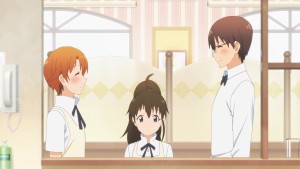 Love is happiness, but love is also pain. Or so they say… Or at least I think they say that. Who are they anyway? Uhh… Sorry I’m still kind of out of it after this episode but… It happened guys! It finally happened! And man… Does it feel good after all that anticipation. 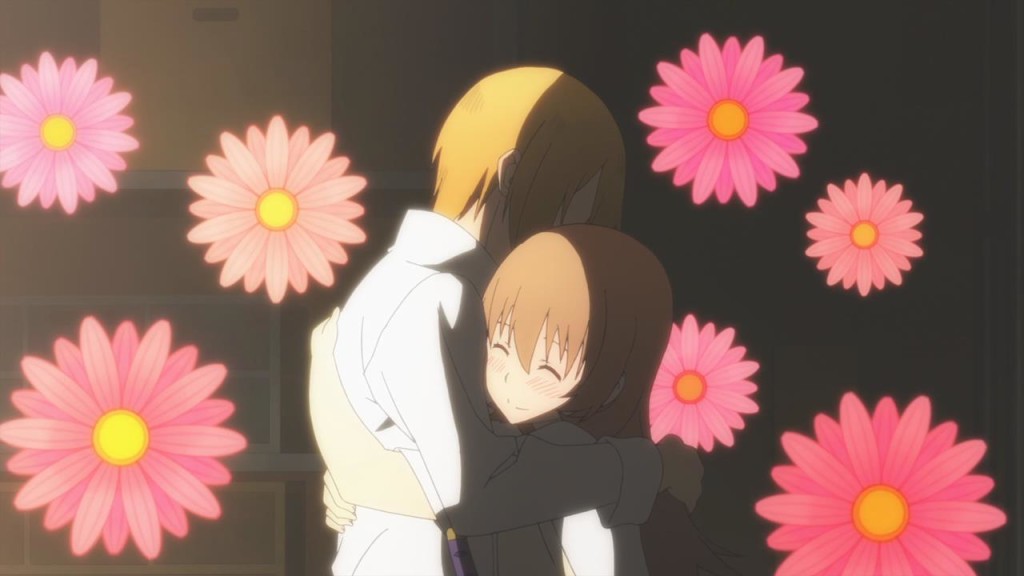 How it Feels to be on the SS Sachiyou

Yachiyou and Satou are dating, its official! I’m sure that everyone and their Dog was just blissfully and purely happy, and I’m right there with all of you. This has been a long time coming, so much so that I’m sure we all wondered if it was going to ever happen at all.

What I found really interesting though, was my reaction to it all, when it did happen. I naturally felt happy and content, but the feeling that was probably the most overwhelming was that of relief. Somehow, somewhere inside me, I think I always doubted that things would go as well as they did, that this would actually happen. 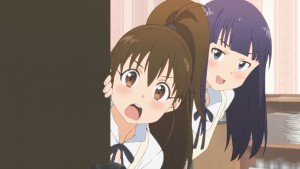 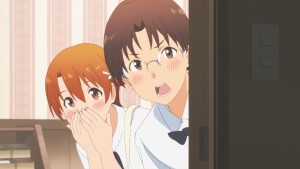 Working!!! has made incredible progress throughout its third season, but it and Satou by extension, have always danced around the fundamental issues. Someone had to ask someone out, and given that Yachiyou was just so oblivious to her own feelings despite being extremely taken with Satou, it fell to HIM to make the move. Three seasons in, near the end, though, he finally did it, but not without some tense trolling from the show.

The part that probably felt the worst, like a knife stabbing me square in the heart, was the “I’m sorry” in the breakroom from Yachiyou. I admit, Satou had been slow, but I actually thought for a second that we had lost our happy moment for these two. It was a joke that I’d even call mean spirited, but I think Working!!! more than made up for it after. 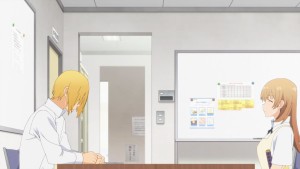 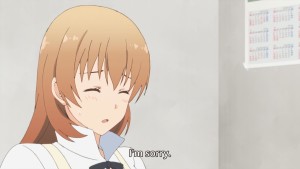 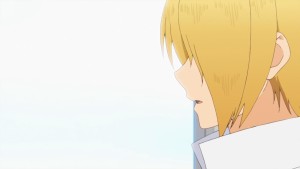 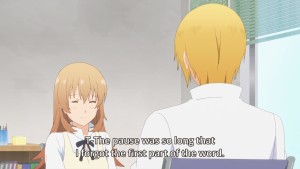 Yachiyou, worried about her fumbling words around Satou, and having overheard him earlier talking about quitting, had just had too much. I don’t blame the girl, because even if she didn’t quite understand why, she was in quite the pressure cooker there.

As was Satou, but to his credit, he was the one who tracked her down, and then finally confessed. I had almost forgotten about Yachiyou’s misconception about Satou loving some Ghost, but it was nice to call back to it, and have Satou dispel that silly rumor. 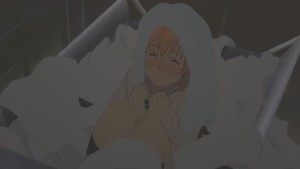 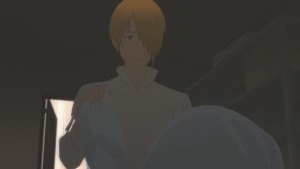 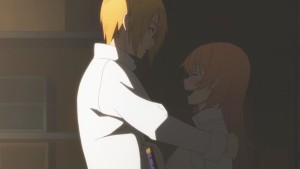 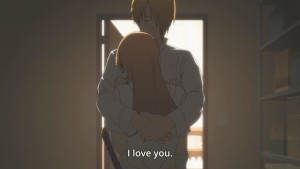 The way Satou did it felt so darn proper, so concrete, so final and direct, and that’s what made it so awesome. Satou had finally had enough, and finally just laid it all out on the table. It was because of that confession, that Yachiyou’s yes and accepting of his proposal felt so darn good too.

I’m sure at this point, most people were in the: “YES! It happened!” phase. Souma, who’s been the biggest YachiyouxSatou shipper, was ecstatic after all. Everyone else was pretty happy too, and a bit overwhelmed. Me? I felt worried. 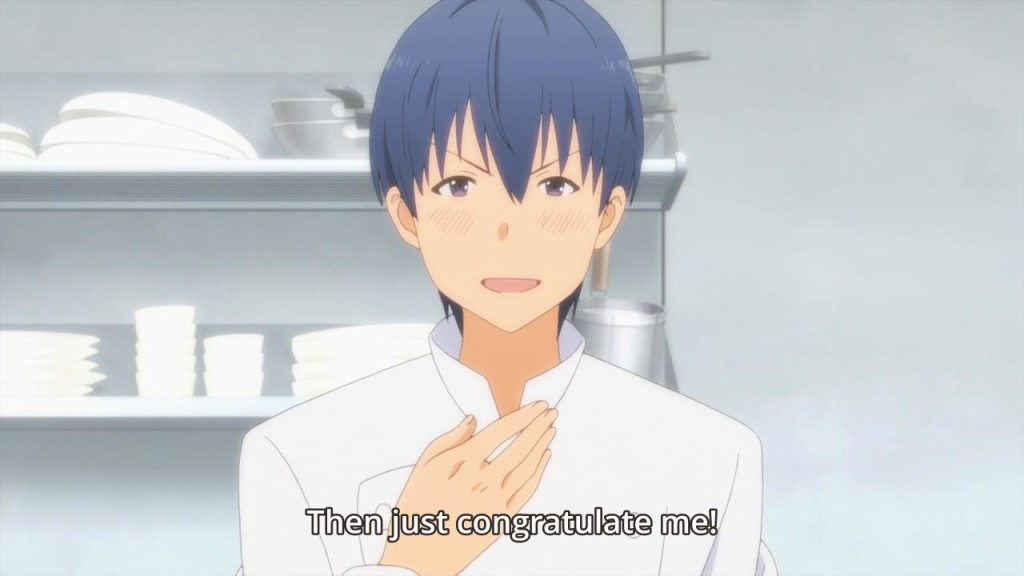 How you feel when your OTP becomes a reality! XD

I think this was the one time where I really related with Satou, though I confess I’ve never been in his situation. What I have been, is extremely nervous around someone I’ve liked, despite being a fairly open and confident person in general. Seeing Satou kind of break down from the nervousness of it all, and then even wonder if it was all real, was something that felt very natural and true to his character.

And I was right there with him. Until the episode ended, I was just waiting for the other shoe to drop, for Working!!! to take it all away from me with a cruel and painful joke. Yet… Thankfully it not only didn’t happen, but Yachiyou and Satou acted like a true team and power couple, navigating past every obstacle that came their way on the eve of their relationship’s start. 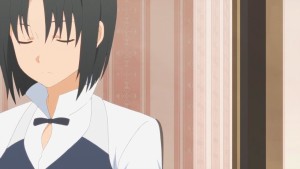 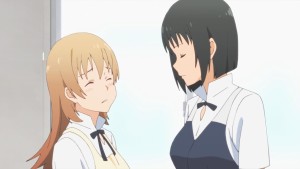 The first of those was Kyouko. Now, I gave Kyouko a lot of flack but I liked how she behaved here. For all intents and purposes, Kyouko is still very much an odd person. She’s not the best socially calibrated human being I’ve ever come across, but she does care about those around her. Her one-track minded approach to food would have you think otherwise, but Kyouko even realized that she might be in the way of Yachiyou’s happiness and eventual exploration of the “outside” world.

Its no secret that Yachiyou’s a pretty sheltered girl, and a lot of is thanks to Kyouko’s constant protection and dependency on her. And what really strikes me as spectacular, is that Kyouko actually wants Yachiyou to change and grow. Part of that is why she first opposes Satou, and then after the two get together, pushes Yachiyou away. 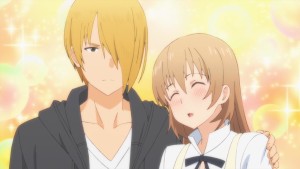 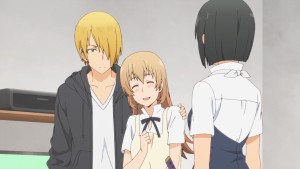 Of course no one would want to lose their friends after getting the love of their life. Its Satou, however, that actually comes in and saves the day here. I think he quite rightly points out that the girl that he fell for, is the girl that is so dedicated and close to Kyouko. He may not like it, but its a big part of who Yachiyou is, and he accepts all of her.

That is where Satou really shines I think, and what makes him so deserving of Yachiyou’s affections. He accepts all of her, her faults, her problems as well as all the more likable traits. He wants to experience life with her, grow with her e.t.c, but he DOESN’T want her to change too drastically, or be untrue to herself. For all of Satou’s faults, he’s pretty darn smart and mature when it comes to relationships. 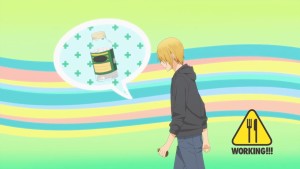 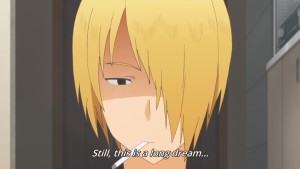 With the Kyouko issue settled though, Satou ends up taking some time off due to stomach pains. And lets not kid ourselves, the stomach pains are a new found stress of all the change that’s happened. As I said earlier, I really related to Satou’s doubts about it all. I too was wondering if what we saw was real.

And that’s where Yachiyou came in, saving the day. Rather than wait for Satou to just come back, she ended up going to him herself. Given who Yachiyou is, this is exceedingly darn impressive. So impressive in fact, that it actually takes the poor gal a few tries before she actually makes it to Satou’s house. 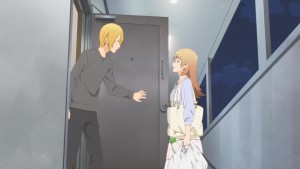 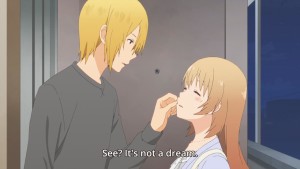 The moment the two share at the door, wondering if its all a dream is just wonderful. Its such an organic and powerful way to dispel all the fears of the relationship, and point out that yes: “it IS all real”. I think it was at that point, a good 18 minutes into the episode, that I finally dropped my guard.

Yachiyou telling Satou she loved him was just the icing on the cake after that. The dinner they have, and the fact that Yachiyou ends up having to stay at Satou’s because she has no idea about Subway schedules or money for the ride back, is a nice little bonus. Nothing happens obviously, but hey, baby steps! 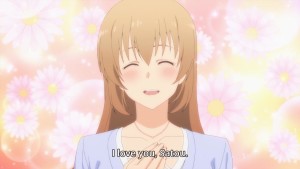 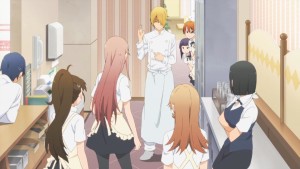 The episode ends with Satou coming back to work, and still looking pretty out of it. I don’t think Satou’s stomach pains are going to let up anytime soon, but I think having that pain is a sign that things are good.

Did I honestly expect to see what I saw this week? No, not really. Anime has long conditioned me to not see this kind of stuff, and its kind of revolutionary what Working!!! has done here. Satou and Yachiyou, their whole buildup to eventually forming a relationship, then forming it, and even seeing them start to go forward as a couple, we’ve gotten all of that, and the series isn’t even over yet! 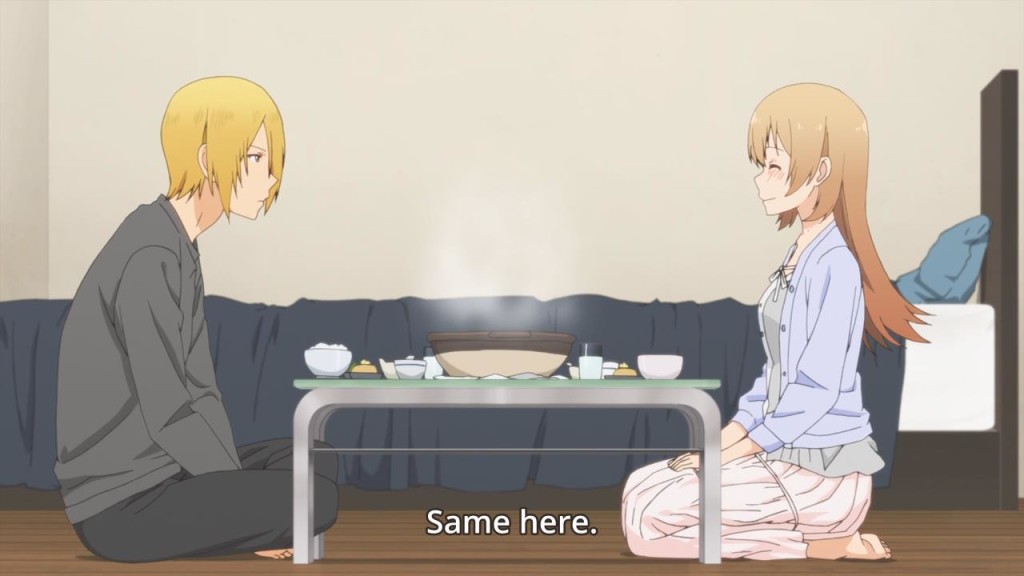 That means that, at the very least, we’ll see them interact as a couple for at least another episode or two. It gives us a sort of epilogue to the story, but it feels more real, more natural than that. Its just two people finally going out, and I think the fact that Working!!! can capture all of that so perfectly, is what makes this episode so darn great.

The last thing I’ll say before I go is definitely about Inami and Souta, our other couple that hasn’t quite gotten there yet. Its Kyouko again that gets things moving, lifting the ban from co-worker dating at the restaurant. While I’m sure that this is a great little push for the two youngsters, I do think that as a whole, that seems like a really bad policy change there XD 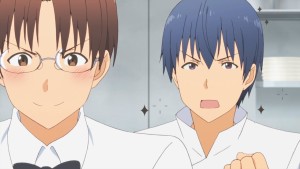 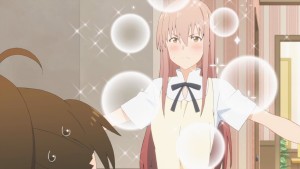 I think, the situation is a lot different in Souta’s case. He knows of Inami’s feelings, but can’t make sense of his own, and is clearly floundering. There’s the whole issue with his mother, but honestly, I think he’s just putting it all off. The fact that he ends up dressing up as Kotori-chan and coming to work, only proves how deeply off the path he’s gone.

In any case, one of Working!!!’s monumental tasks is very much complete, and its been done with a finesse and grace that put most other romantic shows to shame. Its worth mentioning in closing, that this episode didn’t have that much comedy. Did anyone care though? I certainly was too busy and too giddy to notice. If that’s not a hallmark of the best kind of entertainment, I don’t know what is. 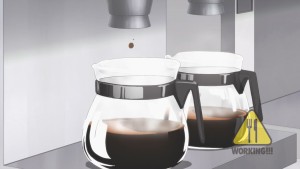 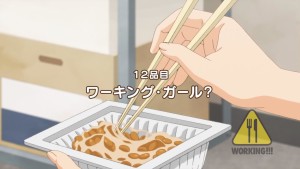 Seems like next week is actually going to be about Maya. I suppose she is the last side note to care of before the Inami/Souta main story. So we’ll see how it goes next week!