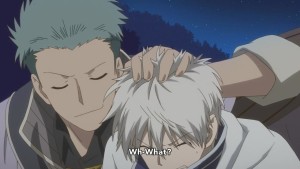 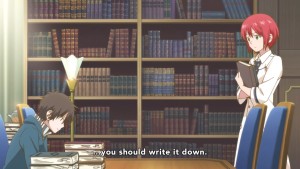 Well that certainly felt great, didn’t it? I suppose as the season winds down, a lot of the series are looking to end on a high note. Leading that charge are definitely Working!!! and Akagami no Shirayuki-hime, both having given us episodes and moments that just felt so darn satisfying. 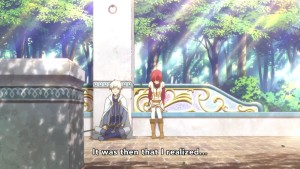 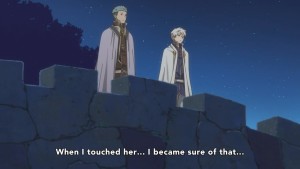 Its interesting to note that while we as an audience have known for a while that Zen and Shirayuki are both crazy for another, it was this week that they both realized it. Its kind of funny and cute that Zen thought that no one really knew that he loved Shirayuki and even more so, that Mitsuhide and Kiki weren’t aware.

I always find it interesting when characters have this big “epiphany” about the fact that they love someone, because it sounds so bizarre. When you have feelings for someone, its pretty darn obvious isn’t it? But in this case, I’ll give the show credit, it made the fact that Shirayuki was repressing her feelings pretty darn believable. 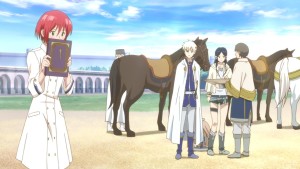 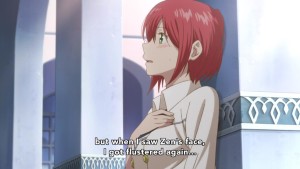 I think for Shirayuki, there was a pretty huge guilt factor involved with loving Zen. The issue is that she felt that wanting Zen was wrong. It felt wrong to openly admit it and confront it. And before someone goes and blames her for it, I’d say given all the social pressure she’s received and the gauntlet of pressure that Izana put her through, its pretty plain to see why she’d be worried about openly wanting and going for Zen.

Just last week, for example, we had someone try to take advantage of her because of her feelings for Zen. It goes back to the big fault and strength that defines both Shirayuki and Zen; they simply care for others above themselves. Shirayuki wanted to be Zen’s strength, to be of use to him, but not a burden. Its a very selfless form of love, but it only works if the other doesn’t dig you. 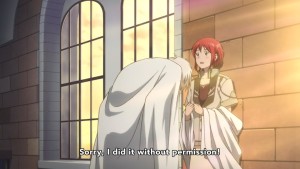 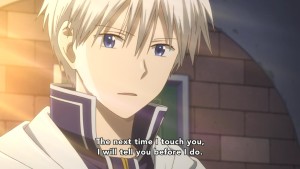 But Zen does dig her, and the kiss pretty much put it on the table. And I will mention that while I thought of it last week I didn’t mention the fact that Zen did kind of force a kiss on Shirayuki without her consent. My excuse, if you can call it that, is that I was just too caught up in the moment, and happy at the progress to notice.

Zen did notice, however, and apologized immediately after his senses came back to him. Shirayuki was obviously pretty shocked by it all, and fell silent, but not because she disliked it. Interestingly, it was Zen’s proclamation of him intending to seek permission the next time and then ask for her feelings on the matter, that cause the disarray. 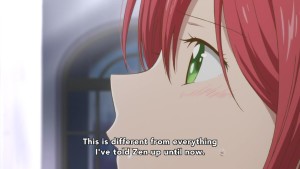 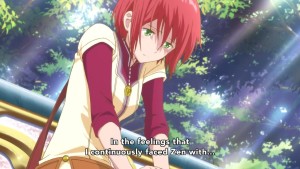 At some point, Shirayuki had convinced herself that her having Zen was not within the realm of possibility and that she had come to terms with that. The anguish she felt, afterwards, and the avoidance, was all so she could turn “off” her feelings and try and act like “normal” with Zen.

Shirayuki’s worries are a bit unfounded though, as she’s every bit worth Zen’s time and affections as Zen believes her to be. Even without Zen’s power, Shirayuki’s carved a place for herself in the castle. It was really nice to be reminded of that in the middle of the episode, and the bit with her, Ryu and Obi working on the tea was just great. 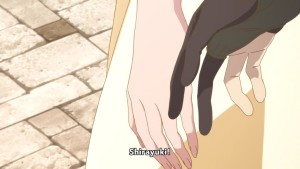 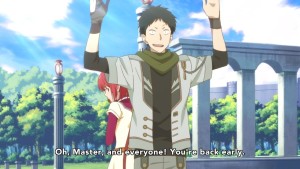 I suppose I should go ahead and admit I was wrong about Obi at this point. I’ll give it to everyone who figured it out, and read up on it. It was unmistakable this week that Obi does have some feelings for Shirayuki, even if he wisely pushes them away. Him almost reaching for her hand as she was distressed, It was painful to watch I admit. I guess a part of me just wanted him to not have feelings for her, because its a terrible place to be in.

Obi’s a fun character, and a very likable guy. He often serves both Shirayuki and Zen quite dilligently. Him having feelings for Shirayuki is just… Unfortunate. Its unfortunate because Shirayuki is interested in Zen, and Zen in her. He very much is the third wheel there. And given how much Zen and Shirayuki appreciate him now, its not like he can (or would even allow himself to) distance himself from her. 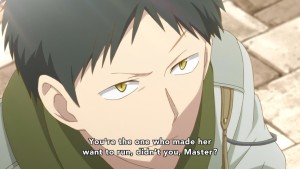 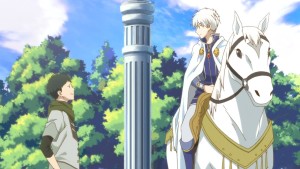 This is the one story beat that really bugs me about this show, but I think unrequited feelings are an unfortunate part of life. Ah well… Akagami no Shirayuki has a sucess rate of 99%, so that’s still pretty darn high.

Thankfully, the rest of the episode was a joy to watch. Shirayuki finally telling Zen her feelings, and the two of them deciding to go for one another, and progress to the next step was just great to see. It was organic, comforting and very much a team effort from the two of them. 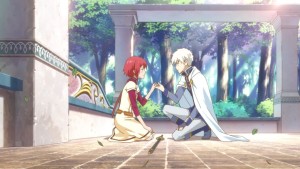 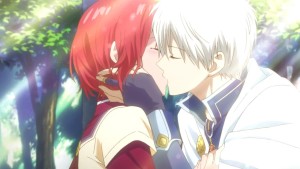 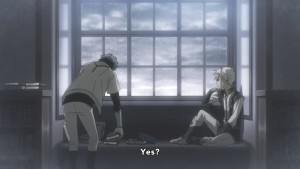 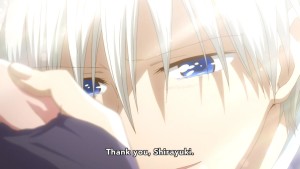 The kiss, totally consensual from both parties this time, was even more magical. The little flashback to Zen’s worries being accept for who he is rather than his position were the last piece of the puzzle. As Shirayuki told him her feelings, Zen’s worries and doubts all just melted.

The two are in it to win it now. They may have decided that they want to be together, Zen almost quasi-proposed to her after all. But the two of them wanting something doesn’t mean it’ll just happen. I suspect the real battle is now going to unfold, but I think the fact that Zen and Shirayuki are on the same page is going to be huge. 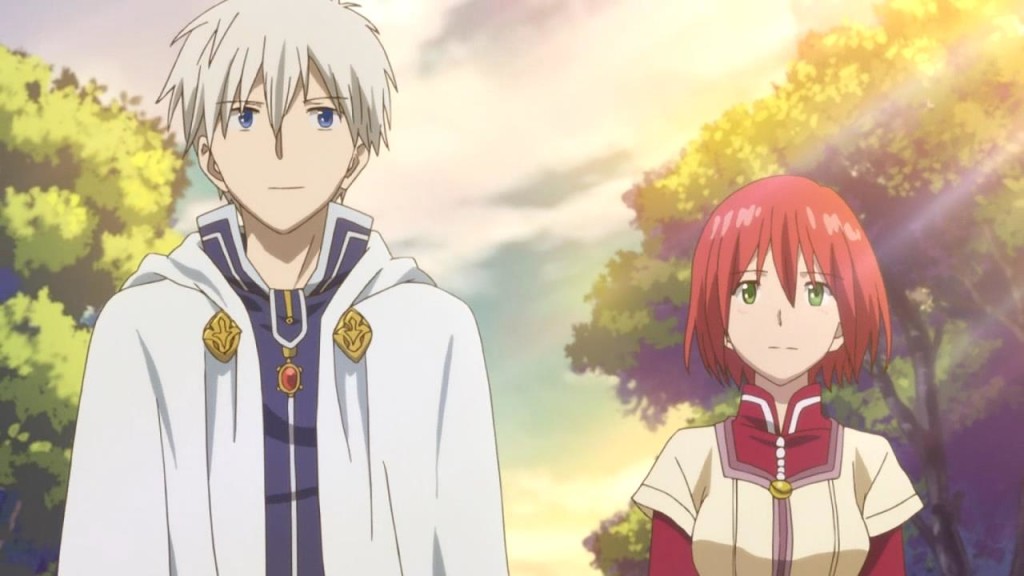 If nothing else, I’d say Mitsuhide, Kiki, Obi and the audience are definitely rooting for the two of them. The one question now though, is what we’ll get from the last episode of the cour before we go on a season break. This very well could’ve been the season ender itself, so I guess anything past this point is very much a bonus.

Man… First with Working!!! and now Akagami no Shirayuki-hime, I think I’m going to be spoiled to the point of not being able to enjoy most standard anime after this XD 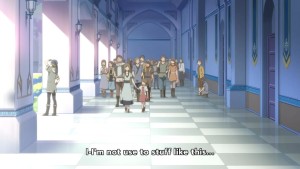 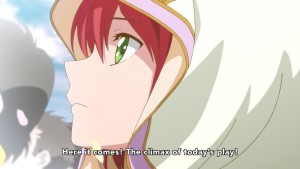 Open Castle Day! Sounds like a very Zen related scheme, but I do believe that things like this were known to be common place in castles and royalty. I mean, even the White House today has public tours so…