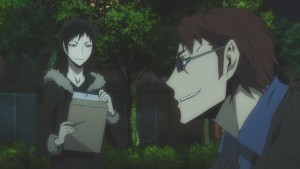 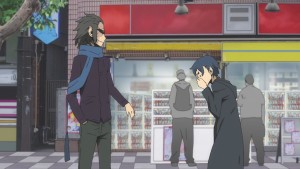 For all the build up and careful planning, the whole story focused around the Dollars is pretty cookie cutter isn’t it? I’m honestly kind of letdown by the fact that, at the end of the day, things are a lot more simple and plain than they seemed to be. 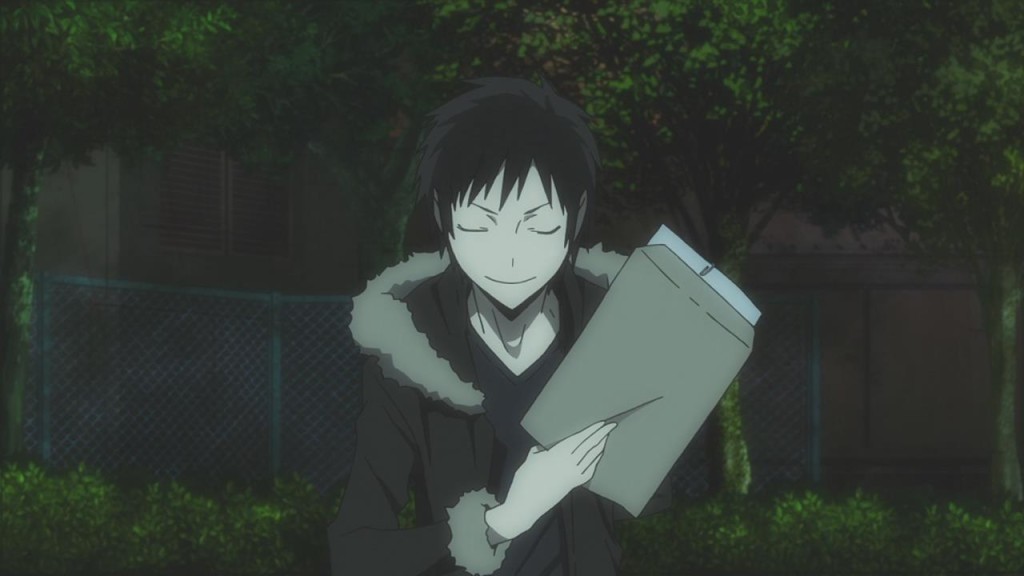 After two really solid episodes, it almost feels like Durarara!!x2 lost all momentum after that one week break. Stuff definitely happened in this week’s episode, don’t get me wrong, but none of it was even interesting, let alone as good as those two Izaya focused episodes.

The issue I think, is that Durarara!!x2’s big story point, is pretty dumb when you actually distill it down to what it is. Its basically all these different parties fighting over what the Dollars are and should be and trying to assume control of it to further their own needs. 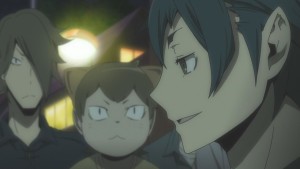 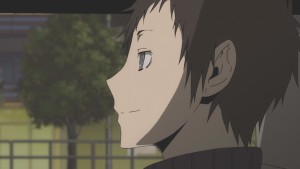 Lets break this down, shall we? We’ve got Mikado and the Blue Squares first of all. There’s actually two separate entities in this group, Mikado and then Aoba. Mikado wants to make the Dollar’s a “force” for good, making it so horrible people can’t take advantage of the Dollar’s network, its anonymity and what not. Aoba on the other hand, simply wants to take over the Dollars in a similar way to how Kida’s Yellow scarves were almost taken over. In essence, he wants to insert his blue squares group at the core of the Dollars, and potentially manipulate Mikado for his own ends. The question is, is it working? We don’t know quite yet.

Then there’s Izaya’s group, who are going completely counter to Mikado’s. Izaya’s goal is to simply have everyone, good or bad, be part of the Dollars. He’s kind of a choatic evil element in the group, causing disarray and just generally keeping the chaos going. Its pretty much what Izaya is at this point. 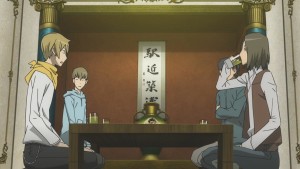 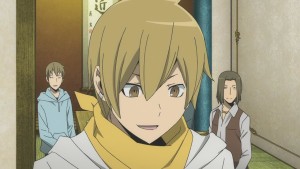 Next… We have Kida, moving to destroy the Dollars, and even enlisting the help of Kodata, Walker and the gang. He’s clearly caught on to what Aoba is doing, though I think he hasn’t accepted the fact that Mikado is a willing party in all of this. 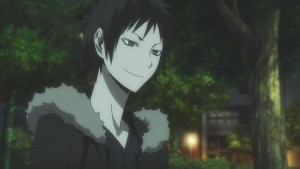 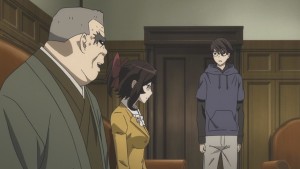 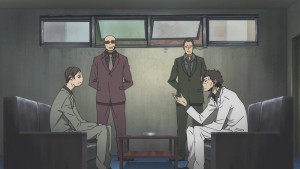 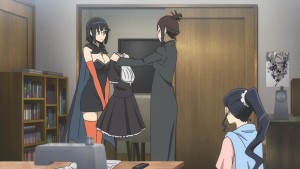 Its all a jumbled mess, with everyone kind of going around, doing their thing around this large entity known as the Dollars. Uptill this point, all these circles have more or less been operating independent of one another, and the tension’s been building.

The burst happens near the end of the episode, as Kadota is run over by a car, and put in the hospital. With this, first blood has more or less been drawn. It seems like Izaya’s group is behind it, particularly Aoba’s older bother (who unfortunately also narrated a good deal of the episode, and wasn’t really all that great at it). 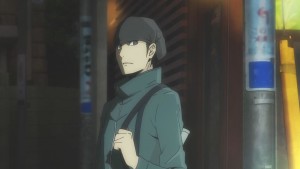 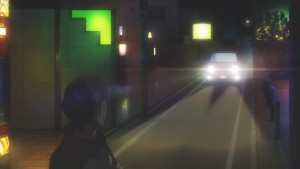 In any case, the pieces are moving… With Kadota down, everyone from Shizou to Anri has more or less been roped into this. Its interesting that the character that I’d say is the most good natured and noble of all the Dollars, and the one who seems to know nearly everyone in the cast, is the one that gets taken out.

But despite all of that, I can’t say I’m excited or even remotely interested. We’ve seen this story before, of a smaller group trying to bring turmoil to a larger one, with the Dollars and Mikado being at the center of it all. In many ways, it seems like a remix or a repeat, and not a particularly novel or fresh one. 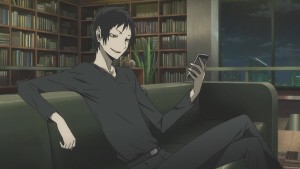 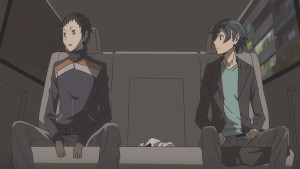 Personally, I hope there’s more to it than that. Simply having Mikado and Kida switch roles, and go at it, with everyone else kind of doing their own things in the background, honestly doesn’t sound very interesting. Its not just the conflict itself either, but the trigger that’s the problem. Kadota getting attacked isn’t all that impactful either, because him being in the hospital doesn’t particularly change anything. Had this been a character death, perhaps things would’ve been more poignant, but who knows right?

That’s the other issue with Durarara!!x2, its too attached to its characters. No character is ever in danger of “bowing” out of the story. At the end of the day it feels like real change is never going to happen. There’s just going to be another reshuffling, at least from the looks of it. 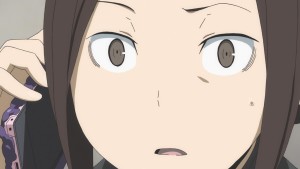 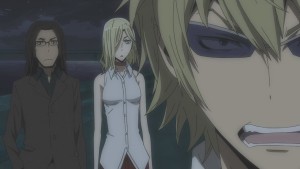 Its unfortunate, but at this point, 22 episodes in, I’m pretty confident in my thinking that Durarara!!x2 just isn’t very good. There are parts where the good old Durarara!! charm shines through, but those parts are few and far between.

Hopefully I’m just completely wrong here, and Durarara!!x2 somehow recovers in the next 2 episodes, but that seems pretty unlikely. Ah well, might as well ride this out till the end, right? 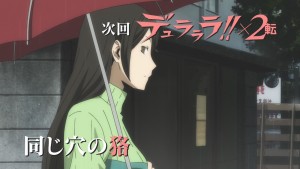 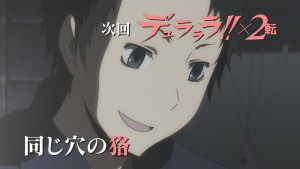 Kadota’s hospitalization sends everything spiraling out of control… *yawn*