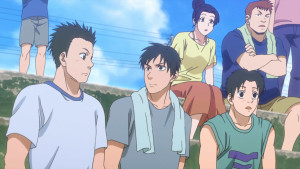 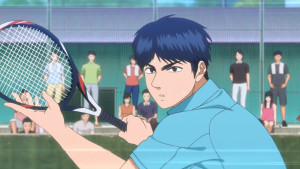 So the final match of the season continues and it sure is a tough fight for Maruo right now. You can see him giving everything he has and struggling to find a method to overcome the wall that is Nabae. You knew it couldn’t be an easy match to win, but this episode just shows how utterly difficult it really is. Nabae in his serve game is nearly unstoppable and Mauro is fighting desperately just to hold his own serves.

This was an episode that really showed how Maruo will struggle to win, but if he can it will be amazing. Nabae takes that kind of analytical style to another level, able to really change his game depending on who he is up against. Maruo despite doing heavy analysis still has a style that he wants to focus on and win with. Will be interesting to see how Maruo finds a way to combat this. This episode shows that he can make some poor choices on how to advance and have to learn from that. 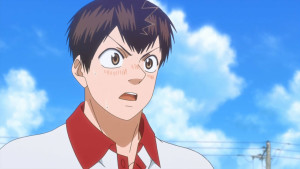 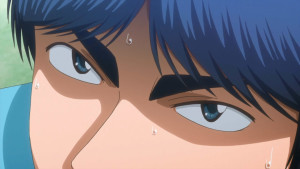 Trying to force himself into the zone really didn’t do him any favors. In a sense he had a good deal of aggressiveness, but he knew that part of his success was just that Nabae wasn’t trying to force a break. He has to consider his stamina and not just play at 100% the whole time. The zone is a good tool and being in that kind of ideal mental state can make or break a game. But….you can’t just count on it. That’s just counting on magic to save the day. Life just doesn’t do you that many favors. At least he had enough of a lead that he could afford to make some mistakes and try some things out.

The only issue is that he ends this episode with basically….no plan. It is true that sometimes you just have to stand and fight and try to win. But…it’d sure be more comforting if he had some kind of tactic or strategy that would lead to that win. Right now all Maruo can do is throw every bit of experience and effort he’s gone through over these two seasons at Nabae. Maybe it won’t be enough, but damn it he’s going to try XD. Sometimes just bringing everything you have against someone will make a difference. Heck, that kind of determination just may put him in the kind of ideal state he needs to be in right now. 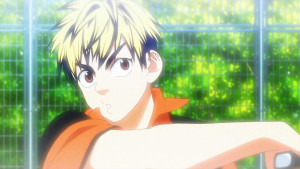 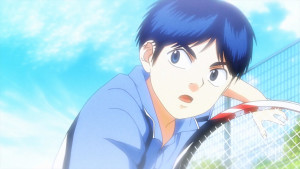 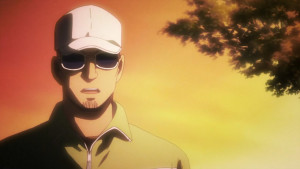 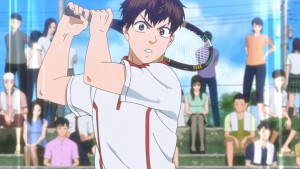 Again we got more focus on Nabae’s past and how he got to where he is. Nabae really has worked to control his rage and that is an interesting little tactic for doing it. Putting all the ugly feelings and frustrations into the ball and then letting the opponent just smash them out of the court. Let’s face it, for someone as good as Nabae one point is nothing. In exchange for controlling his emotions and playing in as close to an ideal state as he can….that’s a beautiful thing. So much gained for almost no cost. While I’m sure Maruo would love to stop that kind of thing….how exactly do you? You need to score points to win and it’d be a goofy game if both sides were just not trying to score a point there XD.

All the more reason why these matches are extremely entertaining is that you get insights into strategy. Nabae breaking down how he viewed Maruo’s reckless tactics was interesting as well as the breakdown on that drop shot play. Maruo saw it one way, while Nabae saw it as a loss for him. He got too caught up in winning and took a risky shot that he didn’t need to. Just hitting it back to Maruo’s feet would have given him time to bounce back and rebound. But even the best players can’t hit the best shots and make the right choices every time. That turned this into an interesting match where one set will decide the whole thing. 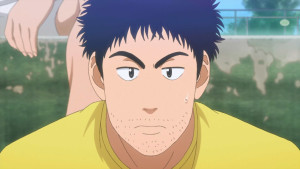 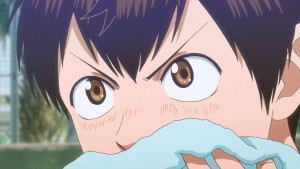 Overall I thought this was a great episode and really moved the showdown along. It will suck to say goodbye to this series since it’s been such a good ride. But….sadly that is how it goes. Here’s hoping Maruo finds the ability to win and we can end this on a strong note. Although so long as he pushes the game as hard as he can I think we can walk away with a smile regardless. Now the really tough thing is hoping we can get a third season at some point since I want to see this story continue to be animated.
Score: A