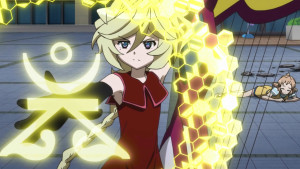 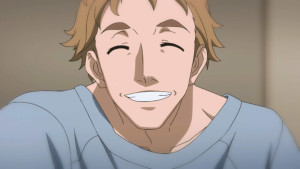 I’d say this episode was definitely a good payoff for Hibiki’s character arc this season. This has been built up to for a long time so it definitely felt nicely paced. In the end I always felt that Hibiki’s father was a very mixed individual, which as people tend to be. He’s a coward, but he’s a good guy, he’s a bit stupid, but he knows how to play up his cowardice for the benefit of others. I don’t think someone running out on their family should avoid getting a heavy amount of criticism, what he did was a terrible thing to his family. But, part of life is the potential for some redemption and I think he’s on the road to that. He’s a character who recognizes his flaws. At least unlike some terrible things people have done, he has some hope of coming back from it and at least trying to be a part of the lives of his loved ones again.

Honestly, I’m not even sure which parts of his cowardice during the Carol scene was real or him trying to get to Hibiki’s gear. It’s not like he knew for sure that was going to turn the tables, just that it was important and Carol didn’t want Hibiki to have it. I’m sure he was legitimately freaked out by all this. I mean some crazy girl comes down and starts blasting away at him and his daughter….that’s legitimately scary stuff. Either way he did step up when it counted and pulled Hibiki out of the way of that first blast. He may be a chicken, but he’s not an idiot. Hibiki should know better than trying to tank that attack again. Her father didn’t even need to see that thing once before deciding they should avoid it XD. The guy had his bad moments to be sure. His own daughter admitting to digging to find the courage just to meet with him while he couldn’t even call his wife on his own. I think he finally realized that he couldn’t afford to lose Hibiki again and risked it all to make sure she was at least safe. Maybe seeing Hibiki’s fight in these episodes will help give the guy a kick he needs to struggle to live up to being her father. 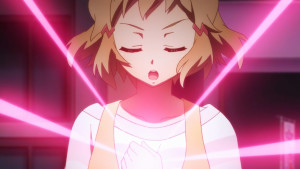 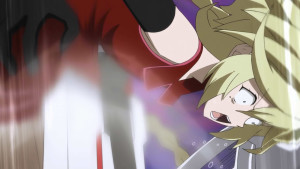 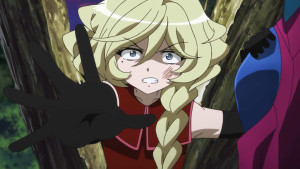 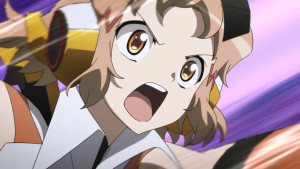 This did basically conclude the arc Hibiki had been building up this season. We knew from the start that a big issue for her was going to be accepting her dad, warts and all. The truth isn’t always as crystal clean as we’d like. What was good was that her father wasn’t some secretly good guy like Tsubasa’s father. He is a flawed guy that when pressure came at him….ran. But that doesn’t mean he can’t still be someone she loves and someone she wants to protect. You knew almost right away that he did give her the “It’s alright. Everything is just fine” (which really does sound better in Japanese). That phrase just supported her a lot over the years even going into the actual show itself. I like them taking one of Hibiki’s little catchphrases and doing something with it.

Hibiki finally found something passed to her and that was enough. Even if her father ran out and even if he is now kind of unreliable…he’s still her dad. There is enough good there for her to still love him. Those words did keep her from falling apart in the past. In the present she did just see her dad who was probably scared out of his wits, struggle and fight in his own way in order to give Hibiki the chance to fight back. Even if the man himself failed at times, what he gave to her did help protect her.

I will also say that Hibiki’s second song is another good one. The show regardless of any flaws has had some of the best music in the series (at least in my opinion). Hibiki finding the strength to stand up against Carol and really deliver some crushing shots. Despite her being the girl without any armed gear….she can pack a pretty tough hit. Says something about Carol’s durability that she could take those shots and still keep moving. 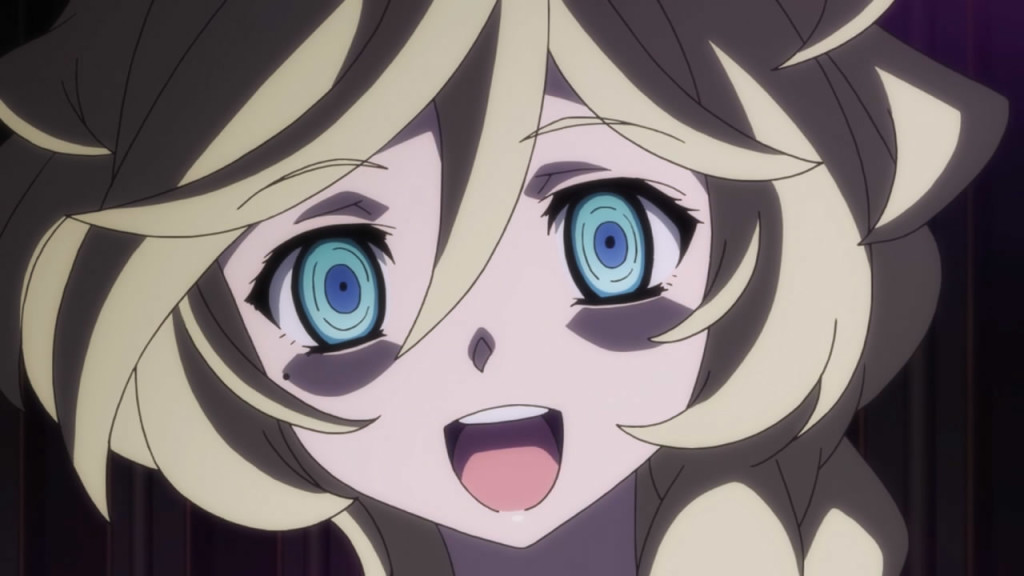 Yeah….this isn’t the face of sanity

This episode definitely showed how far gone Carol is. I think the most redemption she’s getting is still ending up dead. In this episode they just showed how far she was willing to go in order to accomplish her goal. As expected things aren’t going well for Ver right now. The fact that he’s possibly alive is more than I expected though. Since we didn’t see a corpse….anything is possible. Either way the idiot pretty well went on a mad speech and Carol just had enough. Of course she never intended to let that guy live, just use him to finish her preparations. I suppose the chance he’s still alive is so he might be able to help shut down Carol’s castle. Either way he was pretty dumb to risk everything and piss off someone who was planning something as insane as dissecting the world.

In the end Carol’s plans are just tragic. She’s going to dissect the world, find out all the truths….and then do nothing. Carol….is insane. You could just see how utterly broken this person is. Having constantly transferred her memories from one body to another over the centuries. She’s taken her father’s ideal of knowing all he can about the world and his message for her to live and find out more….and gone to an insane extreme. She should know her father wouldn’t want her to destroy the world just to find out more about it. All she plans on doing is finding out all she can….and that’s it. She won’t repair the world, remake it, or do anything. She’ll just sit on that information for eternity. In a sense Ver’s ramblings were right. All she is doing is what her father asked…never going a step further, just fulfilling the dream she was given and nothing else. 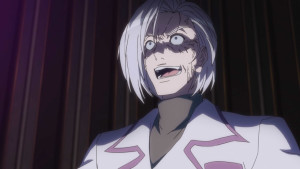 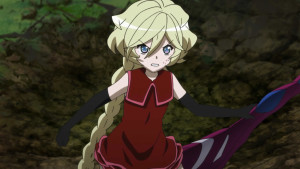 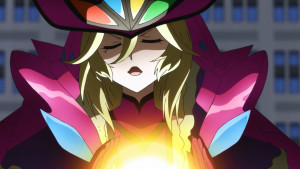 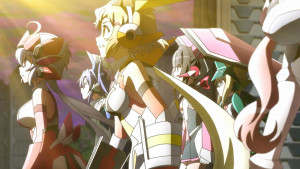 Who knows how many Carol and her Autoscorers have killed to this point, but it’s got to be a fair amount. She tried to add to the total by killing Hibiki’s father…but luckily everyone arrived in time to prevent that. Carol messed around for too long. If she wanted to kill the guy she had more than enough time. Luckily she got cocky and wasted that time. Not that she didn’t have reason to be confident. Without a gear she had all the time in the world to break Hibiki’s spirit before killing her. But probably it was more that she just screwed up. Carol has planned things out pretty carefully, but she got caught up in her own reaction to seeing Hibiki with her father.

Although with the way this episode ended…she has reasons to be confident. I’m not sure if that power-up is solely because of the cursed melodies she collected, but regardless she has the power to fight all those gear users on her own. Able to be in a state where she can abuse Swan Song level of power. At this stage they either need to play into Carol’s hands and abuse the Ignite Module or find a way to enter X-Drive mode and even the playing field a bit. Right now…things are looking very bad.

I’ll also note that Carol is likely the last one with a character CD and it makes sense why here. Her song just reflects her twisted mindset perfectly. It’s basically a love song about genocide….scary stuff. It was actually a really good song though, so I’m all for adding a few more songs to the mix. This show is great at the surprise songs. While last season had Miku, this song from Carol kind of equaled the creepiness while adding a scary element. With Miku you knew at the core her desire to protect Hibiki from fighting was in there (mixed up with brainwashing), but Carol….you get the feeling she is really in love with the idea of killing everybody. 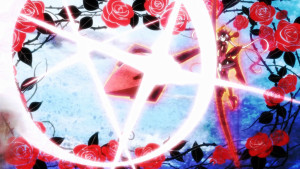 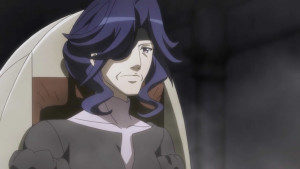 I will say that the series really feels solid entering the climax of the story. The situation with Hibiki’s father was handled really well I thought and set things up for a big finish. It started off well also having Chris who was still using the Ignite Module just blast away Lieur’s little sister in one shot. You can’t expect anything less from Chris or Symphogear than that. A girl flying out of a missile and firing an arrow that turns into a giant missile XD. Got to love the way this show is willing to go all out. The end of the episode was surprising with the appearance of Professor Nastassja. But I don’t think she’s been revived or anything. The first episode showed her corpse being brought back to Earth. At best…I think it’s some kind of illusion by the Chateau. Something to mess with the heads of intruders so they won’t be able to advance. Regardless, I can’t wait for next week and seeing how this last battle continues.
Score: A+