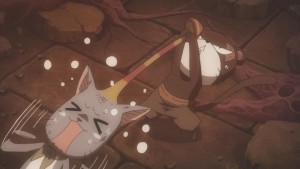 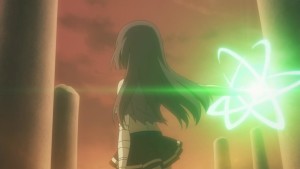 You know you’ve got a problem when a character in your own story questions the point of a battle they’re fighting. Unsurprisingly, an episode that focused on Minerva didn’t entice me all that much, no matter how good of a note it ended on. Thankfully, there was more to this episode than just Minerva. 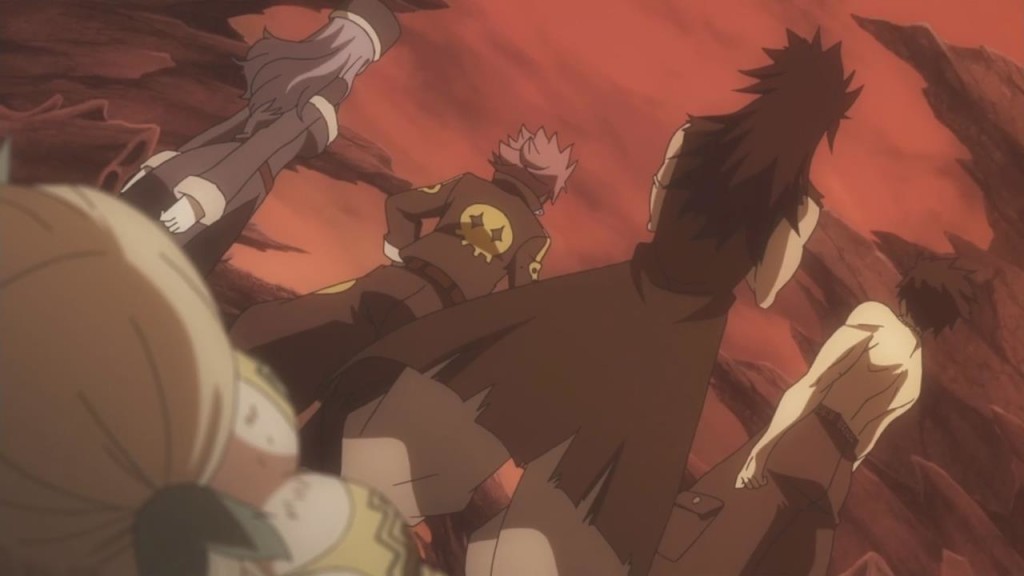 The first half of the episode was undoubtedly where the more interesting stuff happened, and it was mostly setup for what we’re going to get in the future. I think its worth stating that Fairy Tail really does handle setup quite beautifully, and often will really build excitement towards the future with a grace and skill that is uniquely its own.

Its actually from the setup alone that you can tell whether a story beat will be interesting or dull. The upcoming battles, for example, look really exciting. The highlight of those, is obviously going to be Gray versus Silver, which the Tartaros arc has been slowly teasing up till now. First it was Natsu, and now Gajeel, Both have likened Silver to Gray, in that they smell similar. 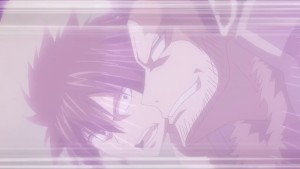 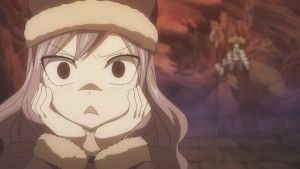 How is Gray related to Silver? I think that’s coming fairly soon, and I’m pretty interested to see what Mashima-sensei has prepared for us (coming next week). The rest of the gang, on the other hand,  are busy having a three way battle royal with the rest of Tartaros’s demon gates.

I actually never imagined that we’d see the three way combination of Natsu. Gajeel and Juvia, but hell I’ll take it. I think the last time we had a meaningful team battle was when Natsu, Gajeel and Wendy took on the King in Edolas. Hopefully this is another team battle that can be lauded over, because team battles I think are something that Fairy Tail and Mashima-sensei do fairly well. The Lucy, Flare and Wendy battle from the last arc was pretty great, after all. 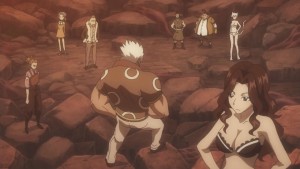 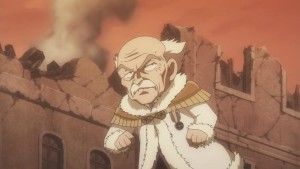 Beyond just our main fighters from Fairy Tail getting ready to tussle, however, there was also movement on other fronts. Makarov went back to “release the light” at Fairy Tail’s headquarters. I think we’re getting close to also learning more about Lumen Historie (which the recent Grand Magic games arc touched on), so that should be pretty exciting.

We also rejoined the surviving Wendy and Carla, and got back into our familiar pattern of “Fairy Tail can’t catch a break”. In this instance, while Wendy and Carla survived, and were able to take down one Face and a Tartaros Demon Gate, their effort was more or less negated by the fact that there are another 2,000 of them. Talk about a twist there… 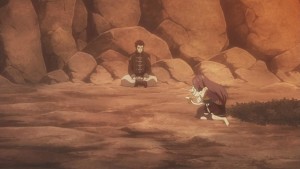 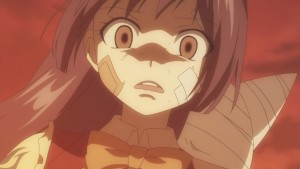 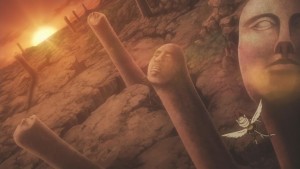 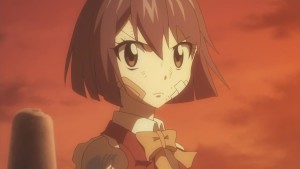 In some ways I can’t say I was a huge fan of the whole “there are actually a lot more Faces” idea. It kinda renders all the buildup and excitement of the previous half of the arc kinda moot. I think Wendy reacted to the whole change of events a lot better than I did. I admit, her cutting her hair and being determined to face the next challenge was inspiring to see though. Wendy may well be growing into something as endearing and capable as our main man Natsu.

And speaking of survivors, it seems that Franmalth is still alive, as a mushroom on Happy’s head no less. Again, this isn’t something I’m particularly fond of, but I’ll give it to the show for the comedy. The scenes with Happy and Lily was pretty funny. Lily also seems to have an obsession with Kiwis, which is a nice little character note thrown inside all the other chaos that’s happening in this arc. 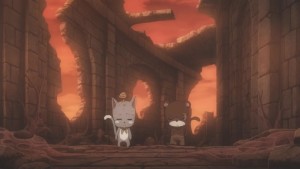 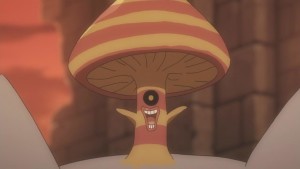 But all of that was more or less half of the episode, so what did we get in the other half? A pointless battle between Minerva and Erza that more or less served as an excuse to develop Minerva’s character via flashbacks. The problem was, I didn’t find any of it particularly useful or endearing.

We were already aware of the fact that Sabertooth’s master was bat-shit insane, crazy and an all out disgusting human being. Its not surprising that Minerva had a pretty messed up childhood, and slowly had any humanity and kindness eradicated from her. It made sense that Minerva turned out the way she did, but I still couldn’t get behind these scenes. 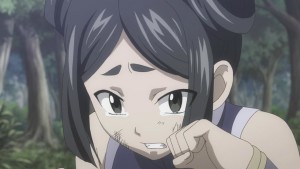 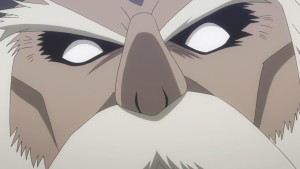 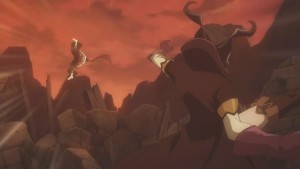 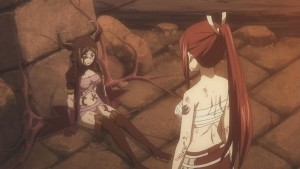 It felt like the point of these flashback scenes was to give us a reasonable excuse for how petty and terrible of a person Minerva is. How she wasn’t always that way and it was her Daddy’s fault. Mashima-sensei’s done that before, but he’s at least always had the characters come to terms with the fact that they’ve done bad things. They’ve largely suffered and paid for their crimes, and continue to seek redemption.

That’s true for Laxus, Gajeel and especially Jellal. They don’t let their pasts excuse their behavior. Yet, it largely felt like that was exactly what the audience was being led to believe here. Minerva’s worth saving, she’s not all THAT bad. Yet, even after all those flashback scenes, I felt about as enthused about her as I would a pet rock. 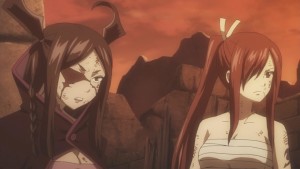 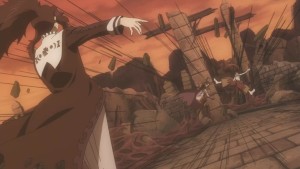 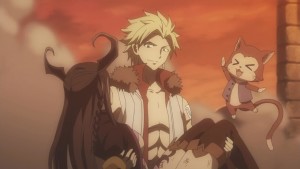 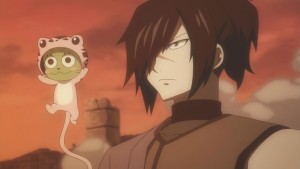 It felt doubly unfair then, when Sabertooth’s Twin Dragon Slayers Sting and Rogue ended up coming in and saving her from Mard Geer when he attacked both her and Erza. In essence this did two things. First it gave a character that’s done nothing but terrible things a reward that she clearly didn’t deserve. Second, it more or less rendered all that buildup and hype to the Erza and Minerva battle useless.

I wasn’t particularly enthralled with the idea that Minerva was worth fighting to begin with, but this more or less just felt like every scene with Minerva was just a waste. It was all so she could have her comrades come in and be nicer to her than she deserved. 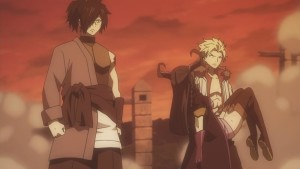 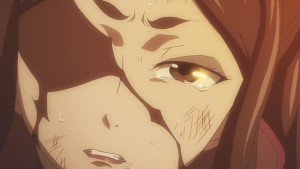 The silver-lining in this is that Sting and Rogue are indeed here, and now active participants in the battle against Tartaros. I like Sting and Rogue, so I’m glad to have them join the fray. Having said that, I’m not sure how useful they’re going to be against Mard Geer. Oh yeah… by the way, Mard Geer is back. The little pertrification that The Seirei Ou did on him lasted all of a few minutes it seems. So there’s that I guess.

At the end of all this, I wouldn’t call this a weak episode. If anything, it felt like a transition episode. Some of the plot twists didn’t sit as well with me as they usually do. Nothing was predictable though, so that’s nice at least. At the very least, we’re done with this Minerva stuff, so we can kiss that good bye and focus on the other, important stuff in the coming weeks. 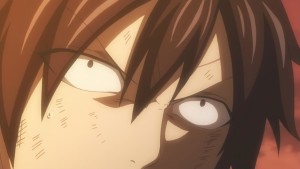 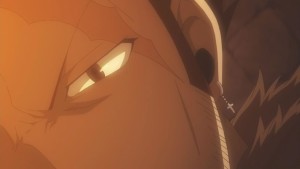