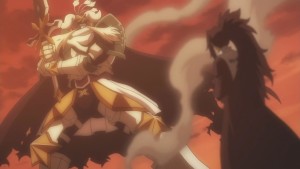 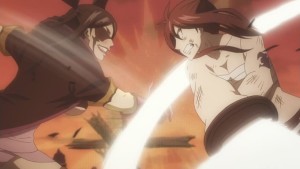 If last week was the saddest episode of the arc, then this week was the most satisfying, feel good “pay-off” episode we’ve had yet. I said that last week was a tough act to follow, but I’d say that given the challenge, Fairy Tail did pretty darn well for its self. Our heroes have suffered enough, and gone through some really tough times (especially Lucy). It was just great to see her sacrifice, her strength in the most desperate of situations finally be rewarded with some success. 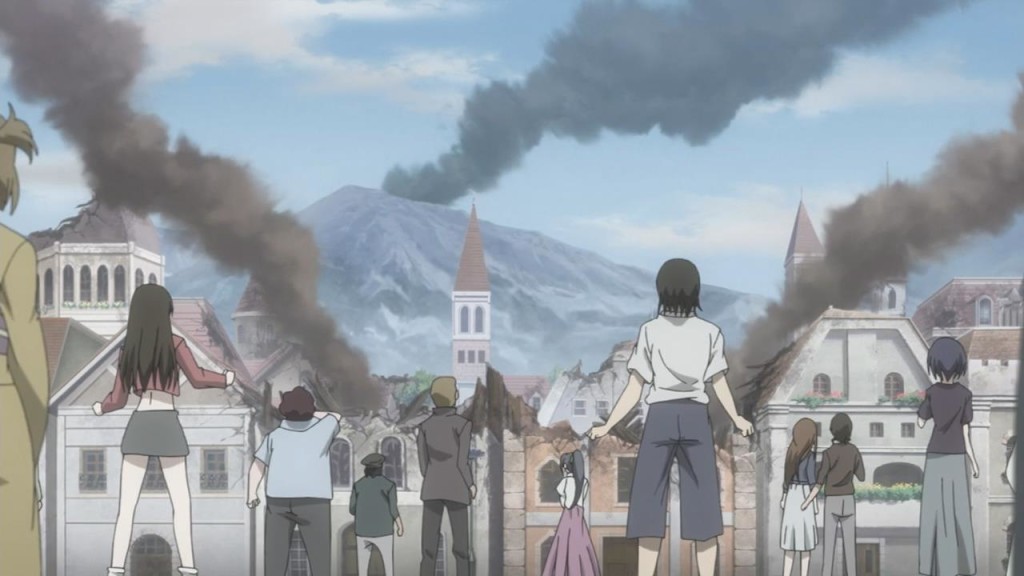 No matter what the situation, Magnolia always gets trashed when Fairy Tail’s involved XD

In some ways I’d say this episode marks the turning point for the arc. Its the first instance where Fairy Tail’s been able to amass a solid victory after sacrificing so much at every step to battle Tartaros. Lucy succeeded where Laxus and even Wendy failed, and not only saved the day, but dealt a decisive blow to Tartaros, putting the odds squarely in the favor of the good guys. While this was a bittersweet victory in that Lucy lost her most cherised Celestial Spirit forever, I’d argue that the payoff at least didn’t feel like it was cheap. While I can’t ever say that “the sacrifice was worth it” at least it didn’t feel like it wasn’t.

The Celestial Spirit King showing up was just about as cool as you’d except, and his strength near infinite. What was perhaps, the most interesting revelation of the episode though, was that Mard Geer and the Celestial Spiring King (the Seirei Ou, which lets be honest, sounds waaay cooler) knew each other. It seems that they had even battled before, under a different set of circumstances but for more or less the same stakes. 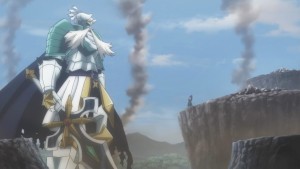 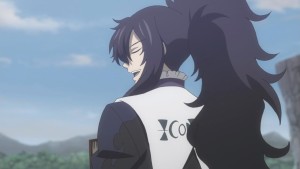 I’m curious as to how the Seirei Ou was summoned into the world before. Was it Lucy’s mother? Was that how she ended up losing her life? It could very well be possible, but it could be ages ago. What we do know is that whenever the two Kings last met, it was after Igneel had dealt with END. The Seirei Ou remarks that Mard Geer still craddles “that book” referring to the book that contains END’s soul.

But once the pleasantries were exchanged, I loved the rage that the Serei Ou displayed. The words that I think actually did it for me were: “For such a Reason? For such a reason my Tomou (which I guess could be translated as Old friend) is crying?” 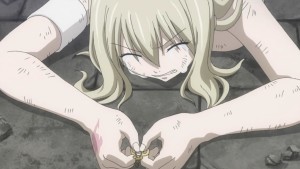 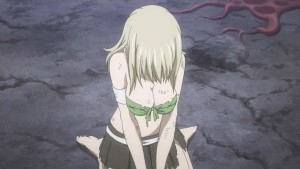 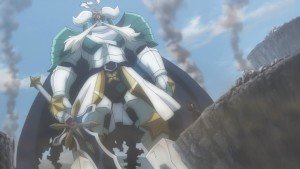 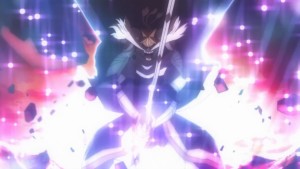 Man, I concur, what made it worse perhaps, was the fact that Lucy was still in shock, on the floor, crying her eyes out at the loss. Still, the battle had to rage on and Mard Geer and the Seirei Ou went at it. If there’s one thing that was a bit of a let down, it was that the Serei Ou, for all his strength and power, didn’t actually dominate over Mard Geer. While it was clearly evident that Mard Geer was the weaker of the two, he was able to accommodate for his lack of strength with speed and his small size.

But the battle between the two Kings wasn’t a physical one, it was a philosophical one. It was light versus Dark, as both were otherworldly beings that weren’t entirely human. In the end, it all came down to Lucy, the human that had lost so much and had everything to gain from this battle. 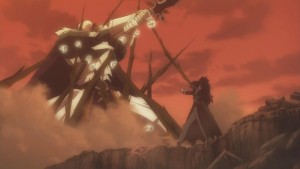 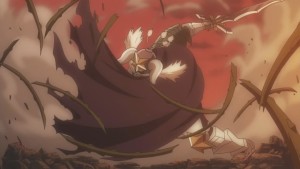 Last week I said that the most important part following Aquarius’s sacrifice was going to be how the show dealt with the aftermath. To Mashima-sensei’s credit, the best way to follow up a sacrifice like that was to indeed, honor it and have it influence a positive change in the story. I think the most painful and hard to swallow sacrifices are those that don’t really amount to much.

That’s one of the reasons that the end result of Laxus’s battle at the start of the arc hit so hard. For all that he did, he wasn’t even able to save the people he had sacrificed himself for. But with Lucy and Aquarius, not only was the Serei Ou summoned, but Lucy got to bite back at Tartaros. 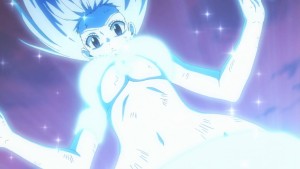 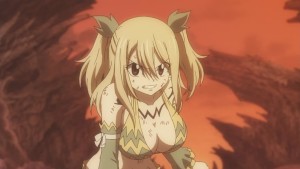 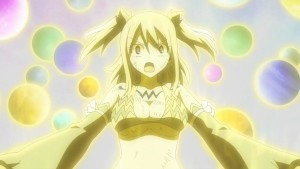 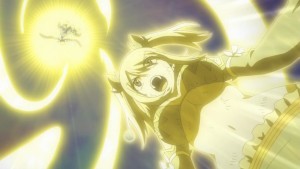 Using Aquarius’s left over magic to power Lucy’s ultimate spell was just… genius and beyond satisfying to see. I think I got a collective dose of the chills as Lucy recited in the incantation for the spell, and then just hit Jackal with all of it. And it marked the first time that we were able to see Urano Metria in action, and boy is that a friggin powerful spell. Its enough to one hit kill a frigging Nine Gate Demon from Tartaros!

But, if there was one thing I’d say that kind of disappointing me, it was that the power up that Lucy received from Aquarius was temporary. Given what she went through, I would’ve been with her getting a power permanent power boost and becoming one of Fairy Tail’s monster class Mages alongside her comrades. Sadly, after Lucy had taken out Jackal, Aquarius’s mark vanished, and Lucy tumbled to the floor. 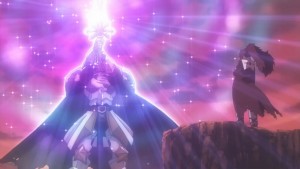 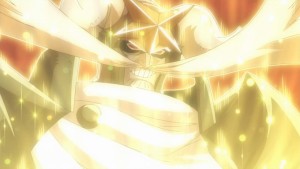 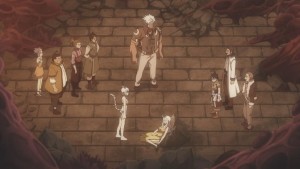 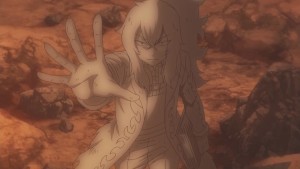 But its here that we went back to the whole Philosophical battle between Mard Geer and the Seirei Ou. As Lucy collapsed from expending all her power on Jackal, Mard Geer rejoiced. For Mard Geer that was the one weakness that the Seirei Ou has, his dependence on his summoner. But, while I’d tend to agree with Mard Geer in terms of practicality, I’d be damned if I didn’t admit that the Seirei Ou’s speech about love and about the connection and bond between Spirit and Human being a strength didn’t win me over.

And while the Seirei Ou can’t use all his power to finish Mard Geer, he pulls the ultimate Troll and Feint, releasing all of Fairy Tail while simultaneously petrifying Mard Geer himself. By prioritizing his “old friends” over the destruction of his “old enemy” it was the Seiri Ou that pulled out the ultimate victory as he faded back into the spirit realm. 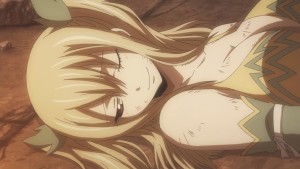 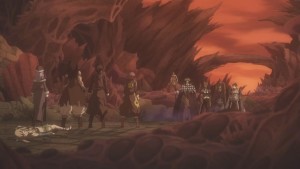 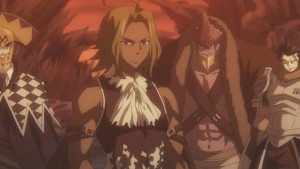 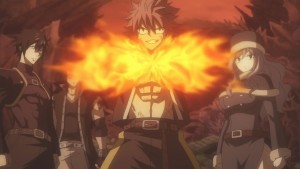 And of course, once Fairy Tail was freed, we got one awesome moment after another. With Lucy defenseless, she saw one by one as the comrades that she had rescued came in to save her and protect her. Gajeel coming in to block a fatal blow, then Juvia coming in to block the next, then Gray and then finally Natsu… Man, if you weren’t excited at all of that then I’d question your reasons for watching this show.

So… with all of that said, Mard Geer is out of the picture, and all of Fairy Tail is back in action. Erza and Minerva are about tussle, Gray and Silver are ready for a showdown, And of course, Natsu himself is ready to rumble. I think the scene with Natsu slamming his fists together, and the two groups staring each other down, was the perfect way to end this episode. Now the battles begin, and its time to sit back and enjoy Fairy Tail’s domination of Tartaros. Hell if it hasn’t been earned at this point. 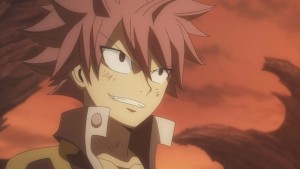 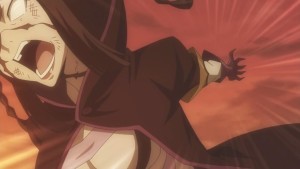 Minerva and Erza? I’m not entirely crazy about this battle, but lets get it done and over with. Hopefully we’ll get more than just their fight next week.