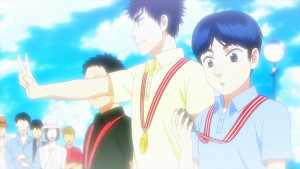 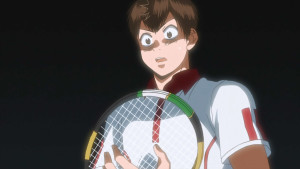 And so the match begins….mostly next week XD. This was an in-between episode that I actually enjoyed quite a bit. We got to catch up with Natsu, make note of the importance of their relationship and get some more information on Nabae. In a sense Nabae has been this big mystery since we only really knew that he was incredibly good. This is someone who did beat Takuma in some matches. Now one could say the last one was partly because Takuma hadn’t gotten into top form yet, but there are no excuses. On that day Nabae had the better strategy (shake him up by playing like Ike) and was just playing really good tennis on top of that. Now we got to see that Nabae didn’t start out like this and it is in part because of his strong will to win that he has grown this much. I think people can relate to having a temper and seeing that in Nabae was interesting.

This was a good chance to just take note of his accomplishments. I do wish that his parents would come and see him play a bit. All they have is updates which just doesn’t get across the incredible thing that Maruo has accomplished here. A kid who started in highschool (part way through the year) has suddenly become one of the top 4 players in that region. Heck in their smaller area he is a top 2 player with Araya being around his level (either could win depending on how things went). This is just crazy. His growth has been amazing and it takes someone like Nabae to really make note of that. I enjoyed how he and Takagi kind of dissected Maruo a bit just to note that he won’t be an easy opponent for Nabae. Nabae has a strong will to win and beat someone with incredible growth like Maruo, so both sides will want this game badly. 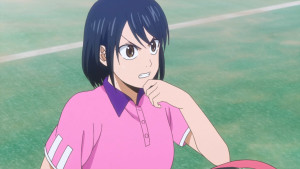 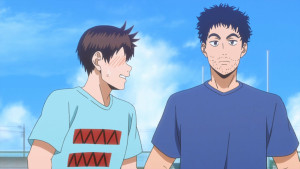 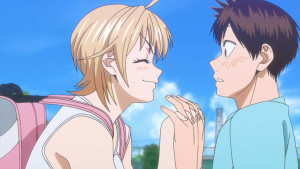 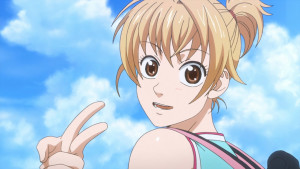 My favorite parts really did involved Maruo and Natsu. It’s just a very interesting thing having a main couple in a show growing together. We don’t see a lot of Natsu’s games, but it’s clear she’s getting better. She just crushed the one person people thought might give her some trouble in this tournament. I’ll of course note Aoi and his sometimes questionable statements about women (I think we can see why this guy isn’t seeing anyone), a fair point is made that Natsu’s mindset is something to be admired. She can turn something very distinct like a romantic relationship into a purely positive force. It doesn’t distract her or take away from her game at all, but rather it makes her better. Natsu really is enjoying playing the game she loves with the person that she loves. It’s just a win/win situation like no other. Seeing Maruo improve makes her want to get better and that just keeps things going.

You get to see that it’s not just Maruo who appreciates this. You can tell he’s over the moon about being with Natsu and wanting to be more like her. And it’s the same the other way. Natsu wants to be more like Maruo and in some ways she is getting there. Using her head a bit more and wanting to keep the winning going for the both of them. Plus it just leads to some entertaining moments in public when she and then he doesn’t think about what is going on around them. I’m sure many could look at them as a dumb couple, but nothing wrong with that XD.

I just love Natsu dropping the date bomb right before the match. It makes sense in a lot of ways to be surprising like that. Plus they did basically just get together so this is the first chance they’ll have for a date. Actually getting out there to enjoy themselves after isn’t a bad thing. They can enjoy what they are doing right now and look forward to what they will be doing later. I like that Maruo has changed a bit as well. Instead of just getting shaken up by a love mode, he kind of drifted into a positive ‘happiness mode.’ 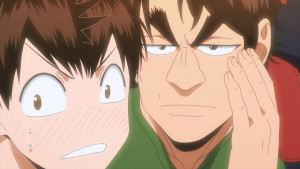 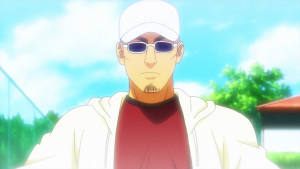 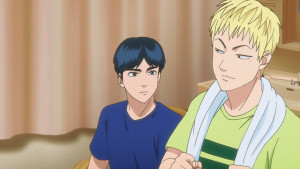 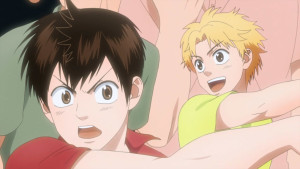 The big thing is that Maruo is starting the game basically in the zone. It makes sense, his mental state is just at the best condition here. He has less pressure because of already getting into the All Japan Junior, he has the exciting challenger condition going after Nabae, and things are going perfectly with Natsu. He could take a big lead early in this game if he can maintain this condition. It can’t last forever, but the longer it does the harder it will be for Nabae to get back into it. Nothing more worrisome than playing against someone at their best when they are already pretty darn good. Maybe if Nabae can survive this then the match will be easy, but staying ahead of Maruo like that will be difficult.

It was an interesting thing to find out that Nabae had an insane temper as a younger kid. Imagining someone worse than Araya early in the series is….scary. I mean damn just swinging that racket in a pissed manner is pretty unsettling. His coaching deserves props for holding up that anger and not giving up on him. Too much potential that could have been lost if her couldn’t control himself. Just important as well for Nabae’s thoughts on Maruo to remind us how much he’s grown. In the last match Maruo didn’t have his control or change of pace really defined. He was purely a guy who played basic tennis. He’d basically mastered that basic tennis, but it made him easy to break down. Things are very different now and it won’t be nearly as easy for Nabae. 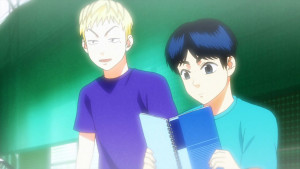 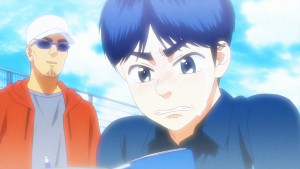 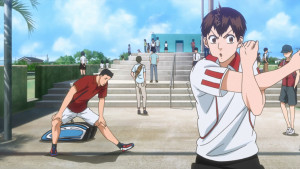 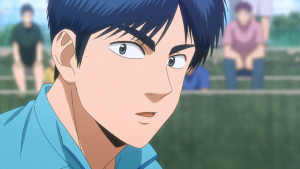 This was the first chance in a while for the show to just throw in a good amount of original content or at least expand on things. The flashbacks at least didn’t occur at this point in the manga and Takagi wasn’t there to discuss Maruo with Nabae either. It was mostly just a short monologue for Nabae. I think this kind of use of Takagi is a good thing. It gives someone for Nabae to bounce his thoughts off and lead into some backstory. I may not have liked him during his match, but at least he serves a good story purpose here.

It was interesting as well just seeing Nabae work so hard to control his temper. He really was worse than Araya. The guy he was playing in any match must have been worried this lunatic would charge over the head and attack him XD. Nabae was just a crazy kid who really had to force himself to change. He picked up that analyzing style in part on the path to controlling himself. I guess along the way he figured that if he could analyze his own play and control his emotions then why not his opponent? Focus on their style and emotions and find ways to play better against them. 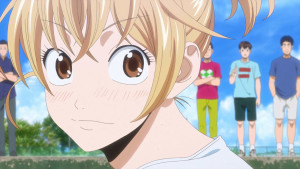 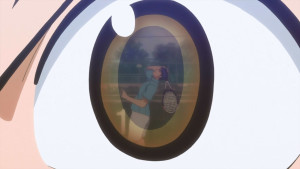 I really enjoyed this one. I know it didn’t kick off the Nabae match for more than a few points, but I still had fun. It’s interesting seeing where Maruo’s life is right now and how focused he is on chasing his goal. So much is coming together for him and he’s hitting all of that right at Nabae right now. No matter who wins this match you know both of them will grow tremendously from it. They’ll have a lot of data to work from now that they are closer in skill. I can’t wait to see how this match goes since it just won’t be the same as last time.
Score: A