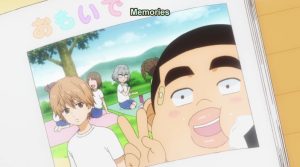 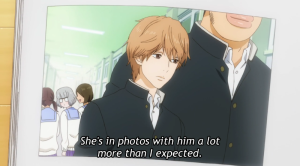 A new character joins the cast, possibly permanently (or as “permanent” as we can get with four episodes left, anyway), and she is… not boring, that’s for damn sure. As with most of OreMono’s story arcs, this one sets us up with a seemingly familiar character and story—the shy student watching their crush from afar—with a few key twists and acknowledgments along the way. I learned my lesson during the Mariya arc, so I’ll withhold any major judgments until we see more of this story play out. For now, though, let’s meet the new kid in town, and see how she interacts with and affects our (love) story.

So. Amami Yukika, the girl who’s been anonymously giving Suna chocolates since kindergarten. She’s a shy, socially awkward girl easily intimidated by traditionally “masculine” behavior (making her a sharp contrast to Yamato) and struggles to talk to boys because of it. This is also why Li’l Suna initially fascinated her, as his quiet, thoughtful demeanor stood out in stark contrast to the rest of the rambunctious kids (Takeo very much included). Then he went and protected her from a stray dodge ball, and it was all shoujo sparkles and bubbles from there. 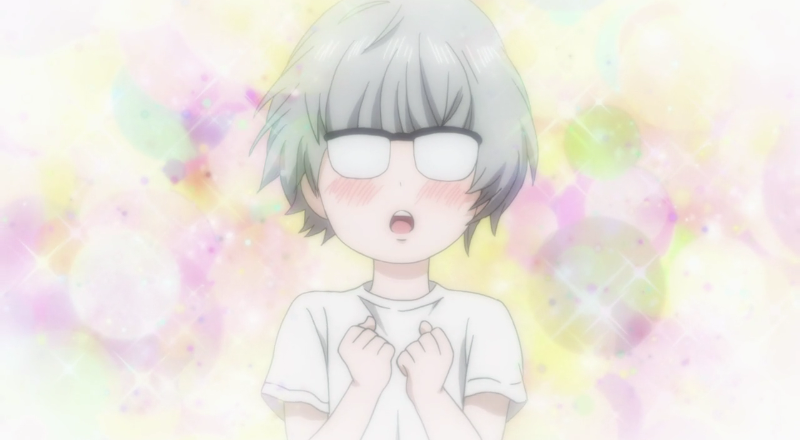 “Everything about him was perfect, and I fell in love instantly.”

But she could never get up the courage to approach him, so she just sort of… watched him. Often. For a solid decade. Which is, you know. Creepy. Amami definitely has a darkness to her, as demonstrated by her bath time fantasies and possessive, half-guilty hope that Suna will stay single forever. But she’s aware of it, at least—she calls herself a stalker and admits that Suna would probably be freaked out if he knew how much hovering she’s been doing—and I do sort of appreciate that the series isn’t trying to play her as some perfect, sweet little shy girl. Lack of communication is never a good thing in the world of OreMono, and Amami’s pining is very much a part of that.

It’s also… somehow… a little endearing? I know, I’m surprised to be typing that, too. While the general tone of the two stories is of course very different, Amami’s immature idealization of and infatuation with Suna reminds me a lot of Cecil’s epic crush on Carlos during the first year of Welcome to Night Vale—not just because both Suna and Carlos have perfect hair, but because the shows and their lovelorn characters manage to dance along that very fine line between unnerving and kinda cute. I’m sure a lot of people can relate to carrying a torch for someone, even to the point of obsession. OreMono takes that to fictional extremes, but the base feelings are all too real, making it easier to sympathize with the emotions behind the actions, even when those actions are… not always healthy ones. 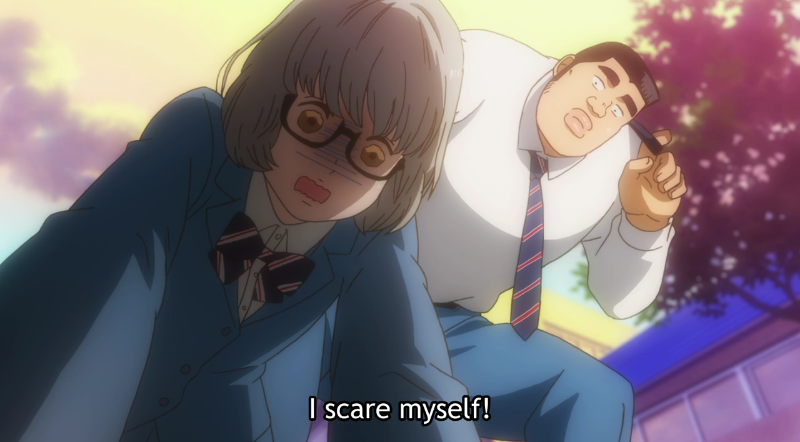 “And I hate and despair and love his perfect hair in equal measures.”

Mostly, though, OreMono keeps me from shrieking “Run, Suna, RUN!” because it doesn’t play Amami as someone who enjoys being a stalker. The whole reason she’s always hovering in the background isn’t because she wants to creep on Suna, but because she’s constantly trying to work up the courage to approach him and can never quite do it. She’s not happy with the situation and has a healthy amount of disgust for herself, which makes it work.

Er, sort of, anyway. At least enough that I’m willing to give her the benefit of the doubt and keep watching. We’ll see how OreMono develops her and Suna’s relationship from here. 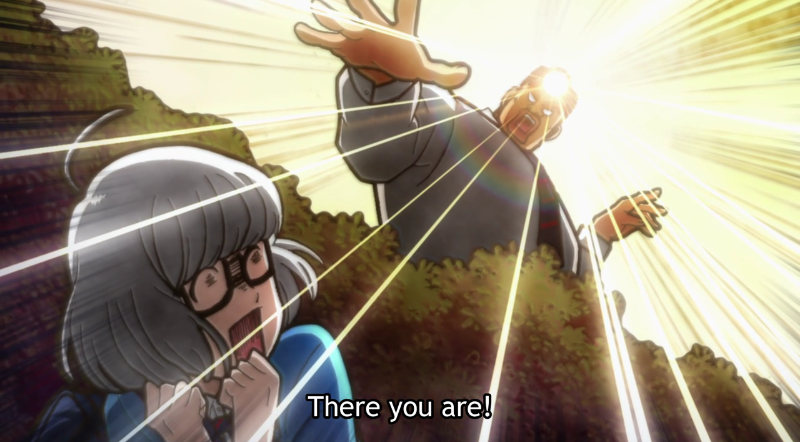 No creeping on Takeo’s watch, missy!

While the focus was technically on Amami and Suna, the events are (as always) filtered through Takeo’s perspective, and while no one explicitly mentions it, his reaction to Amami is really indicative of how much he’s grown in the year-ish since we meet him. Can you imagine Takeo trying to handle this situation at the beginning of the series, or even just a few short episodes ago, like before the Christmas party? It’d be brash, tactless chaos. That’s not to say he isn’t his usual friendly, clumsy self—that “THIS NICE GIRL GAVE ME DIRECTIONS, ISN’T SHE NICE” performance was vintage Takeo—but he’s much more conscientious and thoughtful than he was before.

There were little signs of his maturity throughout the episode, but the two that really stand out are, first, his conversation with Amami about “ideal” people. She talks about Suna as if he’s perfect because she’s only ever watched him from afar, and Takeo points out that, yeah, Suna’s a good guy, but he’s not an angel. He’s just a nice, normal person. 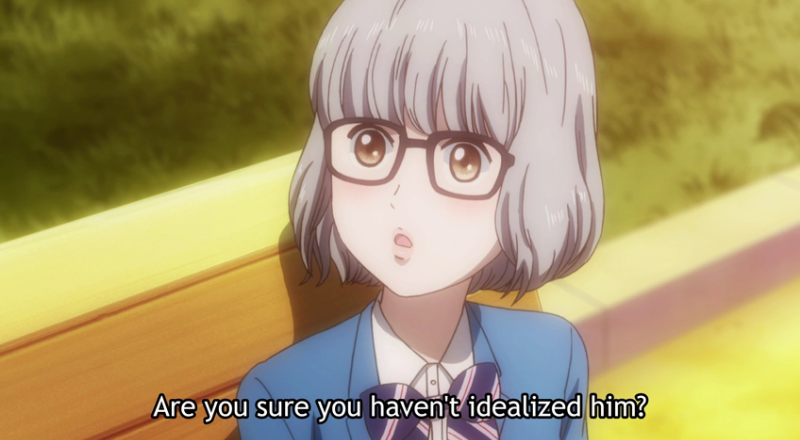 And lo, the writer reached through her character and quietly chastised the fandom.

Amami insists she isn’t—basically arguing that she’s adjusted her “ideal” to match Suna’s personality, warts and all, which doesn’t sound quite right to me or Takeo—but the fact that Takeo even brings it up shows that he’s paying closer attention to the people around him, and thinking more deeply about them as well.

On a similar note: Holy cow, you guys, Takeo actually took a moment to ask Suna what he wanted! When they’re planning the double-date to the zoo, he makes it a point to tell Suna that he’s allowed to say no—he doesn’t just have to go along with this to be nice or to humor them. It’s an understated moment, but I still felt like dropping some confetti and flying some balloons, because Takeo’s occasional bullying of Suna has been one of my few sore points in-series, and it’s great to see him acknowledging that and adjusting his behavior. Takeo’s always been a well-meaning, good-hearted guy, but he’s really coming into his own as an empathetic human being as well. It’s a big deal, even if OreMono itself doesn’t make a big deal out of it. 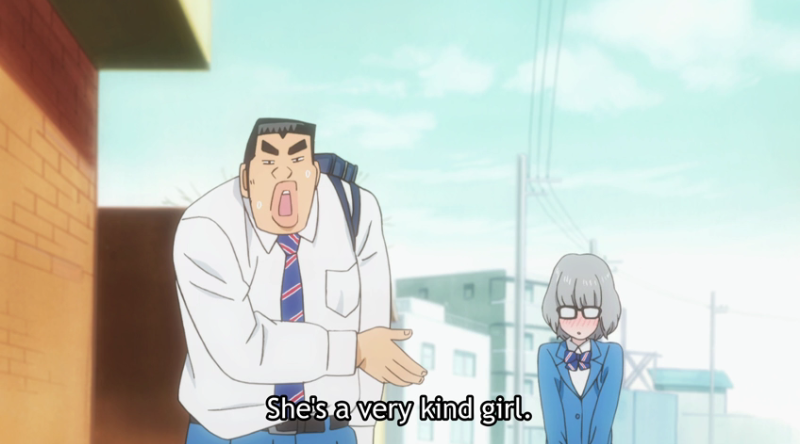 On the flip side of this conversation, Suna assures Takeo that if he really didn’t want to do something, he’d say so. There’s some interesting subtext (intentional or not) here, where we could almost see this moment as Takeo quietly apologizing for always dragging Suna along on this adventures, and Suna telling him there’s no need to apologize—he might not show it and he might even complain sometimes, but he doesn’t actually mind all the social outings. It’s a nice moment between friends, and just one more note in one of the show’s best love stories

As for this new love story… well, we’ll just have to wait for that zoo date to find out. 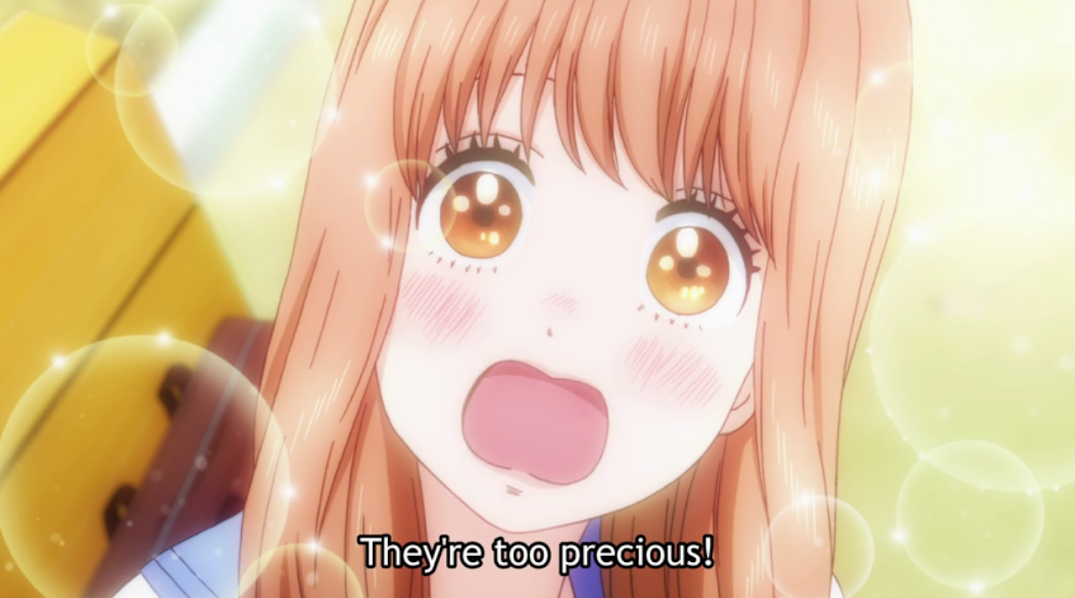