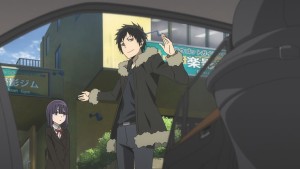 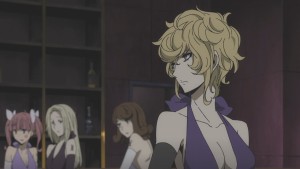 Now THAT is how you do an Izaya episode. Durarara!!x2, you sly dog, you’ve been holding out on me, haven’t you? Why didn’t you say you had a good solid episode full of intrigue, sharp dialogue and interesting twists laying in wait for me? And really… Why did it take you this long to finally give me what I’ve been craving since you started up again? 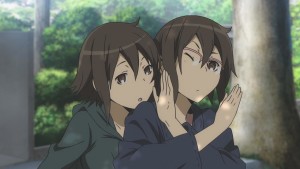 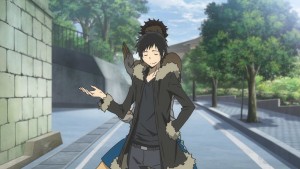 Seriously, that was one solid episode. If there’s an episode this season that’s reached the level of splendor, solid pacing, storytelling and writing of the first series, its this episode. Its almost fitting that the strongest episode to come out of this second series features Izaya, who also had the dubious honor of being featured in one of the worst episodes of the franchise ever, as well.

I really missed this, the tense and confusing thrill, the intricate storytelling that keeps you guessing till the end, before finally neatly resolving everything. Back in season one, there seemed to be a never ending cycle for the show, where it would introduce something interesting, resolve it and then move onto the next big thing. Rinse and repeat. With that approach, every week felt like it mattered, and each dose of Durarara!! was a finely crafted masterpiece of storytelling. 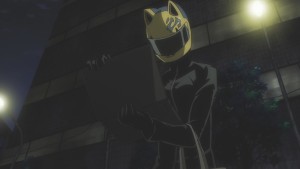 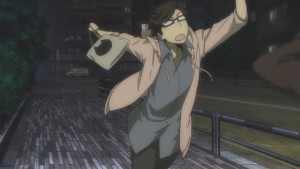 I liken everything we’ve seen up till now to Durarara!! kind of floundering, soul searching and experimenting with a  bunch of new approaches. It tried multiple simultaneous stories, it tried focusing on new characters, and it even tried smaller, contemplative traditional storytelling… and it failed. It failed rather miserably, with more misses than hits. But, thankfully, with this episode, the series went back to the basics, seeking to do what its done well in the past.

And as a fan of this franchise and the first series, that’s all I’ve been yearning for, from the get go. I mean… Lets take a look at this episode, and how effortlessly it did so many things RIGHT. 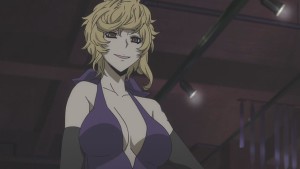 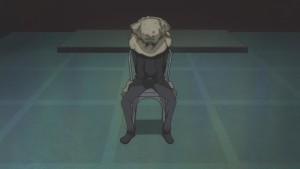 Thing number one, there was a very interesting and pressing conflict. The episode started in Medias Res, right in the middle of the story, where things were arguably most interesting. We saw Izaya tied up, in a chair, and being tortured. But was it Izaya? It certainly looked like him, but if you’ve followed the series before, you can’t even remotely imagine Izaya getting captured. And not only that, you can’t imagine him being as docile and quiet as the hostage was in that particular situation. Izaya, afterall, uses his words to both annoy his enemies, and get himself out of these kinds of situations. So right there, at the very start, we’ve got an intriguing mystery to mull over. What exactly is going on? As you wrack your brain trying to figure that out, boom…. Flashback!?

Which brings me to the second thing that is done exceedingly well in this episode, misdirection. Misdirecting the audience without making it feel cheap and unfair is something that is not exceedingly hard to do, but very rarely does it feel satisfying. And yet, Durarara!!x2 makes the whole affair look so darn easy this week. 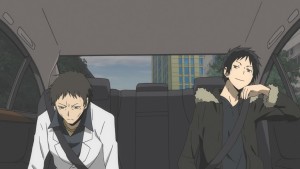 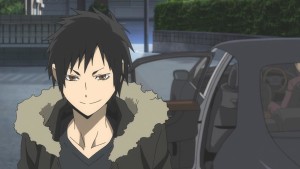 There’s misdirection with time, for starters. When we see Izaya and the Amakasu Group Kaichou Shiki talking in the car, we’re not sure if its happening in the past, or if its happening concurrently. And the mystery deepens, alongside the confusion. Durarara!!x2 makes you hunger for more and more information, giving you hints slowly. As the picture starts to clear, more questions arise.

The episode jumps around, to different characters, at different points in the story, and the way it does it is feels haphazard at first, but there’s a point and an answer to all the chaos in the end. Its with this scene frenzy that I think the anime is able to condense what is a myriad of events and story, and package it nicely in a palatable way. By the end, It all makes sense and looks exceedingly clever. 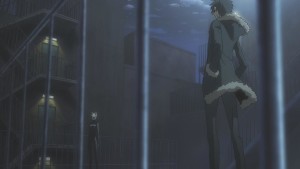 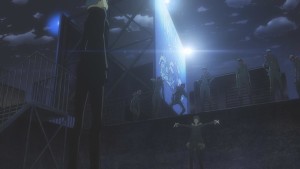 There’s the meeting with Izaya and Celty, for instance, which clues us into the fact that Izaya is planning something, and planing on using Celty for something but we have no idea where and when. There’s the car ride with Shiki, which clearly serves an exposition scene to feed us relevant information on the gang situation in Ikebukuro. If you recall from a few weeks ago, Akabayashi was very much investigating a locally pedaled drug called Heaven’s Feel and that ties into what Shiki wants Izaya to investigate, which is a Illegal gambling ring Amphisbaena. And of course, Heaven’s Feel is actually a secretive sub organization inside the Dollars, so it all ties into the larger picture.

And that’s the third thing. Durarara!!x2 also makes great callbacks to disparate plot threads and elements of the show’s larger universe, and ties them together beautifully. There’s an elegance to how everything that’s happening on screen both ties into what’s come before, and also gives us some subtle hints on what’s happened since then. 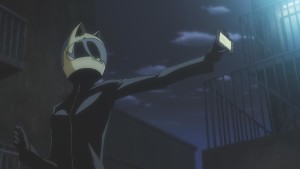 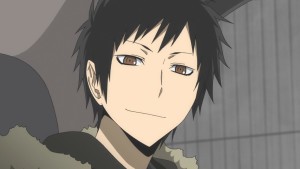 Shinra gets referenced, and it seems like he’s doing okay, with Celty searching for his assailant. And we all know that Izaya adopted the stalker fellow into his band of misfits, so he holds the cards there. Then there’s Shiki and Akabayashi, who clearly have their ideas and suspicions regarding Izaya and how he messed with Akane’s head. But none of them have the whole picture, or enough information to really nail Izaya or get what they want. Izaya holds all the cards, and manipulates everyone to his advantage.

Finally, the thing that seals the deal, a sort of antagonist in Izaya. Izaya’s always been a complex character, one that’s not outright evil, but he’s not a good person either. He’s pure chaos, who revels in twisting and jerking people around, and seeing what happens. He’s a mental player of the highest level, and its just darn entertaining to watch him juggle all the things he juggles, and get away with it. 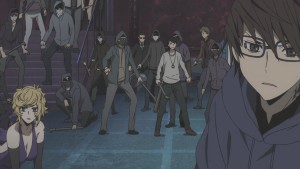 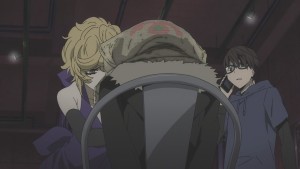 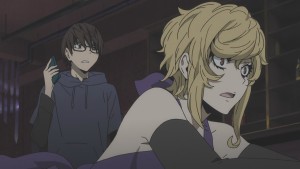 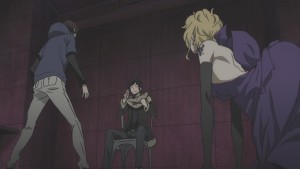 When Izaya’s in top form, man, he’s untouchable. In one single move, Durarara!!x2 and Izaya both pull the ultimate twist. That man in the chair? It IS in fact Izaya. The guy who’s been quiet and taking all that torture? Almost getting himself burned? Izaya. All along. Oh and its all part of his plan, and all to observe how Amphisbaena and Heaven’s Feel will react. The tables turn, and in one fell swoop, Team Izaya swoops in and takes out both groups in one go.

Beyond just being Izaya’s triumphant return moment, this is the first time we’ve seen team Izaya really cut loose and go to work. And I must say, while I loved Izaya as the solo force, manipulating things from the shadows, I think like him more when he’s got subbordinates and teammates, and when he takes a more active role himself. There’s just something truly menacing about what Izaya’s assembled here, and how he keeps everything from spiraling out of control. 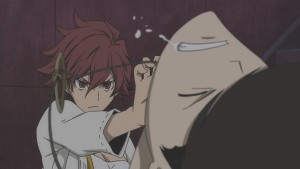 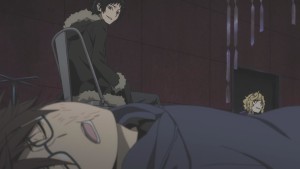 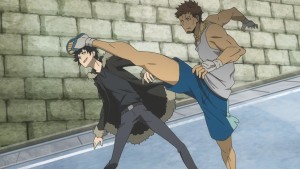 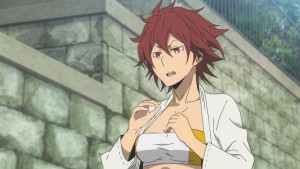 Its touched on earlier in the episode, but I’m really curious about Izaya and Mikage, and how Mikage ended up following him. From what little stuff we glean from Eichirou (Martial Arts dude has a name!), it seems like Izaya used his “slick words” to convince her to quite high school, but what else? I mean she’s clearly fine with beating up thugs for him too, so how does that work?

And then there’s Niekawa Haruna, The woman who’s broken free of Saika’s control twice, the original slasher, and who seems to be able to mind control people herself now. I’m not exactly sure how it works, but she’s just as much of a yandere now as she was when we first saw her. Her goal is to find “Takahashi”, whoever that is. I’m not entirely sure I remember who that is, but I suspect its come up before. In any case, she’s constantly nudging to get information on the guy, and nearly stabs Izaya himself. A tight rope to walk on indeed! 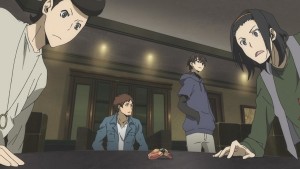 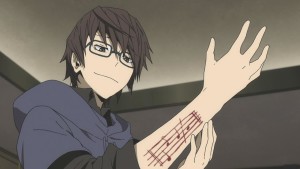 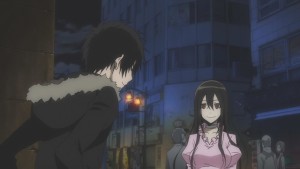 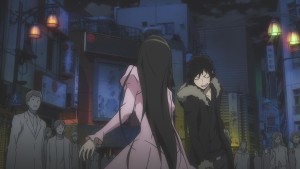 And so, with all of that, we have the Heaven’s Feel and Amphisbaena arcs get some resolution, with both of them more or less quashed for now. The immediate story feels complete, with Izaya and his gang victorious, and Amakasu and the rest of the groups clearly a step behind. But there’s setup for stuff happening in the future. Akabayashi and Izaya are destined to meet, so that should yield some interesting stuff, and there’s Kumoi-san. Kumoi’s the guy who’s behind Heaven’s Feel and feels like he’s almost the anti-thesis to Mikado’s group of bad apple purgers. And of course, there’s the ongoing plot of the Dollars, and the internal struggle there which ties in nicely to all of this.

I’d say, with this episode, things went from good, to darn great. I’m just astounded by how long it took for Durarara!!x2 to not only find its groove, but give us a truly satisfying episode like this one. Hopefully this indicative of the remaining few episodes of this cour, and the next, because it’d be heartbreaking to go back to the weaker aspects of this show again after we’ve made such progress. 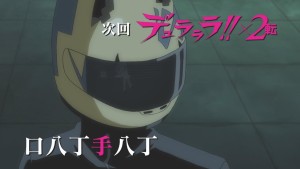 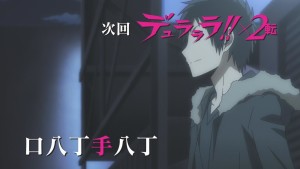 More Izaya? Wow, the show really is redeeming both itself and the character in a big way. I’m game, lets see where this takes us.