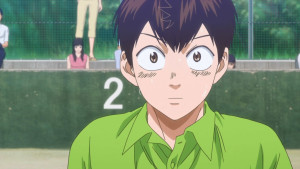 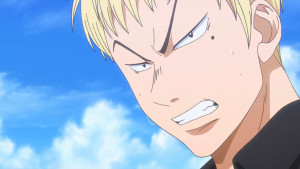 So that ends the match with Takagi. In the end it wasn’t the greatest showdown of all time, but it did push Maruo forward a bit. It is true that in his career he’s going to run into guys of that type. He may not run into people using that many cheap tricks, but there will be people that will try to shake him up or anger him. Being able to recognize that and figuring out how to deal with it is important. As well it was important for Maruo to realize that channeling anger isn’t exactly easy to do and it’s better to just let the anger dissipate. There may be people who can get better as they get angry, but probably it just wastes a lot of your energy and makes you play worse.

In a sense this was a really easy match once the second half hit. Maruo just cruised to an easy 6-2 win in that set. Once he had the advantage and was able to calm down the danger was gone. Takagi’s game revolved around people falling apart and getting that early advantage. But the moment Maruo took control, Takagi was the one who came apart. It turned into a match purely based on tennis skill and Maruo’s unpredictability really wasn’t something he could deal with. You got a good image of how utterly hard Maruo is to deal with once he’s on his game. How do you even prepare when you have no idea where the shot is going to go? 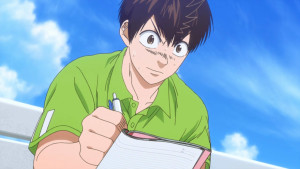 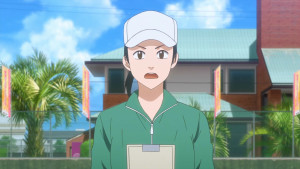 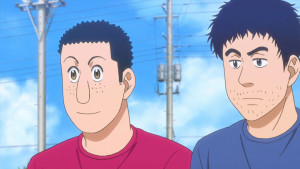 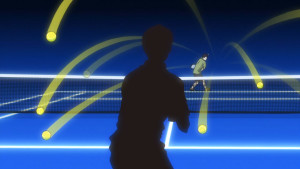 I can appreciate that they tried to bring Takagi back down from pure scum this week. Like a lot of Maruo’s opponents he learned something from all of this. Relying purely on tricks made him unable to keep up and his second biggest failing was focusing too much on Nabae. Nabae is a different person than Takagi. His strengths are different as well. If Takagi simply does what Nabae does in training (just more of it) then he’s not really making the most of his effort. A fair point was made by the coach here. There is a style of play and training that is suitable for Takagi, he needs to find that and focus on that. He’ll grow the most if he’s working towards something that fits for his mentality and physical ability. He played against someone who had found the right training regime and play style and the difference was obvious. Takagi had more stamina, but wasn’t or couldn’t take advantage of it. His stupid win against Nabae proved his stamina if nothing else.

The key for this match was Maruo figuring out how the heck to calm down. He tried to channel anger, but that just blew up in his face. It was a smarter move to take the warning and use all the time he had to calm the heck down. True that in a sense is abusing the rules as well, but it was a necessary step after all that Takagi had been doing. Taking almost 40 seconds to just breathe and relax made a huge difference. He could accept Takagi’s game and style as tactics. Once he could do that it was easier not to be angry. And at that point the match wasn’t really all that hard. Takagi’s strength was his ability to mess people up, in terms of skill Maruo had the absolute advantage. It is a reminder how mental states are key though, the most skilled person won’t always win depending on mental states.

The best part may have been the official just starting to call things against Takagi. I fully expected that at some point. When someone is pushing the rules and being a jerk on the court….it’s annoying to be an official of that match. She’ll call borderline things against Takagi because she herself is getting frustrated with this match. 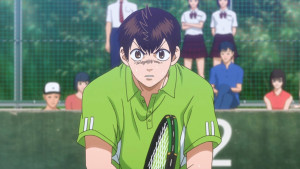 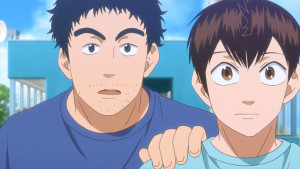 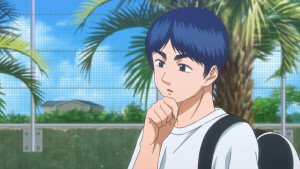 Maybe this explains why Nabae could put up with Takagi so much. He can respect his strengths in terms of stamina and see that his tricks had tactical value. Nabae is the type that will use everything to his advantage, but not lose track of the fact that he has to improve in a way that makes sense to him. I think for Takagi it’s better to just drop the tricks as much as possible since he may get too distracted if he tries to maintain those. Finding his own tennis style is much more important. And at least Takagi recognized that the ‘win’ over Nabae wasn’t really any kind of win. It was just an insane marathon match where he somehow managed to outlast him through pure stamina.

In the end Maruo came out on top and everything is pretty good. He got a nice lesson on the importance and ranking of mental states. It’s better to feel challenged, then pressure, then anger, and the worst being apathy. I can certainly believe that. Being angry is bad for playing anything, but being apathetic is worse than that. Just not caring gives you even less energy and effort. While on the other end feeling the challenge of a game and the excitement of facing a challenge is a good mindset to have.

In the end I’m just glad that Maruo didn’t fall to this guy. It would have been frustrating to see that happen. Now we are set for the next big match. Maruo vs Nabae! Let the rematch of the ages finally begin. It’s been a while since we saw these guys play last so it’s certainly fitting. Maruo can’t afford to be crushed like last time. He has to be able to play on Nabae’s level and overcome him or his dream won’t be accomplished. He can’t count on someone else beating Nabae at the All-Japan Junior. 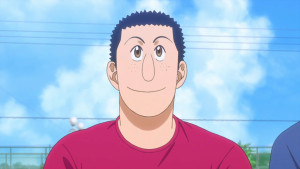 This was a better episode than last week if only because it had Maruo turning the tables. I’m looking forward to the semi-final match now. This could be as good as the finals with the skill at play here. Maruo managed to conquer the “Ide Block” and now he’s in the best 4 in a tournament that is much bigger than anything he’s been in before. He has finally arrived. No one is going to be able to ignore him after he’s come this far against really big players. Also just getting this far is key for the All-Japan Junior. He needed a good result and he has it. Getting past Nabae would just push that even further.
Score: B+