Have I ever mentioned how much I love this series? I love the contrast it exploits between fluffy moe and downright despair-filled responses, and I especially love not only the fact that they so effectively use the main bringer of the contemporary standard image of an “upbeat, cheerful genki spirit” as the main vehicle for tragedy and downright thought-provoking actions and responses to what has happened around them. And what’s more they do it in a way that works and engages the audience (viewers in this case) and gets them invested in the narrative and the things that matter. 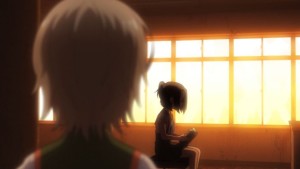 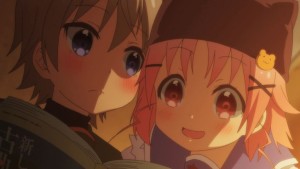 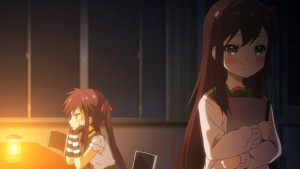 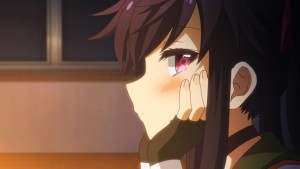 There are many mediums to present a franchise in these days – anime, manga, novels, video games, visual novels, live action movies (as opposed to anime movies), musicals (I am constantly surprised how many anime or manga adaptations are made into broadway style musicals), actual stage plays, mobage, trading cards, even tabletop role playing games, and the list goes on … and every person has mediums that “work” for them generally better than others, just as they have genres, directors, and so forth. For me the manga medium is the most effective on a general basis, and I invariably find myself more moved by the manga version of something. It is rare for me to come across an anime that I feel that packs the same punch as a manga I enjoy, and even rarer to find one that surpasses it (perhaps Mushi-shi or Natsume Yuujinchou might be candidates for this). Generally I find the anime adaptations are pretty good but don’t pack the same punch. But Gakkou Gurashi thus far is doing a positively excellent job for me, and in terms of effectiveness may be getting to the level of The World God Only Knows anime adaptations, which for me is very high praise indeed. 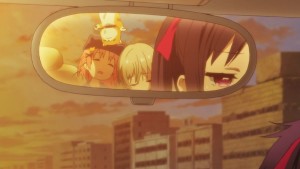 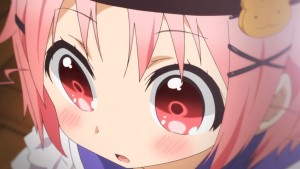 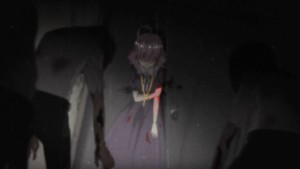 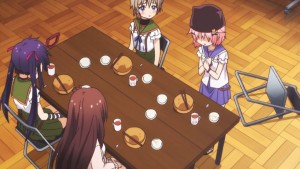 In this episode we not only finally got a clear answer (or did we?) on the fact that something horrible happened to Megu-nee – that the cross on the rooftop garden was raised in her memory and the ribbon around it belonged to her. I kinda doubt she is buried there (although from what I understand there are cases of people being buried atop buildings in Japan, interestingly) as the garden beds are likely too shallow – more likely than not she was either completely devoured or else zombified and wandering around somewhere. However, not only did Megu-nee meet a terrible fate, but she did it protecting the girls of the School Life club – while Yuki was screaming and crying and pleading with Megu-nee not to die through a closed door while being restrained by Kurumi and Yuri. 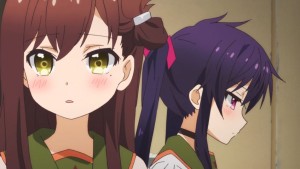 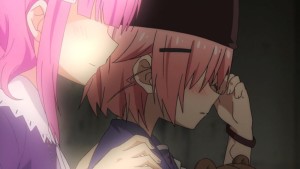 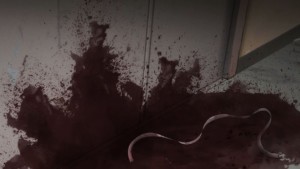 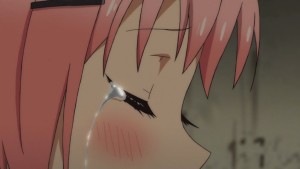 What is even more interesting in this episode is the teeny glimpse we are given into Yuki’s inner world that is perhaps the “closest to reality”. We see that after the zombie apocalypse took place Yuki was in complete despair (as if life were not already unpleasant enough for her before then – a shy, mocked, perhaps even bullied, awkward young girl who was a misfit and had no friends in class) and it was Megu-nee who formed the School Life club … perhaps primarily (though not solely) for Yuki’s sake. More than that, Yuki obviously came to love and treasure Megu-nee quite a bit before the latter’s terrible end. It also seems that Megu-nee’s gentle, motherly love and protection of Yuki was spread to both Kurumi and Yuri as well, and as of this episode it seems to Miki too. I especially liked how they showed that even though Yuki is in her delusional world she still feels scared at times and knows that “something is wrong” – she sees both that her memories are foggy and also that the other girls react differently to things than she does. Yet despite all that she still manages to put a smile on her face to cheer up her friends. Yuki indeed is struggling as she can at the moment. 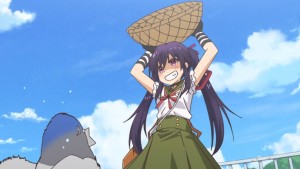 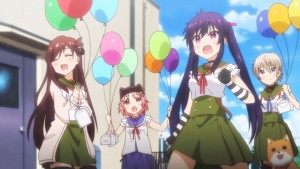 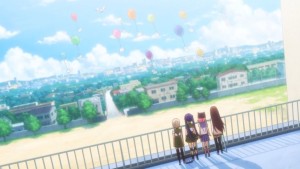 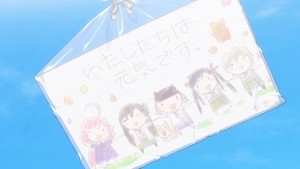 The episode ended on a positive note – and one I found kind of curious. It worked fine, yes, but with everything else going on I can’t help that sending out the letters via balloons and pigeon (good job Kurumi – you huntress you!) is actually much more important than we might think and that it is not “just” an upbeat note to end a rather serious episode on content wise. I would not be surprised if the key (at first I thought it was a car key) that was discovered among Megu-nee’s belongings may also come into play later on. Am very curious to see what the next episode will bring!

Also – as a curiosity some of the more observant viewers may continue to notice the gradual slight changes taking place in the OP. Here is a youtube video giving some examples by showing them all side by side:

Btw … thanks to Takaii from random c dot net for the screenshots again. Work has stepped up of a sudden and I do not have as much time of late (i.e. my usual laziness impacts me more than usual) XD.